The armored train “Baltiets” is firing at the enemy

Armored trains entered the history of our country primarily as heroes of the Civil War. Both reds and whites actively used railways. In total, during the Civil War on the territory of the former Russian Empire, the warring parties built and used four hundred armored trains in battles. During the war years, the young Red Army has accumulated vast experience in the use of armored rolling stock. This experience was later used already in the Red Army.

Armored trains have proven themselves well in providing fire support for ground forces, as well as in daring raids and independent combat operations in the strip of existing railways. By the end of the Civil War, the Red Army had more than 120 armored trains, not counting those that were sent to storage. By the time the Second World War began, armored trains had not lost their relevance, although their number had decreased. By June 22, 1941, the Red Army possessed about fifty armored trains, a third of which were concentrated in the Far East. A dozen more armored trains were at the disposal of the NKVD, these trains were part of the NKVD divisions for the protection of railways formed in the border areas.

Armored trains located in the western districts of the country, from the very first days of the war, took part in battles with Nazi troops. As the Soviet troops retreated to the internal regions of the USSR, new armored trains began to be created in the country, some of them went to the front already in 1941, as happened in the area of ​​Leningrad and the Oranienbaum bridgehead. On the bridgehead from autumn 1941 to January 1944 until the complete lifting of the blockade of Leningrad, two armored trains operated: “Baltiets” and “For the Motherland!”, Which supported the heroic defenders of the bridgehead with their fire for more than two years.

The first battles of the future armored train “Baltiets” 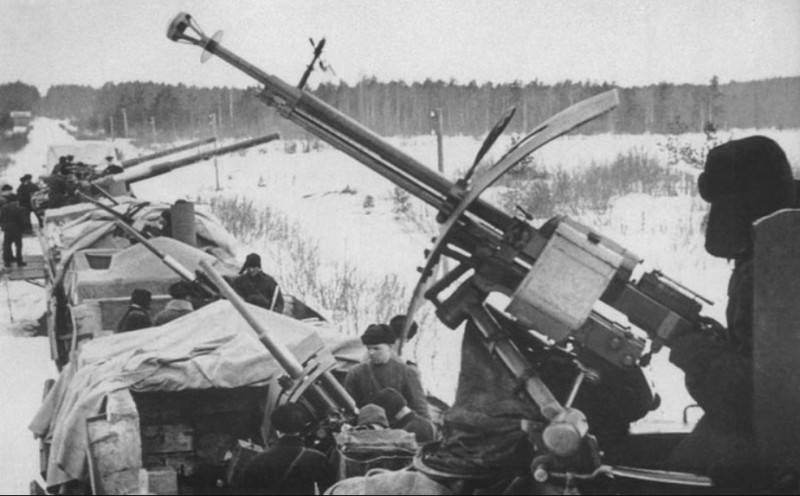 View of the armored platforms of the armored train No. 7 “Baltiets” KBF. 1942 year. The anti-aircraft mount of the DShK machine gun and the 45-mm 21K cannon with shields of the original design are visible, in the background there are platforms with 102-mm naval guns

With the beginning of World War II, the repair of the armored train was promptly completed, and the train received its first combat order on June 23rd. The command ordered to withdraw armored train No. 7 to the area of ​​Vindava station (Ventspils), where it was supposed to participate in repelling fascist air raids on the airfield located here. It is worth noting that air defense tasks in those days were very often assigned to armored trains. So from July to October 1941, six anti-aircraft armored trains were formed on the October Railway at once, each of which consisted of a steam locomotive equipped with an armored booth, and six armored platforms on which anti-aircraft guns and machine guns were located, as well as storage wagons and heating vehicles for personnel …

The future armored train “Baltiets” fought together with the troops of the 8th Army, participated in the battles near Liepaja, Jelgava, Riga, Tallinn. The armored train left the Baltic states in a deplorable state, breaking through the stations occupied by the Germans. Therefore, at first, the command was going to dismantle it, but in the end the decision was revised. In fact, only the rolling stock remained from the armored train – an armored locomotive of the OV series of type 0-4-4 with No. 431 (the famous “sheep”). Both armored trains, which broke through from the Baltic States, entered the Lebyazhye station (Fort “Krasnaya Gorka”), entering the Izhorsk sector of the coastal defense of the Kronstadt naval base (KVMB), the command of which decides to form two armored trains, strengthening their defense of the sector.

The armored train had to be repaired and brought back to life on its own in the face of a shortage of manpower, specialists and materials. The trains had to be restored as soon as possible, supplied with new artillery pieces, machine guns, recruited and sent back into battle. They decided to equip armored trains with high reinforced concrete sides. Specialists of the military workshop No. 146 (Bolshaya Izhora) worked on the arrangement of the bases of the platforms and mounts for the guns, the work was headed by the head of the engineering service of the Izhora sector, the military engineer of the second rank Zverev, as well as the head of the artillery sector – Major Proskurin. 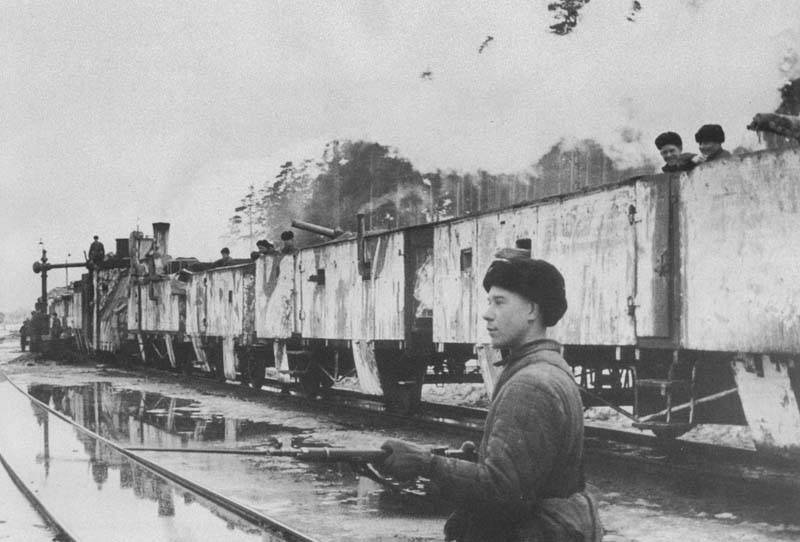 Armored train number 8 “For the Motherland!” Of the Red Banner Baltic Fleet at Lebyazhye station. 1942 year

Today, a few hundred meters from the Krasnoflotsk railway platform, now destroyed, you can still find the remains of slabs covered with various debris, which time has not spared either. These reinforced concrete slabs are the remnants of armored concrete cars built during the difficult months of 1941. The cut armor plates for two armored trains of the Izhora sector of coastal defense were provided by the workers of the Leningrad Metallurgical Plant. The gunners of the Krasnaya Gorka fort and the nearby coastal batteries helped with the supply of guns and their repair. In the port of Oranienbaum, the necessary reserves of cement were found, which were used to strengthen the reservation.

According to experts, the armored sites were covered with two sheets of 8-10 mm armor, which perfectly protected only from small arms, but not from shells. But at the same time, there was a ten-centimeter gap between the two sheets of armor, which was reinforced with concrete with reinforcement. It was this reinforced concrete structure that took on the main task of ensuring the survivability of the armored train. Alexander Senotrusov, an employee of the Fort Krasnaya Gorka Museum, notes that there were no analogues of such a construction of armored trains in the world. The armored train itself consisted of an armored locomotive, two platforms and four armored platforms.

To arm the armored train, two batteries were removed from the second northern fort – the 125th and 159th, both batteries of a three-gun composition. The batteries were armed with 21K universal semi-automatic 45 mm cannons mounted on pedestal mounts. In addition, units of the fleet allocated six large-caliber 12.7-mm machine guns, including 4 DShK machine guns and two DK, as well as 16 Maxim machine guns and three DP machine guns, to strengthen the air defense. The main armament of the armored train was two naval 102-mm guns with a barrel length of 60 calibers.

These guns produced by the Obukhov plant were installed primarily on destroyers and remained in service from 1909 to the early 1950s. The guns turned out to be very successful and were distinguished by high ballistic qualities, which determined the durability of their use and completion in small batches over the years. The practical rate of fire of the guns reached 12-15 rounds per minute, the maximum firing range was 16,300 meters (at an elevation angle of 30 degrees). For the defenders of the Oranienbaum bridgehead, armored trains with such weapons were a serious help. 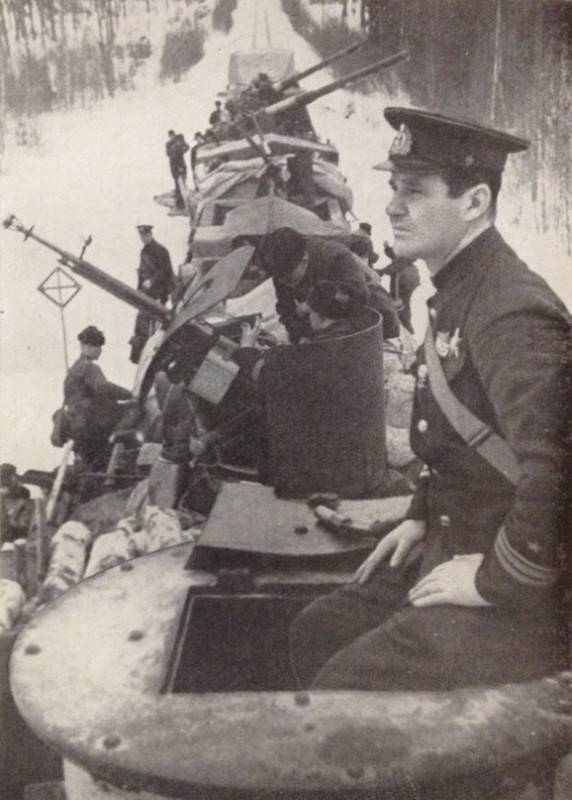 Moreover, on January 31, 1942, the armament of armored train # 7 was strengthened. At the end of 1941, by order of the Izhora fortified region, which is part of the KVMB, a new 60-ton four-axle open railway platform was attached to the armored train. On this platform at the end of January, after testing, a 130-mm gun was installed in a turret mount (stern), taken from the famous cruiser Aurora. The 130-mm B-13 gun with a barrel length of 50 calibers provided a maximum firing range of 25,500 meters. The rate of fire is 7-8 rounds per minute. By May 1942, the shooting of the gun will be about 30 percent.

By September 1941, armored train # 7 took part in battles and repelling enemy air raids. In early September, he took part in the shelling of German troops rushing to the coast of the Gulf of Finland. After the Germans reached the coast of the Gulf of Finland in mid-September and occupied the city of Peterhof on September 23, two armored trains restored in the Izhora sector were cut off along with the troops in the Oranienbaum area. The Germans believed that they had encircled a large group of Soviet troops here, calling the entire encirclement area a “cauldron”. However, the Soviet troops did not plan to lay down their arms.

Meanwhile, armored trains lost the ability to go to Leningrad for repairs. In August, they were already repaired several times at the Leningrad factories, eliminating damage received during enemy air raids. From mid-September 1941, they could only rely on local workshops located in the Oranienbaum area. 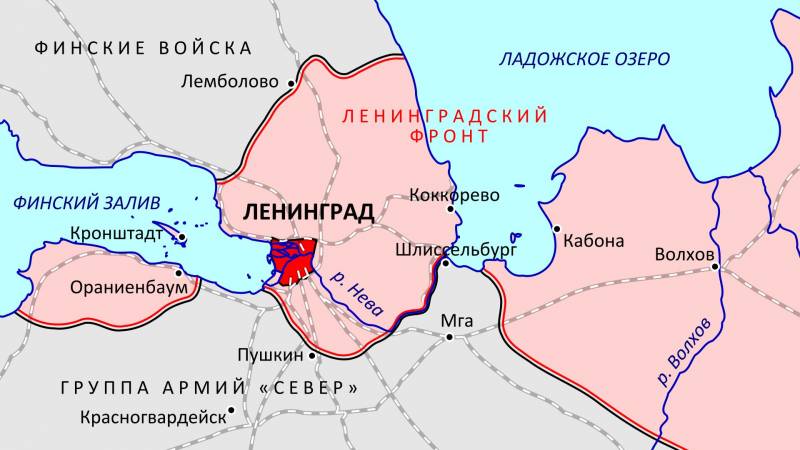 Front position near Leningrad on September 21, 1941

To provide armored trains with maneuverability on a relatively small bridgehead (maximum front length 65 kilometers, width 25 kilometers), 50 kilometers of railroad tracks were specially re-laid. We are talking about the construction of several new branches, as well as 18 new firing positions for armored trains. Their construction was carried out in the Oranienbaum area and west of the Kalishche railway station (today within the city of Sosnovy Bor). In order to minimize losses from return fire and possible air raids, armored trains went into position, carried out a fire raid on the enemy’s troops and defenses, which lasted no more than 20-25 minutes, after which they necessarily changed their combat position.

On January 23, 1942, by order of the commander of the Baltic Fleet, Vice-Admiral Tributs, armored train No. 7 for the valor and personal courage shown by the crew of the armored train in the fight against the Nazi invaders was named “Baltiets”, under which he fought until 1944. The second armored train of Izhora UR was named “For the Motherland!” It is worth noting that two armored trains with the same name operated near Leningrad. The second armored train, “Baltiets”, fought in the encircled Leningrad as part of the troops of the Leningrad Front. Its main difference was armored cars equipped with two turrets taken from KV-1 tanks, which were produced in a city besieged by the enemy. 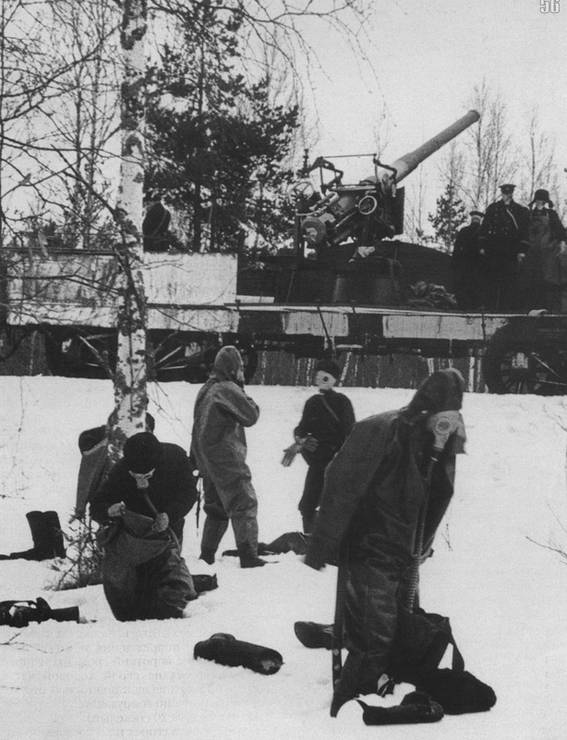 Anti-chemical defense training for the team of armored train No. 7 “Baltiets”, 1942

In total, during the years of the Great Patriotic War, the armored train “Baltiets”, which fought on the Oranienbaum bridgehead, conducted more than a hundred combat exits to inflict artillery strikes on enemy troops and communications, opening fire on the enemy 310 times. According to rough estimates, only in the first year of its activity at the front, about 5 thousand enemy soldiers and officers were destroyed by the fire of the Baltiyets’ guns, 13 artillery and 23 mortar batteries were destroyed, 69 dugouts were broken, as well as 32 different vehicles with enemy infantry, two were destroyed. enemy tanks, 4 planes were shot down, 152 houses with firing points equipped inside were destroyed, and 4 command posts and 4 enemy ferries were destroyed. During the war years, on a small defended heel of the native land, the armored train covered about 15 thousand kilometers.

On September 4, 1944, the armored train that had served its purpose began to be disbanded. On September 7, all the remaining artillery and machine-gun weapons from the “Baltiyets” were sent to storage.