It should be noted that interest in anti-material rifles is returning in many countries. Ukraine is no exception. For the second year in a row, the local company Snipex pleases the arms community with large-caliber novelties of its own design. Last year, the company’s engineers presented the T-Rex anti-material rifle, which was the direct heir to the famous PTR of the mid-20th century. A rifle chambered for 14.5×114 mm could rightfully be called the successor of the Dragunov (PTRD) and Simonov (PTRS) anti-tank rifles. In 2020, the company introduced another novelty in the same caliber – the Alligator large-caliber rifle.

The Snipex company and brand appeared quite recently, it happened in 2014. Organizationally, Snipex is a part of the large XADO-Holding company from Kharkov (stylized spelling XADO). Initially, this company specialized in the production of engine oils, lubricants, oil additives and automotive chemicals. The development and production of large-caliber high-precision small arms in Kharkov came relatively recently. However, over the past six years, the company’s designers have already presented several models of large-caliber sniper rifles. The first of which were the Snipex M75 and M100 models, chambered for 12.7×108 mm. The rifle can also be presented in NATO caliber 12.7×99 mm. The declared effective firing range for the Snipex M models was up to 2300 meters, depending on the barrel length.

However, the enough running caliber of 12.7 mm seemed to be insufficiently powerful for the Kharkov designers. And already in the last couple of years, models of anti-material rifles chambered for 14.5×114 mm have been presented on the market. Some Russian weapons publications indicated the effective firing range of new rifles at 3000 meters, but the manufacturer’s official website gives a much more modest value – 2000 meters. At the same time, the maximum flight range of a 14.5-mm bullet is impressive in any case: 7000 meters. 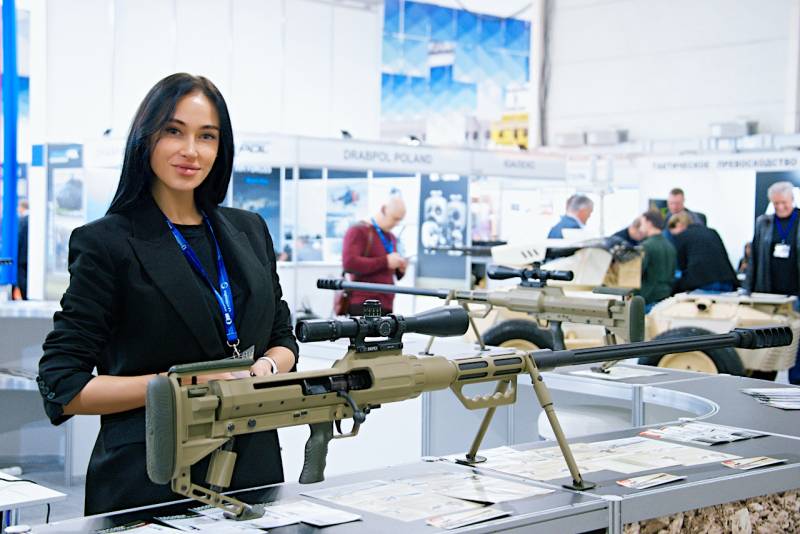 The caliber chosen by the Kharkov company evokes direct associations with the most famous Soviet anti-tank guns of the Second World War. The first model in the “anti-tank” caliber was the T-Rex rifle, a demonstration model of which was first shown in Kiev at the “Arms and Security” exhibition in 2017. It was a single-shot large-caliber sniper rifle with a sliding bolt action, made according to the bullpup scheme. A distinctive feature of this anti-material rifle is the fact that it was originally developed taking into account the requirements for weapons for high-precision shooting.

The next step of rifles under the Snipex brand was the Alligator large-caliber sniper rifle, in which all the ideas embodied in the T-Rex model received a certain development. The main difference between the Alligator and its predecessor is the transition to multiple charges. This model of small arms received a magazine for five rounds.

Like all models of anti-material weapons, Kharkov rifles are designed to defeat manpower, as well as enemy equipment. With their help, you can effectively hit stationary and mobile targets, including lightly armored ones. The 14.5 mm caliber contributes to this. Such weapons can pose a serious danger to all wheeled army equipment, as well as classic Soviet armored personnel carriers and infantry fighting vehicles.

Features of the anti-material rifle “Alligator”

Anti-material high-precision rifle “Alligator” is a classic example of “bolt” small arms with magazine feed of cartridges. The magazine-fed rifle, unlike its predecessor T-Rex, provides an increased rate of fire. The presence of a removable box magazine designed for five cartridges of 14.5×114 mm is the main distinguishing feature of two large-caliber sniper rifles developed in Kharkov in recent years. In this case, both rifles with a sliding bolt have a large number of common structural elements. 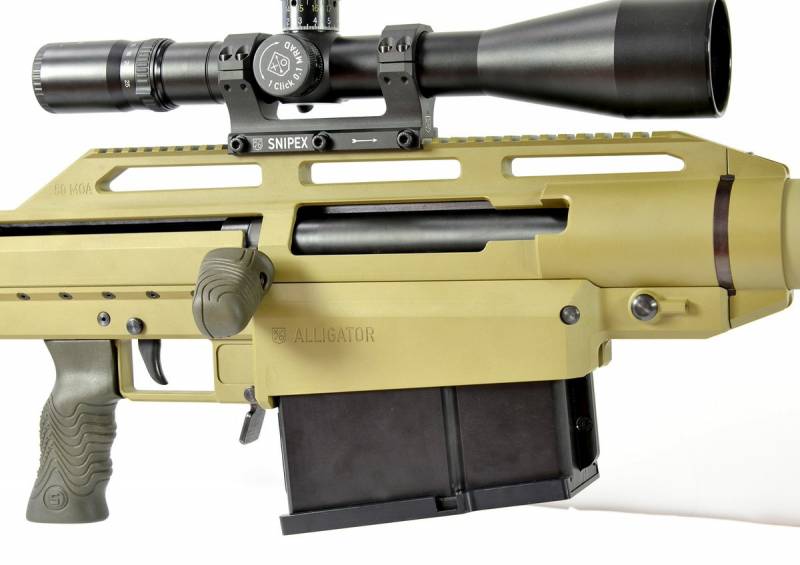 The receiver of the Alligator anti-material rifle is made of steel, while the guide surfaces of the bolt in the receiver are chrome-plated, the chamber and bore of the rifle are also chrome-plated. On the upper part of the receiver, the designers provided a place for the installation of a Picatinny rail, while the guide bar received an inclination angle of 50 MOA, which hints to us that the rifle is designed for long-range shooting. The rifle also received a reliable push-button fuse.

With a total weapon length of 2000 mm, the rifle barrel length is 1200 mm. The barrel of the weapon has 8 grooves with a pitch of 419 mm. The total weight of the rifle without a magazine with cartridges is 22.5 kg, the same weight as the previous model T-Rex. The rifle is equipped with a five-shot box magazine chambered for 14.5×114 mm cartridges, while the magazine itself has two attachment points: a front forked hook and a rear latch lock. The initial bullet velocity is 1000 m / s, the effective firing range is 2000 meters, the maximum bullet flight range is 7000 meters.

The designers from Kharkov initially developed the Alligator anti-material rifle with a fit for the requirements for high-precision weapons. For this, the following design solutions were implemented in the model: a movable barrel, a balanced rifle weight, a rubber butt plate, a massive muzzle brake-compensator. Also, to facilitate shooting from weapons, the model is equipped with bipods, which are adjustable in height and have four fixing positions. For convenient transportation of weapons, the bipod can be folded. In addition, the rifle is equipped with a carrying handle with the ability to change its position. The overhead carry handle is designed to carry the weapon directly to the firing range. For convenient transportation of weapons, the shooter can use a fairly compact case in which the rifle is placed after detaching the barrel.

For the convenience of the shooter, the rifle has a height-adjustable cheek rest, which, if necessary, can be easily rearranged to the right or left relative to the axis of the anti-material rifle. Also, the stock of this model is equipped with a rear support of a special design (monopod), which provides the shooter with the ability to fine-tune the position of the stock for himself and contributes to reliable fixation of the weapon. Cheek and butt pad, as well as all handles are made of special modern models of wear-resistant polymer materials.

The manufacturer did not disclose the accuracy specifications of the new rifle. But earlier in various media it was possible to find information on the previous model T-Rex, for which the declared accuracy of fire was less than 1 MOA (diameter up to 30 mm at a distance of 100 meters). It is curious that the manufacturer gives a three-year warranty on its product, while promising to provide prompt technical support for the model throughout the entire life of the weapon.