And it all started with these peerboxes! Before us is a .31 caliber peperbox with four barrels and primer ignition, model 1857

Weapons and firms. And it so happened that when I was working on a series of articles devoted to carbines of the era of the Civil War in the United States, I saw, among others, the Allen and Willock carbine, as well as the patent for the cartridge for it. And I did not begin to insert a block about this into the text then, because they produced not only this carbine. As it turned out, they had a firm and a very solid one that produced many different types of weapons. So, on reflection, I decided that there is a place for the material about their weapons in the series of articles “Arms and Firms”. In any case, it is more logical than “cutting their history” into separate materials and inserting them into articles about carbines and revolvers. As a result, today we will get acquainted with the history of this interesting enterprise and with many examples of small arms produced by them. 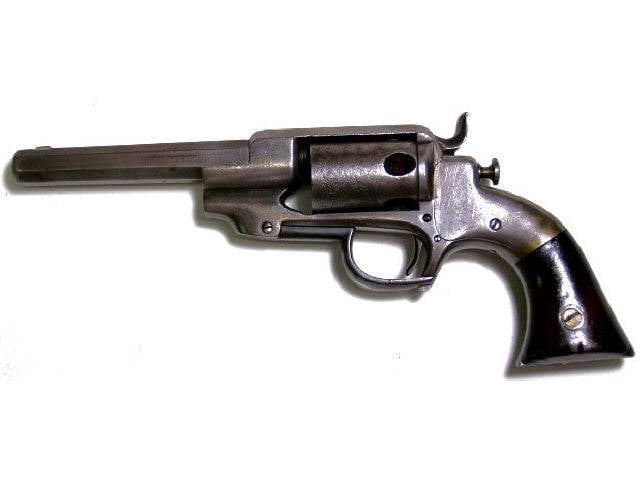 .28 caliber five-shot capsule revolver with side trigger and faceted barrel. On this model, the lever, combined with the trigger bracket, actuated the pusher of the bullet’s tight drive into the barrel.

How much can be done in eight years?

To begin with, Allen & Wheelock existed in the US small arms market for only eight years – from 1857 to 1864. And despite this, she managed to produce a surprisingly large number of different types of firearms. Their products included single-shot, double-barreled, four-, five- and six-shot pepperbox pistols; single-barreled, double-barreled and revolving rifles, both muzzle-loaded and from the treasury; and over 20 models of revolvers in more than a hundred variations. And among them are five models of shock revolvers, as well as a revolving carbine. All of these designs were based on various patents granted to Ethan Allen.

And he received 22 patents for various types of firearms, five of which related to percussion revolvers. However, the very first one (No. 3998 dated April 16, 1845) was issued not for a percussion revolver, but for a perbox. His double-action mechanism, in which the trigger was raised and lowered, and the barrels rotated with one pull of the trigger, was an improvement on his 1837 patent, which applied only to single-shot pistols. The rotation mechanism was very simple: a lever was attached to the side of the trigger that acted on a ratchet at the rear of the cylinder. Many manufacturers of percussion revolvers have subsequently used variations of this design. 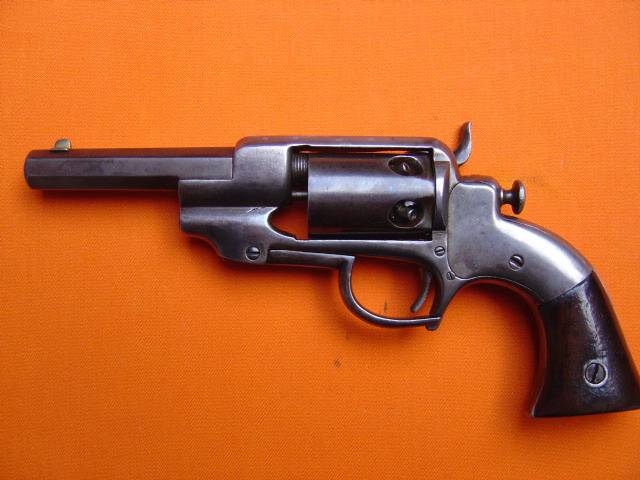 A more typical .31 caliber revolver for Allen and Willock with a side trigger. Barrel length – four inches

Other patents for Allen’s revolvers concerned changes in the mechanism and the addition of a trigger guard, which he turned into a loading lever (# 16367 of January 13, 1857 and # 18836 of December 15, 1857). He also added a square projection on the front of the cylinder to divert the propellant gases away from the drum shaft and thereby prevent clogging of the revolver mechanism (No. 21400 dated September 7, 1858). 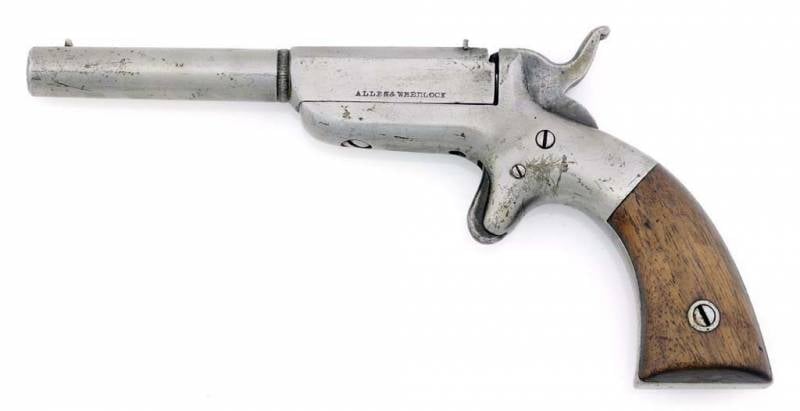 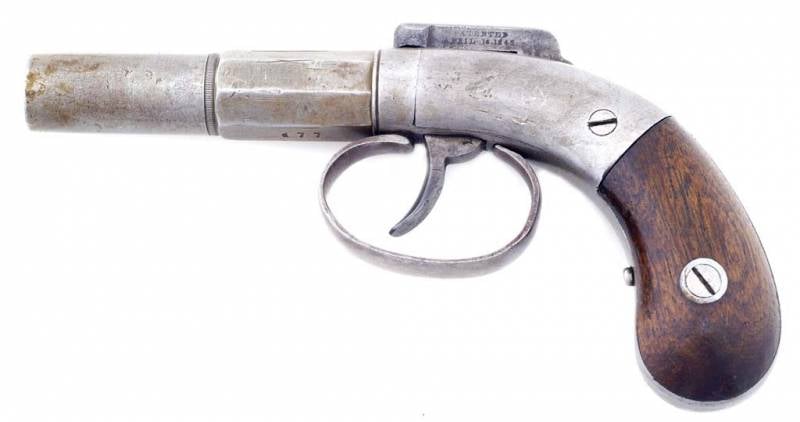 And these (caliber .36) also produced

Ethan Allen also produced single-shot pistols and re-boxes for nearly twenty years before Thomas Prentice Willock became his partner. A very important event coincided with the creation of the new company Allen & Wheelock: the diversification and expiration of the Colt patent, which allowed the partners to produce also capsule revolvers. The first types were intended only for shooting at the closest range, since they did not have sighting devices. 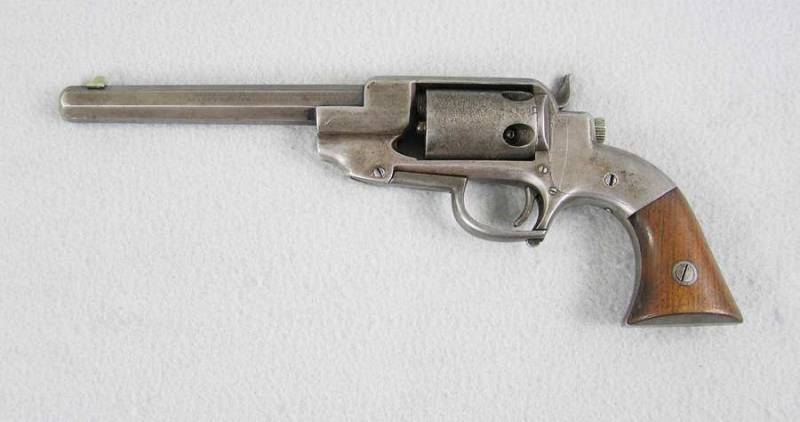 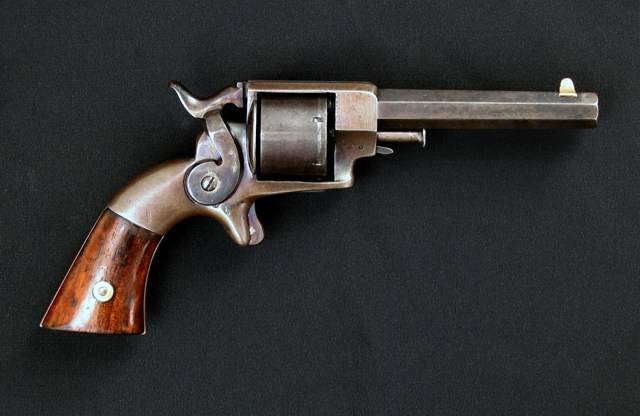 Revolver for “sidefire cartridge” and with “nipple trigger”

Two models of double-action pocket revolver were made: with a large frame and a small frame. The large bezel revolver was a 5-round .34 caliber with octagonal barrels ranging from three to six inches long. The first 400 revolvers or so came with a threaded cylindrical pin and a screwdriver slot at the front end that screwed it into the frame under the barrel. Starting with serial number 450, the cylinder pin has been replaced with a regular sliding pin held by a screw passing through the bottom of the frame in front of the trigger guard. In total, about 1,000 copies of this type of revolver were produced. Those with a long frame were marked with ALLEN & WHEELOCK on the top of the frame and PATENT 16 April 1845 on the left side of the trigger. The short-frame version has the inscription ALLEN & WHEELOCK WORCESTER, MASS. / ALLEN’S PATENT April 16, 1845. was placed on the left side of the trunk. The decor of both varieties featured an engraved scene of deer and dogs. The engraving on the Allen & Wheelock revolvers was very deep and therefore held up much better than any other American primer revolver. 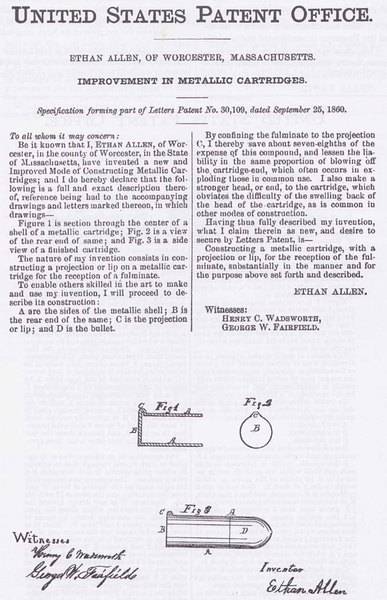 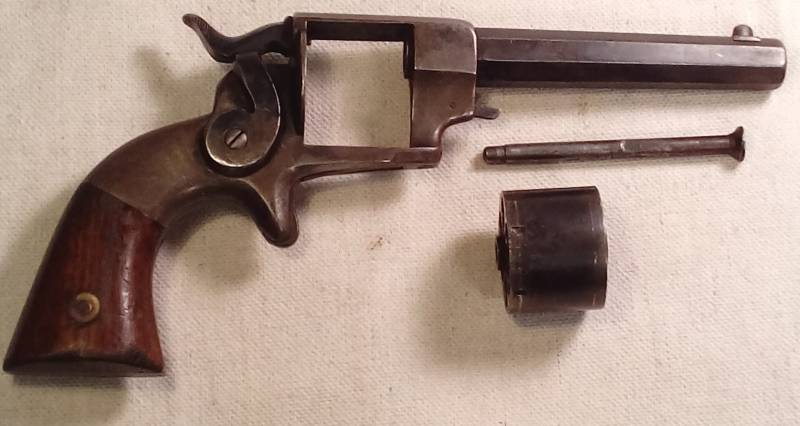 Allen & Willock’s 1860 .32 revolver chambered for side-firing, side-firing, six-shooter and four-inch barrel. The photo shows the axis of the drum and the drum itself, removed from the revolver 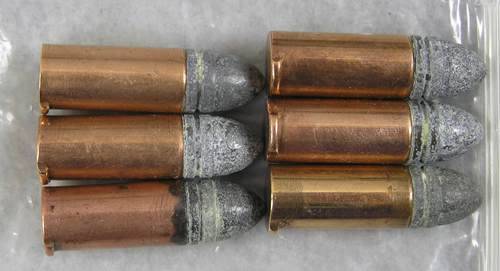 The dual-action pocket revolver models also had a five-round drum, but in .31 caliber with an octagonal barrel ranging from two to three inches long. The drum scene has been changed. Now it depicted two deer and three ducks swimming on the lake. About 1,000 of these revolvers were manufactured.

Next in production for Allen & Wheelock was a side-hammer revolver to the right of the barrel. Four different sized frames were made to match the caliber, and also two options for each frame size, with differences in side panels, loading lever latch and markings. The first version had a side friction latch for the trigger guard and a side plate on the left, extending down the side of the case. They were marked with ALLEN & WHEELOCK on the top of the barrel and ALLEN’S PATENT JAN. 13, 1857 on the left side of the trunk. The second version had a spring-loaded latch for the loading lever mounted on the rear of the trigger guard. They were marked with the words ALLEN & WHEELOCK WORCESTER, MASS.I ALLEN’S PATENTS JAN. 13, 1857, SEP. 7, 1858 on the left side of the trunk. It has been estimated that fewer than 100 revolvers of each caliber .28, .34 and .36 and 250 early revolvers of .31 caliber were fired. About 1,000 revolvers in calibers .28 and .31 and 750 in calibers .34 and .36 of the later type were also produced. They all had many small differences, but also many common features: octagonal barrels ranging from two to eight inches long; screw-in drum axle into the frame at the back; and deep engraving on the drum depicting a forest and various numbers of deer. 36 caliber models were all six shots, while smaller side hammer models were five shots.

The third model was an Allen & Wheelock revolver with a center trigger. The magazine axle mount has also been moved to the front of the frame. Such a revolver was produced in two calibers: the army .44 and .36th. 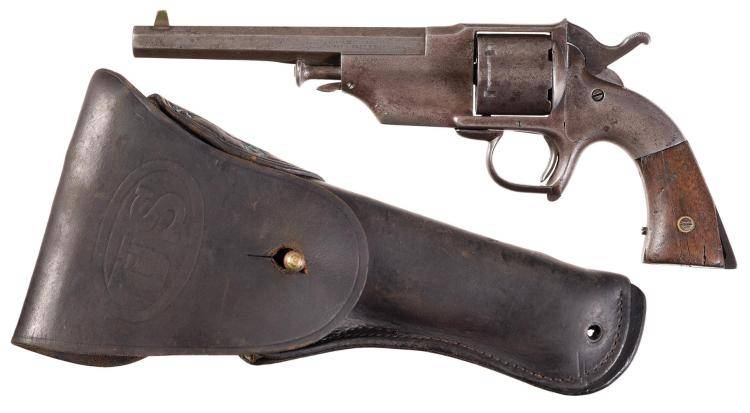 “Army model” and holster to it 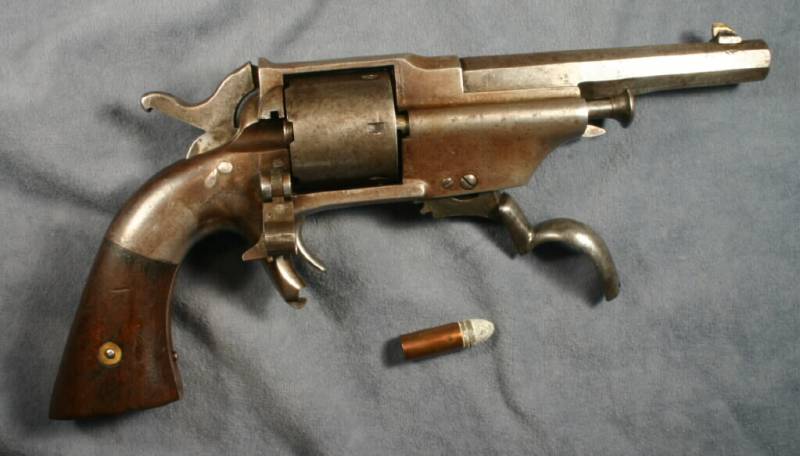 “Marine” revolver and a cartridge for it

Both had six rounds and barrel lengths ranged from four to seven and a half inches for the Navy model, the most common being six inches. All army .44 calibers had barrels seven and a half inches long. In total, about 700 army and just over 500 naval revolvers were produced. During the Civil War, the US Artillery Administration purchased 536 .44 model revolvers with a median hammer. The first 198 were purchased from the William Read & Sons of Boston on December 31, 1861, while the rest came directly from the Allen & Willock firm. 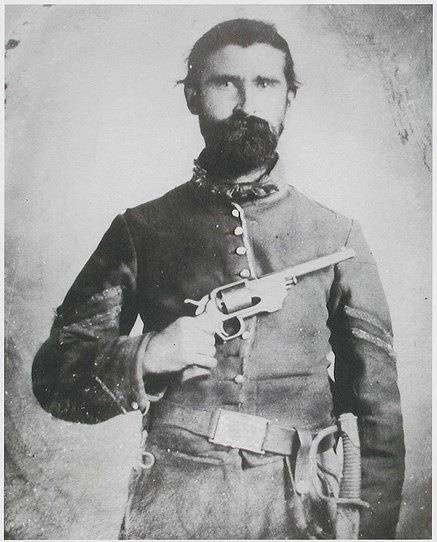 There is also a known police model of the Providence Police, the fourth model of a percussion revolver created by Allen & Wheelock, but for some reason there is no manufacturer’s stamp on it, although all the design features (for example, reflected in patent No. 21400) are present. Due to the lack of markings, some officials even claimed that the company never produced this revolver, although it is known that more than 700 copies were made. It was a compact and well-made pocket revolver, but production was discontinued when Allen & Wheelock began manufacturing cartridge revolvers. 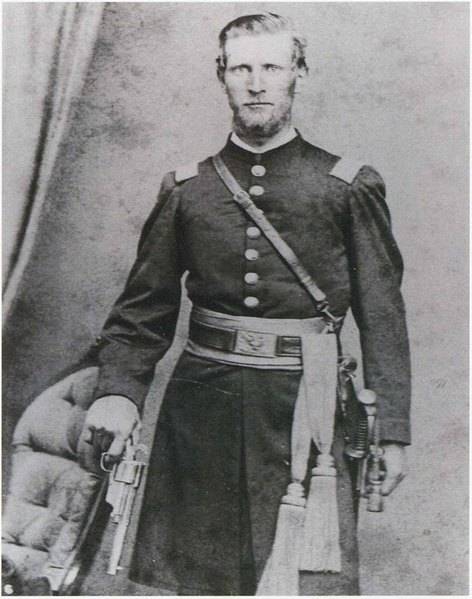 US Army officer with Allen & Willock .44 revolver. (Institute of Military History of the United States Army)

By the way, an experimental type of revolver rifle with the same body size as the .44 caliber median hammer revolver was produced in very limited quantities (even less than 20 pieces). Although in total, over eight years of existence, Allen & Wheelock has placed a total of more than 8,000 of its products on the percussion revolver market. 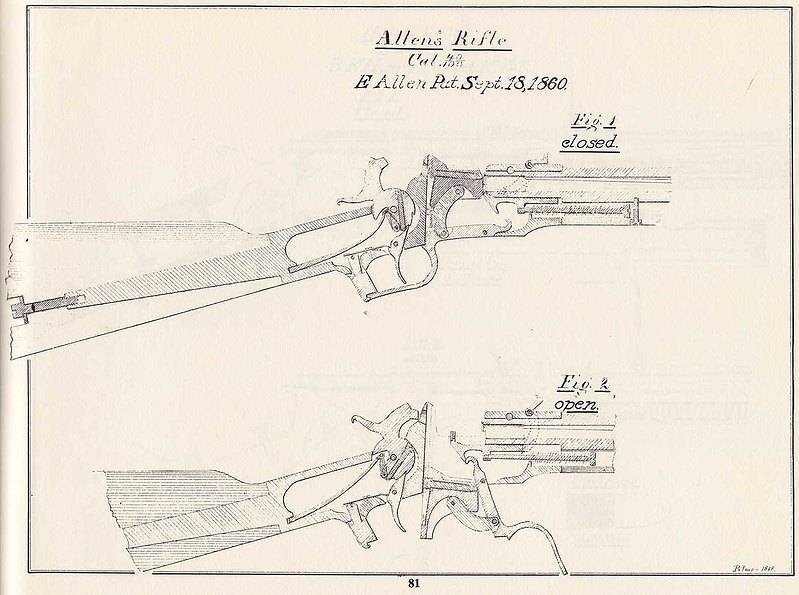 Diagram of Allen and Willock’s rifle with a retractable bolt

The design of the cartridge revolver was patented in the fall of 1858, and it was mass-produced by Allen & Wheelock in Worchester, Massachusetts. In total, about 250 of these revolvers were produced and another 500 with an extended barrel (intended for the US Navy) were made to order. The production of the revolver ceased in the mid-1860s, it was replaced on the arms market by technically more advanced revolvers from other manufacturers, in particular from Smith & Wesson. 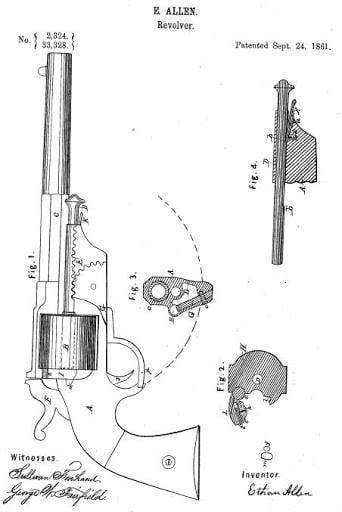 Diagram of the action of the discharge device, actuated by the trigger bracket

The firing mechanism of the Allen & Wheelock cartridge revolver was a single action, monolithic frame. For reloading, a special window was opened on the right side of the drum, and when the spring-loaded extractor was pressed, the sleeve that was opposite the window was ejected. Then, turning the drum, all the others were removed. Moreover, in the early, first sample, the door hinges were on top, and in the second – from the bottom (as on the marine model, which is considered the third sample). For firing from the revolver, special cartridges were used – the so-called “side-firing cartridges”, which did not have a primer as such, but on the side of the bottom there was a ledge with a powder-flammable composition. When loading the revolver drum with cartridges, it was necessary to orient them with this protrusion outward so that when the trigger was hit, it would hit it. The sight is open, unregulated, the handle of the revolver had walnut cheeks.

Approximately 700 of these revolvers were manufactured in the years 1861-1862. 198 units were purchased by the US Department of Arms for $ 22 each.

Revolvers were used in the 2nd and 3rd Michigan Volunteer Infantry Regiments and in the 8th Pennsylvania Cavalry Regiment.