All the newest and most technologically advanced goes to the military. Technologies that have proven themselves in the military are gradually being mastered by the civilian sector. This was the case, for example, with jet and rocket engines. However, in the case of flying cars and drones capable of moving people, the logic failed. In recent years, serious corporations and unknown startups have assured the naive public that flying taxis are about to appear in the sky. The new type of transport in theory and in computer animation gave users simply unlimited freedom and mobility. But it’s 2020, and the promised electric drones (as well as manned vehicles) scurrying across the sky are gone. 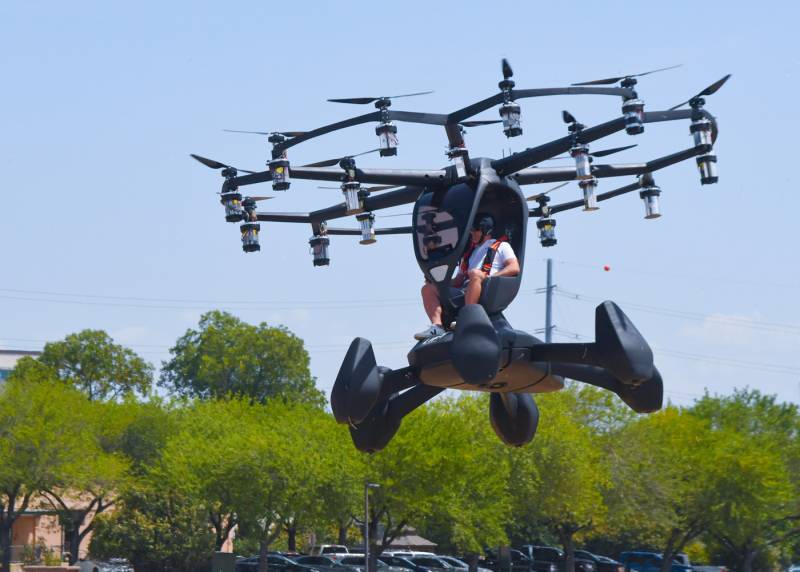 Shuttle “Hexa” in front of the US military. Source: evtol.com

Hope was given to the dying idea by the United States Air Force. The Agility Prime competition, announced in 2019, aims to create prototypes of small flying machines capable of vertical takeoff. As one of the goals of the project is the development of an alternative to the modern V-22 Osprey tiltrotor. It must be said that the Air Force did not put forward any firm requirements for the layout of the aircraft. It can be a multi-seat flying car, a stool with many screws, and a cargo drone. It is only obvious that electric motors powered by a lithium-ion or lithium-polymer battery are supposed to be used as a power plant. The key advantage of such a scheme should be noiselessness and adaptability for use by special operations forces behind enemy lines. The machine can be either fully piloted or moving in a semi-automatic mode. Agility Prime is planned for $ 25 million in 2020. Who claims to be the flying taxis for the Pentagon?

The most elaborate variant looks like an individual aircraft from the Lift Aircraft company under the name “Hexa”. This is an eighteen-rotor machine, which is quite difficult to determine its place in the hierarchy of flying technology. The closest will probably be a flying shuttle or a multi-rotor flying taxi. 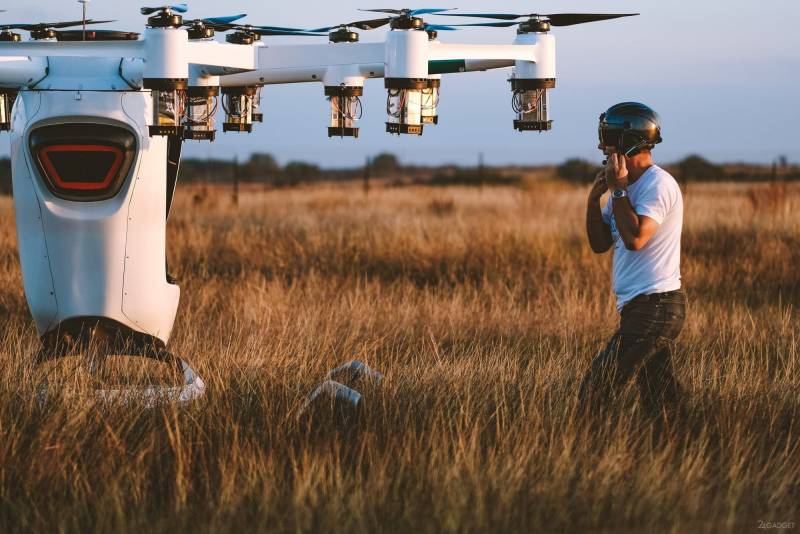 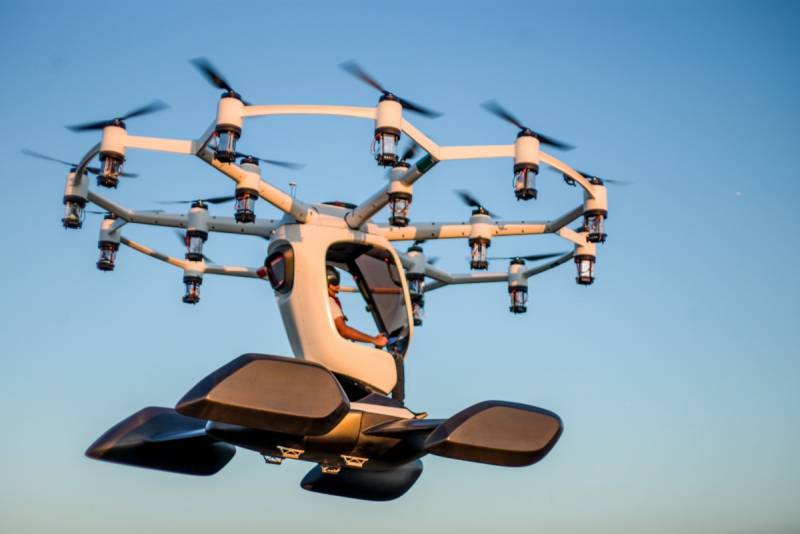 This shuttle weighs almost 200 kg and is assembled mainly from carbon fiber. The Hexa first flew in November 2018. According to the current legislation, the pilot of such a shuttle does not need a license to fly – in this weight category, everything and everyone is possible. A flying taxi is devoid of a chassis in the usual sense; instead, floats are provided, which also play the role of energy-absorbing elements in case of a hard landing. Flight safety is ensured by the Parazero BRS parachute, ejected by squibs, which reduces the minimum rescue height of the pilot to 10 meters. The parachute is also capable of opening in automatic mode. According to the manufacturer, “Hexa” is able to land softly with six motors turned off. This safety margin is not accidental. The technique is supposed to be used for military purposes, and many motors with individual batteries on the shuttle increase resistance to both small arms and the banal failure of individual power plants. In the case of two-, three- and even four-engine aircraft, the issue of reliability is much more acute. “Hexa” can be controlled both from an external console and by the pilot himself from the cockpit. In addition, a fully automatic flight mode along a predetermined route is provided. 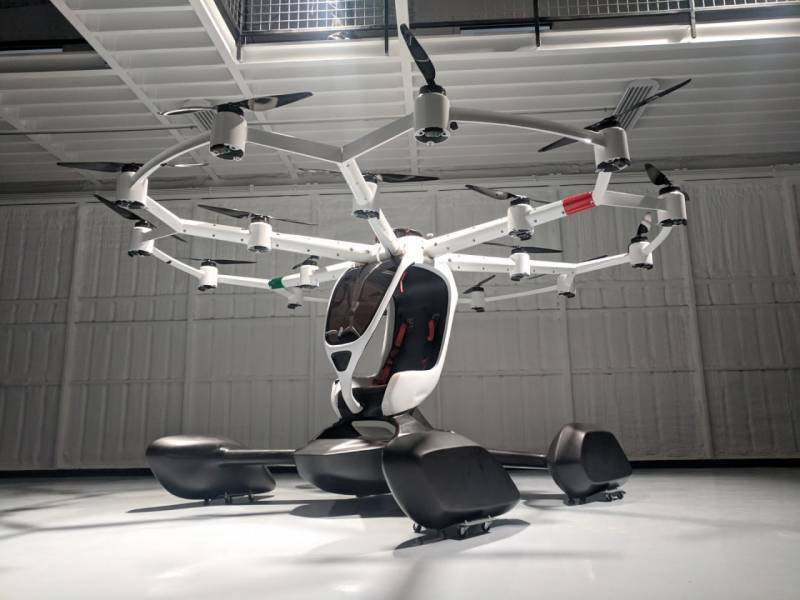 Like any drone, a shuttle from the startup Lift Aircraft returns home in the event of an excessive battery drain. Initially “Hexa” was developed for civilian use, and now everyone can buy such a unit. True, the site mentions a very limited number of finished cars and does not even indicate the price. It seems that the company simply does not have the money to build serial shuttles. However, a lucky potential user can lease the shuttle for a short term, earning money on every flight.

The developers have the greatest hopes, of course, regarding the Agility Prime competition. On August 20, 2020, Lift Aircraft CEO Matt Chasen demonstrated the Hexa’s capabilities to the Air Force at a military base in Texas. The shuttle with the pilot maneuvered for four minutes at a height of 12 meters, and then successfully landed to the applause of a few spectators. It should be noted that Chasen presented a slightly modified version of the “Hexa” – in particular, there were more floats on the “military” version. At the moment, it is not known whether the guys from Lift Aircraft received the go-ahead for further work within the framework of the competition.

In February this year, Vermont-based startups Beta Technologies and California-based Joby Aviation gained access to the third demo stage of the Agility Prime competition. They were able to prove to the Air Force the viability of their designs and received money for the practical implementation of ideas. In the future, the military plans to buy at least 30 vehicles for testing. Will be chosen from among those who will be the most impressive in the Area of ​​Interest One (AOI-1) prototype aerial race. The requirements for the race are as follows: carry three to eight people over 160 kilometers at an average speed of at least 160 km / h. The mentioned “Hexa” in terms of dimensions and carrying capacity is not a direct competitor to Joby and Beta products, as it belongs to the AOI-2 category, where it is required to move 1-3 people. There is also the AOI-3 category, in which heavy cargo drones compete. The developers have not yet presented their prototypes, but Joby Aviation has a trump card – an almost ready-made four-seater vertical take-off and landing electric shuttle. This flying taxi was designed for civilian use and is likely to become the basis for a military model. Moreover, in all respects on paper, the machine meets the requirements of the Area of ​​Interest One (AOI-1). Beta has been working on the ALIA-250c six-seat electric powered aircraft for three years now and is currently upgrading it for the US Air Force. The developers say the prototype was inspired by the aesthetics of the arctic tern. The car really turned out to be a little unusual. 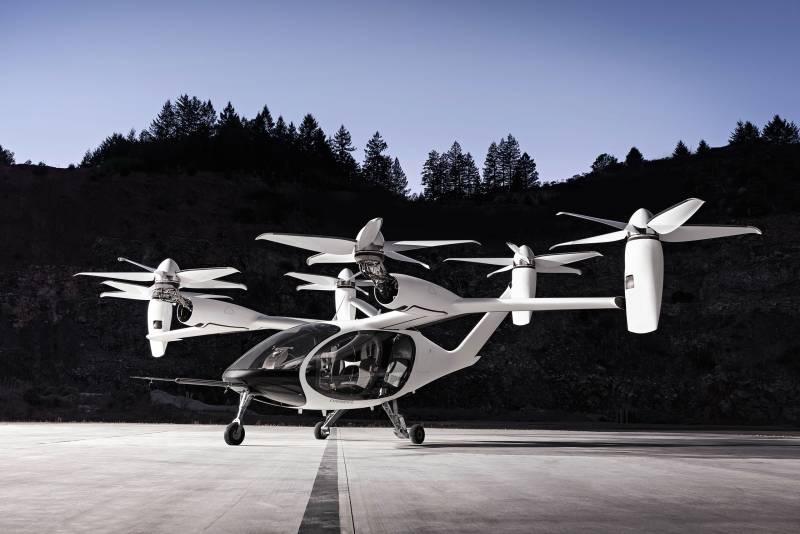 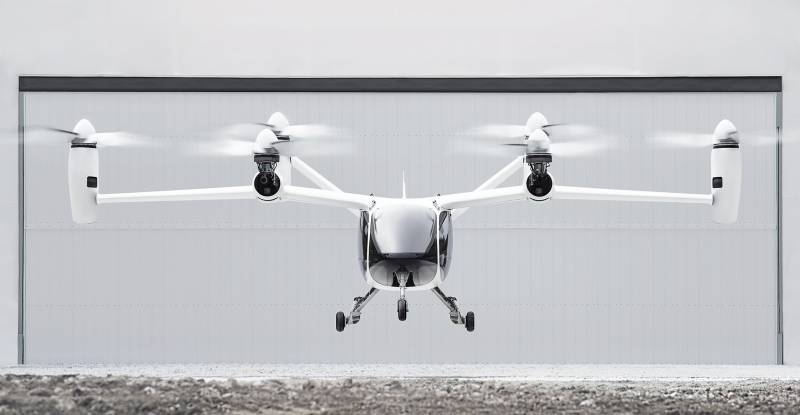 In addition to the man-made tern, the Beta Technologies portfolio also includes fast battery charging technologies, which could also play a role in the Air Force competition. According to the curators of Agility Prime, 15 aircraft manufacturers, not only from the United States, but also from other countries, presented their developments to the jury. In particular, the intentions to participate in the project were voiced by the Japanese. The four-engined drone from NEC Corp is slated to enter production in 2026, and a military version of this electric shuttle may well please the Pentagon. However, the car is just learning to fly, and on a leash and in a safety cage. With a curb weight of 150 kg, the drone must lift one or two people into the air. Very optimistic parameters, I must say.

The coming electric revolution in the army, if it happens at all, will bring a lot of interesting things. First of all, the technique will acquire noiselessness and relative invisibility for thermal imaging observation devices. Fighters will get incredible mobility. An example is the experiments of the Dubai police with the Hoversurf flying motorcycle. Recently, however, he almost killed his rider, but this is still attributed to the novelty of technology. However, there are still a lot of unresolved problems with flying electric trains for the military. Firstly, this is the short range of the equipment, limited by the capacity of the batteries. The logic of using such environmentally friendly aircraft in case of battery discharge is not fully understood. Where to look for a current source in the field? Secondly, the lithium-ion batteries themselves are fire-hazardous and, in the event of being hit by a bullet or shrapnel, they can flare up, and there will be nothing special to extinguish them: water with foam is not suitable for this. Thirdly, the race for the maximum lightening of such flying equipment excludes even a hint of the use of the simplest armor. Not the best option for the army, is it?