A machine gun and a soldier, and also a mother with a child. The picture is simply idyllic!

Follow the Ural, follow the Ural,
there is a lot of space for the Molotov dacha.
We will send both the Stalins and their henchmen there,
political instructors, commissars and Petrozavodsk swindlers.
No, Molotov! No, Molotov!
You lie even more than Bobrikov himself!
Music: Matti Jurva, lyrics: Tatu Pekkarinen, 1942

Weapons and firms. To start this material, dedicated to the little-known Finnish automatic rifle (in our “automatic”) “Valmet”, will have some explanations. First of all, what is this song and how did it come about? It appeared as a response to our song about Suomi the beauty in 1942. But who is Bobrikov and why is he mentioned in this song of clearly anti-Soviet content? “Bobrikoff”, with which Molotov is compared in every refrain, is Nikolai Ivanovich Bobrikov (1839-1904), adjutant general, infantry general, member of the State Council, Governor-General of Finland, as well as the commander of the Finnish Military District, who conducted an active the Russification policy of Finland. In 1904, in Helsingfors, he was mortally wounded by the terrorist Eugene (Eigen) Schauman, who also shot himself. In Finland, however, he was remembered. And not on the good side. And now here is such a wonderful phrase, taken from “Teachings given by a man named Akhta, son of Dauau, to his son, named Pepi, when he sailed south to the capital to send him to school”: “… and so calmly, how calm it is for someone under a lion. ” This is exactly what you can say about any small country bordering on a large one. And it does not matter whether she is peaceful or not, it is important that her interests are “big” and they often do not coincide with the interests of a small country. And who, in this case, just has to retreat? Of course, the country is small, since it cannot resist the big one. But what about the national identity, which always thinks about itself a little more than it is worth? How is national pride? 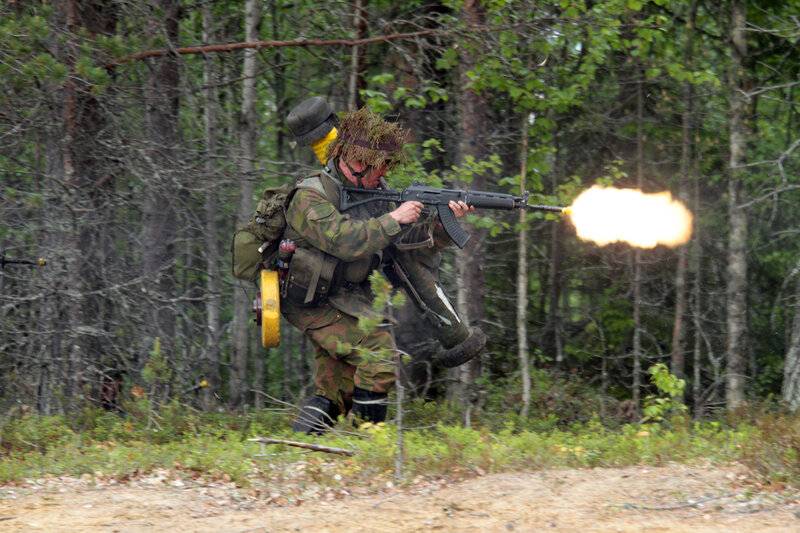 Finnish submachine gunner in the forest … 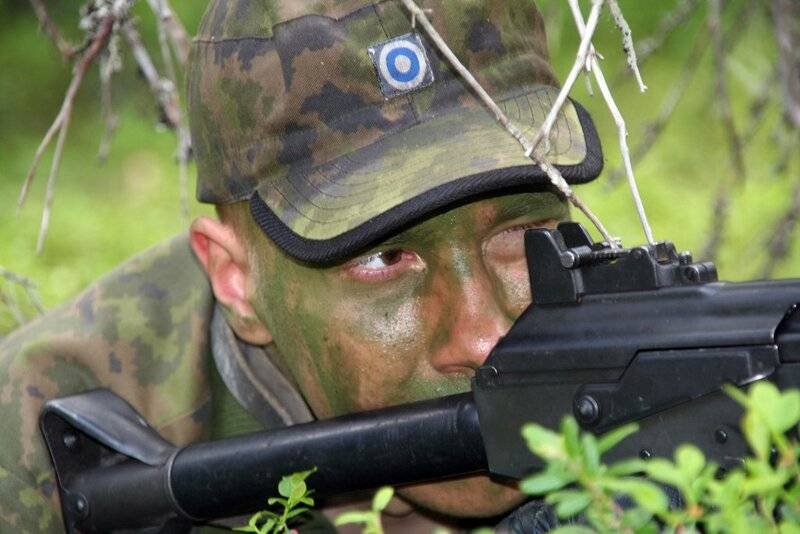 … and in ambush in dense thickets!

In the case of Finland, everything was not so bad. As part of tsarist Russia, it was the freest country! Yes, the imperial Russian navy was based in Helsingfors, but isn’t a large number of sailors wandering around taverns and officers drinking in restaurants a direct benefit to the economy? Yes, the empire had to pay taxes, and the Finns were called Chukhonts, but they did not have to think about defense. 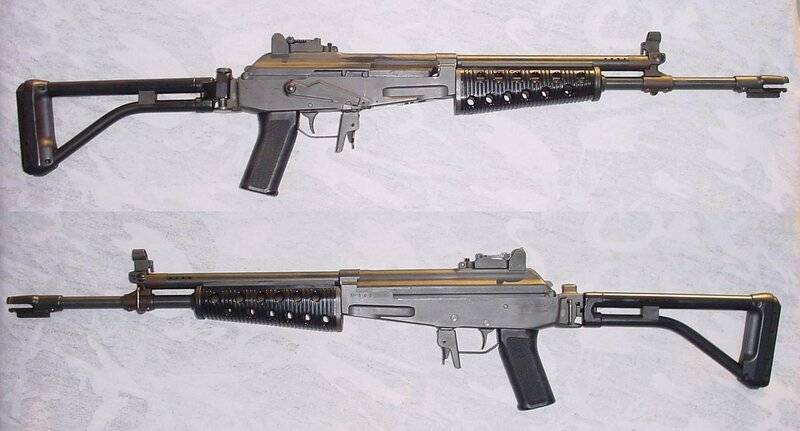 Having become independent, Finland received all the preferences of an independent country, but also a powerful neighbor, whose interests did not always coincide with the interests of this tiny country. And the two wars between our countries, unfortunately, proved this. 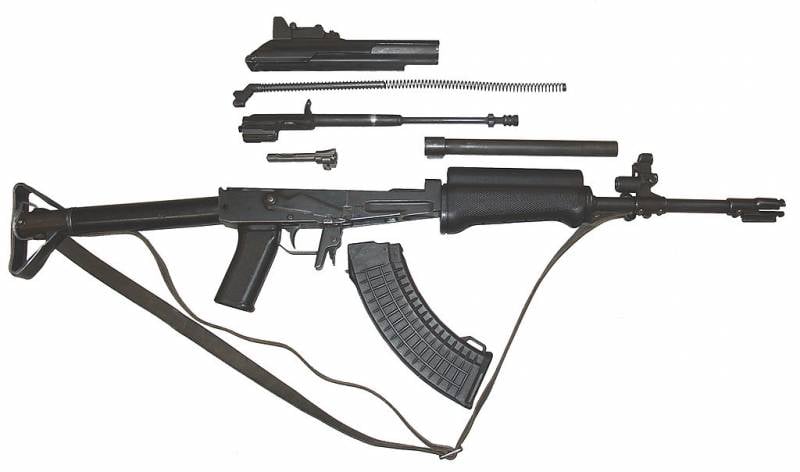 However, after these conflicts, the Finnish leadership nevertheless realized that having such a strong neighbor as the USSR … is simply beneficial. Beneficial in all respects. And so much so that, if you think about it, then Finland could completely abandon the army, declare its complete neutrality and disarmament and live well and make good money, entrusting its protection to its great neighbor. But it didn’t come to them that it was possible!

And the army, albeit small, Finland in the post-war period still started. Well, just in case. Because if something happened, no army would simply save her … There have already been examples of this.

Whatever it was, Finland started the army. And she armed her with the most modern small arms for that time, created on the basis of, again, the Soviet Kalashnikov assault rifle, very convenient precisely because of … our common proximity.

The Finns called their “Kalashnikov” as follows: Rk62 (from the Finnish word “rynnäkkökivääri 62”, which means “assault rifle 62”), there is also a variant of the M62. And the production of this or this very “assault rifle” was taken up by Valmet and Sako. Because of this, this machine is also sometimes called “Valmet”, and today it is the standard weapon of the Finnish Defense Army, both in the infantry and in other branches of the armed forces.

Development of the Finnish assault rifle began in the 1950s based on the Polish licensed version of the AK-47. Various foreign models were considered, the most successful of which turned out to be the Soviet AK-47. The first option was called the Rk60. It was released in 1960 at the Valmet plant in Turula and was almost an exact copy of the Soviet assault rifle. It decided to use the same 7.62 × 39 mm cartridge that was used in the AK-47. Again, it is very convenient both in terms of organizing the import of ammunition, and in the event (God forbid, God forbid!) Military operations. 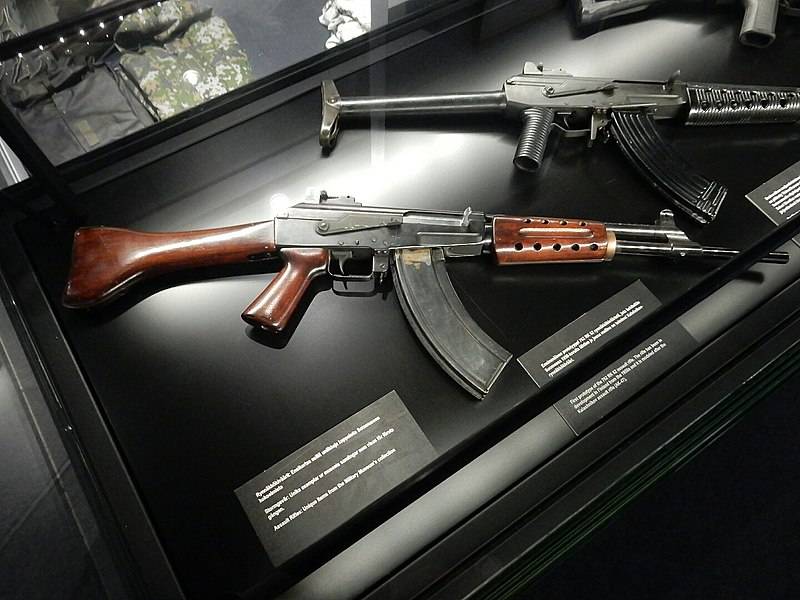 The very first “Valmet” Rk58 had a stock, grip and forend made of wood

It had a metal stock, a plastic fore-end and a pistol grip of the simplest shape, but it did not have a trigger guard, as it was believed that this would make it easier to shoot with this weapon in the cold Finnish winter, when soldiers wear warm gloves. The earliest examples had wooden parts made from tinted birch. After testing by the military, the Rk60 received a trigger bracket and entered service under the designation 7.62 Rk 62. 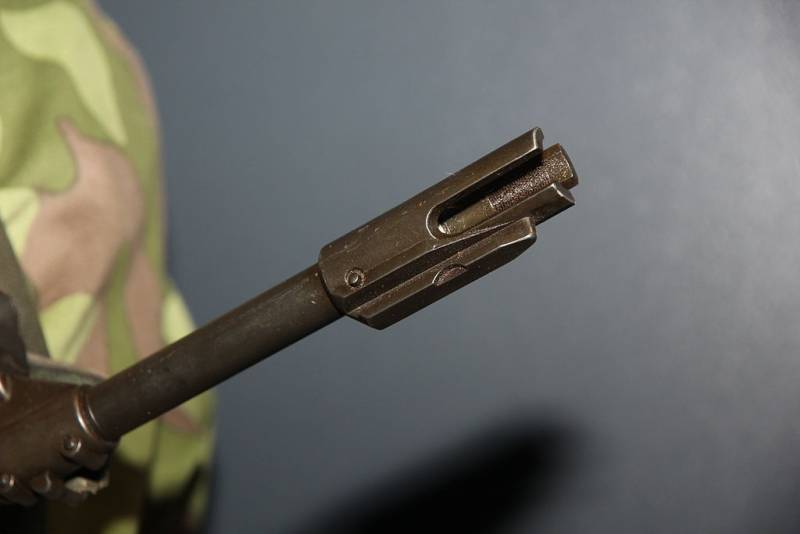 One of the most notable features of all Valmet rifles, including the Rk62 and all other variants, is the distinctive three-pronged flash suppressor and barrel slot for a specially designed bayonet, which can also be used alone or as a combat knife. This flash suppressor is good in that it not only extinguishes the flash of a shot, but also allows you to quickly “cut” the barbed wire, putting it on the barrel and firing at the same time. Production began in 1965 and continued through 1994. During this time, Valmet and Sako jointly produced 350,000 Rk62 rifles.

In August 2015, the Finnish Defense Forces announced the gradual modernization of the existing Rk62 rifles. Her old tubular stock and leather strap will be replaced with a telescopic stock and high-strength synthetic fabric strap. For all rifles, a Picatinny rail will be added to accommodate telescopic sights and night vision devices. Likewise, on the barrel will be placed fasteners for a tactical flashlight and laser designators. The upgraded model was named Rk 62M. 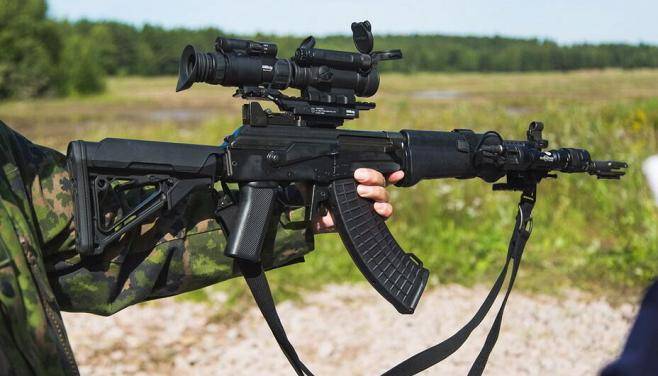 The Rk 62 is considered a high quality variant of the AK-47. The biggest improvement, apart from the quality barrel workmanship, is the scopes. So, most of the AK variants have a rear sighting bar on the body of the sighting block, which, in turn, serves to fasten the gas tube of the gas piston of the receiver pad. On the Rk62, the rear sight is mounted in the rear of the receiver cover and can be supplemented with a tritium-illuminated night sight. With this sight, the shooter is more effective in the dark. Moreover, the front sight also has a mode for “night operation”.

A few years later, Valmet modernized the old assault rifle, which in its new version received the designation Rk.76. The changes affected the shape of the forend, and it also became lighter in comparison with the Rk.62, since a stamped receiver was put on it (again, after the model of our AKM), instead of the old and heavier – milled one.

The most modern version of the Rk.62 is the Rk.95TP assault rifle, which also has a milled receiver, a folding stock that folds to the right, and is made like the stock of the famous Israeli Galil automatic rifle, a new flash suppressor, a slightly larger plastic forend, and is also bent up by about 45 degree cocking handle, and an oversized trigger guard. There is also a variant of the same assault rifle chambered for the 5.56 × 45 mm small-bore cartridge.

This is what the store for Rk62 looks like.

All Rk variants are designed to withstand the extreme environmental conditions of Northern Europe.

And then bullpup rifles came into fashion, and Valmet immediately offered the army an original development of the M82 automatic rifle with a device like the Valmet M76, but … with a magazine in the butt. Short and very comfortable in appearance. 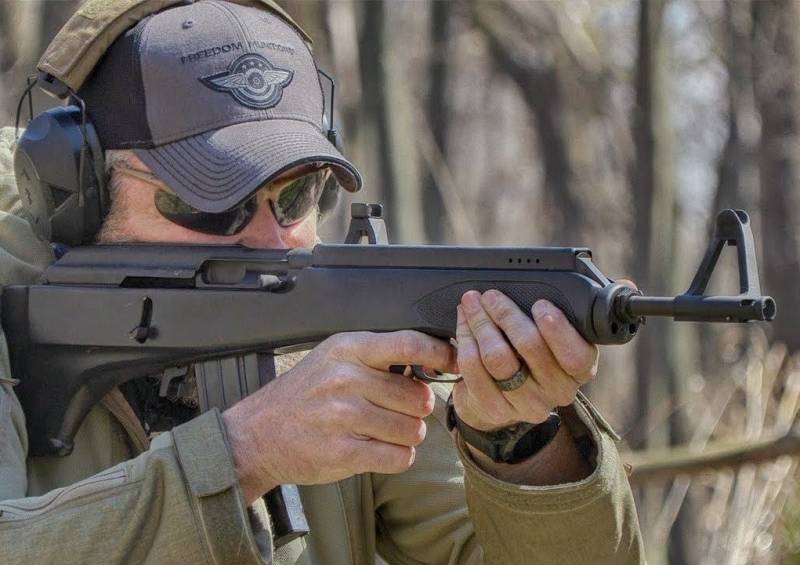 Introduced it in 1978 and produced it until 1986. But they produced about 2,000 units, mainly in the form of a semi-automatic version of the NATO 5.56 mm caliber, which was sold in the United States. Several samples were transferred to the Finnish army paratroopers, but they found it unsuitable as a service weapon. It turned out that the rear sight post has a bad property to injure the face, nose and cheekbones of the paratrooper when landing. The rifle was also poorly balanced, with almost all of its weight in the rear. 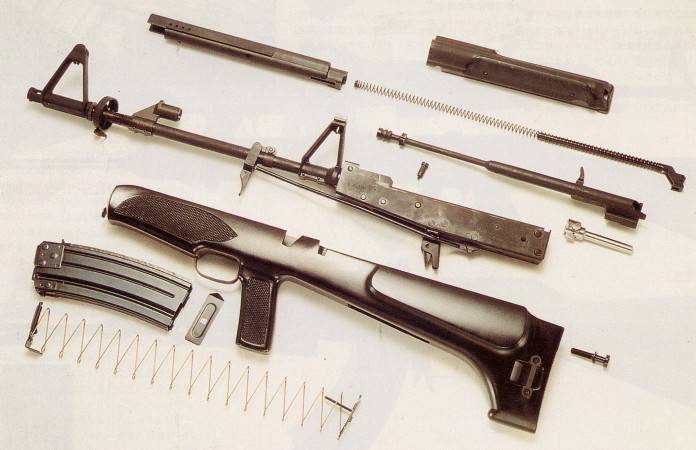 The caliber of the M82 rifle is 5.56 × 45 mm NATO for the 255 470 model and 7.62 × 39 mm for the 255 490 model. The body is made of metal, but the top is covered with a layer of polyurethane. The trigger of the weapon was put directly on the barrel and connected by a pull rod to the trigger, which remained in place. Therefore, the metal base of the hook was also dressed in plastic. After all, the barrel heats up when firing. 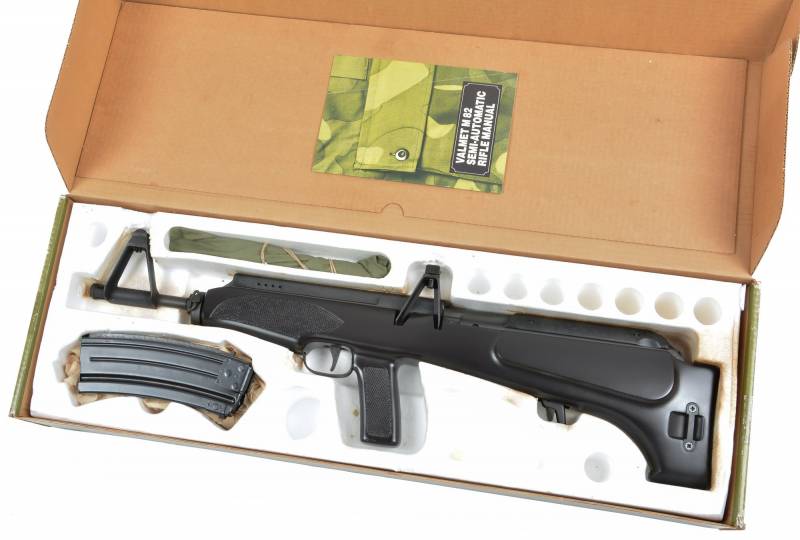 But in such a package, the M82 was supplied to the USA

Sights were also unusual in this rifle. The aiming line is 330 mm long, of which about 55 mm are located above the barrel.

Outwardly, the M82 is even nothing …

The front and rear sights were similar to those of the Bren machine gun, shifted to the left of the barrel by about 1.25 inches (3.2 cm). This design led to the fact that it was difficult to fire from this rifle at a distance of more than 300 m. That is, it could only be used at short “urban distances”, and it was not intended to be any kind of accurate sniper tool. In addition, it was almost impossible for left-handers to use it. 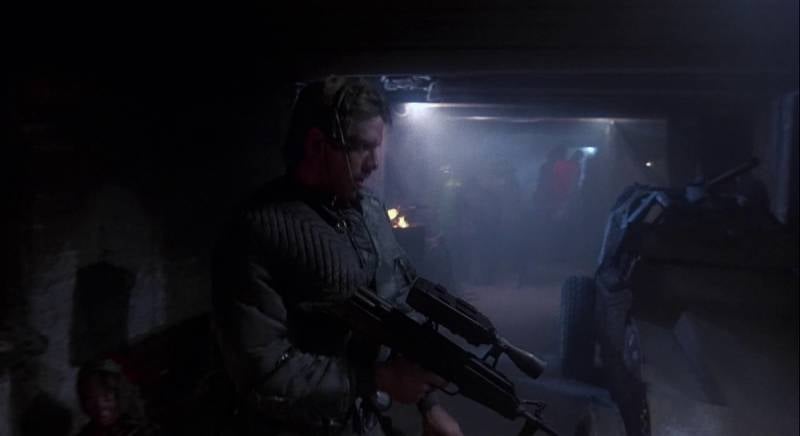 Kyle Reese with his Westinghouse …

But this machine was noted in the film industry. It is with this rifle that the Terminator hero Kyle Reese fights against Skynet robots in the distant future. It is he who plays the role of the Westinghouse M-25A1 plasma carbine, which is actually a Finnish Valmet M82A assault rifle, without a magazine, but with a fake futuristic sight.