In 2015, VNII Signal from the NPO High-Precision Complexes showed for the first time a prototype of the Udar combat robotic complex. Various works on this project are still ongoing, and recently new details became known. Curious information from the press service of “High-precision complexes” and “Rostec” was published by the TASS agency.

It is reported that a number of various tests have been carried out, the purpose of which was to test and test the various functions of the new RTK. First of all, the main running capabilities of the “Impact” were tested. The features of interaction with other unmanned vehicles of different types were also checked.

Tests of systems responsible for autonomous movement have been carried out. RTK “Udar” is equipped with the so-called. traffic planning subsystem. It includes a set of sensors and meters, with the help of which a map of the area is created. Taking it into account, the control automation independently builds a route and follows it.

Unmanned “Strike” can interact with other autonomous or remotely controlled equipment. This RTK has already been tested in conjunction with an unmanned aerial vehicle. In particular, the joint work with a tethered UAV, which receives energy from the Udar, was tested. 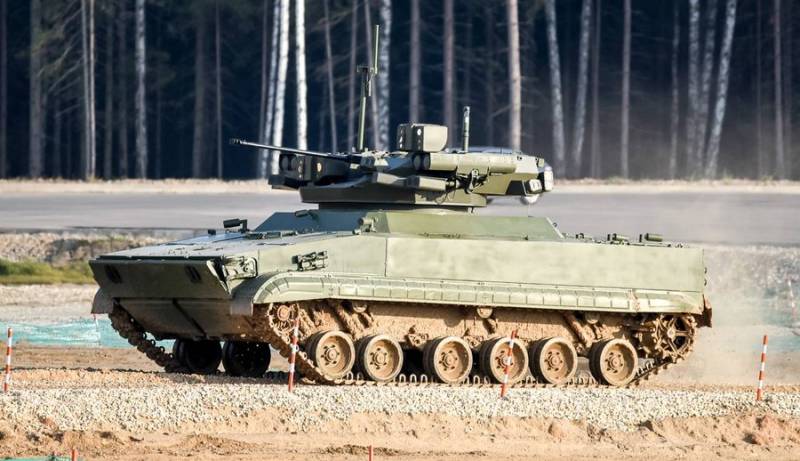 In the aft part of the “Udar” can be placed a small-sized lightweight robot for one purpose or another. If necessary, he descends to the ground and proceeds to perform his work. The interaction of a full-size RTK with such a product has also been tested in practice during tests. Proven small-sized robots are capable of solving a wide range of tasks, from reconnaissance to evacuating the wounded.

It is noted that VNII “Signal” creates its own robotic systems by equipping existing samples with new equipment. On the basis of this principle, a platform for “Impact” was created on the basis of the BMP-3 infantry fighting vehicle. In addition, six different fighting compartments of different types have already gone through robotization, installed on the existing chassis.

On a serial basis

The combat robot “Strike” was first shown several years ago, and in the future, the developers have repeatedly revealed certain features of the project and the desired capabilities of the finished complex. From the latest news, it follows that all the declared functions and abilities of the “Impact” have been tested in the conditions of the training ground. In addition, the high efficiency of the basic approach, which provides for the creation of multipurpose robots based on existing technology, has been confirmed.

During the construction of the RTC Udar, the serial BMP-3 chassis was used. It has retained all the main units, although it has undergone some structural changes. The chassis is supplemented with a set of video cameras with all-round visibility, remote and automatic control systems, communication facilities, as well as actuators for interacting with controls. 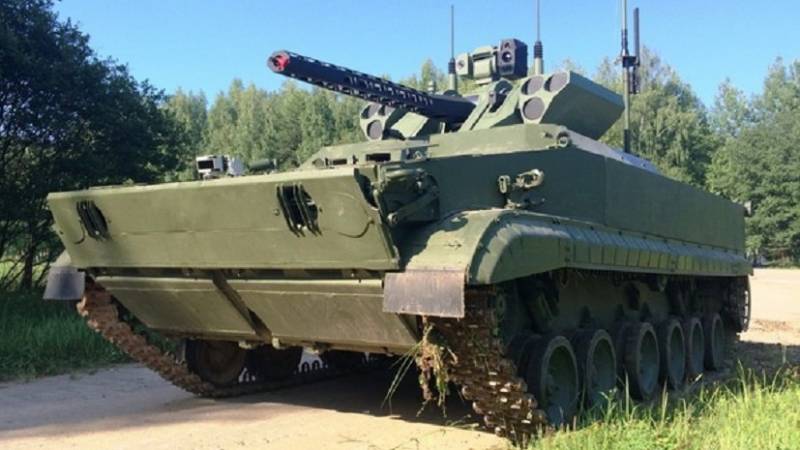 Another version of the complex with different weapons

At the experimental “Impact” during its first demonstrations, a combat module “Boomerang-BM”, controlled remotely, was installed. Tests were reportedly carried out with other fighting squads with similar and different weapons. Such products received a set of equipment necessary for integration into the general control systems of the RTK.

In order to expand combat and operational capabilities, the complex can be equipped with additional unmanned systems. So, for reconnaissance and relaying signals can be used light helicopter-type UAVs, transported directly on the “Impact”. Land-based RTKs for various purposes are being developed, capable of monitoring, transporting various cargo, etc.

The “Impact” project provides for the ability to work in different modes. The armored vehicle can operate under the control of the crew on board or by commands from the remote control. In addition, an automated mode is provided, in which it independently moves along a given route, without needing an operator’s help.

Based on the developments in the current “Impact”, it is planned to create a multipurpose robotic platform suitable for the construction of samples for various purposes. In the future, the combat vehicle will be supplemented by transport and engineering modifications with different equipment and capabilities. 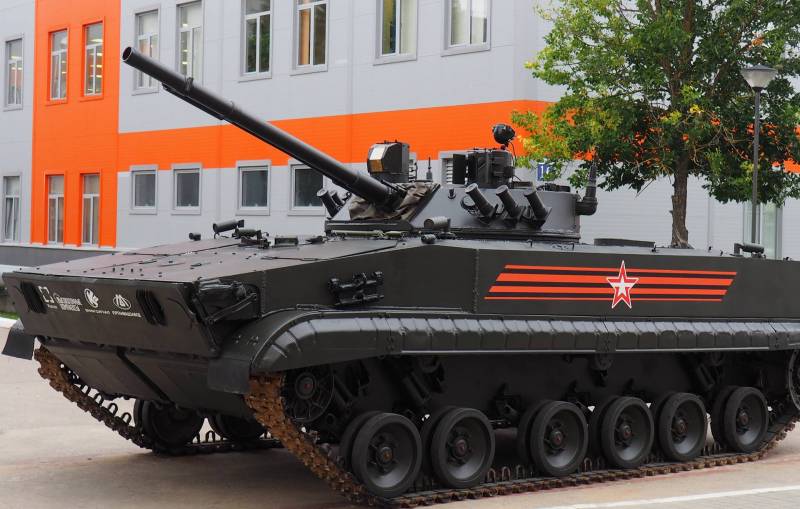 In general, the current project “Strike” and the expected multipurpose platform may be of great interest to the armed forces. With the help of such equipment, it will be possible to solve a fairly wide range of combat and auxiliary tasks. At the same time, it will be possible to reduce risks or obtain other benefits of various kinds.

A combat vehicle, such as the existing experienced “Strike”, is capable of patrolling and reconnaissance, escorting convoys, incl. with automated vehicles and even participate in battles using all available types of weapons. In fact, the combat RTK becomes a functional analogue of the BMP or BRM with some differences and advantages.

The engineering vehicle must carry the appropriate equipment, from the dozer blade to the loader crane. It can be used to evacuate equipment, to prepare positions, etc. The least sophisticated equipment will be received by robotic vehicles, which will have to transport various goods and people, incl. wounded.

As the tests of the existing combat RTK show, the new models will have several important advantages. First of all, it is the flexibility of the application of technology. It can be used in manned, remotely controlled and autonomous versions. In addition, the proposed electronics complex allows the RTK to be supplemented with various additional means, from combat modules to UAVs. 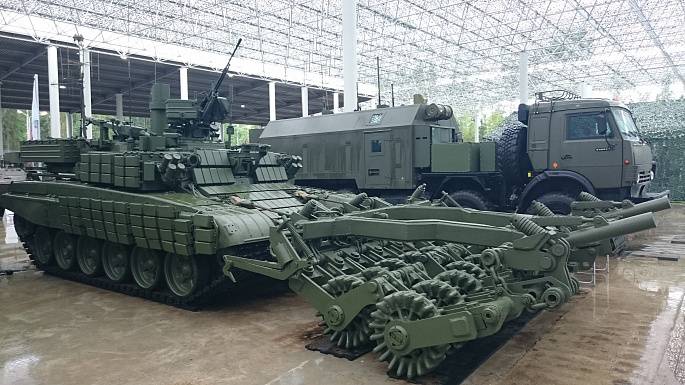 At the same time, the main result of the “Impact” project should be considered an unbuilt combat vehicle and not expected samples on the same platform. Within the framework of this project, VNII “Signal” used and worked out a new approach to the creation of robotic systems. RTK is created by equipping the finished machine with a set of special tools. This makes it possible to do without the creation of a special chassis and speeds up work, and also allows you to maintain a high degree of unification with other army equipment.

This approach is being successfully implemented in new projects. The RTK “Udar” and the robotic engineering vehicle “Prokhod-1” are being tested. Probably, in the future, new versions of the RTK will be presented on the existing base with certain features, created in the same way.

To date, our country has created several robotic systems for military purposes with different functions. At the same time, only individual samples, such as the engineering “Uran-6”, have been adopted for service. Newer developments, incl. equipped with weapons and capable of performing combat missions, have not yet been adopted for service and remain at the stage of development.

The latest news on the successes of Project Impact shows that work is ongoing and is yielding the desired results. The search and testing of new solutions of various kinds is carried out. This means that the project is progressing and is gradually approaching the expected final. The Ministry of Defense will be able to consider the “Strike” in different configurations and choose the most successful for adoption. In addition, the ideas and developments on this project can find application in new complexes, which will be presented only in the distant future.