Currently, Raytheon Missiles & Defense and Pentagon structures are working on integrating the promising GBU-53 / B StormBreaker guided bomb into the weapon systems of various types of aircraft. Already this year, the new weapon will reach the initial operational (IOC) readiness stage on one of the carriers. Then commissioning with other aircraft is expected.

The development of the future GBU-53 / B StormBreaker bomb (until 2018 the name Small Diameter Bomb II – SDB II was used) started back in 2006 and continued until the beginning of the next decade. After that, the testing phase began with flights and dropping from different carriers. Some of these works have already been completed, but others are ongoing.

The first test discharge of SDB II on a training target took place on July 17, 2012 over the White Sands test site. The carrier aircraft F-15E Strike Eagle detected the target, transmitted the necessary data to the bomb, and performed the reset. The product used all its means of guidance and hit the target with a direct hit.

By the end of 2012, work began on the introduction of the GBU-53 / B into the ammunition load of the F-35 Lightning II fighters of all modifications. During the first tests, it was found that the bomb is placed in the internal cargo hold of such an aircraft and is capable of leaving it without any problems. However, flight tests with a drop were not carried out due to the unavailability of the weapon control systems. 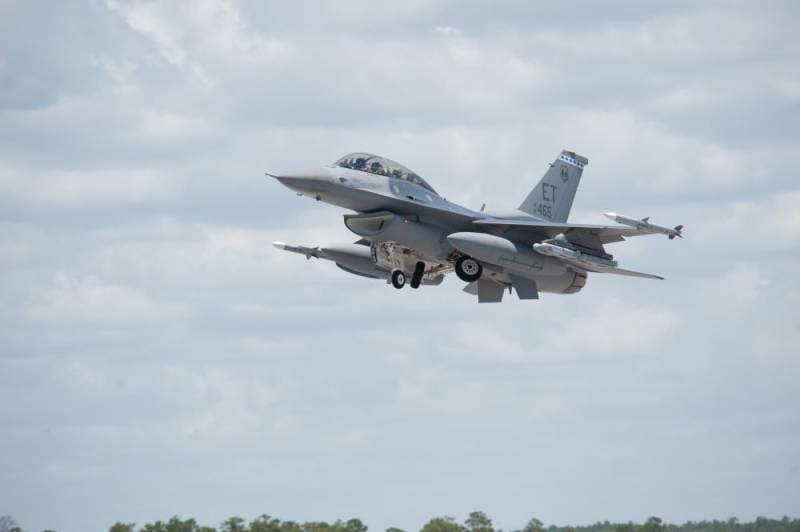 tests on the F-16 aircraft

In 2013-15. with the help of the F-15E and F-16 aircraft, tests were carried out with the defeat of various targets, with known and unknown coordinates, stationary and moving, etc. Not all drops were successful, but the tests were generally considered successful. As a result of this stage of work, the first order for small-scale production appeared.

To date, the development work on the GBU-53 / B StormBreaker has been completed, the last stages of preparation for the operation of the bomb in the army are in progress. At the same time, there are certain problems and delays, due to which the timing of achieving the initial operational readiness is again shifted to the right.

In mid-2018, the development company announced the start of experimental military operation of a new bomb on F-15E aircraft. They were going to go through this stage by the fall of 2019 and then reach the IOC. However, in the past year, unforeseen problems were identified with individual elements of the bomb and related equipment, which took time to fix. Then the schedule had to be revised due to the pandemic and related restrictions.

According to the latest reports, the GBU-53 / B as part of the F-15E armament will enter the IOC stage in the second half of this year. More precise dates have not yet been announced. The timing of the completion of work on the F-16 is also not specified. This will likely happen shortly after the current Strike Eagle activities are completed. 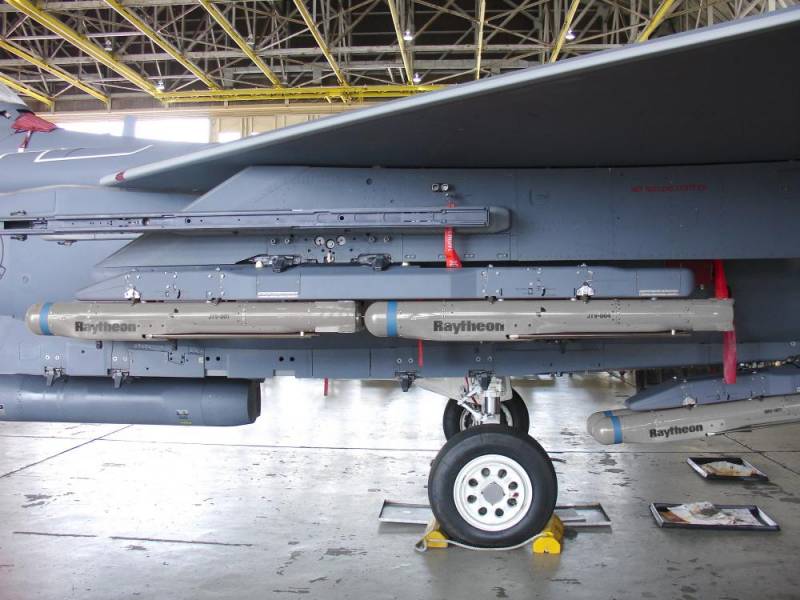 Suspension of bombs on the BRU-61 / A holder

The F-15E can use a new type of bombs using the BRU-61 / A holders, each of which hangs four products. The maximum ammunition load is 28 bombs, but this can negatively affect the composition of other weapons and the corresponding combat capabilities.

In the interests of the fleet

On June 15, 2020, a new test event was held aimed at introducing a promising bomb in the Navy’s carrier-based aviation. At an unnamed training ground, the first product was dropped from the F / A-18E / F Super Hornet fighter, followed by a controlled flight and guidance to a training target.

It is reported that the carrier aircraft dropped the bomb and then passed on target data to it. On them, the product carried out preliminary guidance, then detected and hit the specified object. The possibility of effective interaction between the carrier and the bomb has been successfully confirmed.

In the near future, other necessary measures will be taken to introduce the GBU-53 / B into the ammunition load of carrier-based fighters. According to current plans, the F / A-18E / F will become the second operational carrier of a promising bomb in the US armed forces – and so far the only one in the Navy.

The first tests of the GBU-53 / B product with the F-35 aircraft took place back in 2012, but such a strike complex has not yet reached full testing or implementation in the troops. Moreover, such work is still being postponed, and IOC on F-35 fighters is expected only by the mid-twenties. 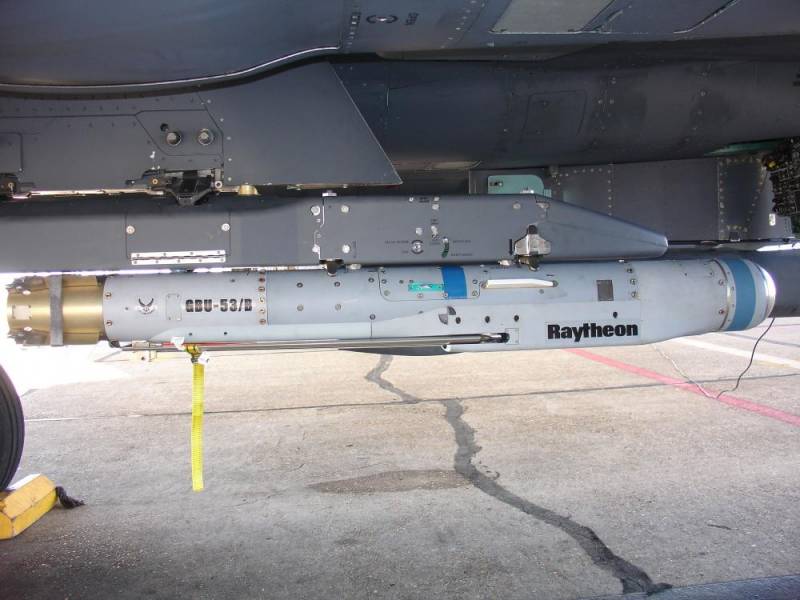 To use StormBreaker bombs, F-35 aircraft need a software update for weapons control systems. The necessary software will appear as part of the expected upgrade of Block 4, which is going to be launched in the near future. Only after that it will be possible to start full-fledged tests. At the next stages, the complex in the form of the F-35 and GBU-53 / B will be mastered by the Air Force, Navy and ILC.

The GBU-53 / B bomb will be able to carry F-35 fighters of all three modifications. The possibility of transportation of such products in internal compartments and on an external sling is provided. The cargo compartments can accommodate up to eight bombs, incl. along with other weapons. Up to 16 bombs can be mounted under the wing using beam holders.

Exports are planned as part of the fifth generation of fighters. The first customer could be Great Britain. In 2016, the Royal Navy selected weapons for its future F-35Bs. A similar competition was held by the KVVS, who were going to re-equip the Eurofighter Typhoon aircraft. In both cases, the GBU-53 / B bomb lost to the MBDA SPEAR 3 missile due to its lower flight characteristics.

In the same 2016, information appeared about the imminent signing of a US-South Korean contract. The Air Force of the Republic of Korea intends to use StormBraker products to enhance the strike capabilities of the F-15K aircraft. 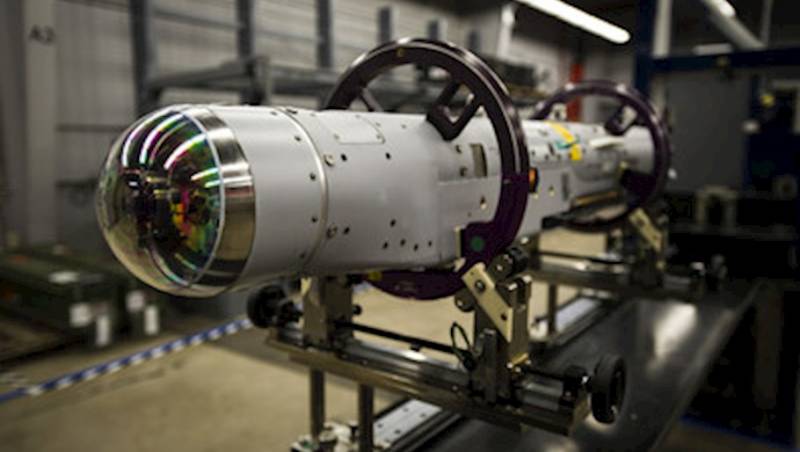 In 2017, negotiations started with Australia. This country plans to purchase 3,900 bombs to arm the F-35A fighters. Apparently, the implementation of two export contracts will begin in the near future, but not earlier than the start of supplies to the US armed forces.

The GBU-53 / B StormBreaker is a compact, small-caliber guided bomb designed to engage small stationary and moving targets with known coordinates or with detection on the fly. When developing this weapon, special measures were taken to increase the likelihood of a successful solution to a combat mission.

The bomb is made in a case of large elongation with a variable cross-section. The maximum diameter is less than 180 mm, the length is 1.76 m, and the weight is 93 kg. There are wings and a stabilizer that can be deployed in flight. The head of the hull is given under the homing head, the tail compartment accommodates the steering machines. Between them is a high-explosive fragmentation warhead weighing 48 kg.

It is stated that StormBreaker will “change the rules of the game”: in one of its combat modes, an aerial bomb will be able to glide to a target area at a distance of up to 45 miles (more than 72 kilometers), and then find and attack targets without human intervention. She will be able to hit moving targets, such as tanks, even in bad weather, in heavy smoke or in complete darkness.
(Written by Forbes.)

StormBreaker is equipped with an original three-piece seeker head, increasing the likelihood of successful capture and destruction of the target. The seeker includes an active millimeter-wave radar component, an infrared system and a semi-active laser unit. Using all these means, the bomb is able, independently or with the help of a gunner, to find ground objects in any weather conditions and at any time of the day. 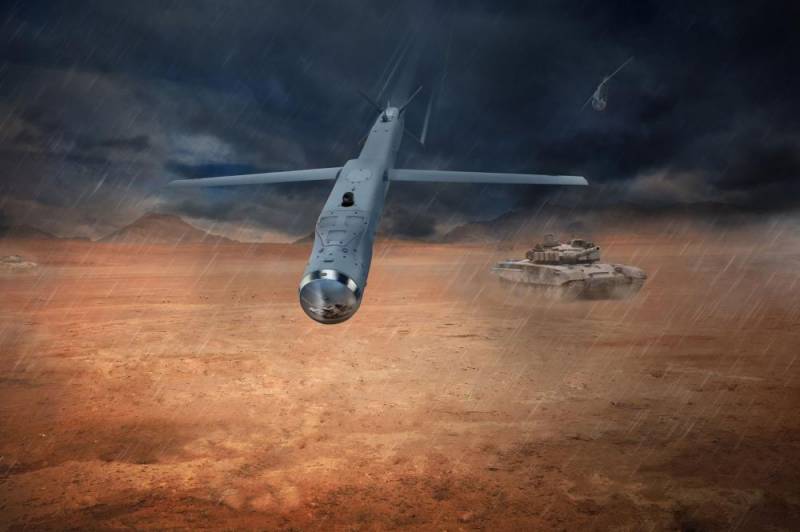 The sequential or simultaneous use of three guidance systems increases the likelihood of hitting a target and, as a result, affects the overall effectiveness of the combat employment of tactical aviation. It was reported that during the tests, 90% of the GBU-53 / B bombs successfully coped with the assigned tasks.

The bomb does not have its own engine, but it has a very high range. An attack on a stationary target can be carried out from a range of up to 110 km. The defeat of a moving object requires maneuvering, which leads to a waste of kinetic energy and a reduction in the maximum range to 72 km. In both cases, the carrier aircraft can remain outside the enemy’s air defense engagement zone.

Together with the promising GBU-53 / B StormBreaker aerial bomb, the US Air Force and Navy want to get a number of new capabilities. Due to the successful combination of components and characteristics, such weapons will be able to solve a wide range of tasks and will be a good addition to other aviation weapons.

The successful completion of the project promises clear financial benefits for Raytheon. Thus, the 2015 contract for small-scale production provided for the supply of 144 bombs worth $ 31 million. In a large series, the cost of the product is planned to be reduced to 110-120 thousand dollars, but this is compensated by the volume of the contract. Also, negotiations are underway on export agreements.

However, all the benefits will be fully reaped only after the launch of the full-scale series and the achievement of full operational readiness. The first step in this direction will be taken this year – the F-15E and possibly the F / A-18E / F fighters will reach the IOC stage.