The ambulance bus GAZ-03-32 is one of the first samples for the Red Army. Photo Carakoom.com

The transportation of the wounded and sick is a rather difficult task, which requires special equipment, such as ambulances. The first machines of this kind appeared in the medical service of the Red Army in the thirties. The development of the sanitary park continued and did not stop even during the Great Patriotic War.

Ever since the First World War and the Civil War, it was known that the wounded and sick should not be transported in “ordinary” cars and trucks, since such a trip can lead to a deterioration in the condition with the most sad consequences. The patient needed both the supervision of a medical worker and special conditions of transportation.

Real work on the creation of ambulance transport for military medical units started in the early thirties; they were led together by the people’s commissariats of defense and health. As a result of this project, in 1935, a uniform look was adopted for an ambulance for the Red Army and civil hospitals, taking into account the needs of the customer and the capabilities of the industry. 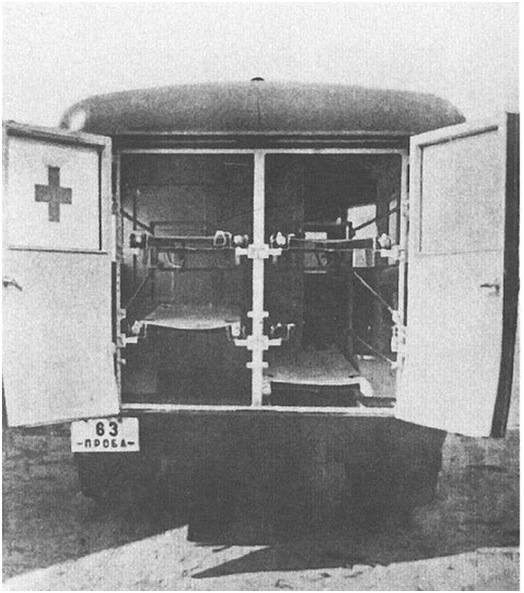 Based on this concept, the design bureau of the Gorky Automobile Plant, headed by Yu.N. Sorochkin created several new designs. The first was the ambulance bus GAZ-03-32. It could be built on the GAZ-AA or GAZ-MM chassis, and the design of the single-volume van body was based on the small-class bus GAZ-03-30. The car could carry four stretchers, an orderly and some supply of medicines. Soon a similar GAZ-05-194 bus appeared on the GAZ-AAA three-axle chassis. It was distinguished by an increased cabin volume and the presence of additional seats. Maximum unification with other samples has borne fruit. So, in a few years, more than 1400 GAZ-05-194 buses were built.

In parallel with ambulances for transporting the wounded, other models were created for military doctors. In all cases, we were talking about a standard van with one or another equipment.

In 1935, work began on the first sanitary transport, taking into account all the specifics of future work. GAZ engineers studied domestic and foreign experience, after which they formed the complete technical appearance of the new car and built a prototype. Subsequent work continued until 1938, and the result was the GAZ-55-55 car (often shortened to GAZ-55). 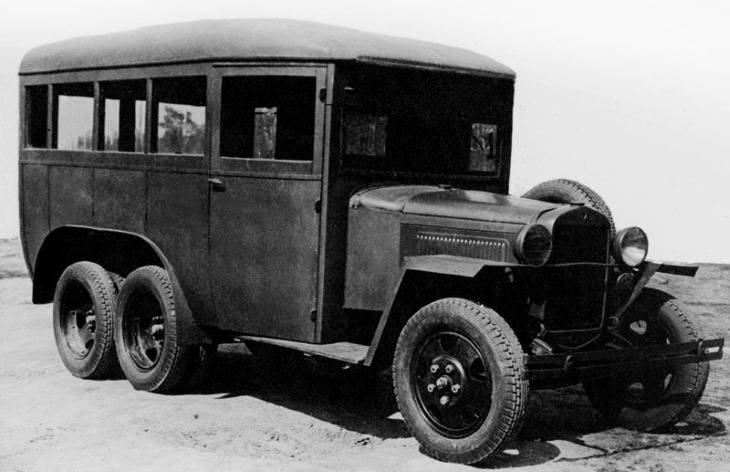 The GAZ-05-193 headquarters bus, which became the base for the ambulance GAZ-05-194. Photo Sovietcars.net

The basis of the GAZ-55-55 was the GAZ-AA chassis with extended rear springs and additional lever shock absorbers from the GAZ-M1. Such a chassis was distinguished by a soft ride and did not shake the sick. The exhaust pipe passed through heat exchangers and heated the cab. A wooden-metal van, similar to the existing ones, accommodated folding benches and stretcher mounts. The car could carry up to eight seated or up to four recumbent, as well as an orderly.

The first serial GAZ-55-55 appeared in the same 1938. By the end of the year, GAZ produced 359 cars. Another 72 chassis went to the Kazan Body Plant for final assembly. In the following years, the rate of production grew, even the beginning of the war did not prevent it.

Of great interest is the BA-22 “armored moto-medical station”. The Vyksa plant DRO in 1937 developed a special armored car capable of picking up the wounded from the front line and safely delivering them to the rear. The armored car was built on the GAZ-AAA chassis and equipped with anti-bullet protection. A large aft compartment could accommodate 10-12 seated or 4 lying wounded on a stretcher. 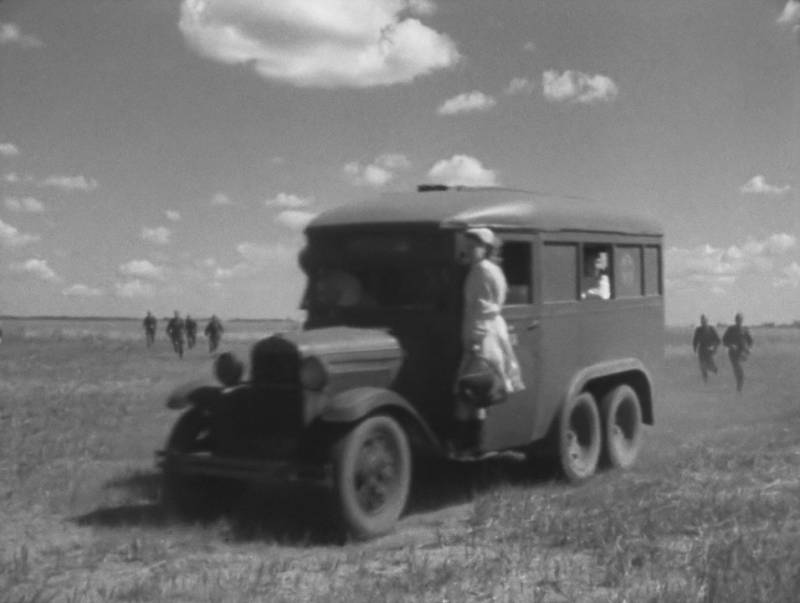 The tests and fine-tuning of the BA-22 dragged on, but according to their results, the machine did not suit the customer. In the summer of 1939, all work was stopped. The only sanitary armored car built was transferred to the Scientific Research Sanitary Institute of the Red Army for study and experience. The concept of an armored ambulance vehicle was not developed.

The first enterprise producing specialized ambulances for the Red Army was GAZ. Following him, similar orders were received by other automobile and related plants. For example, the already mentioned Kazan Body Plant took part in the construction of GAZ-55-55. Production developed and gained momentum, but still could not meet the needs of the military medical service.

After several years of operation and numerous exercises, in July 1938 ambulances were used for the first time in a real military operation. During the battles on about. Hasan military doctors showed all their skills and made full use of the available equipment. In the future, GAZ-55-55 and other vehicles were used in the area of ​​the river. Khalkhin-Gol. 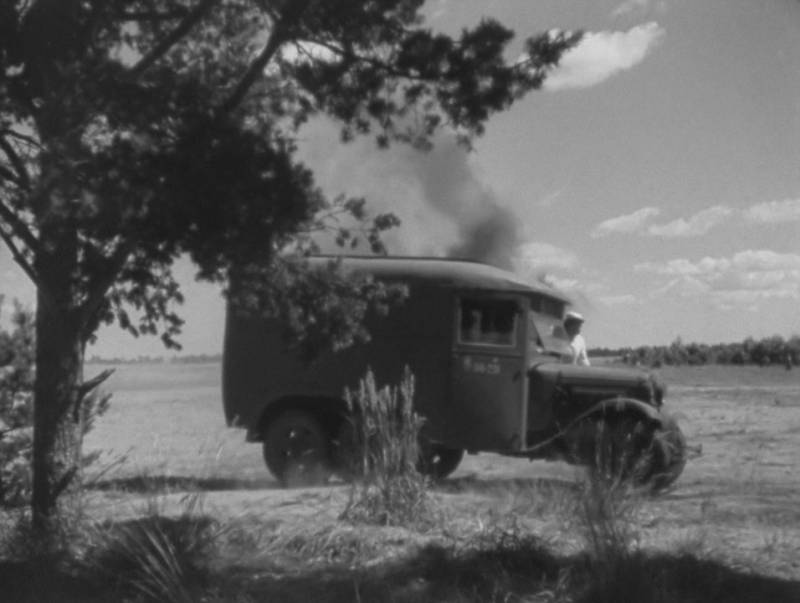 The same “movie hero” from a different angle

In both cases, it turned out that ambulances, with all their obvious advantages, had insufficient capacity, and therefore some of the wounded had to be transported by ordinary trucks. This problem could be solved by increasing the number of existing equipment or by creating new models with larger vans.

However, the supply of any equipment had a beneficial effect on the state of the sanitary park at that time. According to various estimates, by the summer of 1941 there were no more than 40-50 percent in military medical structures. from the required number of ambulances. It could take several more years to cover all the needs.

At the time of the attack of Nazi Germany, the Red Army had several thousand ambulances. Thus, the number of GAZ-55-55 alone was approaching 3.5 thousand. A significant share of the park was made up of buses GAZ-03-32, GAZ-05-194 and other similar vehicles. 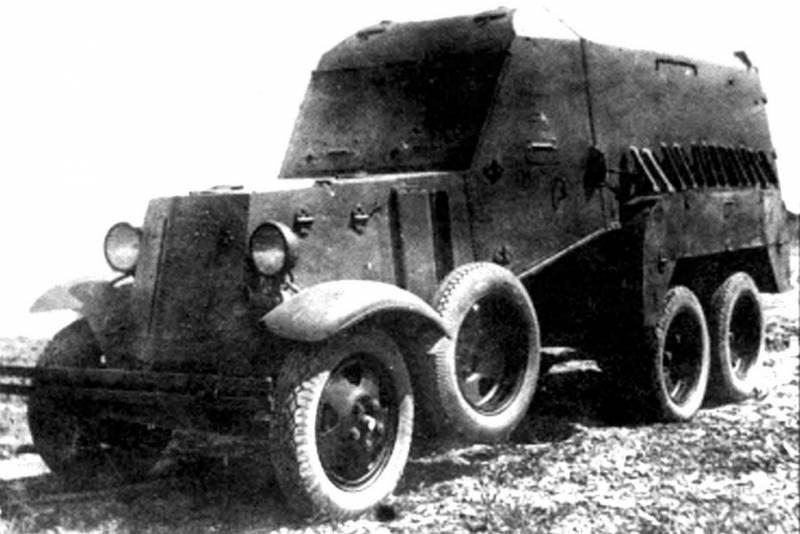 However, this was not enough. The workload on the automotive divisions has skyrocketed. In addition, the first losses appeared – the Nazis did not constrain themselves by conventions and attacked the doctors. In such conditions, any available transport was required.

Trucks have again “mastered” sanitary specialization. The wounded were placed or seated in the back, and the driver tried to drive as carefully as possible in order to avoid consequences. Whenever possible, the trucks were minimally modified. To simplify sanitization, the body was covered with sand and lined with straw. Seat belts and strong arms of healthier comrades saved from shaking the recumbent. 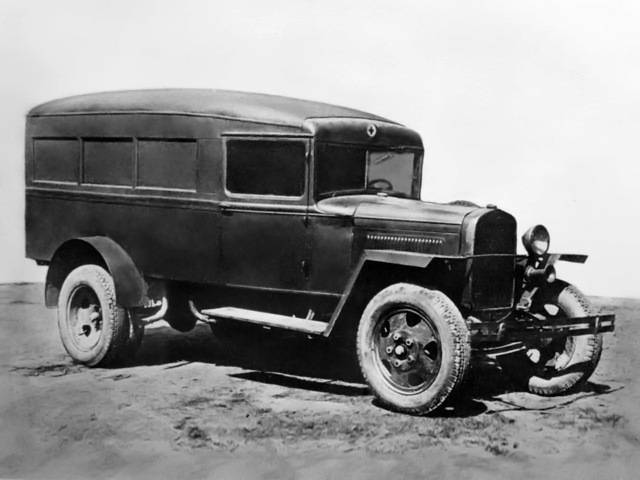 Military vehicle GAZ-55-55. It can be distinguished from pre-war machines by its simplified wings. Photo Carakoom.com

The mobilization of civilian equipment was carried out. Whenever possible, specialized transport was taken from hospitals. At the end of 1941, at the request of the State Defense Committee, the Moscow City Executive Committee handed over to the military medical service about a hundred buses serving the capital. After minimal rework, they became ambulances and began carrying passengers in need of medical assistance.

Car factories continued to produce serial equipment. Various measures were taken to speed up and reduce the cost of production. For example, in 1942, the production of GAZ-55-55 vehicles began on the GAZ-AA chassis in its original form, without a “soft” suspension. It was possible to return to the previous configuration only in 1943. The forces of other enterprises also produced buses and vans on serial chassis. Import supplies under Lend-Lease made a significant contribution to the fleet replenishment.

Despite all the difficulties and losses, the industry and the medical service continued to work and increased the number of ambulances. Already by January 1944, the staffing of divisions with cars exceeded 70%. In the foreseeable future, this parameter could grow with understandable positive consequences. 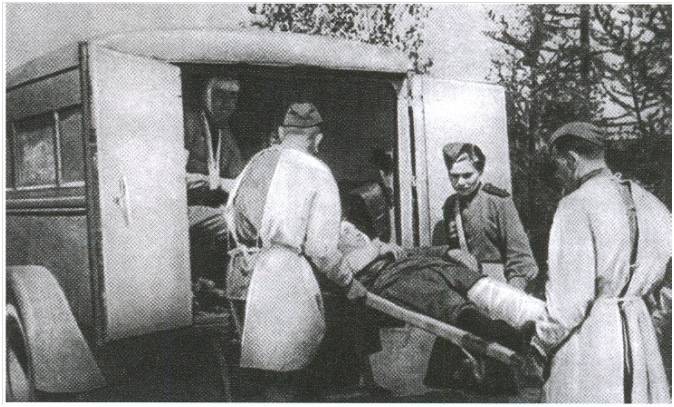 Loading the wounded into the GAZ-55-55. A sedentary patient helps to load a stretcher with a recumbent companion in misfortune. Photo Carakoom.com

In total, over the years of the Great Patriotic War, more than 22.3 million Red Army soldiers and commanders were hospitalized, of which almost 14.7 million were due to wounds and injuries, the rest were due to illness. Military doctors cured and returned to service more than 72% of the wounded and over 90% of the sick. Thus, more than 17 million soldiers returned to the army and continued to beat the enemy.

Such indicators became possible, first of all, thanks to the selfless work of doctors, nurses and orderlies. And their work was provided with a variety of material parts. Special and general purpose vehicles and their crews provided invaluable assistance to doctors. Without their work, military medicine could not have saved thousands and millions of lives.