The idea of ​​combining several radically different functions in one product has long attracted designers, but not all such projects end with success. An example of the problems of this approach can be considered the Soviet mortar-shovel VM-37, intended for fragments of trenches and firing at the enemy. For a number of objective reasons, such a weapon turned out to be unsuccessful and was quickly removed from service.

At the end of the thirties in our country, the issue of strengthening the firepower of rifle units was being worked out, incl. by developing new small caliber mortars. It was precisely these needs of the Red Army that soon led to the appearance of the original design of the mortar-shovel.

Earlier, various sources reported that the original mortar was created in the late thirties under the leadership of the famous engineer M.G. Dyakonov. The product had a number of shortcomings, which is why it failed the tests and did not enter service. However, it is now known that the history of this project looked different.

Work on a promising universal tool began shortly after the attack of Nazi Germany. The shovel mortar project was based on the original and bold idea of ​​combining two completely different objects with different functions. It was assumed that the product will be carried in a standard case from the shovel and will allow tearing trenches, and in battle it will be used to fire at the enemy. 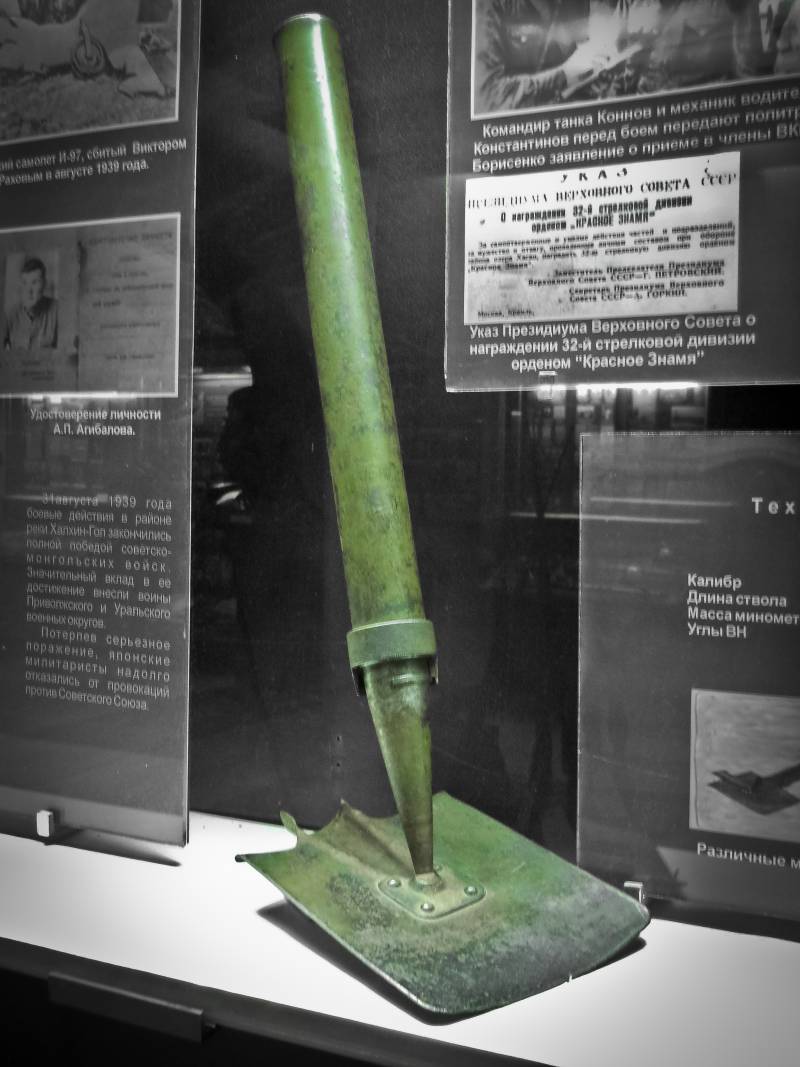 The development of the mortar was carried out at the Research Institute-13 of the People’s Commissariat of Arms. It took only a few weeks to create the project and manufacture prototypes. Already in August, the product passed state tests, and on September 3 it was put into service. The new sample was named “platoon mortar-shovel of 37 mm caliber” and index VM-37. Soon there were orders for the serial production of mortars and mines for them.

The VM-37 mortar looked like a shovel, which was determined by one of its functions. In the stowed position, the base plate performed the tasks of a shovel blade, and the trunk with a one-legged bipod became a handle. The total length of such a product was 650 mm, the canvas had dimensions of 198 x 150 mm. Construction weight – approx. 1.5 kg. Thus, the VM-37 was significantly longer and heavier than the standard blade.

The barrel was proposed to be made of a steel pipe with an inner diameter of 37 mm and a wall with a thickness of 2.5 mm. The muzzle was made in the form of a bell for easier loading. At the other end was a conical breech. A firing pin was pressed into its flat end. The breech conical shank ended with a ball for connection to the base plate. Outside, on the breech of the barrel, there was a rotary lock ring for securing the barrel in the position of the handle. To protect the hands of the mortarman, a tarpaulin tubular sleeve was put on the barrel.

The base plate, aka the blade of the shovel, repeated the shape of the serial product, but in its center there was a recess with a riveted cover – they served as a hinge for installing the breech. 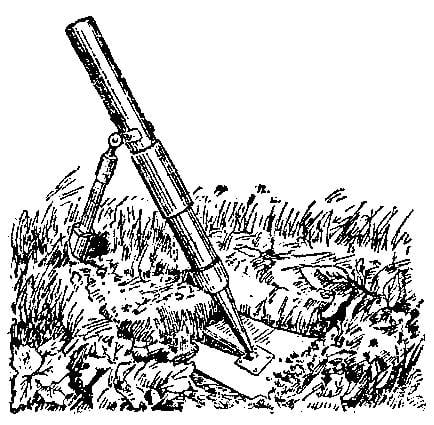 General view of the mortar, drawing from the instructions for use

The bipod for VM-37 was a metal rod, one of the ends of which had a spike for installation on the ground. A wooden cork-lid moved freely along the rod. The other end of the bipod was equipped with a lyre spring for mounting on the barrel. In the stowed position, the bipod was placed in the barrel, with the lyre to the breech; the plug covered the muzzle.

The mortar did not have sights, it was proposed to shoot only with the use of an eye and guided by the gaps. Guidance was carried out manually by tilting the barrel. Shooting with angles of more than 45 ° was considered optimal, because at a lower elevation, there was a risk of misfire due to insufficient acceleration of the mine in the barrel. The design of the hinge allowed for horizontal guidance by 12 ° to the right and left without moving the plate.

A special mine weighing 450-500 g was intended for the mortar. It had a torpedo-shaped body with an explosive charge and a tubular shank with stabilizers, into which an expelling cartridge was placed. Ignition was carried out by samonakol. The energy of the cartridge was enough for firing at a distance of 60 to 250 m, depending on the elevation angle.

It was proposed to carry the mines in a special bandolier. Its basis was a waist and shoulder belts made of tarpaulin. 15 metal cell-cases for mines were fixed on the belt. On top of the case, a spring was provided to fix the mine in place. 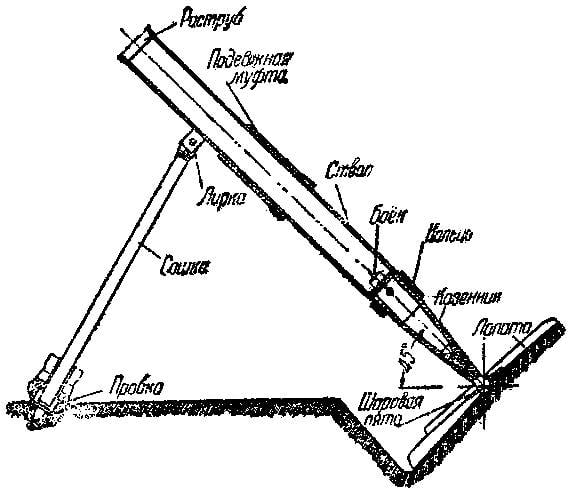 According to the order of the beginning of September 1941, by the end of the month it was necessary to establish production and transfer to the army 10 thousand new VM-37 mortars. In December, the issue had to be increased to 100 thousand. In total, by the end of the year, they were going to receive 250 thousand items. It also required the manufacture of more than 7.5 million mines of a new type.

However, already in October, the Main Artillery Directorate conducted new tests of the mortar and criticized it. In December, regular inspections took place – with similar results. It turned out that the VM-37 as a shovel is inconvenient and fragile, and the combat characteristics leave much to be desired. The mortar, devoid of sighting devices, lacked accuracy. The fragmentation effect of 37-mm mines was low and did not make it possible to compensate for the misses. In addition, deformation of the base plate occurred during the firing.

GAU did not allow the continued operation of the shovel mortar, but a number of serial products still ended up in the troops. In February 1942, the Office requested to stop the production of the mortar due to insufficient performance. On February 24, by the decree of the State Defense Committee, VM-37 was removed from the series and from service.

According to various sources, in a few months, the troops received no more than 15 thousand mortars and hundreds of thousands of mines for them. As a result, unusual weapons quickly disappeared from combat units. However, the last mentions of the use of the VM-37 in battles date back to 1943, but these, most likely, were isolated episodes.

The accumulated stocks of mines for the VM-37 did not remain idle. In 1942, the POMZ-37 anti-personnel mine was developed. The standard detonator and shank were removed from the mortar round. Instead, an MUV tension fuse and a peg were placed in the nests. POMZ-37 was limitedly used for the installation of “stretch marks”.

As it is now clear, the failure of the VM-37 project was predetermined by a number of objective factors. In fact, the problems of the project began already at the level of the basic concept – it was from it that new difficulties and disadvantages followed. So, the very idea of ​​combining two radically different products looks interesting, but ambiguous or even dubious. Despite the obvious advantages, the mortar shovel had to have significant disadvantages.

The poor characteristics of the VM-37 as a shovel were associated with the presence of a hinged connection between the shank-trunk and the canvas-plate. Such a connection did not provide adequate rigidity, which, at least, made it difficult to work. The use of a shovel on frozen ground was generally not possible due to the risk of damage to the hinge and failure of the mortar.

The ergonomics of the shovel limited the diameter of the handle, and with it the caliber of the barrel. This led to a reduction in the mass of the mine and its warhead – with a corresponding loss of basic combat qualities. In addition, a small knockout cartridge could not provide a high firing range.

Thus, the original concept of a weapon combined with an entrenching tool automatically imposes a number of specific restrictions. Each of them affected the design of the mortar-shovel and in one way or another worsened various characteristics – technical, combat and operational. Apparently, the creation of a convenient and effective mortar-shovel like VM-37 was fundamentally impossible.

The VM-37 product remained in the series for only a few months, after which it was removed from production and from service. Since then, production plans have only been partially fulfilled. As a result of the VM-37 project, the Red Army abandoned the idea of ​​a combined weapon and an entrenching tool. However, not forever. A similar sample was developed several decades later, and again without much success.