The history of the combat ferry, which was used both to transport troops and as floating air defense batteries, and sometimes as artillery support ships, began in the summer of 1940. The development of the ferry was directly linked to German plans to land on the British Isles as part of Operation Sea Lion.

The main purpose of the new ship was to be the transfer of troops and cargo when crossing the English Channel. The operation was planned on a large-scale, the Germans would need a huge number of landing vehicles to carry it out, which the Wehrmacht categorically lacked. At the same time, it was necessary to develop and build ships in a short time, until the weather worsens and the season of storms begins.

One of the proposed options for landing vehicles was the Siebel ferry, which got its name from the name of its creator – Luftwaffe Lieutenant Colonel Friedrich Wilhelm Siebel. He was a pilot, designer and entrepreneur. He had an engineering education even before the Second World War.

The education came in handy for Siebel, when representatives of the sapper units of the Wehrmacht approached him, who were faced with the task of preparing landing vehicles for crossing the English Channel. At that time, the lieutenant colonel was in Amiens at the local aircraft plant and was engaged in the restoration of production at the enterprise. The appeal of the sappers, who did not particularly hope for the help of the fleet, interested the officer. And he literally in the same place proposed an option with the combination of two pontoon sections.

The project was as simple as possible. Two parallel pontoon sections were interconnected by transverse steel beams. The structure was driven by an aircraft engine installed between the pontoons on a special pylon. The first version, whipped up, was tested on a lake near Berlin. The ferry reached a speed of no more than 4 knots (7 km / h) and did not impress the military. In addition, it did not have a deck, it could only carry infantry and light cargo. 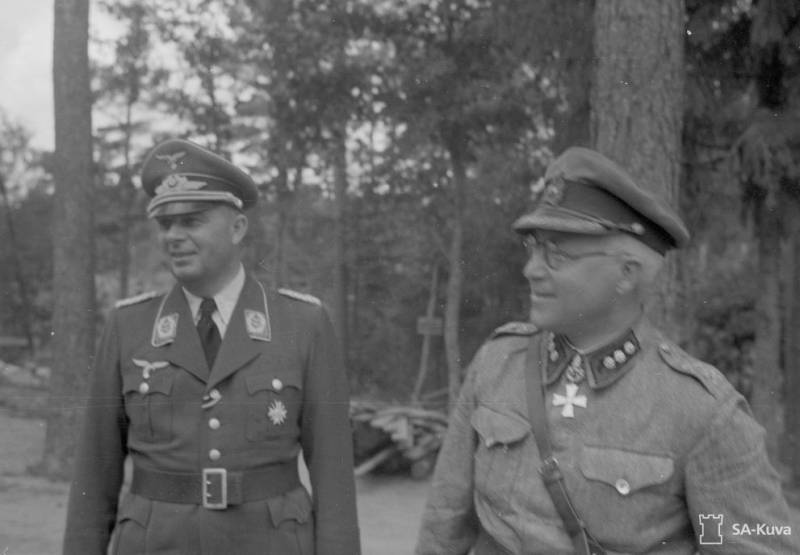 However, as you know, appetite comes with eating.

The newly minted Luftwaffe officer, who had worked in the aviation industry for a long time before the war, could not be dragged away by the ears from the new project. Ferry development continued with Siebel constantly increasing their size.

The length of the next ferry was doubled, starting to dock two pontoons in tandem. In total, it already consisted of four pontoons, on top of which it was decided to make a steel deck. This at the same time increased the strength of the structure and made it possible to transport heavy weapons or vehicles by ferry.

The extended version of the ferry was successfully tested and received the designation LF40 – “light ferry model 1940”. The ferry, which weighed 8 tons without cargo, showed a speed of 8 knots (15 km / h) during tests.

The military liked the model. And they placed an order for 400 units, of which 150 were ready. Further production was canceled due to the appearance of new modifications. 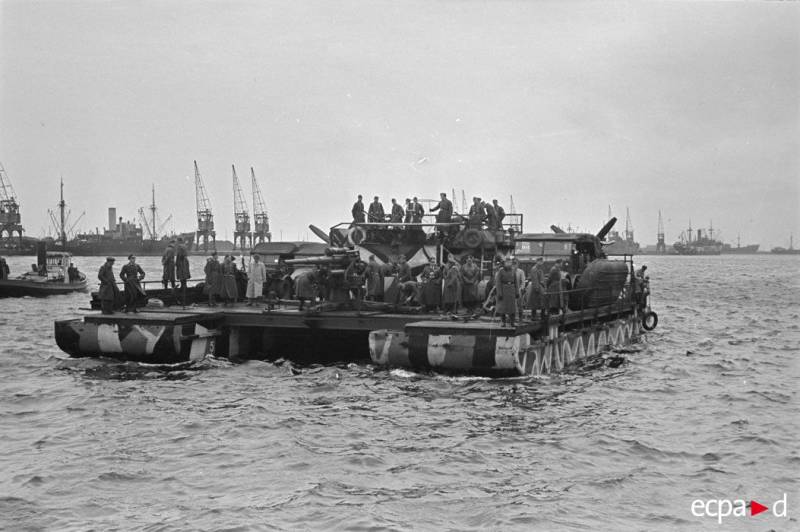 Already on August 31, 1940, a new ferry was successfully tested on the Ems River. This time the heavy version. Carrying capacity and dimensions have grown significantly. The number of pontoons in the structure doubled again. The heavy ferry Siebel received the designation SF40 (schwere fahre).

Initially, each float of the catamaran ferry was assembled from four separate pontoon sections into a single structure. Over time, the use of pontoons was completely abandoned. As a result, the float became one third wider and already consisted of 9 separate sections, which were sequentially attached to each other.

Tests of this model on the Ems river proved the success of the project.

The catamaran ferry demonstrated good seaworthiness and excellent maneuverability. Turns were made by reducing the number of turns of the propellers of the left or right float. Moreover, the Siebel ferry could turn in almost one place. At the same time, the speed remained at the level of 8 knots.

Already in September 1940, the first 27 heavy ferries were built. All of them then went to North Africa.

The first version of the heavy ferry, designated SF40, had a maximum length of 21.75 meters. The deck width of the ferry was 14.2 meters. The maximum draft in comparison with the LF40 version has doubled and reached 1.2 meters.

The weight of the ferry without cargo was about 130 tons. The carrying capacity of the Siebel heavy ferry in this version reached 60 tons (or 120 soldiers with full armament).

The transport crew consisted of 11-14 people. 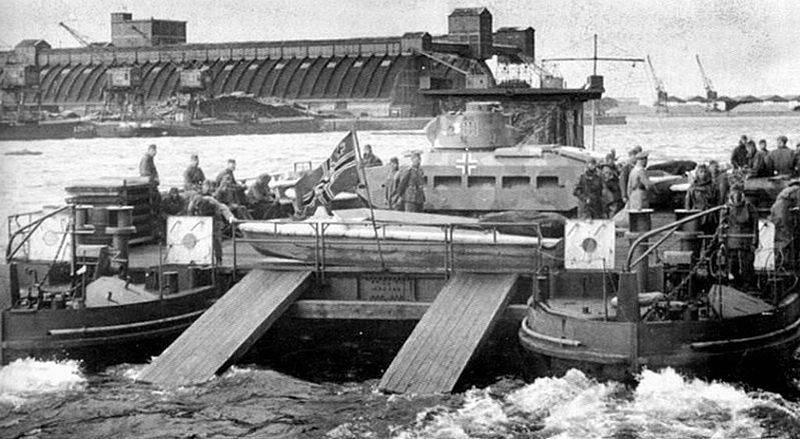 The power plant was combined. And it included 4 car engines, which were installed in pairs in the left and right floats.

Each pair of engines ran on its own propeller with a diameter of 60 cm. Usually, two types of car engines were used: a licensed version of the 78 hp Ford V-8. from. or “Opel Blitz” with a capacity of 68 liters. from.

The basis of the power plant on the SF40 version was made up of three deformed aircraft engines BMW-VI with pushing propellers (in total 660 hp).

The use of aircraft engines on ferries was quickly abandoned.

First, they made so much noise that it was simply impossible to talk while on deck.

Secondly, three aircraft engines consumed too much fuel. Crews preferred to launch them only in exceptional cases.

Already in 1941, the ferry was tested with an additional outboard motor, but without aircraft engines. The speed decreased by only a couple of knots, while the removal of the aircraft engines from the ferry increased the usable deck space and the carrying capacity, which increased to 70 tons (or 250 soldiers with weapons). The version received the designation SF41.

At the same time, it was precisely as Siebel ferries that the versions equipped only with propellers were better known.

These ferries have added a little more in size. The length of the floats reached 24–26 meters. The width remains the same. The empty displacement increased to 130 tons. And the maximum carrying capacity is up to 100 tons. 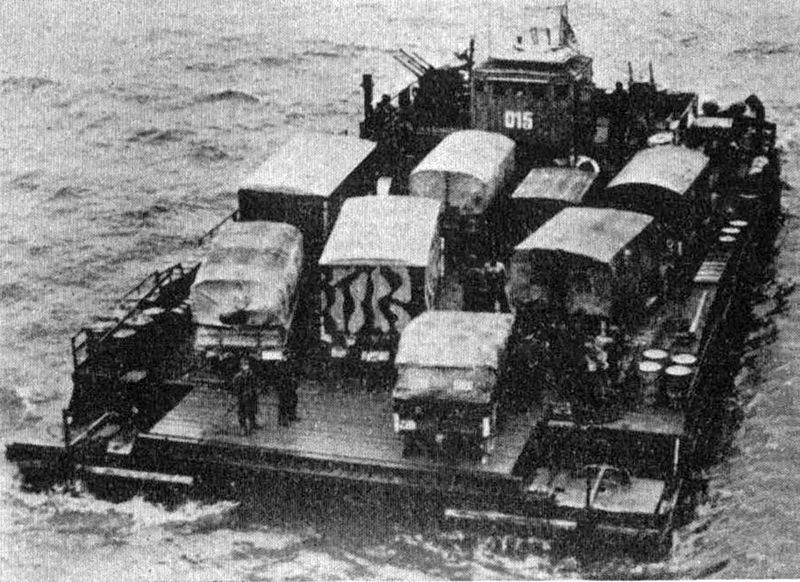 As a power plant, two derated aircraft engines from BMW were used. To preserve engine life and fuel economy, their power was reduced to 240 liters. from. Each of them was completely located in the body of the float and worked on its own propeller. The speed of such catamaran ferries was 6-7 knots. And the cruising range reached 116 miles. At the same time, by 1944, this figure was already brought to 285 miles.

Since 1943, the production of the larger Siebel ferries (Siebelfahre) began.

The main difference from its predecessors was the appearance of a streamlined nose on the model. This decision made it possible to increase the speed of ferries to 11 knots (20.4 km / h), although it worsened the manufacturability of the design and ease of manufacture.

The 1943 models were the largest of all ferries. Their length reached 32 meters. The empty displacement increased to 143 tons. Carrying capacity – up to 169 tons. At the same time, the maximum draft of the vessel also increased – up to 1.75 meters.

Quite quickly, the Germans decided to use the landing craft both as floating air defense batteries and as artillery support ships. 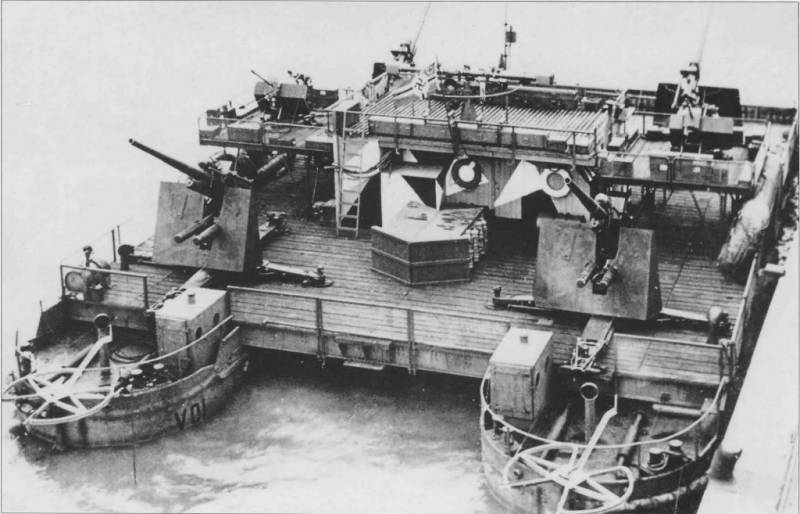 The next step was the appearance of light and heavy air defense ferries.

In the version of the heavy air defense ferry (Siebelfähre 40 Schwere Flakkampffähre), up to 3-4 of the famous anti-aircraft 88-mm guns were installed on the catamaran, which could be supplemented with auxiliary fire weapons. For example, two 20-mm anti-aircraft guns.

On such ferries, only the wheelhouse was booked. The armor of its walls was 10 mm. The shields of the 88 mm flasks had the same thickness of armor, the rest of the hull was ordinary structural steel. The crew of such ferries reached 47 people.

In the version of the light air defense ferry (Siebelfähre 40 Leichte Flakkampffähre), the armament was represented by small-caliber artillery. Since 1942, the following armament has been massively used: four “firlings” (quad 20-mm C / 38 assault rifle – the naval version of the Flakvierling 38), placed on the bow and stern sections of the ferry. As well as one 37 mm Flak-Lafette C / 36 automatic gun (naval version of the FlaK 36 mount) on the central superstructure. The crew of such a ferry reached 42 people. 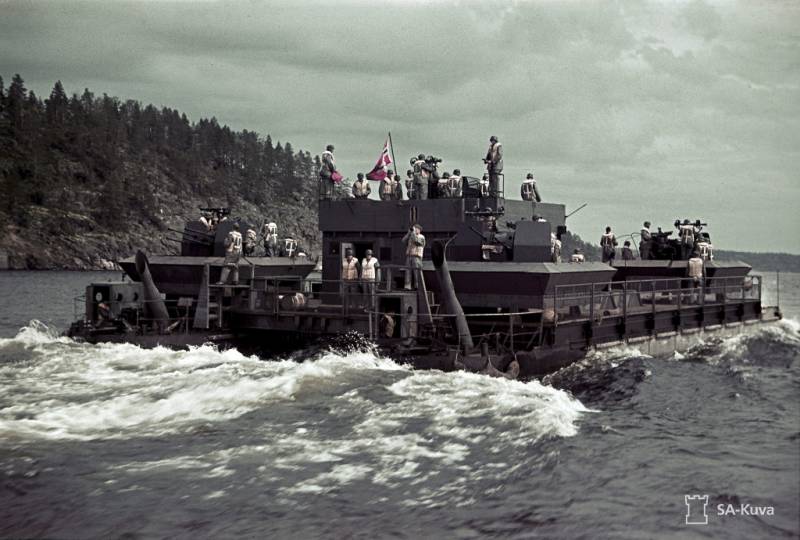 At the same time, the composition and number of weapons changed frequently.

From the photographs that have come down to us and newsreels, we can talk about a variety of combinations of small-caliber anti-aircraft artillery and 88-mm anti-aircraft guns.

At the same time, even in the version of the light air defense ferry, the composition of the anti-aircraft armament of the Siebel ferry approximately corresponded to the destroyers of those years.

Siebel’s versatile combat ferries turned out to be somewhat more expensive than originally planned. And their design has become more complex over time.

But, despite this, they played their role in the war, having established themselves as a universal combat means. They were used to transport troops and cargo, as air defense ferries and artillery support, and even in the version of minelayers.

Ferry production was carried out practically throughout the entire war. The manufacturability of the design made it possible to assemble Siebel ferries even at small enterprises. Including on the territory of the countries occupied by the Nazis.

Between September 1940 and 1945, at least 393 Siebel heavy ferries were built. At least a series of Siebel-type amphibious catamarans (according to sequential numbering) ended on the SF-393 ferry. 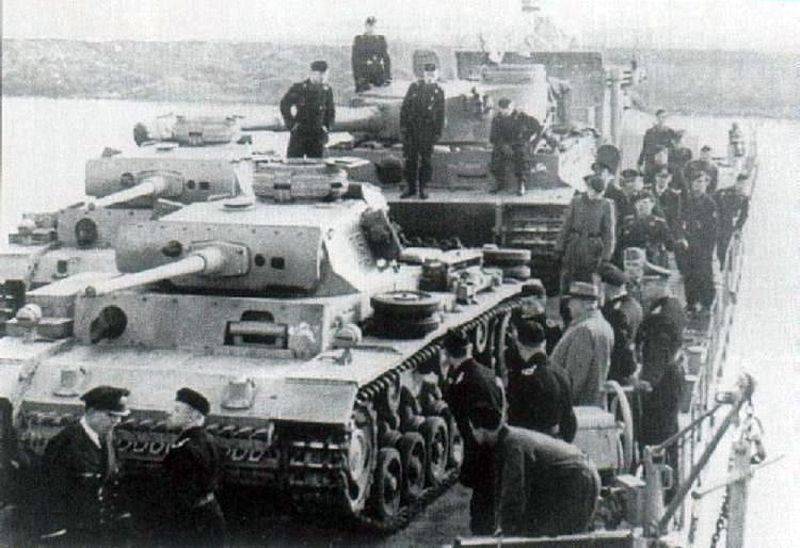 Siebel’s ferries, designed for the transfer of troops across the English Channel, were eventually noted in all theaters of operations in Europe.

They were used in the Mediterranean and Black Seas, and fought in the Baltic.

The possibility of disassembling and transporting ferries in the form of separate sections by rail made it possible to use the “Siebel” and on the lakes. In particular, they managed to fight on Ladoga and Lake Peipsi.

At the same time, the main disadvantage of ferries throughout the war was not their technical features or design flaws, but departmental affiliation. The ferry created by the engineer of the Luftwaffe was produced for the German Air Force and was subordinate to the department of Goering with all the ensuing consequences.

The crews of such ferries did not have proper maritime and navigational training, which was most clearly manifested on Ladoga in the summer-autumn of 1942. Operation Brazil carried out here in October 1942 ended in complete failure. A squadron of 38 pennants that went to the island of Sukho, which included 11 Siebel artillery ferries (7 heavy and 4 light), three transport, headquarters and hospital ferries, ended in nothing. At the same time, the Germans suffered significant losses in people and equipment. 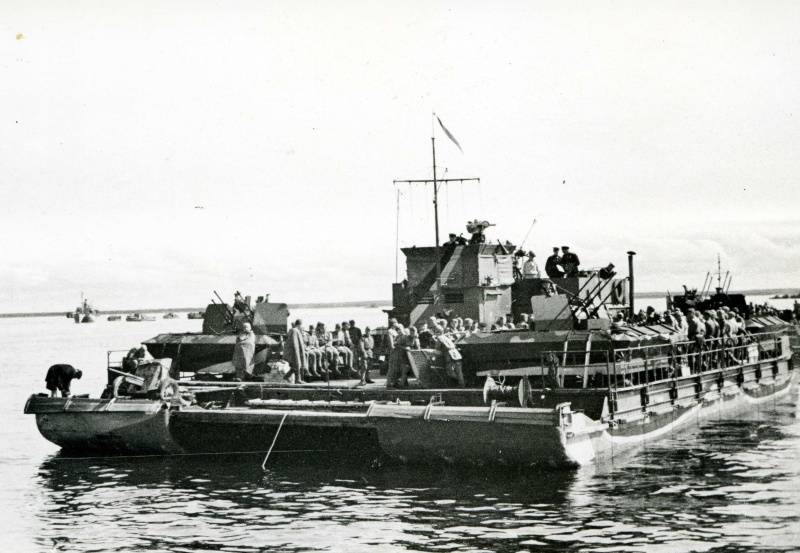 The Siebel ferries were mainly used for their intended purpose.

Since 1943, they have been actively used to transport troops and cargo. But no longer for the landing of assault forces, but for the evacuation of German troops, which were retreating on all fronts under the blows of the Allied armies.

At the same time, some of the captured ferries in the USSR were repaired and used in operations against the Germans.

The most formidable variants, armed with the famous 88-mm anti-aircraft guns, were used as floating air defense systems, as well as in the role of escort or strike ships.

But in the role of the latter, they were used much less often, unlike their naval colleagues – lighters of the MNL type, which in the Soviet, and then already in the Russian classification, are better known as high-speed landing barges.