Electric propulsion systems are actively used in modern unmanned aerial vehicles and provide high flight performance. Further growth of key parameters can be achieved by using solar energy. A number of experimental solar-powered UAVs have been developed – but none of the projects has yet been brought to full-fledged operation with the solution of real problems.

With the participation of NASA

At the turn of the seventies and eighties, the American company AeroVironment was conducting research in the field of solar energy for aircraft. In 1983, she received an order from NASA to create an experimental UAV capable of showing high performance characteristics. The first project of the new series was named HALSOL (High Altitude Solar). It was later renamed Pathfinder.

In the same year, the first flight of an experienced drone took place, but the tests were recognized as unsuccessful due to the insufficient level of development of key technologies. Finalization of the project continued until 1993, when the tests were resumed. Soon enough, Pathfinder showed all the benefits of new technologies and components. Over the years, the UAV has set a number of altitude and flight duration records for solar-powered vehicles. 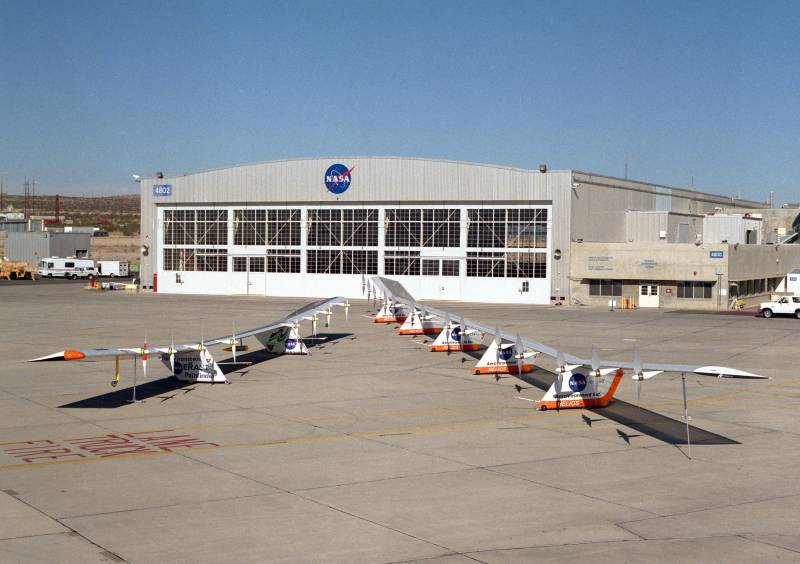 Enhanced Pathfinder Plus (left) and newer Helios, 1999 Photo by NASA

In 1998, an experienced drone was upgraded according to the Pathfinder Plus project. The redesign and the introduction of new electrical components have allowed the performance to be improved again and new records have been set. In the same period, the Centurion and Helios Prototype UAVs were created with a similar appearance, but with different characteristics.

Experienced UAVs from NASA and AeroVironment were built according to the general scheme. The main design element was a large aspect ratio wing with a span of 29.5 m (Pathfinder) to 75 m (Helios). On the wing, electric motors with pulling screws (from 6 to 14 units) and nacelles with a landing gear and equipment were installed. All vehicles in the series had remote control and could carry some payload.

The largest possible wing area was given over to solar panels. In the Pathfinder project, they delivered 7.5 kW, and in the later Centurion they managed to get more than 30 kW. Rechargeable batteries were used as a backup power source. Fuel cells were also used in later experiments.

Helios is on trial. Photo by NASA

Experimental drones did not have a high flight speed. The large-span straight wing limited this parameter to 30-45 km / h. At the same time, record flights were made at altitudes of 24-29 km and lasted at least 12-18 hours.

Since 2003, work has been carried out on projects of the Zephyr series. Initially, the new UAV was created by the British company QinetiQ, but later the work was transferred to the Airbus military department. The goal of the project was to create a high-altitude solar-powered drone with a long flight duration, capable of carrying surveillance equipment.

In the middle of the decade, tests began on a reduced technology demonstrator apparatus. Zephyr 6 demonstrated the potential of the design as a whole and its individual elements. In 2008, this UAV climbed to an altitude of 19 km. Then came the full-size Zephyr 7 prototype. In July 2010, it set a flight duration record of more than 14 days. In 2018, another prototype, Zephyr 8 (Zephyr S), remained airborne for almost 26 days. 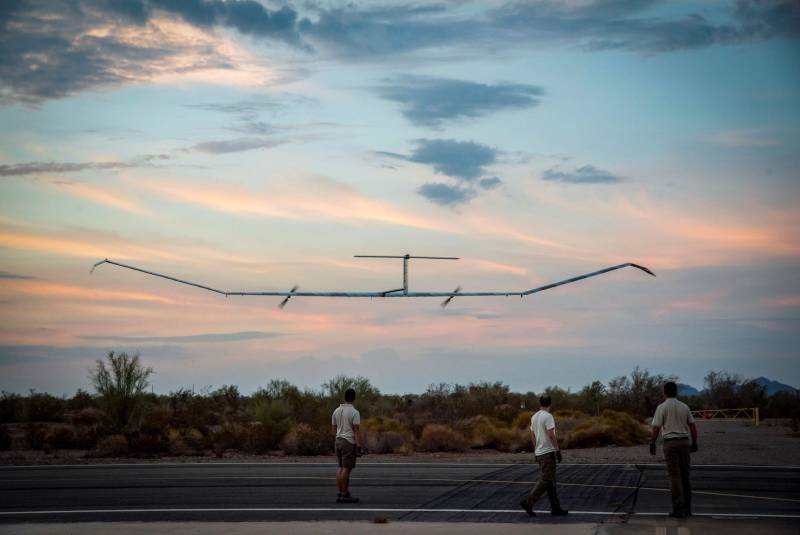 UAVs of the Airbus Zephyr series receive a large aspect ratio wing with raised tips. The wingspan of the largest Zephyr 8 reaches 28 m. The weight is up to 50-70 kg, of which no more than 5 kg falls on the payload. Electric motors are located on the leading edge of the wing; a thin tail boom with plumage is attached to the rear. Almost the entire upper surface of the wing is given over to solar panels. In addition, the UAV has accumulators for flight in the absence of sunlight. The flight speed does not exceed 50-60 km / h, however, the goal of the project was to obtain a high range, altitude and duration.

Development of Zephyr series projects continues. The improvement of existing machines is carried out in order to fulfill real tasks, as well as new samples with different characteristics are created. At the moment, such UAVs are considered as carriers of surveillance equipment, electronic equipment, etc.

From manned to unmanned

Of particular interest is the Solar Impulse project of the Swiss company of the same name. He proposes the construction of solar-powered manned aircraft. Since 2009, two similar machines have been participating in flight tests. Over time, the development company announced its intention to create an unmanned version of the existing aircraft. 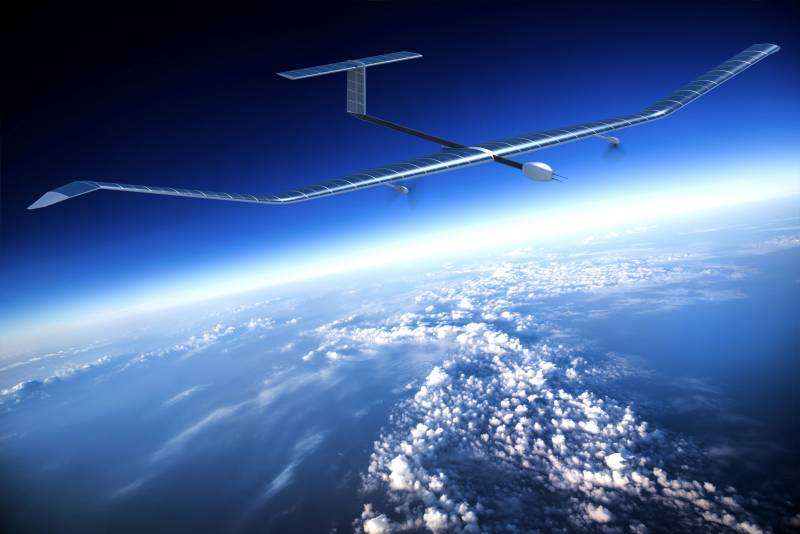 Flying at high altitude as an “atmospheric satellite”. Airbus graphics

In November 2019, Solar Impulse, with the assistance of Leonardo and Northrop Grumman, completed the conversion of one of the prototype aircraft into a UAV. Flight tests were scheduled for 2020-21, and in the early twenties, it is possible to launch small-scale production in the interests of real customers. It is believed that such a drone has a competitive advantage in the form of high performance characteristics.

Solar Impulse 2, rebuilt into a UAV, has a straight wing with a span of 72 m, under which a lightweight fuselage and four nacelles of electric motors are installed. A combination of solar panels and accumulators was used; peak power 66 kW. The plane developed a speed of up to 140 km / h and climbed 12 km. The design characteristics of the unmanned modification will be higher. In particular, the flight duration is going to be increased to 90 days.

In recent decades, there has been significant progress in the field of solar UAVs. New types of panels, batteries and electric motors with improved characteristics are being developed and introduced; modern materials are used in the construction of airframes, ensuring durability and low weight. At the same time, despite all efforts, such drones have not yet reached full-fledged operation. 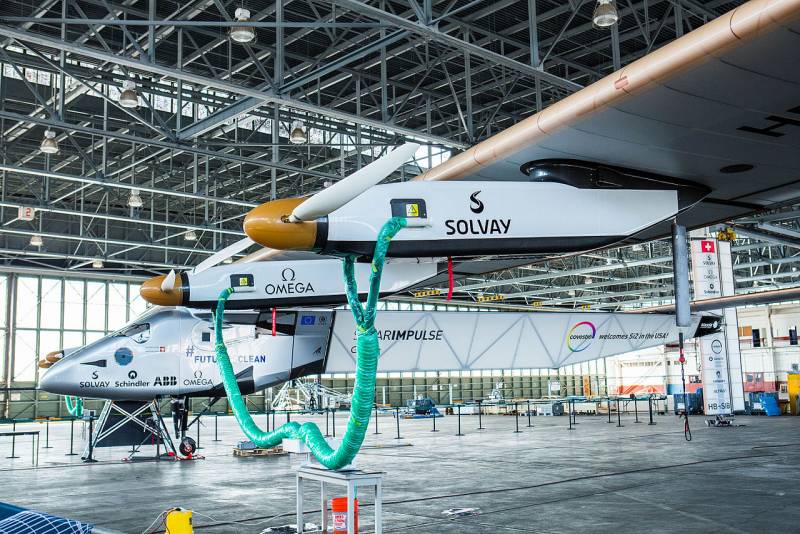 Despite all the efforts of scientists, solar panels are not yet very powerful. As a result, they have to give the maximum possible area for them while simultaneously lightening the structure. Only under such conditions is there enough energy to power the motors and recharge the batteries. In addition, measures are needed to maintain the power supply to the motors regardless of the intensity of the incident light or in its absence.

As a result, a manned aircraft or UAV, built even with the use of advanced technologies, turns out to be large and expensive, but cannot carry a significant payload. However, it is capable of showing high flight characteristics and therefore is of certain practical interest.

The ability to fly for a long time at high altitudes can be useful when conducting reconnaissance or monitoring the situation in different situations. Projects are also proposed for “atmospheric satellites” – unmanned aerial vehicles of long duration of flight with equipment for relaying radio signals. Such technology is expected to be able to stay in a given area for a long time and provide constant communication, being an easier and cheaper replacement for spacecraft. 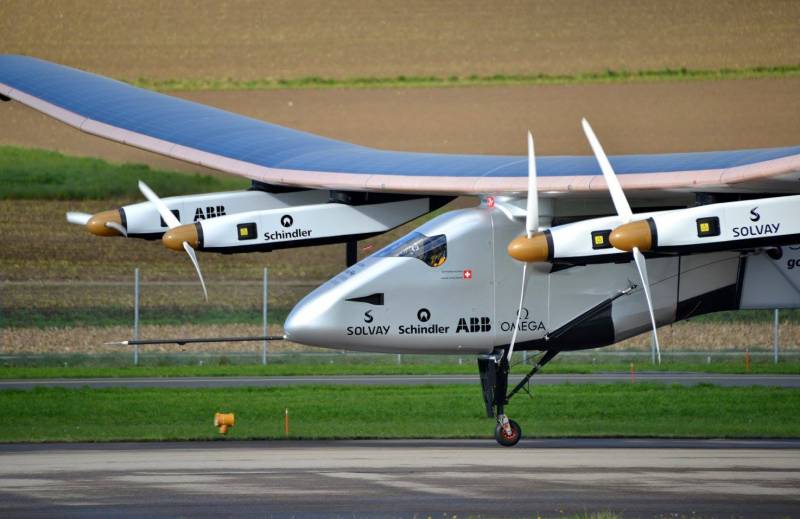 Obviously, at the current level of tactical and technical characteristics, solar-powered UAVs cannot be combat ones. The limited carrying capacity will not allow taking large ammunition, and the characteristic appearance will increase the visibility for any detection means. However, reconnaissance drones and repeaters can also be of interest to armies.

Solar UAVs are under development in several countries and there has been significant progress. The characteristics of such equipment are gradually increasing, and in the foreseeable future, the first samples are quite capable of reaching real operation. However, this direction should not be overestimated. In practice, such drones are likely to become an effective means of filling specific niches in which they can realize their full potential and not show inherent disadvantages.