The British STEN submachine gun was distinguished by its extreme simplicity of design and low cost of production. Thanks to this, the production of such weapons was able to be established not only in Great Britain, but also in other countries. Moreover, in 1944, even Nazi Germany began to produce its own versions of the submachine gun. However, such an attempt to save money did not affect the general course of the war.

In 1941, British factories mastered the production of the first model STEN submachine gun, and a few months later a modernized version appeared. In the shortest possible time, they managed to re-equip their own army and begin preparations for new operations. Already in August, an unsuccessful raid on Dieppe took place, during which the British suffered heavy losses. As a result of this battle, the German military were able to get acquainted for the first time with a number of enemy developments, incl. with a new simplified submachine gun.

From a certain time, Great Britain began to support the Resistance units in the occupied countries. Various cargoes were delivered to them by air, incl. weapons. The cheap, simple and compact STEN, capable of using captured German cartridges, turned out to be a handy novelty for the partisans. 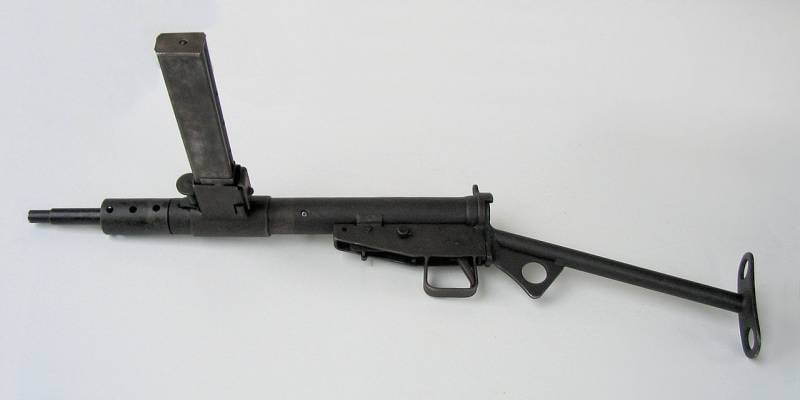 However, not all “parcels” reached the Resistance. Thus, a significant part of the cargo for the French partisans was discovered by the Germans. The captured weapons were sent for storage to the Paris office of RSHA. From there, trophies were shipped to various rear and police units, for which there was not enough German production. The STEN Mk I entered service as MP-748 (e), and the Mk II product was designated MP-749 (e).

Initially, German experts were skeptical about the British submachine gun, since the oversimplified design showed low performance. However, in the face of a lack of own weapons, the shortcomings of trophies had to be closed, and they became a real alternative to the scarce MP-38/40.

In the summer of 1944, after the Allied landings in Normandy and further advance deep into France, the number of captured weapons sharply decreased – in contrast to the needs of the German structures. Therefore, at the beginning of autumn, it was decided to launch its own production of a copy of the STEN Mk II product. Such a copy was named Gerät Potsdam (“Product” Potsdam “).

In September 1944, Mauser received a special order. She had to copy the captured submachine gun and set up its production. In addition, it was required to develop two sets of technical documentation with different features. The first was intended to be transferred to large arms factories with developed production capacities, and the second was planned to be distributed between small factories with limited capabilities.

The Potsdam submachine gun was an exact copy of the British STEN Mk II with minimal technological differences. This allowed us to get the desired features, although it led to some problems. First of all, Potsdam retained all the shortcomings of its prototype. In addition, the copied weapon, despite the unification of the cartridge, could not use the standard German magazines from the MP-38/40. Cost was another issue. One submachine gun cost 1,800 Reichmarks. For comparison, the StG-44 assault rifles in the series by that time cost less than 100 marks.

Some sources mention that all the smallest details were copied, right down to the marking. From this it is concluded that Gerät Potsdam plans to use sabotage under false flag, etc. However, reliably known German-made submachine guns do not have the characteristic British brands. In addition, the only goal of the project was to produce the cheapest and simplest weapon possible.

The documentation was ready in mid-October, and immediately after that an order for 10,000 items appeared. By the end of November, 5,300 submachine guns had been manufactured at the Mauser, and another 5,100 units were produced in December. The ordered 10 thousand were shipped to the armies, and the fate of the remaining 400 Potsdam is still unknown. At the same time, the Hänel plant launched the production of stores and by the end of the year produced almost 17 thousand units. Another 22.5 thousand stores were released in the first months of 1945.

Neumünster instead of Potsdam

On November 2, 1944, when production of Potsdam was just starting up, Mauser received a new order. Now she had to rework the existing design in the direction of further simplification and reduction in cost. When the project was ready, it had to replace its predecessor in production. As before, it was planned to establish production at developed factories and in small workshops.

In the documents, the new project was referred to as Gerät Neumünster. Later, the incorrect designation MP-3008 became widespread. This index comes from the order number of November 2, which asked the development of weapons – “1-3-3008”. Officially, this designation has never been used. 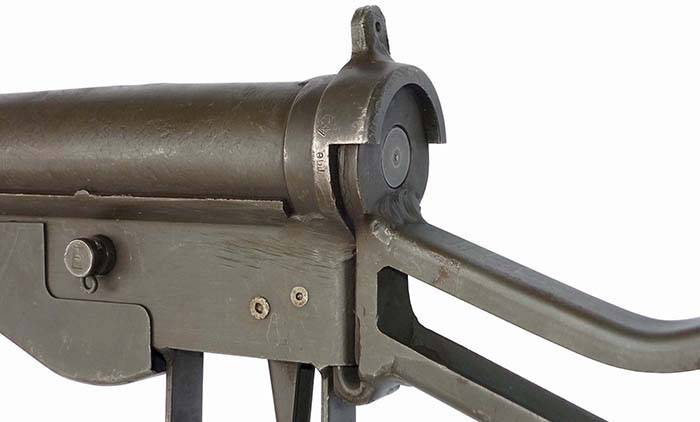 The rear of the Potsdam receiver. Photo Smallarmsreview.com

In order to simplify the design, the barrel mount was redesigned. On the STEN Mk II, it was secured in the receiver with a nut. The Neumünster used a bushing with pins instead. The receiver was extended for a new spring. The rotary magazine receiver, which also served as a protection for the ejection window, was made immovable and converted into a magazine from the MP-38/40. Its neck was now under the receiver, and the window for the ejection of cartridges remained on the right. In connection with the transfer of the store, the shutter had to be redone. Trigger, controls, butt, etc. left unchanged.

The development and fine-tuning of Neumünster took only a few weeks. By the end of November, the submachine gun was ready for release at any factories in Germany. The first order appeared on November 15th. The army wanted to get 1 million units. weapons with delivery until March, 250 thousand a month. At the end of November, an additional order for 50 thousand items appeared for the newly created Volkssturm.

However, the fulfillment of these orders ran into difficulties. The continued production of Potsdam, a shortage of materials and general difficulties of that period led to the fact that the mass production of Gerät Neumünster on the Mauser could not be launched until the beginning of 1945. Up to 30 other organizations were involved in production, but they also did not succeed. In addition, during the tests, various problems appeared, and the army began to plan the development of another sample, devoid of the flaws of the Neumünster.

By the beginning of 1945, customers revised their plans for the supply of Neumünsters. Starting in January, the monthly release of submachine guns was assigned to only 10 thousand units. In the spring it was planned to double it, and in the summer to reach rates of up to 250 thousand per month and by the fall to release the desired 1 million items.

In the winter of 1944-45, the army had to deal with the production of ammunition. In order for each of the million ordered submachine guns to have three loaded magazines, 96 million rounds were required. In this regard, in December there was a requirement to increase the production of 9×19 mm “Luger” cartridges by 150 million pieces. per month. As in the case of weapons, these requirements could not be met.

A submachine gun with a frame stock manufactured by the Eickhorn plant. Photo Modernfireams.net

It is not known how many enterprises managed to establish the production of Neumünster submachine guns. The general release of such weapons also remains uncertain. According to various estimates, from December 1944 to April 1945, it was possible to collect from several hundred to 45-50 thousand units. Apparently, the real number of weapons is closer to the minimum estimates. So, among the known copies, the largest serial number was found for a product from the Blohm & Voss plant – “232”. It is unlikely that other enterprises were able to reach the four- and five-digit numbers.

Production was carried out at several enterprises with their own technological characteristics. Known samples from different factories differ markedly from each other. So, some submachine guns received a receiver from a pipe, while others used a bent and welded sheet. The contours of the units and the fittings were very different. For example, the mentioned submachine gun “232” from Blohm & Voss had a full-fledged wooden grip instead of a protrusion on the buttstock. Models with a wooden stock are also known.

In 1944, Hitlerite Germany faced the problem of a shortage of small arms and began to search for alternatives to the models available in the series. One of the solutions to this problem was the copying of the most simple design of a foreign model. However, this did not allow meeting all the customer’s requirements – Gerät Potsdam and Gerät Neumünster could not be produced in large quantities, and their cost turned out to be unacceptably high.

Another disassembled product from Eickhorn. It can be seen that the receiver is bent from the sheet. Photo Smallarmsreview.com

The reasons for this are quite simple. The STEN submachine gun was created by the British industry, taking into account the available resources and production capabilities. By optimizing the design and manufacturing technologies, it was possible to reduce to a minimum the costs of materials, labor and money. Germany, copying STEN, was forced to start production virtually from scratch and could not use the backlog of its own designs.

All this led to obvious difficulties, the struggle with which required a lot of effort, time and money. Moreover, all these problems arose in the most difficult period for Germany, when its defeat was already a matter of time – and any unjustified spending worsened the situation. It should be recalled that in 1944-45. other models of simplified and cheaper weapons were also developed, none of which helped to avoid defeat.

The program of copying a captured submachine gun ended in a real failure. With unacceptably high costs, no more than 10-15 thousand units were manufactured in a few months. weapons that could no longer affect the course of the war. Meanwhile, the UK and other countries were releasing tens of thousands of STEN submachine guns every month, supplying the army with weapons and avoiding unnecessary spending.