The most powerful naval formation in its region is deservedly considered the Caspian Flotilla of the Russian Navy. In recent years, the flotilla has received a lot of new ships and vessels, which has a positive effect on the combat effectiveness of its surface forces. Now there is a gradual development of the coastal forces in general and the marines in particular.

Until the beginning of the nineties, the marines were absent in the Caspian flotilla. Only in March 1994, an order appeared on the formation of the 332nd separate battalion of marines based in the city of Astrakhan. In 1998, the battalion became the 600th Guards Battalion. At that time, he was the only part of his kind in the fleet.

In May 1999, the 414th separate marine battalion was formed in the city of Kaspiysk. Soon, in the fall of 2000, serious transformations began. Two battalions were brought together in the newly created 77th Guards Separate Red Banner Marine Brigade. They were supplemented by several other units for various purposes.

As part of the 77th brigade, there were three battalions of the marines (414th, 725th and 727th), the 1200th separate reconnaissance battalion, two howitzer battalions, the 1387th anti-aircraft missile battalion, the 975th communications battalion and 530th separate electronic warfare company. Thus, in the shortest possible time, a full-fledged group was created as part of the coastal forces, capable of solving a wide range of combat missions in different conditions. 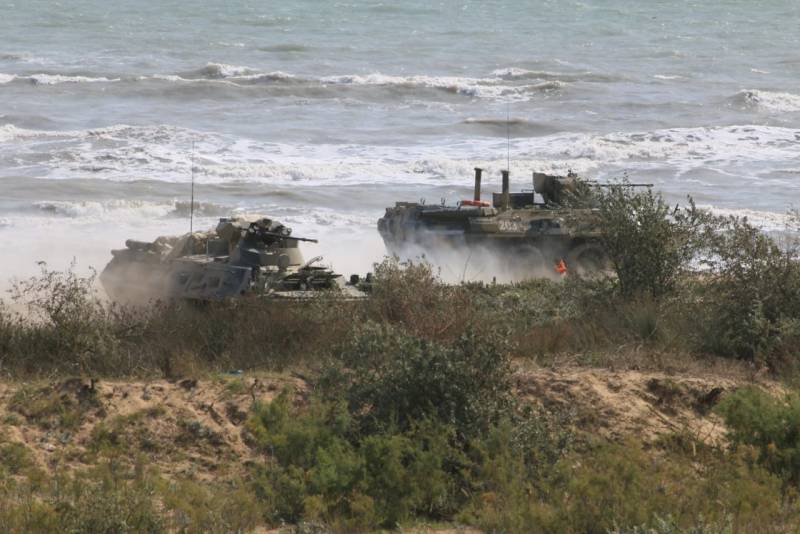 Soon after its appearance, the brigade took part in the battles of the Second Chechen. Various units from its composition regularly went on missions and participated in a number of major operations. The Black Berets have shown themselves in the best possible way. More than 300 servicemen of the 77th brigade received state awards.

The 77th Guards Brigade existed until December 1, 2008, when an order was issued to disband it. In accordance with it, only two separate battalions of marines were left in the Caspian flotilla – the 414th in Kaspiysk and the 727th in Astrakhan.

The reasons for the appearance of the Marine Corps in the Caspian Flotilla are obvious. Further transformations, in turn, were associated with the need to strengthen this type of troops in accordance with emerging challenges and threats – and in conditions of limited resources. The results of such transformations were often far from the desired ones, but gave cause for optimism.

In 2018, the marine corps of the Caspian Flotilla underwent new transformations. On the basis of two separate battalions, the 177th Marine Regiment was created with command in Kaspiysk. On December 1 of the same year, the new regiment began the process of training and performing the assigned tasks. 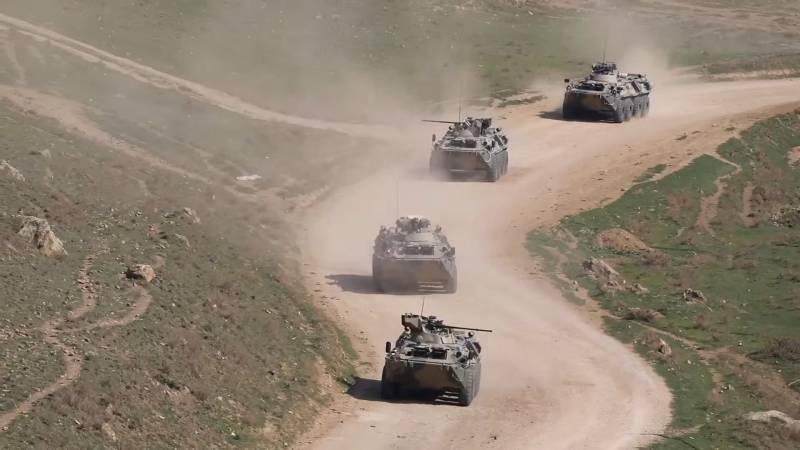 It is curious that this unit is currently the only regiment in the marines of the Russian Navy. In other fleets, “black berets” are organized into brigades, including battalions and divisions.

The 177th Regiment is a full-fledged force capable of operating on land and on water. The battalions are equipped with all the necessary equipment and weapons. The basis of their fleet of equipment is modern armored personnel carriers BTR-82A. There are self-propelled guns “Nona-M” and towed howitzers D-30. Armed with unmanned aerial reconnaissance systems. All fighters use the “Warrior” set. Management is carried out using the “Strelets” complex.

Not so long ago, it was announced that another Marine battalion, similar to the existing ones, would soon appear in the 177th Marine Regiment. It was reported that the battalion will include three companies: two marines and one airborne assault. Thus, the battalion will be able to more effectively solve one of the main tasks of a kind of troops – landing on the coast will be carried out both from the water and from the air. 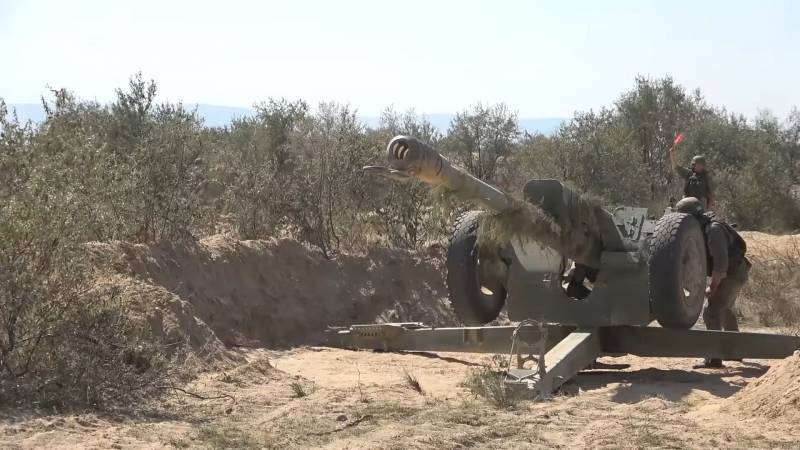 Artillerymen of the 177th Regiment

The formation of the battalion has already begun and is yielding first results. Personnel have been recruited and deployed, combat training has begun. The unit will enter a fully operational state by the end of this year. In terms of its combat potential and capabilities, it will be similar to the other two battalions of the Marine Corps.

Not just the marines

Serious transformations of the marine corps of the Caspian Flotilla began not so long ago, but to date have yielded the most serious results. The number of combat units and the total number of personnel and weapons have been increased. In addition, the modernization of infrastructure and equipment / weapons was carried out, which led to a qualitative improvement in the situation.

At the beginning of this year, a unit with anti-ship missile weapons reappeared in the coastal forces of the flotilla, which had been absent for the past several years. The 51st Separate Coastal Missile Division uses the Ball complex and is capable of providing support to both surface forces and coastal forces.

The “black berets” amphibious assault is provided by the flotilla’s landing craft. At the moment, this grouping includes only eight combat units of three projects. Together, the boats are capable of delivering a battalion of marines with attached equipment and weapons to the shore. There is also the possibility of airborne landing – for this, the military transport aircraft of the Air Force or the own aviation units of the Caspian Flotilla are involved in the operations. 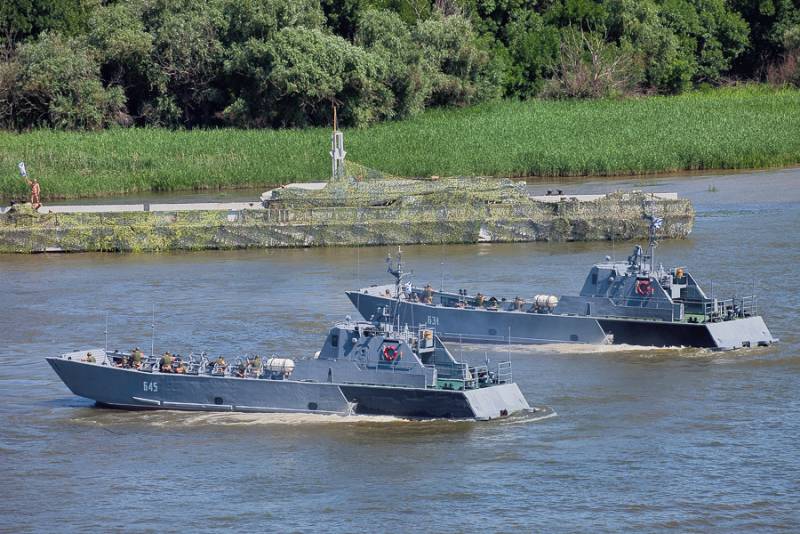 The quantitative and qualitative growth of both the Caspian Flotilla as a whole and of individual structures from its composition leads to the emergence of obvious advantages. The ships and coastal troops of the flotilla turn out to be one of the main forces of the region, and not only at sea. As it became clear a few years ago, the strike weapons of the Caspian sailors can hit targets even in remote areas.

It is likely that the area of ​​responsibility of the reinforced and improved 177th Marine Regiment will not be limited to the Caspian Sea and its shores. If necessary, its battalions and divisions will be able to work in different regions, from the North Caucasus to Central Asia. Such a potential will be useful in combating terrorist threats characteristic of these regions.

It can be argued that the final result of the current measures for the formation of new subunits and units will be the creation of a developed and effective grouping of coastal forces capable of operating in all main environments and solving all the main tasks characteristic of the Caspian region. The basis of any such grouping is the infantry – and in this case, the 177th Marine Regiment, the construction and improvement of which has not yet been completed, becomes the key component of the Russian forces.