Tank to be reckoned with

In the previous part of the story, it was about the analytical report of the Central Research Institute-48, which came out in the second year of the war and related to the lethality of T-34 tanks. There was also another point of view on the peculiarities of the domestic tank. In the pre-war period, the Germans did not have accurate data on the new technology of the Soviet Union, and in a rather peculiar way they estimated the combat potential of the Red Army’s armor.

The journal “Technics and Armament” cites the words of an infantryman, strikingly different from the stated opinion of the military leader:

“There were very fast heavy enemy tanks with a 7.62 cm gun, which fired excellently from long distances. Our tanks are clearly inferior to them. A 3.7-cm anti-tank gun is powerless against them, except at close range, an 8.8-cm anti-aircraft gun – at distances above average. ”

Such a response was received by domestic tanks already during the battles in Ukraine. Such assessments from the soldiers were not uncommon, and German tank theorists needed to do something. 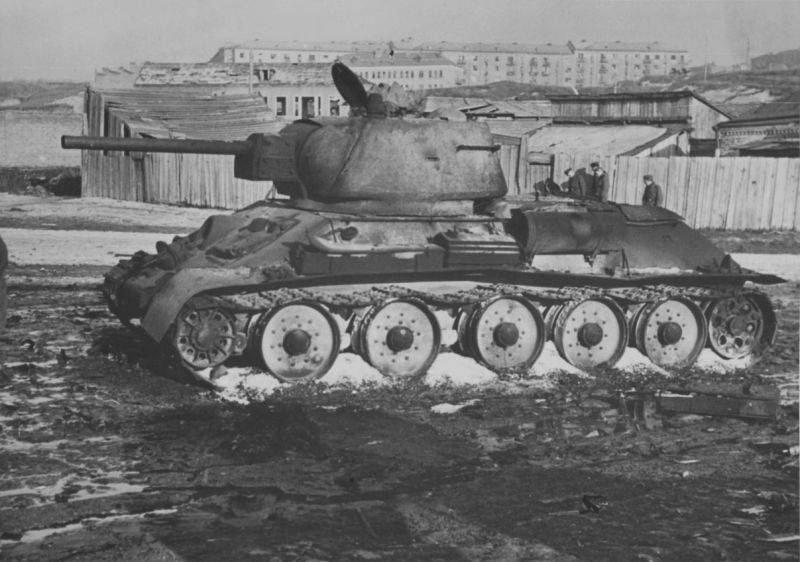 On May 26, 1942, another training manual appeared in the Wehrmacht with the rules of warfare, but now it was devoted exclusively to the fight against the T-34. It contains, among other things, amusing instructions. So, the 50-mm KwK gun was recommended to fire exclusively at the stern and sides of the tank, while directing the projectile perpendicular to the armor. Anyone who was familiar with the contours of the T-34 will understand that for such a focus, either the attacking tank must be on a hill, or the Soviet vehicle must sink aboard. According to the training manual, the 75-mm PaK 40 cannon has proven itself well, which successfully hit the armored mask of the T-34 gun with a Hohlgranate cumulative projectile. Of the tanks, only the T-IV could attack a Soviet vehicle frontally – its armor significantly increased the chances of survival. But the T-III was ordered in no case to go out towards the Soviet machine. Attack only to the side, or better to the stern, and exclusively with PzGr40 shells. For greater importance, it was possible to shower the T-34 with smoke grenades and give the crew the impression of a chemical attack.

In other discussions about the fight against a Soviet tank, the Germans had to dispel myths. For example, about the ability of the T-34 to move without tracks like the BT series tanks. The Wehrmacht anti-tank crews seriously thought that there was no point in shooting at the tracks of advancing tanks: they still would not lose mobility. 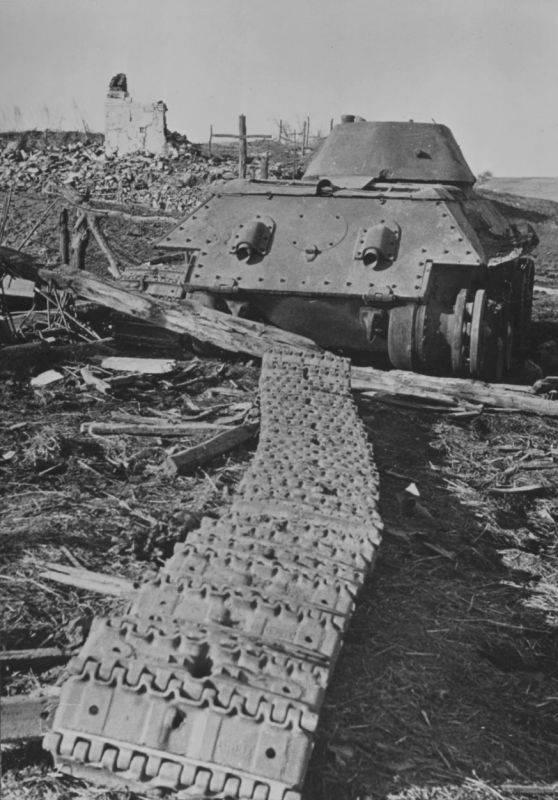 Despite such a flattering assessment of the combat effectiveness of the T-34 on the battlefields of 1941, the Germans themselves explained why the Soviet tankers could not break the resistance of the Wehrmacht. First of all, this is the tactics of spraying tank formations – the complete opposite of the offensive techniques of German armored vehicles. For very many reasons, it was not possible to concentrate the tank formations of the Red Army to break through the defenses of the Wehrmacht. If the first drawback was associated with the operational command, then the second already related to the tactical, technical and layout characteristics. According to the Germans, the weak point was the tank commander, who at the same time fulfills the duties of the gunner, which seriously reduced the effectiveness of the T-34. While the Soviet tank fired one round, the T-IV managed to fire three in its direction! This allowed the Germans to aim more carefully and hit the vulnerable spots of the tank. The T-34 turret rotated relatively slowly, which should have been taken into account by the assault gun crews during the attack. And finally, not all vehicles had the necessary radio transmitter as air, in fact, only the company commander had it. The Germans calculated the leading T-34 in the attacking order and destroyed it in the first place. The rest of the crews, who had lost their commander, were forced to further act in battle without communication, according to the situation. Naturally, this greatly simplified the combat missions for the Germans.

Let’s get acquainted with the conclusions of the first part of the history of the TsNII-48 report, dated in the fall of 1942. How much did German rhetoric affect the lives of the crews and the combat damage of the T-34? As expected, the upper frontal part was the strongest part of the tank. On average, 82% of all hits by German artillery did not pose a significant threat to the tank. Only guns with a caliber of over 75 mm could successfully fight tanks in such situations. At the same time, the 105-mm field gun caused not only through penetrations in the parts, but also breaks with numerous cracks. But the percentage of such fatal hits was less than one. Moreover, every tenth projectile of such a large caliber (105 mm) did not penetrate the forehead of the T-34. But the 88-mm cannon in 100% of cases hit a domestic tank in this projection. In TsNII-48, they did not find a single dent from acht-acht – only penetrating lesions. It is noteworthy that the engineers of the Armored Institute found through holes on the VLD from … a 20-mm cannon! The authors of the report suggested the operation of the sub-caliber projectile. As mentioned earlier, the T-34s were the main targets of the German artillery of all calibers. The guns of the 37 mm and 50 mm calibers coped worst of all with the side armor, all the rest penetrated the tank with a very high probability. Even 20-mm APCR shells were guaranteed to hit sloped armor from side projections. The most exotic defeat of the tank was a shell hitting the roof of the hull – 1 case out of 154. Many vehicles, in medical terms, had combined injuries from fire, artillery and mines. Only 5.9% of all studied T-34s were blown up by mines, but the consequences were fatal: a torn bottom, torn off by the explosion of the turret ammunition and the roof of the engine compartment.

Now about the damageability of the T-34 turret. The Germans, for obvious reasons, fell into it much less often. For example, on 178 tanks studied, not a single trace of 88 mm shells was found on the front of the turret. The Germans got into the specified projection only from 20-mm, 50-mm and 75-mm calibers. Moreover, 70% of all lesions were through. When applied to the sides of the tower, the proportion of dangerous hits increased to 76%. Naturally, the rear of the turret and hull were the least susceptible to attacks: 13 and 19 hits, respectively. Most of them were fatal to machines.

The quality of the armor by TsNII-48 specialists was finally recognized as satisfactory. For high-hard rolled armor, few brittle lesions were recorded – 3.9% (breaks, cracks and splits). The main drawback of the T-34 was recognized by the Armored Institute specialists … the crew! Tankers could not fully use the advantages of the armored vehicle entrusted to them and substituted the sides for enemy artillery fire. Moreover, they were inattentive on the battlefield and missed the firing points of the Germans. All this eventually led the research engineers to the idea of ​​a sharp increase in the tactical training of T-34 crews. However, TsNII-48 still makes condescension and casually mentions some design features of the tank that do not allow full observation of the battlefield. Such statistics of losses and defeats of tanks did not last long: with the advent of heavy German tanks, it became very difficult for domestic armored vehicles on the battlefield. 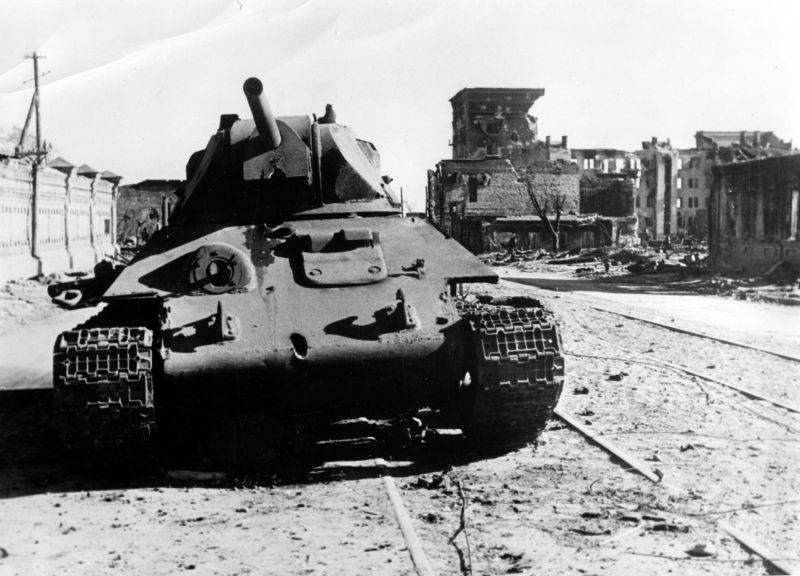 If you move to July-August 1943 in the Kursk region, the statistics will be much more tragic. According to front reports, the main players at that time were the Tigers and, especially in the Oryol-Kursk operation, the Ferdinand self-propelled guns. As a result, the percentage of complete deaths of all types of tanks increased to 65%! This, of course, depends on the number of disabled. For comparison: in the Battle of Stalingrad, the proportion of completely destroyed vehicles was two times less. German 75-mm and 88-mm cannons this time became the real kings of tank battle: they accounted for up to 81% of Soviet tanks from the number of destroyed ones. In total, 7,942 tanks participated in the Oryol-Kursk operation, of which the Wehrmacht knocked out 2,738 vehicles. An unusually large number of cars were blown up, up to 13.5%, with no traces of fire inside. In the future, this indicator increased due to the use of cumulative shells by the enemy, causing the detonation of the ammunition of the T-34 and KV tanks. For example, in November-December 1943, 41% of the destroyed tanks were blown up in the Kursk direction. In many ways, it was such tragic statistics that caused large-scale changes in the design of domestic tanks, which became the gold standard for the whole world for many years.