The combat effectiveness and operational capabilities of a tank unit are largely influenced by logistics and supply issues. In the British army, support tasks were solved with the help of cars, but soon after the outbreak of World War II, the need arose for new means. The answer to this challenge was a special Rotatrailer tank trailer.

From problem to solution

During the fighting in North Africa, British tankers faced a serious problem. The existing tanks did not differ in efficiency, their cruising range did not exceed 250-270 km. At the same time, fuel trucks and vehicles with other cargoes often did not have time to move behind tank units, which made it difficult to supply, and sometimes led to unjustified risks.

These problems were solved in two ways. First of all, the command tried to establish logistics and ensure the timely delivery of all the necessary supplies. In addition, by the end of 1941, the idea of ​​creating a special cargo trailer, suitable for towing by a tank, appeared. If necessary, the crew could use fuel, shells or provisions from this trailer – and return to the task as quickly as possible. 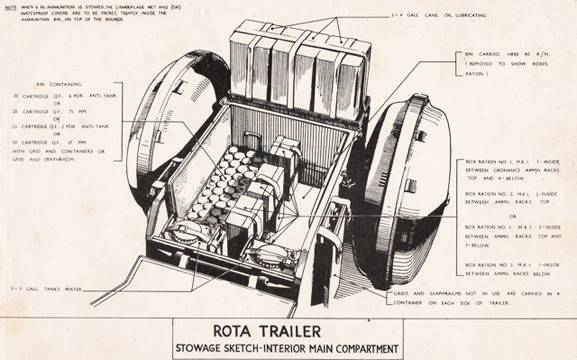 The implementation of this idea was entrusted to the Wheeled Vehicles Experimental Establishment (WVEE) under the Directorate of Tank Design (DTD). Already in January, tests of the first prototype took place, which resulted in a project called Rotatrailer. A few months later, Tecalemite received an order for the first batch of serial trailers.

The Rotatrailer project was based on simple but original ideas. The tank was supposed to pull a two-wheeled trailer with the maximum possible internal volumes. Due to the original design of the hull and wheels, it was possible to ensure the transportation of liquids and “dry” cargo of various kinds – everything necessary for tankers.

The trailer is based on a metal body for the main part of the cargo. The body of steel sheets 3.175 mm thick was rectangular in shape with beveled corners at the top and bottom. The trailer was divided into several compartments. The largest was the front; access to it was provided by a large hinged cover. In the course of the development of the project, this compartment received various equipment for securing certain cargo. Two more compartments were placed in the back and had separate covers. On the top back cover, there is a place for additional cargo in a standard container. 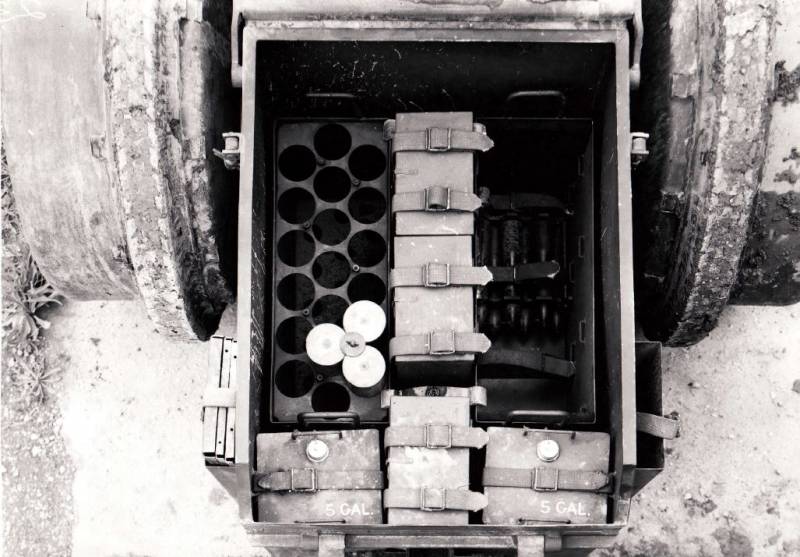 Compartment for ammunition and other cargo. Photo Forum.worldoftanks.com

Two wheels of a special design were attached to the sides of the hull on a rigid suspension. Their hubs had a cylindrical or curved shape, which created a significant volume – it was proposed to pour fuel into the wheel through the side neck. Outside on the wheel was a thin tubeless tire.

For towing behind the tank, the trailer received the simplest drawbar, compatible with the tank hook. The latter was equipped with a remotely controlled decoupling device so that the crew could dump the trailer and go into battle without combustible and explosive cargo behind the stern. The trailer received its own hook on the back sheet, which made it possible to assemble the “road train”.

The Rototrailer had a length of 3.1 m, a width of 1.9 m and a height of less than 1 m. The unladen weight of the trailer was 1.6 t, and approx. 1 ton of various cargoes. British tanks of that time did not have a high speed, and therefore there were no special restrictions on towing. It was also expected that the new product would be able to overcome some obstacles.

The hollow wheel could be filled with 60 British gallons of gasoline – the trailer could carry almost 550 liters of fuel at a time. To work with liquid cargo, a hand pump with sufficient hoses was located in the rear of the trailer. With their help, tankers could refuel wheels from any standard container or pump gasoline into the tanks of their armored vehicles. 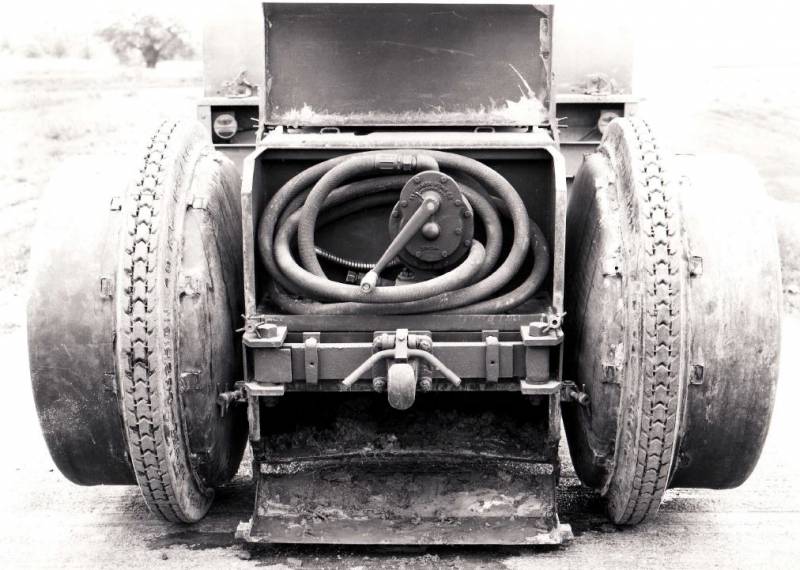 On the roof of the trailer, it was allowed to carry several cans of oil and water with a total capacity of 80 liters. The canisters were placed on guides and secured with slings. However, the presence of such containers made it difficult to access the pump compartment, blocking its top cover.

In the main volume of the hull, cells for artillery shells and places for installing various boxes were placed. In the configuration for tanks with 37-mm cannons, the trailer held 106 shells, and 75-mm shells were loaded in an amount of 40 units. The trailer also held boxes with belts for a BESA machine gun for 900 rounds and several boxes of provisions or other property.

The first tests of the Rotatrailer trailer took place in early 1942 in Great Britain and were generally recognized as successful. All the necessary loads were loaded into the product, and it followed the tug tank without significant problems. However, the trailer was not characterized by high cross-country ability and imposed some restrictions on maneuvering. 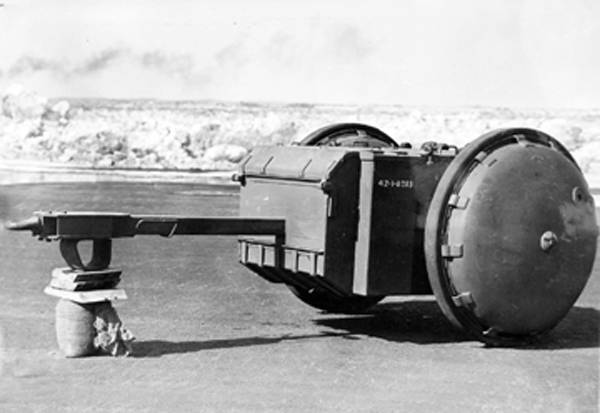 According to the results of British tests, a contract for serial production appeared. In addition, during this period, the new development of WVEE became interested in abroad. The USA wished to independently test the trailer and, upon receiving positive results, establish licensed production.

In the spring of 1942, the serial Rotatrailer arrived at the Aberdeen Proving Ground in the United States for inspection. The events ended in mid-May with negative results. Testers recognized the trailer’s significant capacity and capacity, but criticized other features. The product was not recommended for supply.

During the tests, the Rotatrailer was towed behind the M4 medium tank. He covered 250 miles on dirt roads and 26 miles on rough terrain. The performance on the road or on flat terrain was not bad: the trailer confidently held on to the tank, made turns with a large radius, etc. On all routes, the trailer did not have a tendency to jump and did not tip over even with a large roll. 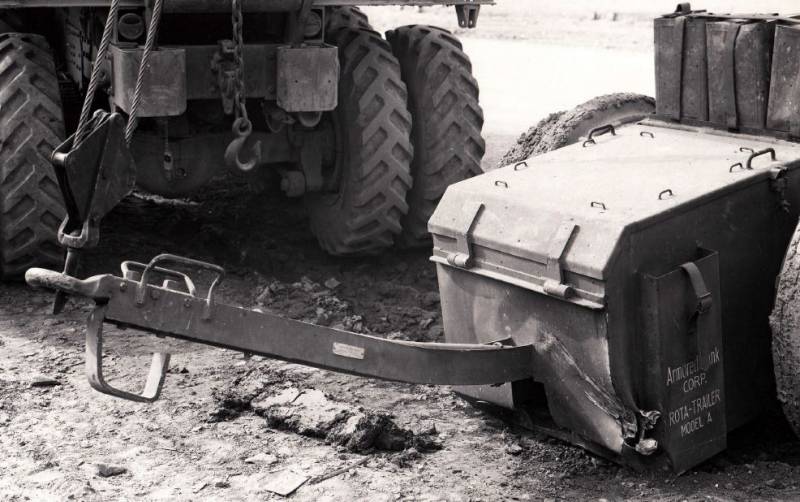 Test crash: unsuccessful attempt to back up. Photo Forum.worldoftanks.com

At the same time, due to constant shocks during movement, the load could be damaged. So, the canisters on the trailer lid leaked after 100 miles. The layout of the cargo compartments and the design of the covers were considered insufficiently convenient. On rough terrain and soft soils, the trailer could bury and collect dirt in some compartments. Tests of the trailer with filling the wheels with fuel have not been carried out. It was also noted that the trailer with dangerous goods does not have any protection against bullets and shrapnel, and the tank’s coupling device did not always work properly.

During the same period, Canada conducted its tests. A Ram medium tank was used as a tug. In terms of their results, the Canadian tests differed little from the American ones. At the same time, the identified shortcomings were not considered critical, and they did not affect the further decisions of the command.

Already in the spring of 1942, Great Britain decided to start mass production of Rotatrailer trailers in the interests of its tank units. According to the results of the May tests, the US Army did not accept the trailer. The Canadian command could not decide until the beginning of autumn, but still made a positive decision. 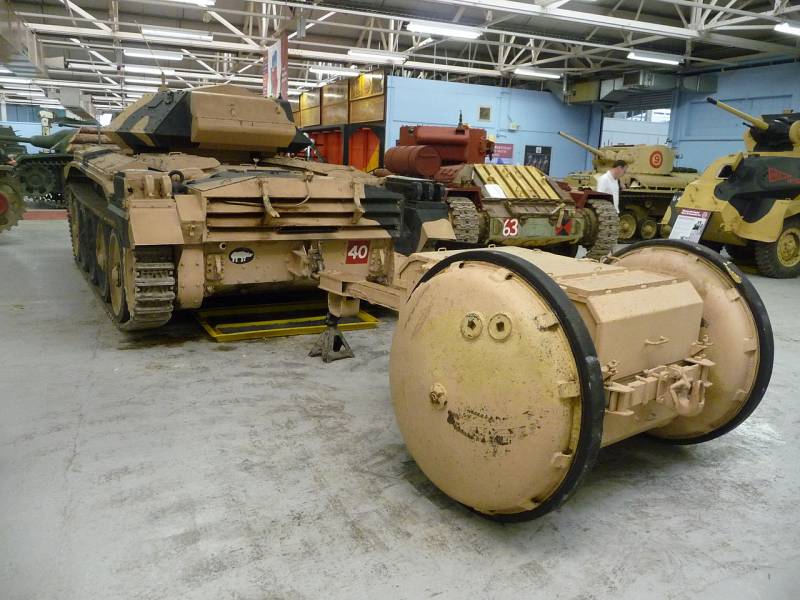 By the autumn of the same year, British tank units fighting in North Africa received the first trailers of a new type. The capabilities of Tecalemite made it possible not only to cover the needs of its own army, but also to supply equipment to Canada, although the export potential was limited to 80 trailers per month. It took several years to fulfill all the requirements of the two armies.

The Canadian command was going to equip all available tanks with “Rotatrailers” – more than 1100 units. In this regard, it was decided not to rely only on the British company and to establish its own production. By the beginning of 1943, several orders had appeared for trailers assembled in Canada and abroad. Before starting production, Canadian specialists finalized the original design, strengthening some of its elements.

In the fall of 1942, British tank units tested the Rotatrailer at the front and were unhappy. In the typical conditions of North Africa, all the shortcomings identified during the previous tests appeared. Poor maneuverability, tendency to breakage, etc. became a real problem and did not allow increasing the autonomy and mobility of tanks. Doubts arose as to the advisability of continuing production and operation. 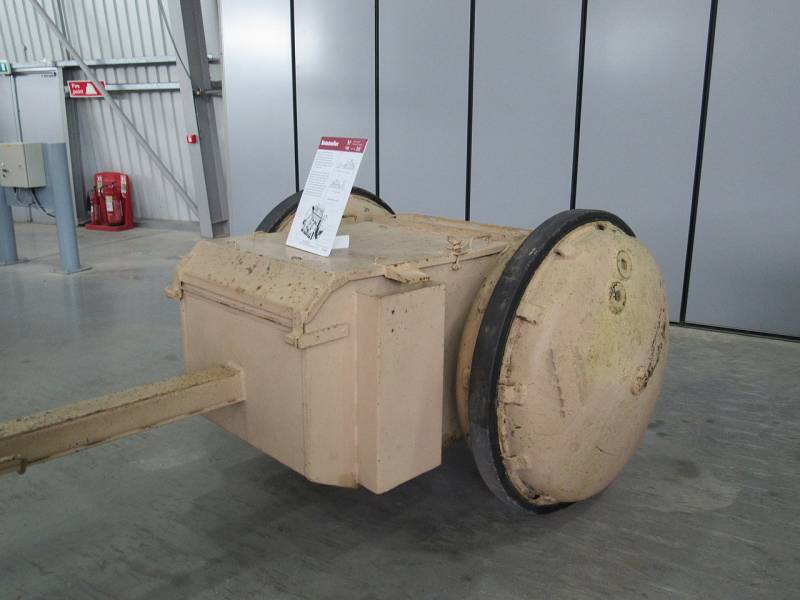 By mid-1943, the command decided that the existing problems could not be solved – and canceled the further production of trailers. In total, they managed to make at least 200 items. They managed to transfer a certain amount of equipment to Canada, and its tankers were also unhappy. The next few months were controversial about the prospects of the “Rotatrailer”. And in November of that year, Canada canceled all orders.

The received trailers were used at the front, but there was no talk of replenishing the fleet. As the operation continued, such products gradually fell out of order – due to breakdowns and from enemy fire. Subsequently, almost all of the remaining products were written off and disposed of. Only a few trailers have survived to this day, which are now museum pieces.

It is curious that the failure of the Rotatrailer project did not lead to the abandonment of the idea of ​​a tank trailer. So, in 1944, the Churchill Crocodile flamethrower tank appeared, transporting the fire mixture in a tank on a trailer with the possibility of transferring it to the tank. Later, a similar trailer was created for the Centurion medium tank. A one-wheeled trailer held several hundred liters of fuel and could transfer it to a tank. Thus, the problems of the first project did not put an end to the entire direction, and it was developed, affecting the combat effectiveness of British tanks.