Uniforms are always interesting. Last time we stopped at the fact that the uniform reform was carried out in the army of the Republic. But the fact was that many of the most diverse volunteer formations of the Popular Front fought on the side of the republic: organizations of different political orientations, united in order to repel the Nazis.

Working overalls (mono), made of gray, greenish and blue cotton tarpaulin, became the usual clothing for the fighters of such detachments, and it was he who also became a kind of uniform for many milisianos, not only men, but also women. Pilots among the Republicans were also very popular, only without tassels, but in the end it was the man in mono and cap that became in Spain the personification of the image of a fighter for the freedom of the republic. 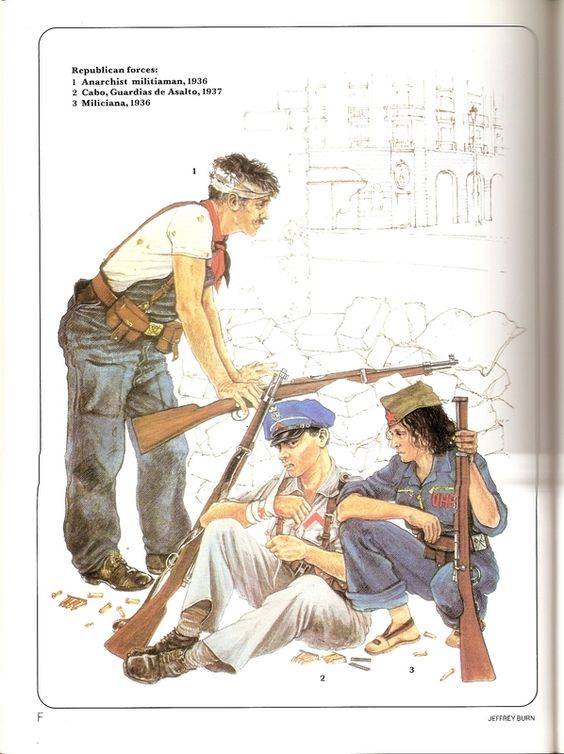 The new insignia also consisted of stars and their combination and were sewn onto the uniform along with braids. The officers were designated by gold horizontal galloon stripes over the toe of the cuff: the captain had three such stripes. The headquarters officers had wider braids, crowned with a red star, under the toe. The brigadier and the sergeant were distinguished by a star without edging and with vertical red stripes above the cuff. The same signs were located around the cap to the left and right of the emblem of the branch of the army, while the star was attached to the crown. The Republican cape had a red chevron with an upward angle at the bottom of the sleeve, but he was not supposed to have a star. 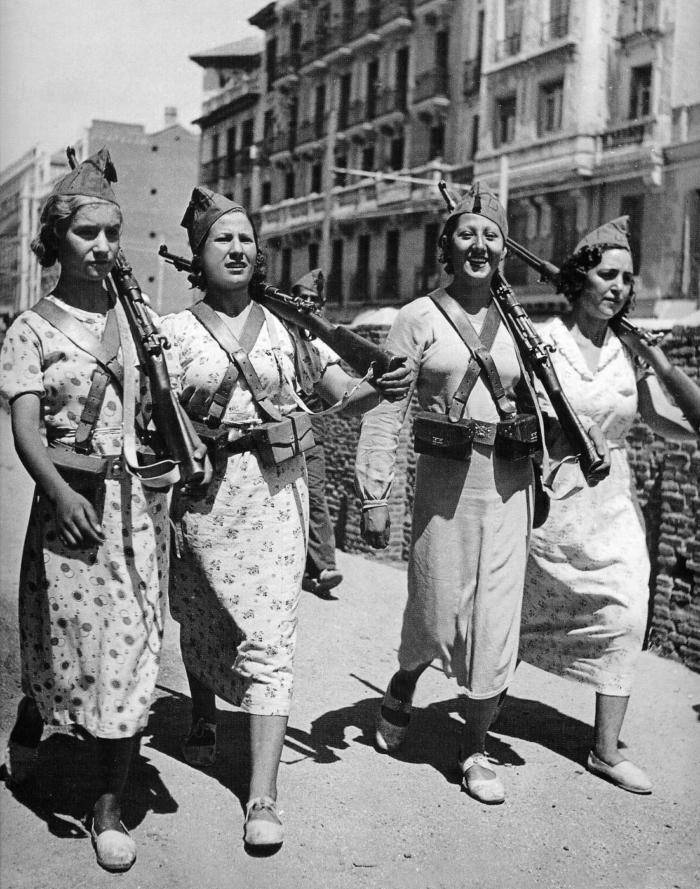 And other Spanish women did not need a uniform at all!

Political commissars had a red star in a red circle and narrow or wide red stripes by rank (by position) under it. They were duplicated on the chest flap and often supplemented with a red neckerchief, so that the commissar was visible from afar! 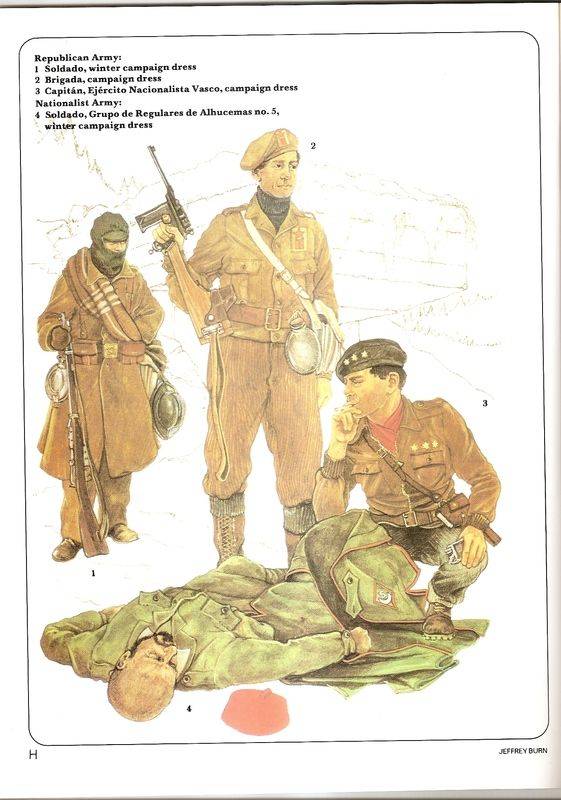 Republican generals wore three red stars on their chests and sleeves, arranged in a triangle, with a golden rod and saber between them. The peaks of their caps (as well as of many officers’) were edged with gold along the edge. The coat of arms of Spain shone in gold in the center of the band in front, but there was a red star on the crown above it. Also, senior commanders and general staff officers wore up to four faceted three-pointed stars, which were attached above the insignia. The brigade commander had one, the corps commander three. The symbolism of the three rays was as follows: socialists, communists and everyone else united against fascism!

The five-pointed star was also used in the Republican Navy.

The officer ranks of the republican pilots were also designated with braids. The pilots had “wings” on their chests slightly higher than the braids, and even higher – a red asterisk. The Air Force emblem was a golden flying eagle, covered by a four-bladed propeller, and looked richer than Franco’s silvery emblem.

The Carabinieri and National Guards also wore blue mono overalls and gray-green caps with red bands. The stormguards had a blue uniform with silver braids, insignia and buttons. True, it was their dress uniform, and in battle they fought all in the same mono, only gray, but in blue caps with silver embroidery. The ammunition was of black or brown leather. The security forces used paramilitary uniforms, but they were easily distinguished by the fact that they were armed with Spanish automatic Mauser “Astra” with a wooden holster-butt.

Many items of uniform, along with everything else, were delivered to Spain by the Soviet Union. Flight and tank helmets, overalls, boots, ammunition – all this went along with the supply of tanks and aircraft.

Here we digress a little and remember how many Soviet military advisers arrived in Spain: people of different military specialties and different nationalities. 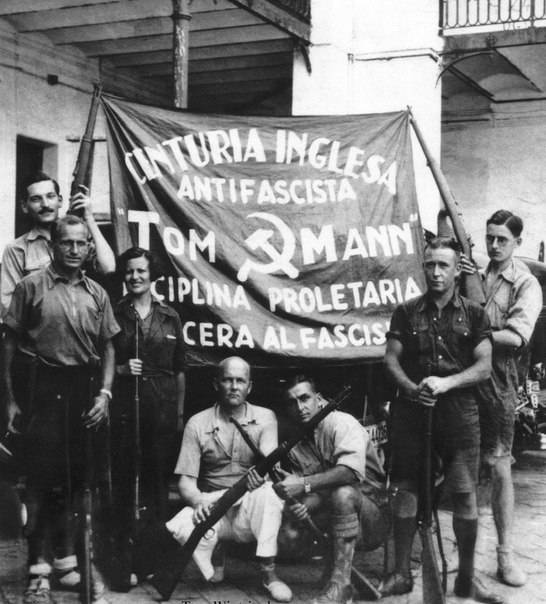 Under the name of General Grishin, the head of Soviet military intelligence, corps commissar Jan Berzin, worked in Spain. Admiral Don Nicholas (as he was called, although he was not an admiral) was actually the naval attaché, Captain I Rank Nikolai Kuznetsov, who became the future People’s Commissar and Admiral of the Fleet. General Douglas, the aviation advisor, was actually corps commander Yakov Smushkevich. Commissioner Pablo Fritz was actually Pavel Batov, military adviser Petrovich was Kirill Meretskov, and Colonel Malino was Rodion Malinovsky. The commanders of the Red Army, the Latvian Paul Armen, the Ossetian Khadzhi Mamsurov, the Italian Primo Gibelli, the German Ernst Schacht and many others fought for the freedom of the Spanish Republic … something – a term in the camp, or even a bullet in the back of the head. A heartfelt book about the war in Spain was written by “Pravdist” Mikhail Koltsov – and what is the result? He was shot in 1940 … 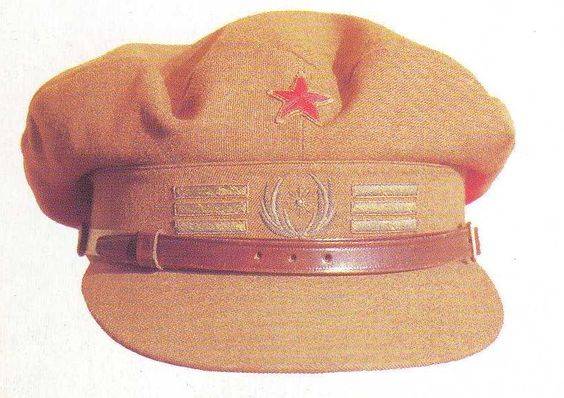 The commander of the XI International Brigade was the Hungarian writer Mate Zalka, General Lukács. Among the Interbigadists were the Germans from the Thälmann battalion, and the Americans from the Lincoln battalion, the British, the French, and the Poles: in total, representatives of 54 countries fought for the republic. Russians from the white emigration were also among them, although there were those who went to fight on the side of Franco. It is clear that many inter-brigade men dressed in the clothes that the Spaniards gave them. But many wore their own. So, many French went to war, taking with them their army tunics, old leather ammunition of the 1916 model, and even just adopted, the 1936 model, and, of course, their own Adrian helmets “the color of the horizon”. The British sewed their Union Jack over their left elbow, and the Germans sported triple Mauser pouches.

But for all the militias and partisans who fought in Spain, uniforms were simply not enough. Militianos women generally wore ordinary dresses, workers wore jackets and plaid shirts, over which they wore bandoliers. Windings were wound over the striped trousers, and, of course, they tried at all costs to get hold of high lace-up boots, leggings and boots. But more often than not, instead of leather shoes, the defenders of the republic had to be content with alpargatas – something like slippers with rope soles. Usually they were put on directly on white socks, wrapped like a soldier at the ankles, and at the same time the shins were wrapped with soldier’s windings. But it happened that they fought on bare feet … 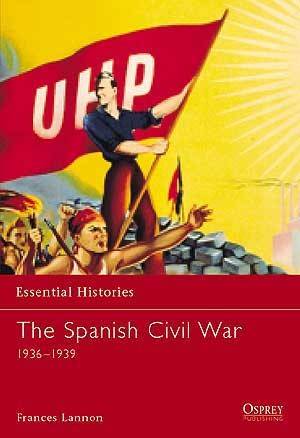 This book is also very interesting to read. And the language practice is great!

Perhaps the most colorful image was the three thousand anarchists of Buenaventura Durruti. They were dressed soundly, but very colorful: they wore both mono and breeches with leather jackets, imitating our commissars of the Civil War. Their main difference was the red and black neckerchiefs, which were sometimes replaced by the red and black stripe on the headdress. Milisianos of the anarchists wore red and black caps on their heads. After watching the Soviet films “Chapaev” and “We are from Kronstadt,” many anarchists began to picture themselves wrapping themselves with machine-gun belts. They also carried a lot of extra weapons on themselves, and all in order to impress the lovely senoritas. And they honored not only Kropotkin and Bakunin, but also Father Makhno, and named their battalions after them. 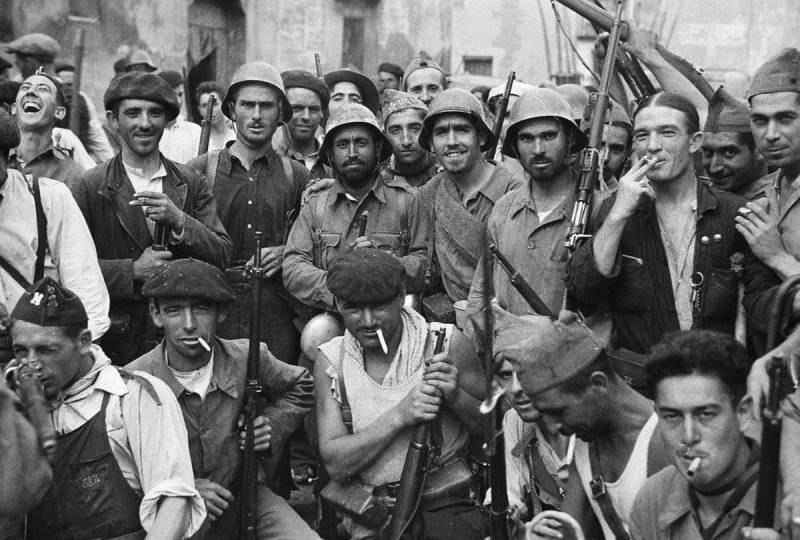 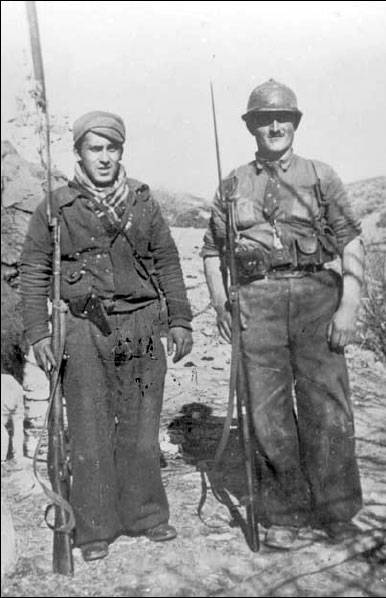 In a helmet and a tie! Soldiers of the Spanish Republican Army, 1937

Trotsky’s supporters also fought on the side of the republicans. Their uniforms bore the letters POUM (Workers’ Party of Marxist Unity) in red, under a red star sewn on their chests. Then, right during the war, they were attacked by their own … Many were imprisoned, and many were shot, and for some of the Soviet military advisers, simple contacts with the POUM fighters then turned into a verdict under Article 58 … 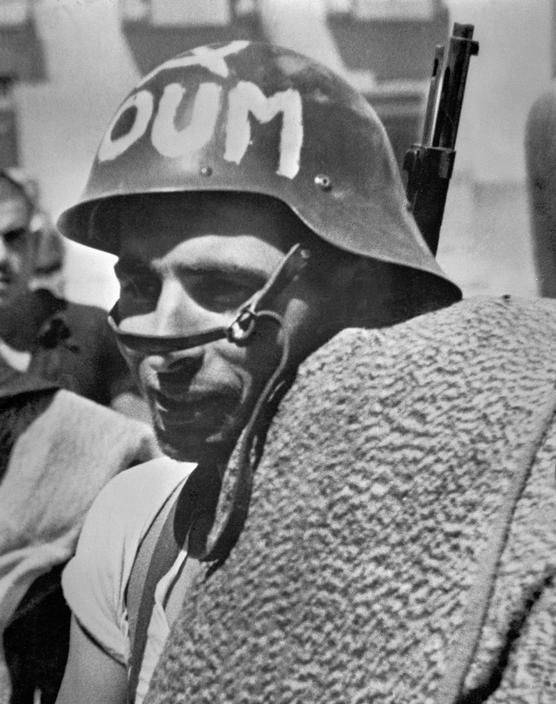 It was very easy to recognize the man in the helmet.

The workers’ militia created by the communists could be recognized by the blue bib overalls, which were worn by both men and women, and red caps with the abbreviation “People’s Union”. Another identification mark was a red bandage over the left elbow, which depicted a hammer and sickle with arms crossed for some reason. In addition to the red cap, the republicans’ headdress was also the red cloth caps worn by the Catalan militias, and, again, the Basque berets. And the Basques were for both the Republicans and the Nationalists, so on the Northern Front they met “on both sides of the barricades.”

Milisianos of Andalusia wore wide-brimmed peasant straw hats, bandoliers that crossed over their chests, and ordinary peasant clothes, which were very similar to the Mexican rebels of Pancho Villa. Everything is like in the movie “Viva, Villa!”, Which in the 30s of the twentieth century was as popular as “Chapaev”. 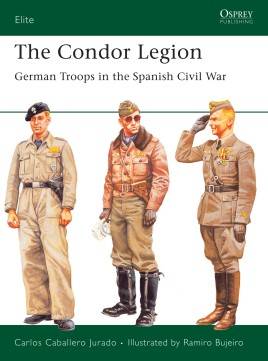 A fairly detailed story about the Condor Legion

Mussolini’s Italians and Hitler’s Germans also fought on Spanish soil. German pilots from the Condor Legion wore uniforms of the German model, but made of mustard beige Spanish fabric. Ranks differed by the stars above the pocket and on the caps – like the Spaniards, but edged with the Wehrmacht’s military colors. German non-commissioned officers also received gold braids in the Spanish manner. But the tankers’ black berets were “decorated” with the traditional German “dead head”, but together with a small swastika. 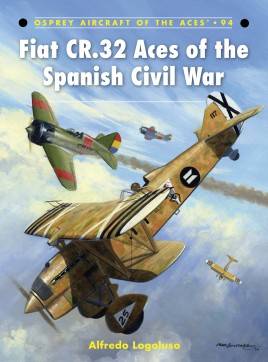 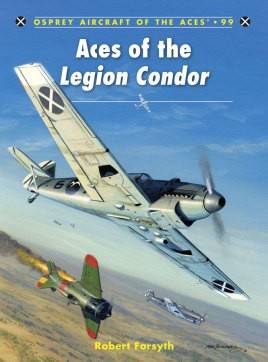 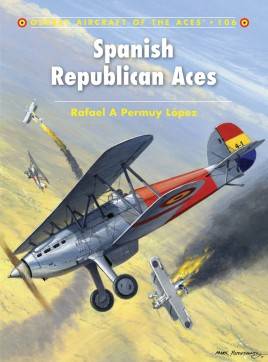 And the Republican aces

Italian soldiers and officers in Spain usually fought in their national uniforms, as the Duce did not make much of a secret of their nationality, but at the same time they often wore Spanish caps and helmets. The Bersagliers were recognizable by the tufts of rooster feathers. Above the left elbow of the Italian soldiers were usually sewn multi-colored shields with the emblems of the divisions: “Superorditi”, “Littorio”, “Flamme Nere” and others. The sleeve insignia and breast badges, as well as the insignia on the caps for the convenience of their identification by the Spaniards, again repeated the Spanish scheme, but on the other hand, curly buttonholes in the Italian style were sewn on their collars. 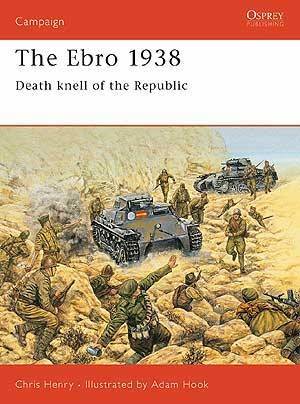 “Ebro River”. The last battle for the republic 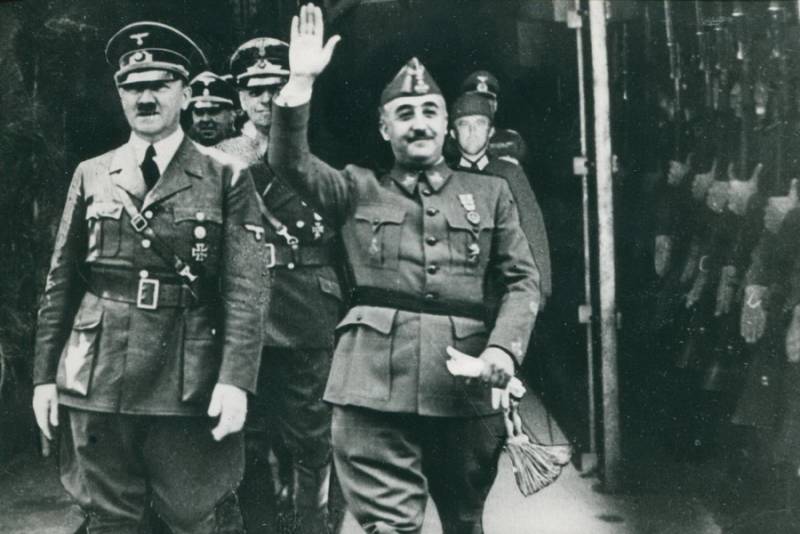 PS Before us is Franco, pleased with the victory. He gained power over Spain. Hitler also looks pleased: he made sure that in Spain he outplayed all his opponents, this gave him confidence. And then … then there was World War II!