“Yellow guy”, “the gun that conquered the Wild West” – how much romance there are in these well-known names, and, in fact, the same weapon – Oliver Winchester’s carbine, which became a further development of Tyler Henry’s rifle, to which only Nelson’s invention King and added …

Lubricate both Colts well
Winchester grease it well
And go on the road, because
Has taken a whim into your head.
Let’s go, okay, what’s there.
And there, even on horseback, even on foot –
I swear by the bloodthirsty coyote –
We will come to something.
(“The Man from Boulevard des Capucines”, Julius Kim)

Weapons and firms. I wonder how the colonel’s son, sitting on horseback, at a gallop managed to shoot Kamala two times in a row, but then did not shoot again? If it was a revolver, say, Trenter’s revolver, then … it is not clear what prevented him from firing three more times, and if it was a rifle, then it was necessary to be a virtuoso to reload it in such conditions. Therefore, most likely, the described case indicates that in his hands he had Jacob’s carbine – a double-barreled rifled primer rifle, which was a weapon of the British colonial troops in India, model 1856. It fired sharp-pointed Minier bullets or even explosive bullets containing a charge from explosive mercury or lead azide. The range of this rifle reached two thousand yards (1828 m), and most importantly, it had two barrels! 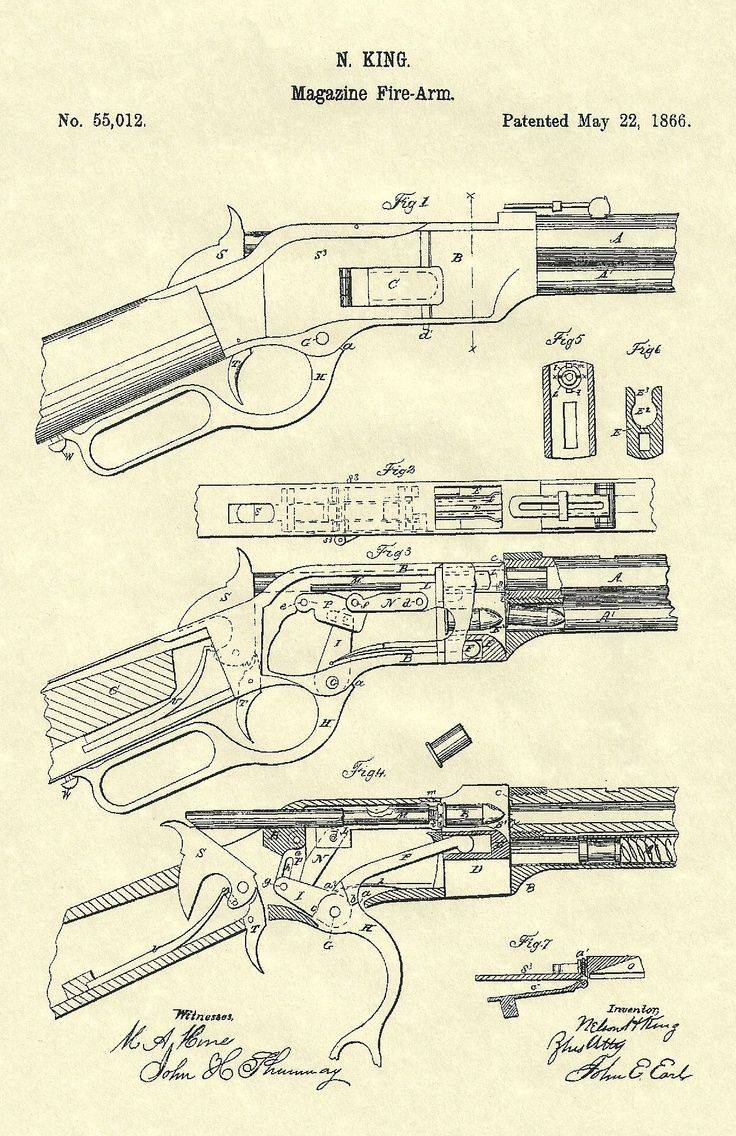 The more often the better!

That is, people already understood that the more charges in the weapon, the more chances the shooter has in a critical situation, if not from the first shot, but from the third, to hit the target.

Winchester 1866, but chambered for the centerfire .44-40 Winchester (44WCF). Photo by Alain Daubresse

Therefore, the success of the guns of Henry and Spencer in the United States was quite predictable. What was bad about them? The presence of a very complex loading system. So when Oliver Winchester put King’s “royal innovation” on Henry’s rifle, the market got exactly the weapon it needed. This is how the popular Winchester model of the 1866 rifle came about. The ad claimed that a skilled shooter could empty her magazine in 15 seconds. Thus, we can say that its rate of fire was about 60 rounds per minute.

Bayonet for this rifle. Photo by Alain Daubresse 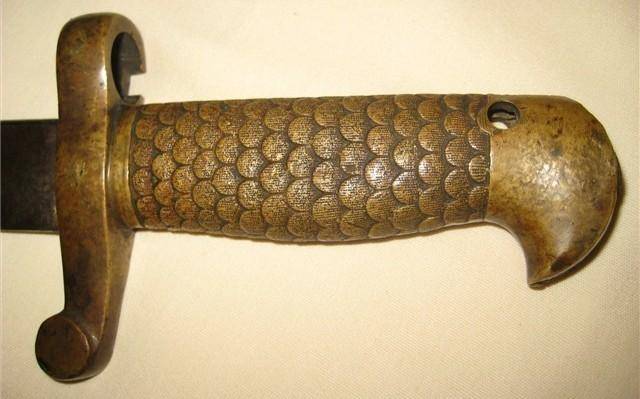 Several countries, including the Ottoman Empire and France, made official or unofficial purchases of the 1866 model, so this rifle had to fight. So, the Ottomans bought 45,000 muskets and 5,000 carbines in 1870 and 1871 and used them during the siege of Plevna (1877), as a result of which the Russian army suffered heavy losses, including through the use of Winchester rifles, which, by the way, became a great advertisement for them. They say, if with their help the Turks managed to stop the Russian infantry going into a bayonet attack, then this is really a very worthwhile weapon. By the way, one such captured Winchester carbine is on display at the Museum of the Don Cossacks in Novocherkassk, but for a number of reasons it was not possible to get a photo of it.

Window in the receiver for ejection of spent cartridges. Photo by Alain Daubresse

From the “musket” to the carbine 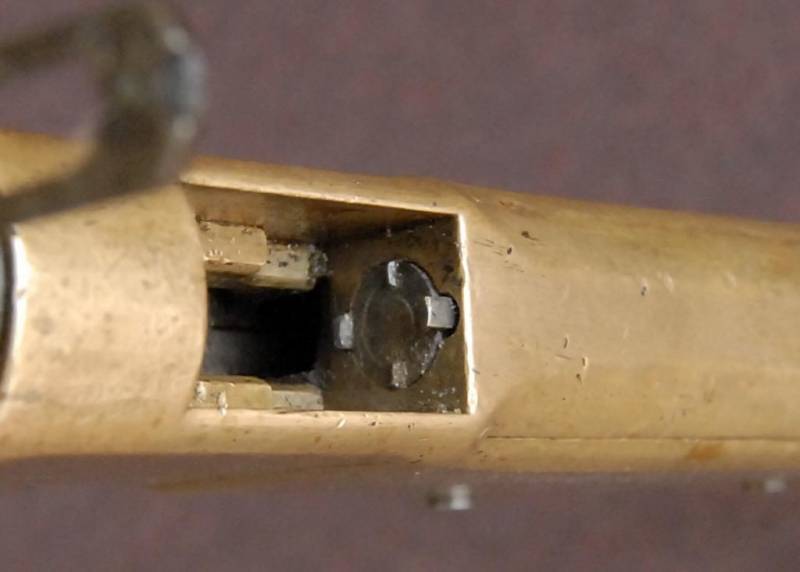 This photo clearly shows the “mirror” of the shutter – on it the “tooth” of the extractor and two strikers at once, which indicates that this shutter is used with rimfire cartridges. Photo by Alain Daubresse

I must say that Oliver Winchester did everything possible to get the maximum profit from this rifle. First, the receiver on it was made of brass (which is why it was called “yellow guy”), it was cast, and then brought to the desired size by hand. And at that time it was cheaper than producing the same thing from steel, only for this it was necessary to purchase machine tools.

Secondly, the design, designed for the same cartridge as Henry’s rifle, had the same breech open from above, but King’s “door” was placed on a removable “cheek” of the receiver, but to make it less wear out, they made it out of steel, and at the same time with the spring in one piece! 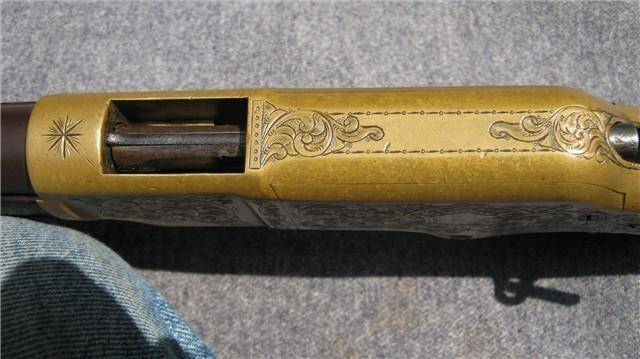 The extractor spring on the bolt and … the shadow of the ring, which the cavalry carbines had, are clearly visible. Photo by Alain Daubresse 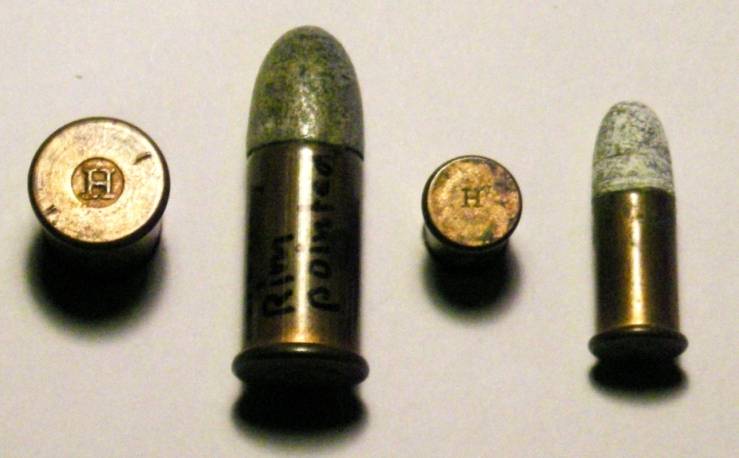 “Side fire” cartridges of .44 and .32 caliber. Photo by Alain Daubresse

Thus, the whole difference was in the loading system through the King’s “door” and … that’s it! The store could fit from 13 to 15 cartridges, which at that time was just an excellent indicator.

The market is dominated by the best!

So the new Winchester rifle simply could not displace all the other samples, and it did supplant them. In addition, it was durable, was not sensitive to pollution and had good accuracy at close range. By the way, it is because of this that the American army did not accept this rifle for service. Although the very high price also played a role, since the American army in the 19th century was sitting on a real starvation ration.

Winchester, going towards consumers, increased the power of the cartridge – the sleeve was lengthened, and the powder charge was increased to .44-20. And later, an even stronger .44 cartridge, mark .44-30 was released (a charge of 30 grains of gunpowder, and a bullet of 220 grains).

The main external difference of the new model, in addition to the material of the receiver, was the cover of the hole for the ejection of spent cartridges. Photo by Alain Daubresse

It is clear that Winchester’s commercial success has become a truly inspiring example for American gunsmiths. And everyone, who is not too lazy, began to copy its “lever shutter”. Moreover, if their creators did not use this system itself, then they made their rifle under the “Winchester” cartridge! This is how the guns of Frank-Wesson, Allen, Bollard, Remington, Howard, Robinson, Borges, as well as Forchand and Wideford appeared.

However, by the end of the 1860s, rimfire cartridges for rifles were practically out of use. Centerfire cartridges became widespread, and Winchester immediately launched the legendary “Winchester” M1873 under them – “the gun that conquered the Wild West.” Outwardly, the difference was that the brass receiver on it was replaced with a steel one. The new .44-40 (10.7 mm) cartridge, which was even longer and more powerful, was also a significant achievement, although it also did not impress the US Army Artillery Services, as they considered it too weak for military weapons. 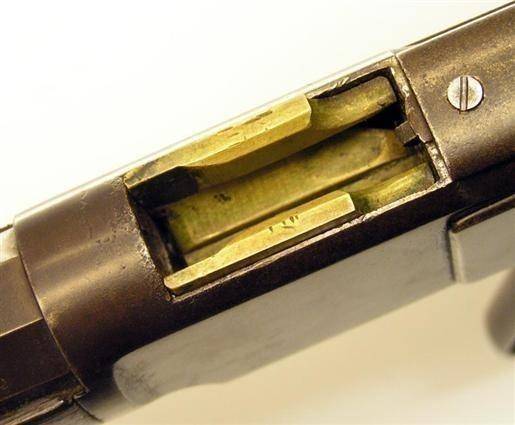 Side guides and cartridge feeder, raised to the level of its ramming by the bolt into the barrel. Photo by Alain Daubresse

Winchester released a new gun in four versions: the first was a military one, which was eventually rejected by the army, the M1873 “musket”. The store held 15 rounds, the length was 110 cm, weight 4300 g. The bayonet was either a standard three-edged or a blade bayonet-cleaver.

The second was the carbine, which was called the “carbine, model 1873”: it weighed less – 3,380 g, was shorter, which is why its magazine could hold only 11 rounds. In addition, a running ring was provided on the left of the receiver. The fore-end reached the middle of the barrel. 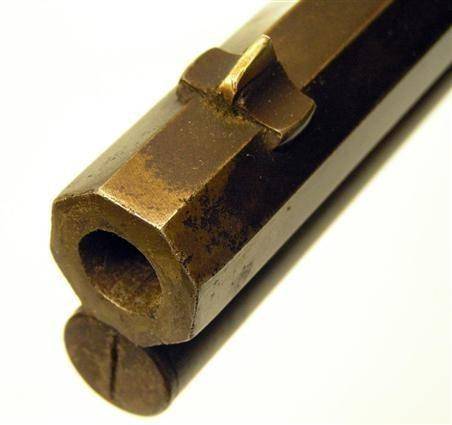 The octagonal barrel of the sporting carbine. Photo by Alain Daubresse

The fourth – also sports, target, had an octagonal barrel, a butt with a pistol grip and a modified shape of the lever, weight 4,175 g. Magazine capacity – 13 rounds.

The accuracy of the shooting was very good: when shooting at 260 steps, all the bullets of one magazine fit into a circle with a diameter of 203 mm.

As a result, Winchester was unable to convince the military that his weapon was “what you need.” But on the other hand, the civilian market, on the contrary, reacted very favorably to the new cartridge and to the new weapon, so in 1878 the Colt company even released a number of its “Peacemakers” under the .44-40 cartridge. This revolver was named “Frontier Six Shooter”. Well, as a hunting weapon and self-defense weapon, this Winchester model was bought very willingly, and was produced until 1919.

In general, Winchester felt the market very well and knew how to adapt to it. Noticing that enough of his own “lethal weapon” had already been sold, he released lightweight versions of his carbine for target shooting and as a “tribute to fashion”. They differed only in caliber: they used .38 and .32 cartridges, which together gave him, counting in calibers, a line of 12 models! It was very convenient for buyers and, accordingly, profitable for him, the manufacturer. 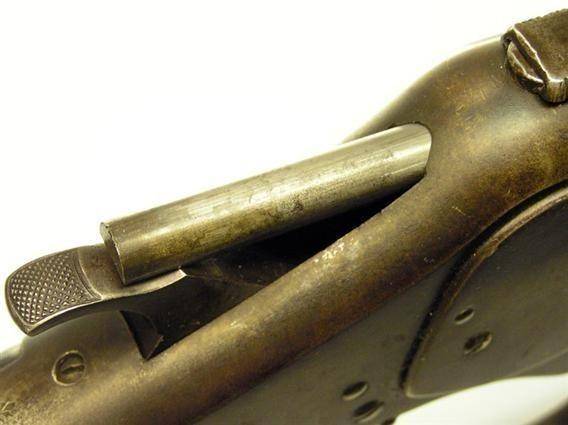 When moving back, the shutter also cocked the trigger, which was very convenient. Photo by Alain Daubresse

The secret of spent cartridges …

It is interesting that it was this gun of the 1873 model that caused the defeat of General Custer’s detachment and the death of all its people in 1876. Moreover, today we know for sure that the Indians had such weapons. The fact is that bullets and casings from 41 types of weapons were found at the site of the battle. Even 17 cases from Caster’s “Remington-Sporting” carbine were found. They carried out a ballistic examination, and it turned out that 600-700 Indians had firearms. Of these, 300-400 soldiers had magazine rifles “Henry” and “Winchester”, which by no means could be war trophies. Although some of the soldiers, apparently, had only bows and arrows. The law actually prohibited the sale of such weapons to the Indians, and the punishment for violating it was quite severe. But … who especially then obeyed the laws on the border with the Indian territory?

And the question immediately arose – where did the Indians have so much money to buy so many hard drives and cartridges for them, so that this became the reason for the defeat of a detachment of 266 soldiers, who were also quite well armed. True, in the 1991 film Son of the Morning Star, even such a trifle is shown as the fact that soldiers armed with single-shot Springfield carbines had to pick out the casings from their guns with knives, and this was really so. Such a defect has been noted. And this also affected the rate of fire, while the Indians (and excavations at the site of the battle have confirmed this) literally bombarded the white soldiers with bullets from their Winchesters. And, by the way, in the same film they even have Henry’s rifles in their hands! 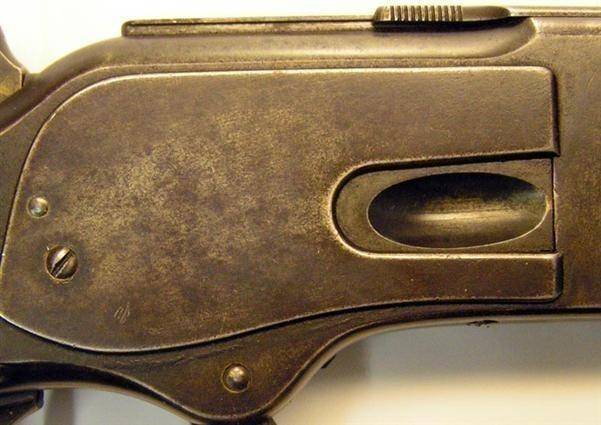 King’s “door” on the 1873 Winchester Photo by Alain Daubresse

By the way, the question “where” is still open. In the movie “They died at their posts” or “They died in boots” (1941 film), it is Caster who prohibits the sale of Winchesters to the Indians at the fort, although this was not really the case. Liselotta Welskopf Heinrich in his novel “Toki Ito” (Trilogy “Sons of the Big Dipper”) expresses his point of view on how this could have happened. My version of how the Dakota Indians got so many rapid-fire rifles is outlined in Men and Weapons. However, if for so many years no one has learned anything for sure about this, then it is quite clear that we will no longer see the truth about this. 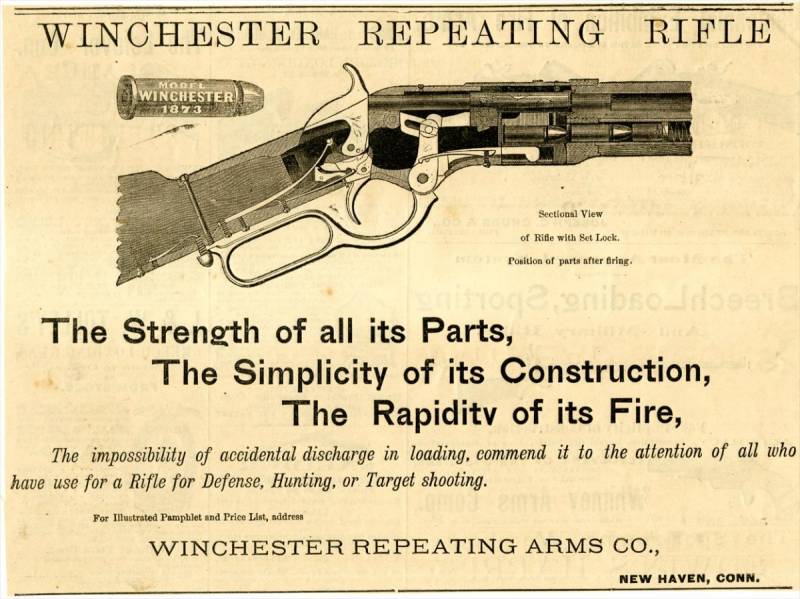 Oliver Winchester died in 1880. However, the arms company he created continued to exist and produced many more interesting weapons. But we will talk about them in our next article.