What kind of modern tank can you put together the most real ballad, moreover, impressive without any epic exaggeration? There can be only one answer here: by the totality of all its characteristics, such a machine should be the Soviet T-55 tank!

Low-chested, flat-bottomed,
Weighed down by itself
With a gun aimed at the soul,
A tank going into battle is terrible.
(“Vasily Turkin”. A.T. Tvardovsky)

Monument tanks. We have two places in Penza where a fairly large number of military equipment has gathered, displayed for all to see. One is behind the mayor’s office near the square with the monument to the soldiers-internationalists (“Afghan Gates”), the other is next to the monument to the military and labor valor of Penza residents during the Great Patriotic War, among the pine trees of the church-chapel of the Archangel Michael. Among the various cannons of the post-war years and self-propelled guns, the T-55 tank involuntarily attracts the eye (the T-54 stands at the “Afghan Gate”). Than? Yes, that’s just its appearance. He really is exactly like in Tvardovsky’s poem – and low-chested, and flat-bottomed, and his cannon, although it looks into the sky, but impresses with the thickness of the barrel. In short, it really is a tank! Tank with a capital letter! However, the fact that this is not just the impression of an accidentally thrown glance at him, but that this is exactly the way it really is, allows us to make sure his truly unique story. And here we will tell you today. Well, maybe not all at once …

So, it was in the USSR that an amazing tank was created during the Second World War, the name of which everyone knows – this is the T-34! And this is not just a tank – it is a tank-paradox. The gun on it was worse than that of the German “Panther”, the speed was lower than that of the British “Cromwell”, it did not shine with its armor thickness either, it had an outdated suspension and, moreover, did not have the maintainability of the “Sherman”. But … in terms of the aggregate of its combat properties and manufacturability, it surpassed all these tanks put together. Moreover, it turned out, although the military did not immediately realize it, that this is a tank of a completely new era – the era of total wars! No wonder he fought wherever he was, although he was already inferior to more modern machines. But not by much! Even better, although not so fundamentally, was its successor, the T-44, which nevertheless laid the foundation for the post-war Soviet school of tank design. Although, it would seem, what was it about him? The turret in the middle of the hull, massive wheels on torsion bars, the driver’s hatch on the hull roof and the engine not along, but across it. All this also migrated to the next tank, the T-54, but its turret was different – like a cap from a boletus, and a 100-caliber cannon, surpassing all the tank guns of our potential opponents in its power.

And then the Soviet Union had only two of them: the United States and Great Britain. Germany was just rebuilding its economy, and France was building only experimental tanks based on the German Panther. And then the Korean War began, where, again, our T-34s were operating, and it showed that the tanks of the Americans and the British were “not very good”, that they would not go far in vehicles of the Second World War under the new conditions! The M47 “Patton II” (1951) and M48 “Patton III” (1953) tanks are being urgently put into service, and in the United Kingdom, several modifications of the “Centurion” tank are being introduced. However, they did not surpass the T-54 either in terms of their firepower, or in terms of armor protection, or in terms of maneuverability. Their 90-mm and 83.8-mm rifled guns, if they had to shoot at a distance of more than 1000 m, the frontal armor of our tank was not pierced. In addition, gasoline engines were still installed on them, the main drawback of which had been known for a long time and very well – high fire hazard.

Therefore, there is nothing even surprising that soon (namely in 1953) a tank with an air-cooled diesel engine appeared in the United States – the M60 main battle tank. It already had a 105-mm M68 cannon (licensed version of the British L7A1), and the designers were able to bring the thickness of the frontal armor on it to 200 mm. Accordingly, another “Centurion” Mk.10 appeared in England with an L7A1 cannon with thickened armor, but the British had not yet been able to create a replacement for the gasoline engine at that time. 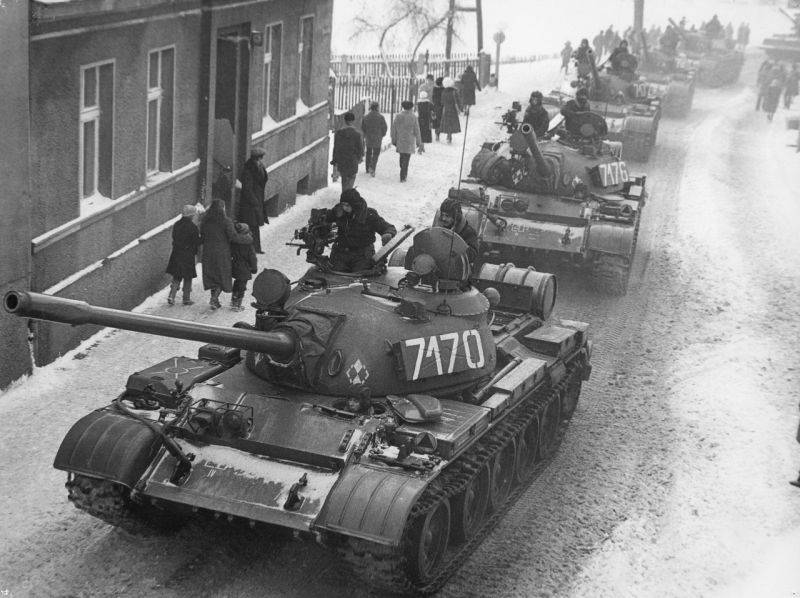 Our answer should have been the same. And … he did! Under the leadership of Leonid Kartsev, to improve the characteristics of the T-54, which had been serially produced here since 1945, the T-55 tank was developed at the Uralvagonzavod design bureau in Nizhny Tagil, which was put into service in 1958. armament (rifled gun 100 mm) and armor, the effectiveness of the gun was significantly increased due to the fact that it was stabilized, moreover, in two planes at once. That is, the T-55 received an almost 1.5-fold advantage over its opponents in firepower, since it could now conduct effective fire on the move. The vehicle’s mobility was also traditionally high.

However, perhaps the most important thing in which this machine surpassed all its Western opponents was its high operational characteristics, that is, indicators of reliability and maintainability.

In particular, the T-55 had a diesel engine with a liquid cooling system, which made it possible to operate this machine in various regions of the planet. And finally, let’s look at the most important indicator of its high performance. So, according to the JANE’S Defense Equipment yearbook for June 1999, various modifications of the T-55 were in service in the armies of more than 60 countries of the world, and the total number of vehicles produced (including tanks issued under license and the Chinese modification – the T-59 tank ) was a record – about 100 thousand cars! This is indeed a record figure, because throughout the entire history of world tank building, there are simply no other examples when a tank of the same type was produced in such quantities! 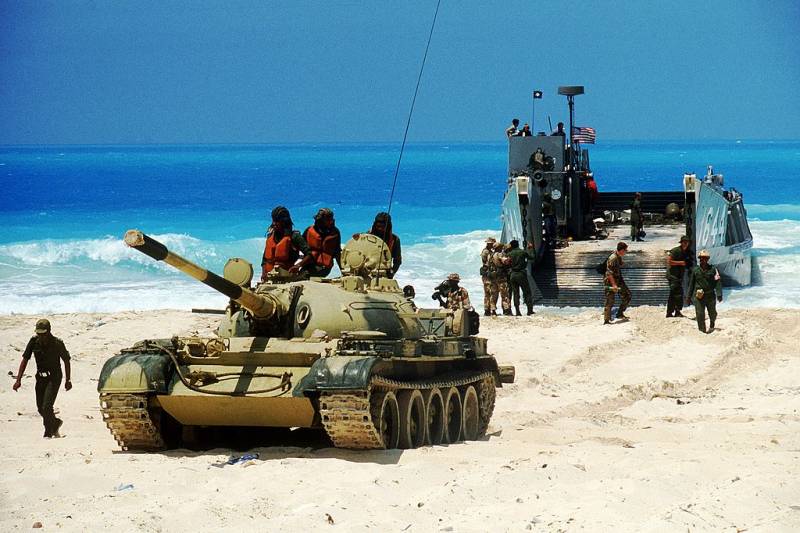 It is interesting that our new tank looked very similar to the T-54, which is why they were often confused in the West, but at the same time it was much more dangerous!

The diesel engine has become more powerful – not 520, but 580 hp. with., which is not superfluous for any tank. The stock of transported fuel began to be transported in storage tanks. At first glance, such placement of fuel does not increase the survivability of the vehicle, rather the opposite. But tests at the proving ground showed that the diesel fuel tanks located on the fenders not only do not increase its fire hazard, but also serve as additional protection in the event of a cumulative projectile hit. In this case, the fuel simply flows out of the punctured tanks, but they themselves do not burn. If they were, of course, fueled with gasoline, then a cumulative projectile would certainly set them on fire, but only heavy diesel fuel does not have such flammability. Due to the dense layout, the total capacity of the reserved fuel tanks also increased to 680 liters, which now accounted for 50% of the total stock of transported fuel.

The T-55 did not seem to differ much from the T-54B (on which the gun was also stabilized in two planes) in terms of armament, only the anti-aircraft machine gun was removed from it. First it was removed, but then in 1970 it was installed again. The number of rounds in ammunition for the 100-mm rifled tank gun D-10T2S was increased from 34 to 43 shots. The shells for the gun had good armor penetration characteristics. So, a cumulative projectile pierced an armor plate with a thickness of 390 mm (installed vertically), and a sub-caliber feathered at a distance of 1000 m – a sheet with a thickness of 275 mm, that is, they hit all the main NATO tanks. 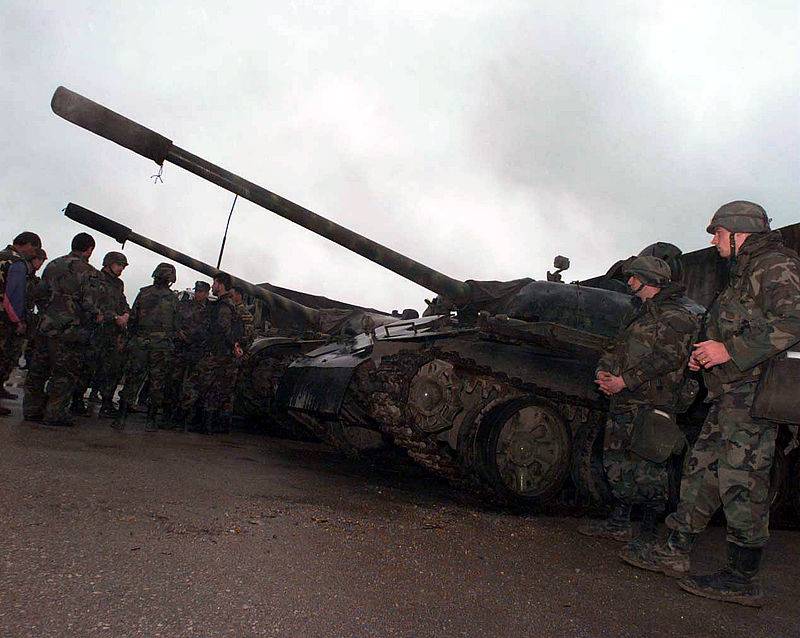 The installation of an air compressor, with the help of which it became possible to start the engine with compressed air, made it possible to save battery power and even start the engine in their absence. The crew also received collective protection against nuclear, chemical and bacteriological weapons: a filter ventilation unit that purified the air supplied to the tank to its crew. The automatic fire extinguishing system also increased its survivability in the event of a hit. Well, the thermal smoke equipment installed on the tank, operating by injecting diesel fuel into the exhaust manifold, made it possible to repeatedly install a smoke screen, which could not have been achieved with disposable smoke bombs, which, moreover, quickly ended.

The next response of our tank designers to the further improvement of the tanks of our potential opponents was the T-55A model, which appeared already in 1961. This tank improved its protection, and for the 100-mm tank gun, armor-piercing shells were created with significantly higher armor penetration.