The second half of the 19th century was a kind of rehearsal for the arms race, which culminated in the First World War. During this period, military engineers developed more and more advanced and powerful weapons, including for the fleet. At the end of the 19th century, several projects of ships were created in Great Britain and Italy, the main emphasis in which was placed precisely on the caliber of the artillery used.

The distribution of large-caliber artillery in the fleet was significantly influenced by the civil war in the United States, during which the parties to the conflict massively used artillery, including quite destructive and monstrous samples. Such tools included, for example, Rodman’s Columbiade. Manufactured in 1863, the gun had a caliber of 381 mm and a weight of 22.6 tons. Also in the US Civil War, 13-inch (330 mm) mortars “Dictator” were noted, which were even installed on railway platforms.

The Franco-Prussian War of 1879-1871 also contributed. The experience of the American Civil War was used this time in the Old World. During the siege of Paris, the Prussian army also used railway platforms to place guns of special power and shell the city from different directions.

The next logical step was the deployment of large caliber artillery on ships. In this regard, the British battleship of 1876 Temeraire can be distinguished. The ship was equipped with four rifled muzzle-loading 25-ton RML 11 inch 25 ton Mark II guns. These 280-mm guns in the XX century could hardly surprise anyone, but at that time they looked very impressive on a warship. 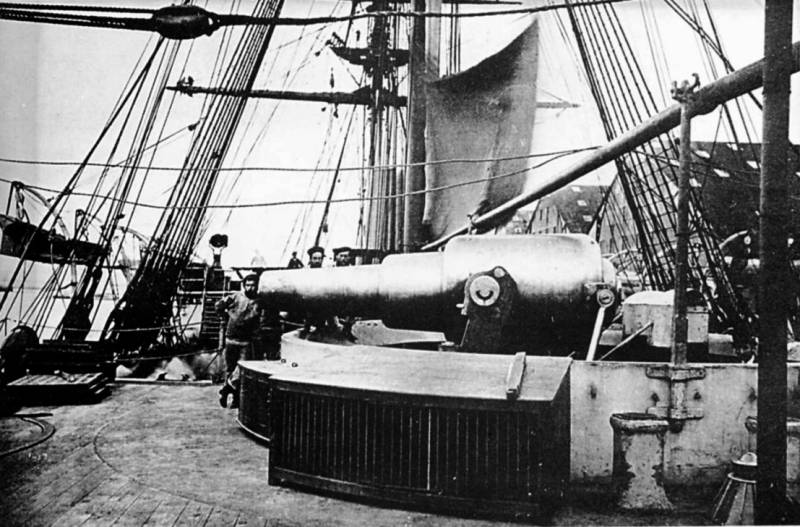 It is all the more surprising that just a few years later, even larger caliber guns appeared on the battleships of Great Britain and Italy, surpassing in this indicator the main caliber of most future battleships of both world wars.

The battleship with the familiar to everyone who read in childhood the novel by Robert Stevenson “Treasure Island”, called Admiral “Benbow”, received two destructive weapons as the main weapon. It was the last of six Royal Navy Admiral-class barbet battleships built. It differed from the five ships of its predecessors by the presence of two huge 110-ton 413-mm guns, which were its main caliber.

The ship HMS Benbow was completely identical to the battleships HMS Camperdown and HMS Anson, differing from their sisterships only in armament. Instead of four 343-mm guns, the designers placed two 413-mm guns on it – one each at the bow and stern of the vessel. It is believed that the changes in the configuration and composition of the main caliber guns of the battleship were associated with the emerging shortage of 343 mm guns. This version looks a little odd considering that the 413mm guns themselves were a much more scarce item.

According to another version, at Admiral Benbow, the British fleet wanted to work out a new concept of warships, as well as the use of super-powerful artillery. The so-called “idea of ​​a knockout blow” on an enemy ship from a super-powerful weapon. The idea was to defeat the enemy ship and disable it with just one hit. Also, this ship seemed to be a logical response to Italian experiments with large-caliber naval artillery. 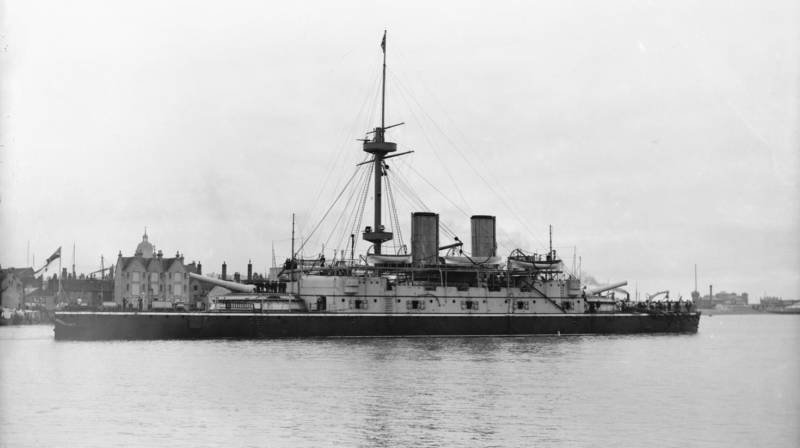 Battleship Admiral Benbow in one of the ports on the Mediterranean

This theory did not justify itself in any way, but at the end of the 19th century it still had many supporters. In reality, the choice in favor of two 413-mm guns, located in single barbette installations, instead of four 343-mm guns, influenced the combat value of the battleship only in a negative way.

The British developed 413-mm guns on the basis of the 432-mm guns previously ordered by the Italians, which were intended for the battleship Andrea Doria. The guns were created by engineers at Armstrong Whitworth. In total, 12 unique guns were produced, which received the designation 413-mm / 30 BL Mk I. Almost each of the guns was manufactured according to separate drawings, for this reason, many elements of the guns were not unified. All of them had one or another design difference from each other, while the main characteristics of the guns were almost the same.

To avoid confusion, each gun had its own number from 1 to 12. The first two assembled guns were placed on the battleship Benbow. They were installed in barbets measuring 18.29 by 13.72 meters. In addition, there was a variant of placing these guns in a two-gun turret mount. The barbets on the battleship Benbow were pear-shaped fortified structures, each of which was equipped with only one weapon.

The guns themselves were placed on a rotating platform and were equipped with a hydraulic drive. The hydraulic drive was responsible for pointing the guns in a vertical plane. Horizontal aiming at the target was provided by turning the platform. In theory, the rate of fire of monstrous guns was 0.29-0.33 rounds per minute, but in practice this figure did not exceed one shot every 4-5 minutes. 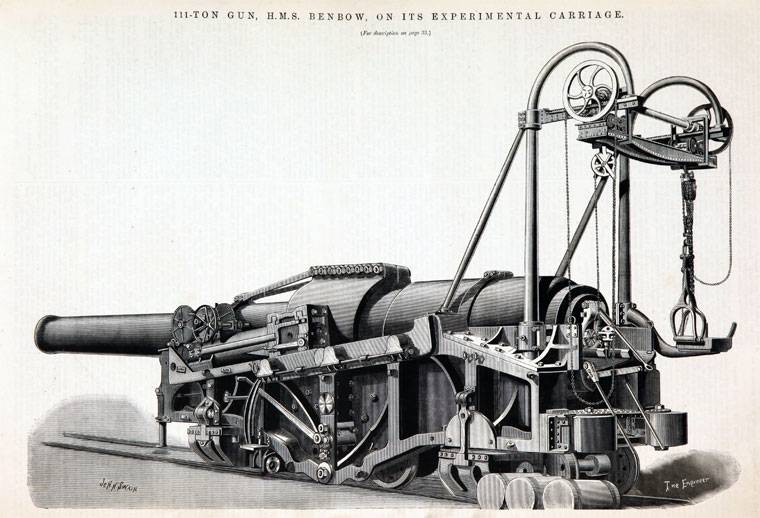 The barrels of 413-mm guns were designed for 104 rounds, however, in practice, their geometry began to be violated after the implementation of literally several volleys. The maximum firing range of the guns was 11,340 meters with an initial projectile speed of 636 m / s. The arsenal of guns included not only armor-piercing and high-explosive shells, but also shrapnel. For example, Palliser’s armor-piercing shells featured a body made of red-hot cast iron weighing 816.46 kg. Such ammunition was supplied with an explosive charge weighing 13.38 kg, which was detonated by a bottom fuse.

The 413 mm / 30 BL Mk I guns, which also went down in history under the designation Elswick 110 ton gun (after the name of the Elswick Ship Building Yard), are rightfully considered one of the largest-caliber and powerful guns in the history of not only the Royal Navy, but also all the world’s artillery. Despite the impressive caliber, the guns were extremely limited in capabilities and potential due to their too large mass and low structural reliability.

The disadvantages of the guns were also attributed to the high complexity of maintenance and low rate of fire. Although at a distance of 910 meters, the shells fired from these guns could penetrate 810 mm of armor, the armor penetration of the guns was absolutely unclaimed at that time. For this reason, they were significantly inferior to the simpler and faster-firing 305-mm and 343-mm guns, the firing range of which grew continuously.

Even before the appearance of the British battleship Admiral Benbow, which was commissioned in 1888, the Italian navy received a ship with much more monstrous weapons. Only the famous battleship “Yamato” could compete with it in caliber. We are talking about the battleship Caio Duilio, which was launched on May 8, 1876. 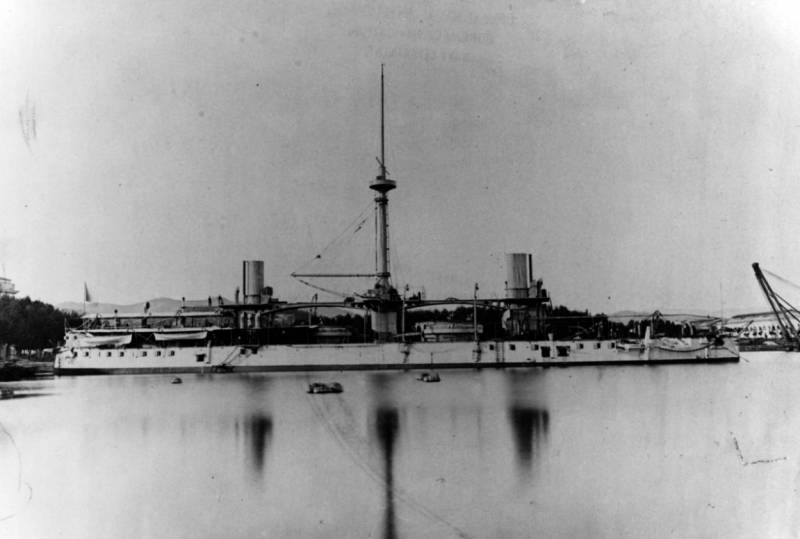 The battleship, which became the lead in a series of two ships, was built for the Italian naval forces according to the design of the engineer Benedetto Brin. The ship got its name in honor of the famous Roman naval commander Gaius Duilius, who was credited with the first naval victory in the history of the Roman fleet. Within the framework of this project, the Italians tried to implement their doctrine of “individual superiority”, which they continued to implement in their other projects.

The concept was to build ships that were guaranteed to be stronger than the enemy. For Italy, which did not have great industrial and financial potential and was unable to compete with Great Britain at sea, this approach with a focus on quality rather than number of ships seemed justified.

The Italian admirals counted on achieving “individual superiority” at the expense of the most powerful guns. The battleship Caio Duilio was armed with four 450-mm RML 17.72 inch gun guns, located in pairs in two turrets. Weighing almost 100 tons, the guns were the most powerful muzzle-loading rifled guns in history.

Eight guns ordered in Britain for two ships of the Caio Duilio project cost the Italians a very decent amount at that time – 4.5 million lire, which was comparable to the cost of a fully equipped and equipped battleship of the previous series. 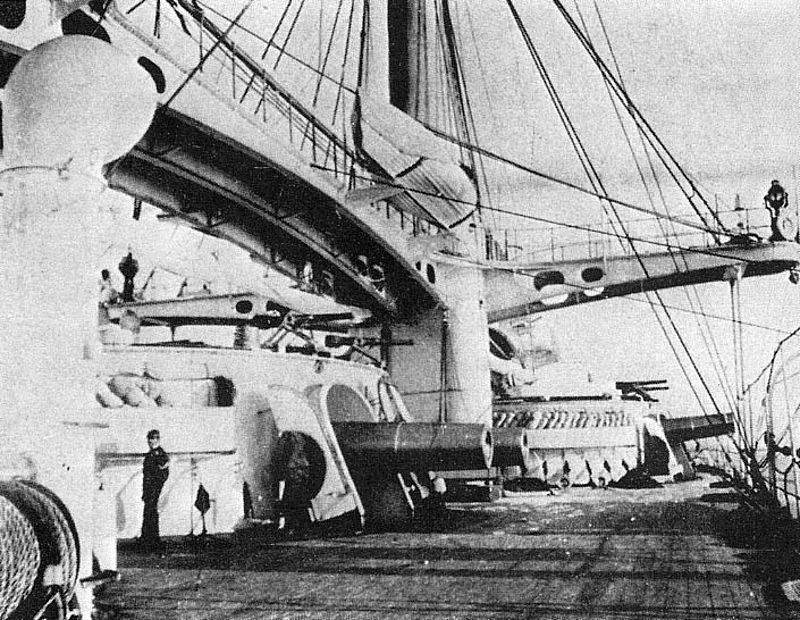 Tower of the battleship Caio Duilio with 450 mm guns

In the arsenal of these guns were armor-piercing, high-explosive fragmentation shells and shrapnel. At the same time, the rate of fire of the guns was not at all impressive. The maximum rate of fire did not exceed one shot every six minutes, and this is in the presence of a calculation of 35 people. This significantly limited the combat capabilities of the ship.

In this case, the initial velocity of a projectile weighing approximately 910 kg was 472 m / s. The guns were distinguished by a small maximum firing range – no more than 6,000 meters. Although at this distance, an armor-piercing 450 mm projectile could still penetrate up to 394 mm of armor. At a distance of 1800 meters, armor penetration was 500 mm. With a caliber of 450 mm, the length of the gun was only 9953 mm, which did not have the best effect on the firing range.

The battleship Caio Duilio surprisingly combined a number of completely innovative ideas (a complete rejection of sailing weapons, the presence of a dock-hangar for a minion boat in the stern, a strong armor belt), which together gave not a positive, but a negative result. The designers of the battleship, in an effort to bring the concept of a battleship to perfection, brought it to the point of absurdity.

The monster guns were housed in progressive enclosed main-caliber turrets, but they were loaded from the muzzle on the outside of the turret and had a monstrously low rate of fire. For this reason, the impressive 910 kg shells in battle would have little chance of hitting the enemy. In turn, enemy ships with rapid-fire artillery would quickly turn the Italian battleship into a colander. 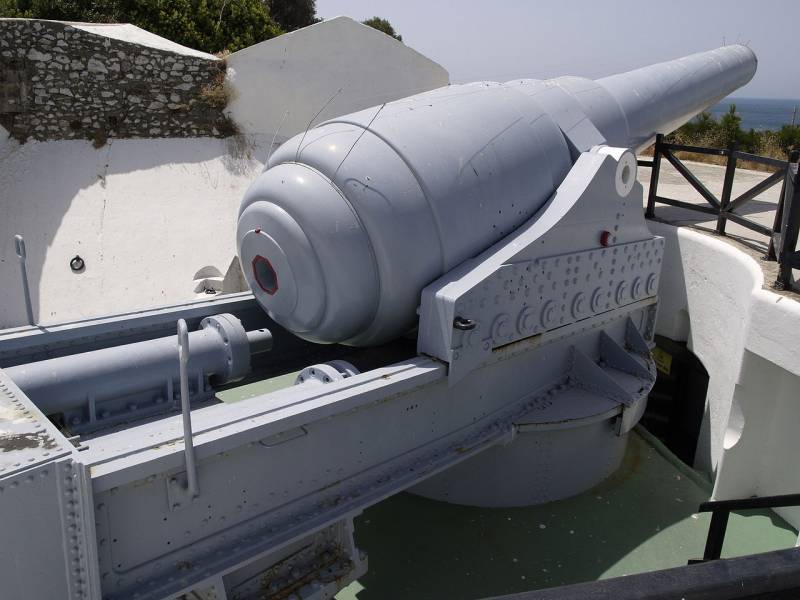 By the way, the 550-mm armor of the ship, almost invulnerable to artillery, was placed in a rather narrow strip along the waterline for 52 meters, that is, it covered half of the length of the ship. Neither this armor nor the division of the ship’s hull into 83 watertight compartments would have saved from shelling with more advanced rapid-fire guns, even when meeting a cruiser.

True, at least some plus in such an unusual choice of weapons by the Italians could be found if desired. The British were shocked by the Italian order and the new battleships and began to spend money on such artillery themselves. In particular, they built similar guns and placed them in coastal batteries to protect Malta and Gibraltar.