The Bundeswehr is rightly considered one of the largest armies in Europe. The total number of military personnel in Germany, as of June 2020, was estimated at 185 thousand people. The size of the armed forces is of great importance when the army decides to switch to new models of small arms. It is on such a step that the German military is currently going, who have chosen a new main machine gun for their armed forces. The upcoming rearmament is significant, since for the first time in decades, the main supplier of automatic weapons for the Bundeswehr will not be Heckler & Koch, but Haenel from the small town of Suhl in Thuringia. For connoisseurs of the arms world, this company is known primarily for its cooperation with the famous German designer of firearms Hugo Schmeisser.

According to German media, the tender for the supply of new machines for the Bundeswehr was won by CG Haenel. It should be noted that this is the first time the company has won such a large government contract. We have not followed the financial performance of Haenel from the small town of Suhl, but now we can safely say that the financial position of this company will be healthy in the near future. It is already known that the company will supply the German armed forces with 120 thousand Haenel MK-556 assault rifles and accessories. The total value of the deal is estimated at 245 million euros. The fact that it was the Haenel company that won the tender for the supply of 120 thousand machine guns, the Ministry of Defense of the Federal Republic of Germany announced on September 15.

It is worth noting that the Bundeswehr announced a competition for a new assault rifle in the spring of 2017. In the same year, the Haenel MK-556 assault rifle (MK is short for Maschinenkarabiner) was first shown to the general public. As you might guess from the name, the new machine gun was created for the main NATO ammunition 5.56×45 mm. The tender itself has been held in recent years, the process of testing and refining weapons has continued over the past three years.

At the same time, CG Haenel has already officially commented on the decision of the German Ministry of Defense of September 15, 2020 on the choice of the MK-556 assault rifle. The company emphasizes that hard work over the past years has allowed the Haenel model to defeat well-known German and international competitors who took part in the tender for the supply of a new assault rifle for the German armed forces. The company notes that the MK-556 assault rifle best meets the requirements of the Bundeswehr Procurement Office. This model won in field trials, overall efficiency and economic considerations. Haenel emphasizes the fact that the new MK-556 assault rifle is 90 percent made in Germany in the economic region of South Thuringia. 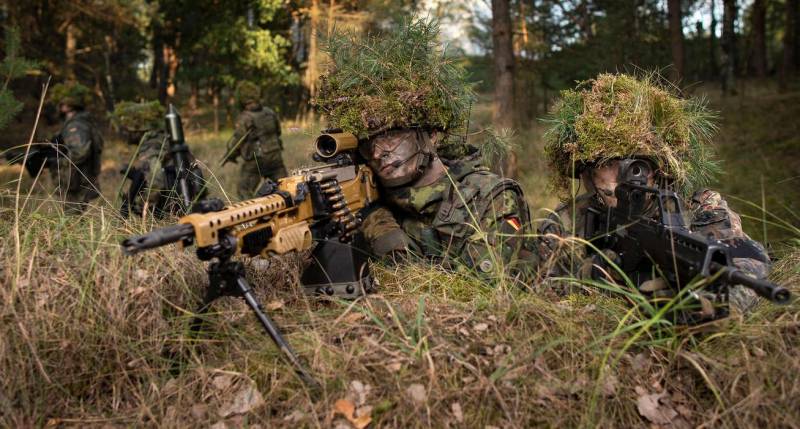 German soldiers. The one on the right is armed with a G36 assault rifle, photo: www.bundeswehr.de

According to media reports, the Haenel assault rifle was “slightly better” and cheaper than the upgraded versions of the G36 assault rifle from Heckler & Koch. The latter has been in service with the Bundeswehr since the mid-1990s. Specifically, with this model of automatic weapons in the German army, relations did not work out. A wave of criticism of the assault rifle rose in 2012, when publications began to appear in the media that the G36 in high ambient temperatures and during intense combat has a drop in accuracy. These publications were based on the experience of German soldiers who served in Afghanistan as part of the NATO mission. Heckler & Koch rejected claims to the weapon, but in 2015 the Bundeswehr still decided to change the main machine gun.

Haenel won the battle of David and Goliath

The contract for the supply of 120 thousand MK-556 assault rifles for modern European realities looks very large. Experts knowingly compare the story unfolding before our eyes with the biblical story in which David defeated Goliath. The comparison suggests itself, given that over the past decades, the main supplier of automatic weapons for the Bundeswehr has been Heckler & Koch from Baden-Württemberg. Heckler & Koch is currently not only legendary, but also a very successful company. Products under the HK brand are widely represented in all countries of the world, while the company has its own branches and divisions in the USA, Great Britain and France. The company from Baden-Württemberg has been supplying automatic weapons to the Bundeswehr since 1959. Against this background, the victory of a small, little-known company Haenel in a very large competition looks even more interesting.

In fact, for a long time, CG Haenel’s main asset has been its past. The company’s revenue is at least 30 times lower than that of Heckler & Koch. At the same time, Haenel is a company with a richer history. If Heckler & Koch was founded in the early post-war years, in 1949, then the Haenel company traces its history back to the middle of the 19th century. The date of foundation of the Haenel company, which at first specialized in the production of not only small arms, but also bicycles, is considered to be 1840.

The specialists of this company from South Thuringia have been working on the creation of firearms for 180 years, having accumulated a wealth of experience during this time. Today, the company produces both civilian weapons and works with government customers in the person of law enforcement agencies. In addition to automatic weapons, the company produces hunting rifles and sniper rifles. At the same time, it was the models of automatic weapons that brought the greatest fame to the company. Haenel has gone down in history forever as the company that created and produced the Sturmgewehr 44 assault rifle (known as the StG 44 and MP44) during the Second World War. The creator of this well-proven weapon on the battlefield was the famous German gunsmith designer Hugo Schmeisser. 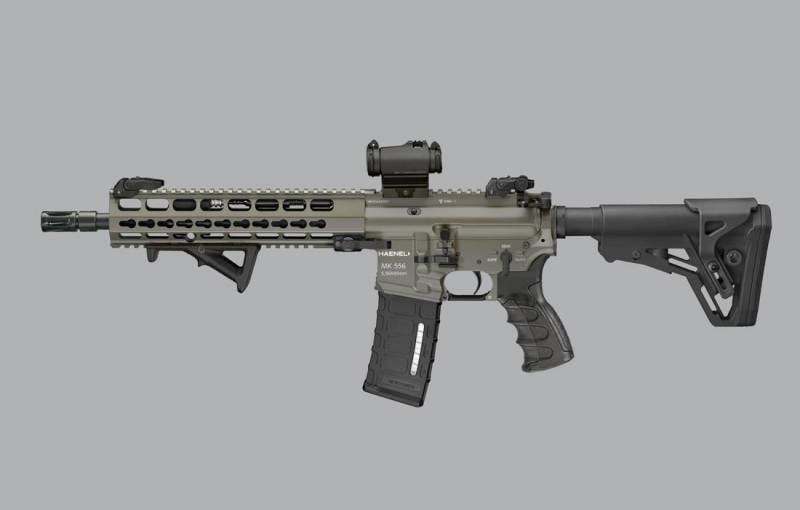 True, this was the last truly high-profile success of the Haenel company. After the war, most of the company’s equipment was exported to the USSR, where designer Hugo Schmeisser, who worked in Izhevsk until 1952, also went. As you might guess, the enterprise ended up on the territory of the GDR and for a long time was engaged in the production of only pneumatic and hunting weapons.

The second life for the company began already in the 21st century, when it was recreated under its historical name in 2008. CG Haenel is currently part of the Merkel group of companies, which has been owned by Caracal LLC from the United Arab Emirates since 2007. It was the significant Arab investment that got Haenel back on its feet, effectively restarting its production. Russian experts have already expressed the opinion that it was their Arab owners who were ready to dump and reduce the price of the machine in order to enter the German market, to win the tender for the supply of new machines to the Bundeswehr company Haenel. Good modern relations between Germany and the UAE are also noted. So the deal may also have some geopolitical context. The fact that the Bundeswehr will to some extent depend on a state-owned company from the Persian Gulf is called, if not a sensation, then a truly unprecedented event in Germany.

With the arrival of the Arab capital, CG Haenel again launched a full-fledged production of sports, hunting and army small arms. Before the success with the new MK-556 assault rifle, the company had already managed to conclude several contracts with the power structures of the Federal Republic of Germany and the Bundeswehr. In particular, Haenel limitedly supplied police units with a semi-automatic CR 223 rifle, and for the army a Haenel G29 sniper rifle chambered for a fairly powerful .338 Lapua Magnum cartridge (8.6×70 mm). The G29 sniper rifle was put into service back in 2016. These were not bulk shipments. The staff of the company in Suhl is very small: according to the official website of the company, it has only 120 employees. In this regard, the German newspaper Deutsche Welle believes that to fulfill the contract for the supply of 120 thousand machines to the Bundeswehr, the help of the parent holding from the UAE and its production facilities may be needed.

The new Haenel MK-556 assault rifle is based on the well-known ergonomic and well-proven AR-15 architecture, which is unmistakably guessed in the external appearance of the weapon. This model uses a short-stroke gas-operated automatic system and an adjustable gas chamber. A distinctive feature of the model is that it is initially available with a different set of barrels: 16, 14.5, 12.5 and 10.5 inches. The semi-automatic model Haenel CR 223 was built on the same base AR-15, which was already used to a limited extent by the German police. In this regard, the MK-556 is a fully automatic and updated version of the CR-223. 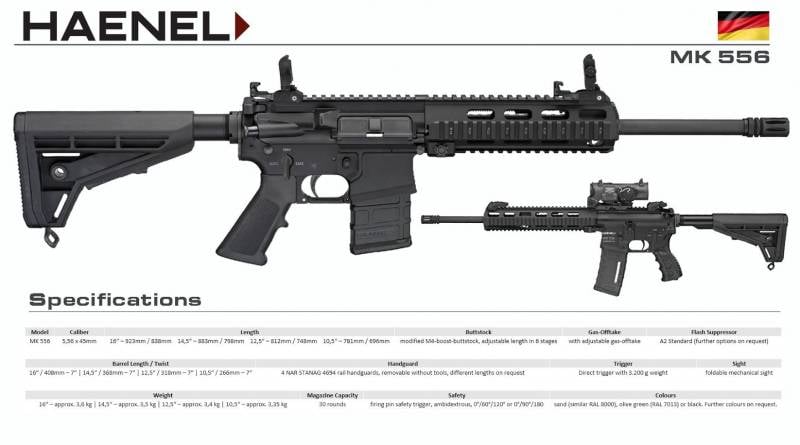 Depending on the length of the barrel, the maximum length of the machine gun, as well as the weight of the weapon, will change. For example, a model with a 16-inch barrel (408 mm) will have a maximum length of 923 mm, and the weight of an assault rifle without cartridges will be 3.6 kg. At the same time, an assault rifle with a barrel length of 10.5 inches (226 mm) will be noticeably more compact. Its maximum length is 781 mm and its weight is 3.35 kg. All MK-556 models will be equipped with 30-round box magazines. If necessary, other stores of the NATO STANAG standard, including drum ones, can be used.

Like all models of modern small arms, the new German machine gun is friendly with Picatinny rails and allows the installation of a variety of sights. Also MK-556 is equipped with a telescopic 6-position stock, which can be easily adjusted in length. In general, this is a standard unremarkable model of automatic small arms chambered for a 5.56 mm cartridge, built on the basis of the AR-15. A sufficient number of such models are presented in the world today. A solid weapon that does not claim any innovative laurels and breakthrough solutions.