Speaking about the conflict between Armenia and Azerbaijan, we will not now consider who is right in it and who is to blame. Each side will have their own arguments and objections. We are interested in the purely military aspect of the Armenia / Nagorno-Karabakh-Azerbaijan / Turkey confrontation.

One of the key factors allowing a weaker adversary to count on victory is the moral resilience of the armed forces, population and leadership of the country. The most striking example of such resilience can be considered Vietnam, on which the United States dropped 2.5 times more bombs than on Germany during World War II. 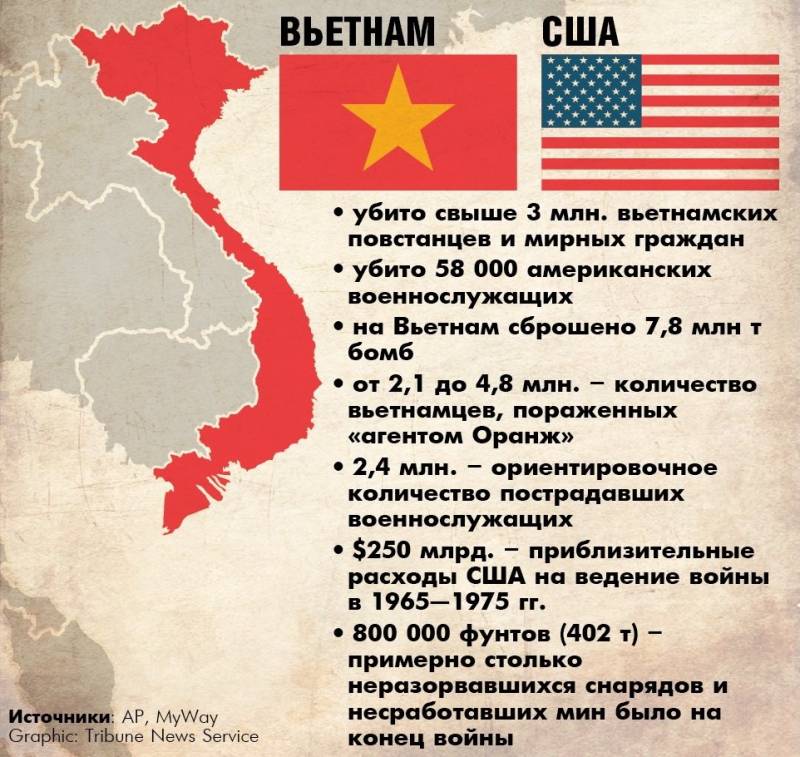 Nevertheless, the most important factor of victory is the weapons and weapons used by the opponents: victory cannot be achieved by fighting spirit alone. The military budget of most countries of the world is rather severely limited, and the smaller the state and its economic capabilities, the more responsibly it is necessary to approach the development of the armed forces, especially in conditions when there is a direct and obvious threat of war.

Both countries, Armenia and Azerbaijan, understand the risk of a military conflict over the disputed territories, which is why the armed forces of both countries receive increased attention: their defense spending as a percentage of GDP is comparable. 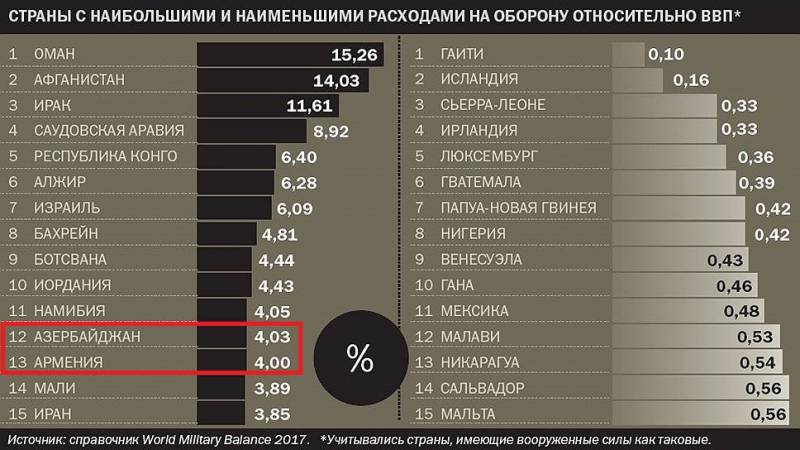 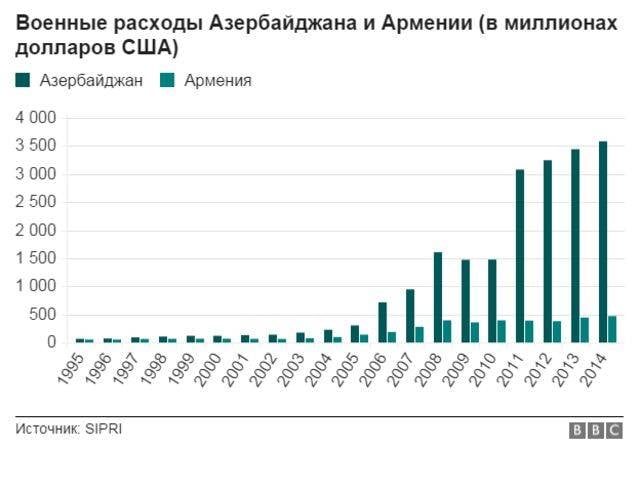 And the military capabilities of Armenia and Azerbaijan are becoming completely incomparable in the context of possible direct participation in the military conflict of Turkey. Even if it does not come to a direct military invasion of Armenia by Turkey, the supply of intelligence data, weapons, military equipment and ammunition to Azerbaijan is most likely going on actively now, given the aggressive and provocative position of Turkish President Recep Erdogan in this conflict and openly made by him statements of full and unconditional support for Azerbaijan. 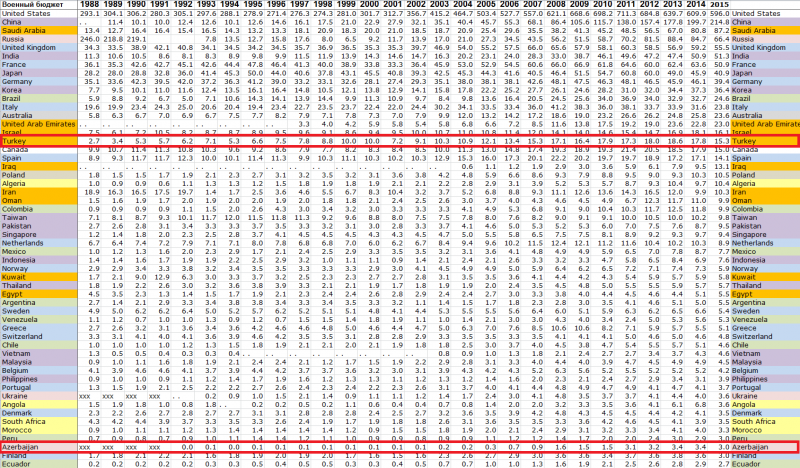 Turkey will not be able to throw all its forces on Armenia, given its involvement in the conflicts in Syria and Libya, the potential for a conflict with Greece and punitive operations against the Kurds in Iraq, but the remaining resources of the Turkish armed forces will pose a significant threat to Armenia.

All of the above requires Armenia to spend the military budget as efficiently and productively as possible. The question is, is this really so? And the second question, which is essentially the first: what kind of weapons does Armenia need to successfully confront Azerbaijan and Turkey?

Armenia has no fleet. And where does it come from if Armenia has no outlet to the sea? Nevertheless, it would not hurt to have some of its equivalent in Armenia.

First of all, we are talking about intelligence vessels disguised as civilian vessels, possibly acquired or leased, and operating under the flags of other countries. These vessels, stationed in the Caspian and Black Seas, can perform the function of monitoring the actions of the naval forces (Navy) of Azerbaijan and Turkey, and conduct radio reconnaissance.

Of course, in the Caspian Sea this is possible only with the open or, rather, the tacit consent of one or several countries that have access to the Caspian Sea: Russia, Kazakhstan, Turkmenistan or Iran. In the Black Sea, opportunities are wider, in addition to the countries of the Black Sea basin, Armenia can cooperate on this issue with natural Turkish antagonists, for example, with Greece.

Of course, the task of conducting reconnaissance at sea is not a priority for Armenia, but it becomes much more urgent in the context of the second possibility – the creation of reconnaissance and sabotage units of combat swimmers.

In the Caspian, Azerbaijan has a navy, including missile boats, patrol ships and boats, minesweepers and landing ships, and even midget submarines. Azerbaijan needs the fleet to defend its national interests in the exploration and production of oil and gas located on the shelf of the Caspian Sea.

Ships of the Azerbaijani Navy

It is difficult to say how well the security of the Azerbaijani Navy ships stationed in the base, as well as gas and oil production facilities, is well established, but this potentially gives Armenia the opportunity to carry out sabotage measures against these facilities. In addition, reconnaissance and sabotage units operating from the Caspian Sea can gain access to a much larger number of objects than is possible from the territory of Armenia, the border with which Azerbaijan is likely to be heavily guarded.

The main task of reconnaissance and sabotage activities carried out from the Caspian Sea will not be the destruction of the enemy’s military force, but the objects of the oil and gas sector, which provide for the receipt of significant financial resources that can be used to strengthen the armed forces of Azerbaijan.

It will be much more difficult to carry out something like this against Turkey, since the level of equipment of their navy and the training of personnel is much higher than that of the navy of Azerbaijan, but such a possibility cannot be completely ruled out.

The construction of the Armenian naval forces in this format will not be financially burdensome, but at the same time it can become a fairly effective means of influence. Even if the enemy (Azerbaijan) finds out about this, then its costs for countering the threat of actions from reconnaissance and sabotage units will significantly exceed the costs of the Armenian side for its creation.

Armenia has 4 Su-30SM fighters, 8 more units have been ordered. The size of Armenia (roughly) is 150×300 kilometers. Why they need fighters with a range of 4,000 kilometers is a great mystery. No, of course, there is some chance that a group of Su-30SM will strike deep into the territory of Azerbaijan, but, most likely, the sky of Armenia is completely controlled by Turkish AWACS aircraft, and all Su-30SM, at best, will be shot down right over the territory of Armenia ( at least, at least the pilots have a chance to escape), otherwise they will be destroyed by the air defense (air defense) of Azerbaijan, warned in advance by the Turkish side.

No less realistic is the scenario of the destruction of these aircraft by guided weapons right on the ground, there is simply nowhere to hide them at the airfield in such a small country.

Also, the Armenian Air Force has 12 Su-25 aircraft, the use of which in the conflict with Azerbaijan is also likely to lead to their destruction. The best solution for Armenia at the current stage would be to overtake them to the territory of a friendly country to ensure safety. The same should be done with the only available MiG-25 interceptor fighter, if it is still flying. In a similar way, it is desirable to overtake the existing 15 Mi-24 helicopters to another country, or at least disperse them over camouflaged airfields, if, of course, all of the above is not too late due to the complete control of the skies of Armenia by Turkey. 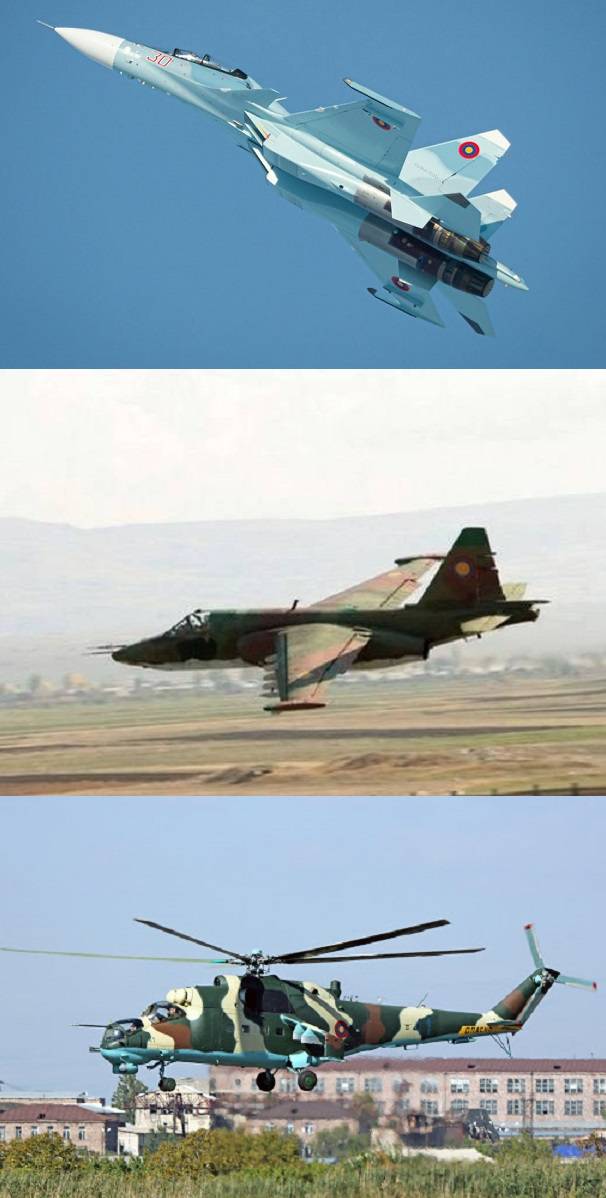 In the confrontation with Azerbaijan and Turkey, the “classical” air forces of Armenia are doomed to destruction

What kind of aircraft are needed for the Armenian Air Force? These are UAVs (unmanned aerial vehicles), UAVs and again UAVs.

First of all, these are small and ultra-small aircraft. The former are needed to adjust artillery fire and aim high-precision ammunition with a semi-active laser homing head, and the latter to provide the armed forces with at least some intelligence information in the absence of other “eyes” in the sky. 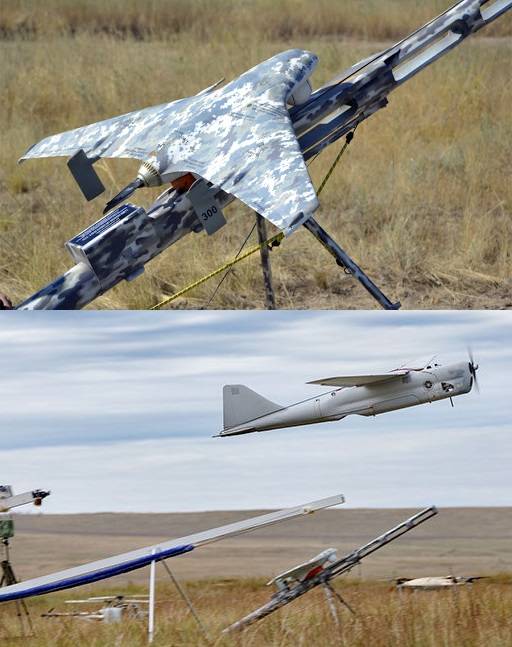 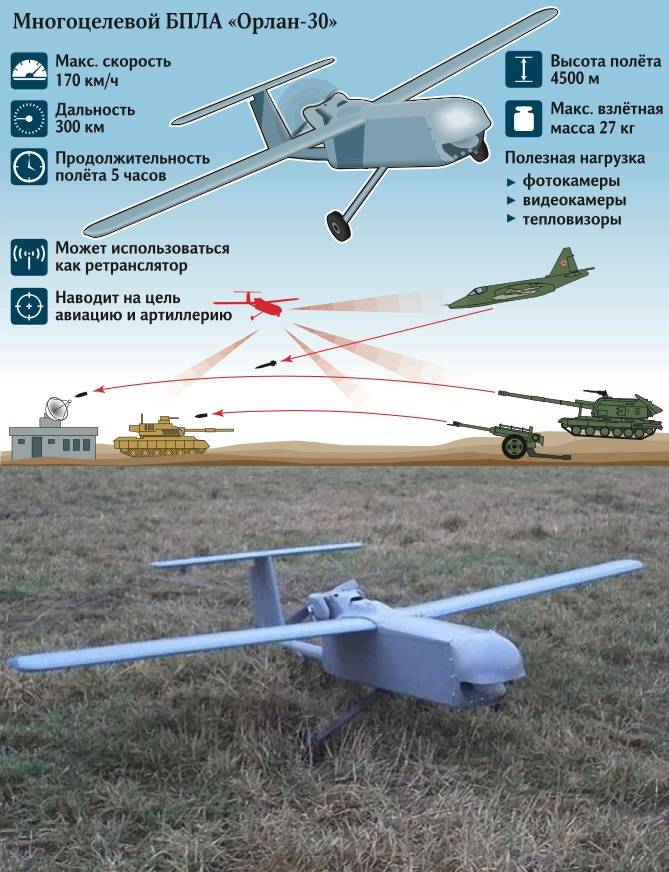 Several hundred UAVs of this type would bring the Armenian Armed Forces much more benefit than the Su-30SM heavy fighters and all the rest of the available aviation.

As a means of striking at great depths, the best solution would be to purchase a number of medium-sized UAVs, similar to the well-known American MQ-9 Reaper UAV. The problem is that in Russia the development of such UAVs is only entering the final stage. Russian UAVs of medium size and weapons for them have not yet been worked out, mass production has not been deployed. 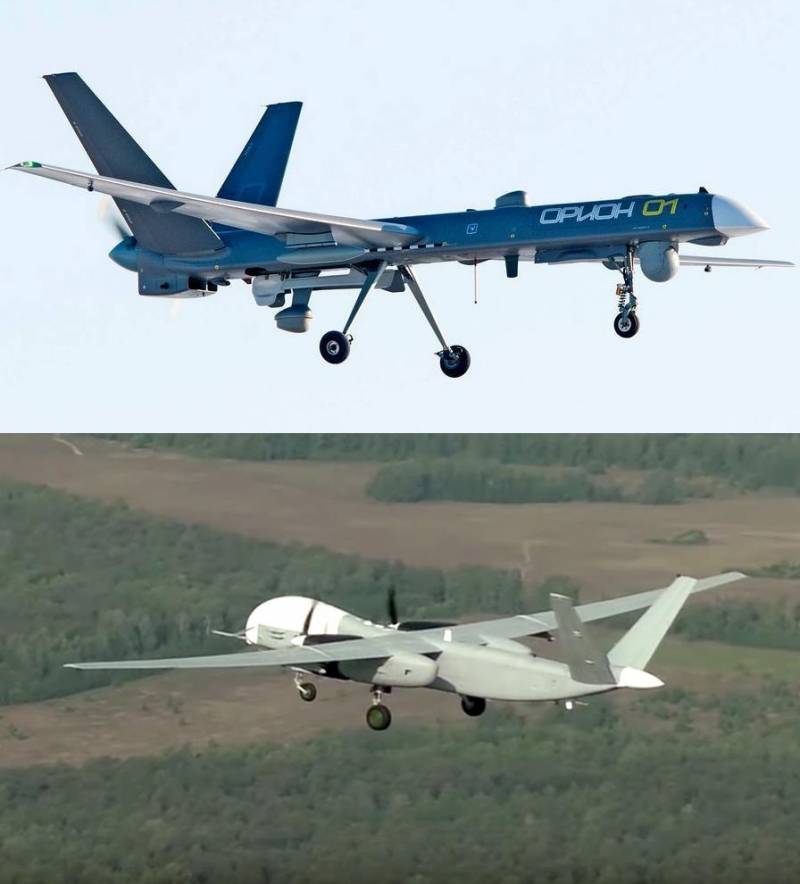 Israel supplies UAVs to Azerbaijan, and it is not a fact that it will agree to work with Armenia as well. There is also China, which is actively developing the direction of UAVs. In particular, the medium-sized UAV Wing Loong is mass-produced, capable of striking with aerial bombs and air-to-ground missiles. 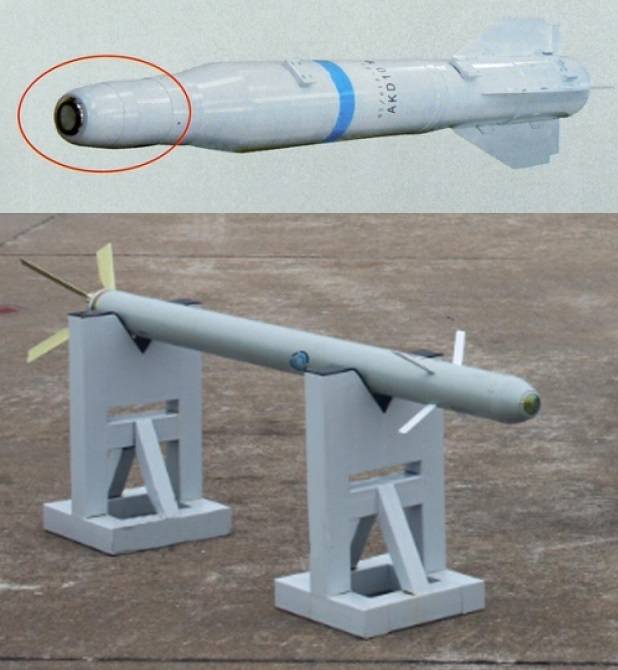 Chinese guided missiles AKD-10 (top) and BRM1 (bottom), which can be used with UAV Wing Loong

According to Reuters, the cost of one Wing Loong UAV is $ 1 million. Even if the actual cost turns out to be several times higher, then Armenia can easily afford a dozen of such aircraft.

In fact, this is all that can be useful to the Armenian Air Force from what it can afford.

In the next article, we will consider samples of weapons for the air defense and ground forces of Armenia, which can be effective in the confrontation with Azerbaijan.