During the current conflict, the aviation of Azerbaijan, represented by unmanned aerial vehicles (UAVs), has a huge impact on the ground forces of the Nagorno-Karabakh Republic (NKR). Military equipment, weapons depots, and military units are methodically destroyed from the air.

The NKR air defense forces are unable to cope with the task of countering UAVs, and Armenia, for one reason or another, does not use the most modern air defense systems available to it, for example, the Tor-M2KM anti-aircraft missile systems (SAM). Accordingly, first of all, the question arises of increasing the survivability of ground forces in conditions of air supremacy of enemy aviation.

One of the ways to solve this problem is the “way of deception” – the active use of camouflage and false targets.

In conditions when its own air force and air defense cannot cope with gaining air superiority or at least preventing the enemy from gaining such superiority, ground forces can only rely on camouflage, which ensures the maximum reduction in the effectiveness of enemy strikes.

One of the main ways is to create a large number of decoys. UAVs are designed to use guided weapons. Despite all efforts to reduce its cost, for example, by developing kits for upgrading unguided ammunition to give them the properties of high-precision weapons, the cost of weapons for UAVs still remains quite high, which limits their use.

The use of false targets forces the enemy to devote more time to identifying targets, which reduces the intensity of strikes. In addition, camouflage of real targets in combination with the use of decoys leads to an increased consumption of guided munitions while reducing the losses of the attacked side.

One of the most effective ways to create false targets is to deploy inflatable dummies that simulate military equipment. 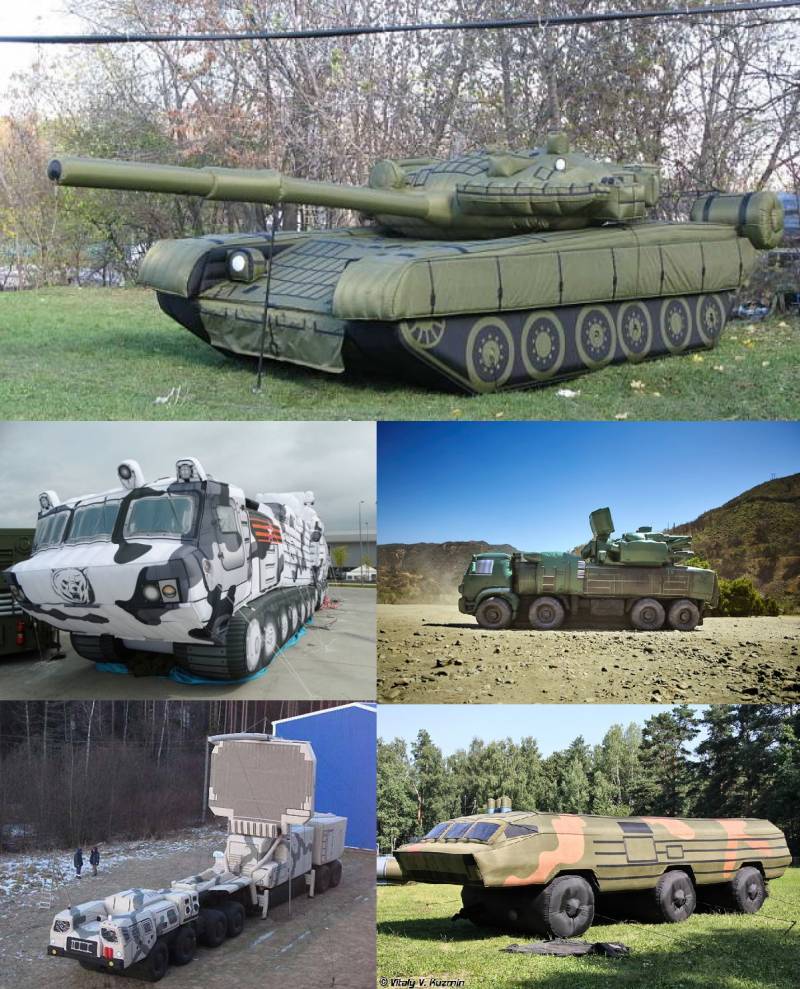 It is difficult to distinguish an inflatable model from a real target in a combat situation. Inflatable dummies can be equipped with heating systems to simulate engine operation, rotating elements that simulate radar.

Inflatable models can be placed separately from real positions, but then the enemy can calculate them by the lack of movement of personnel near them (or it is necessary to imitate it). Also, inflatable dummies can be placed next to the positions of real weapons. For example, real tanks and their inflatable mock-ups can be located in one position, and both must be equally covered with camouflage nets and relief elements. Accordingly, there is a fairly high probability that the enemy will not recognize the real target from the UAV and will release expensive guided munitions at the “rubber” tank. Often, even modern detection systems cannot distinguish between real tanks and their inflatable counterparts, either in the visible, thermal or radar wavelength ranges.

No less, and perhaps even more difficult task for the enemy will be to distinguish real warehouses or power plants from their inflatable counterparts.

Seems to be, the armed forces of Armenia and the NKR are actively using inflatable models, and this is what justifies numerous confirmed cases of the destruction of UAV targets. Unfortunately, in the images from the UAV, it is difficult to understand that it was the inflatable target that was destroyed.

It cannot be ruled out that more realistic mock-ups may appear, made on the basis of a metal or polymer frame with imitation of smoke from cannon shots, etc. In principle, countries ordering a limited amount of military equipment and wishing to increase its survivability can develop and manufacture such mock-ups on their own in parallel with the purchase of combat samples. 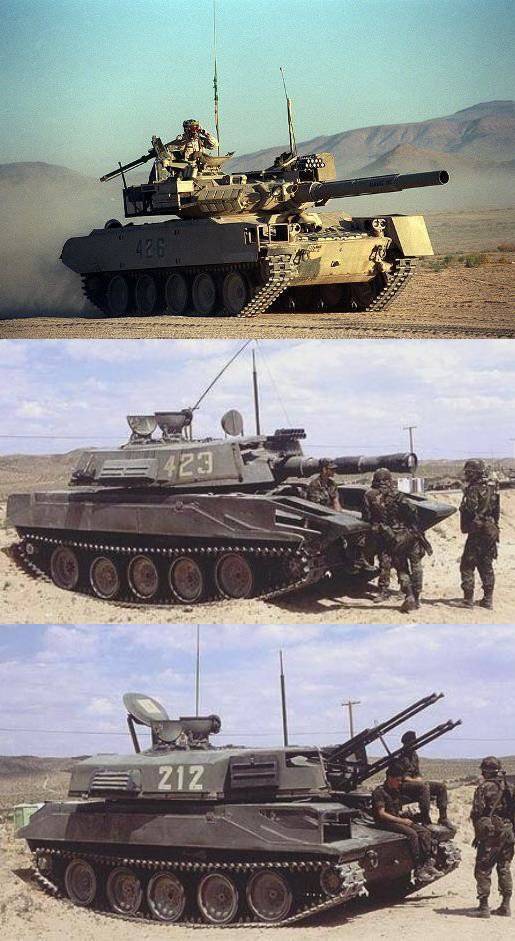 Models of Soviet / Russian military equipment, made by order of the US Army for use in the exercise process

An even simpler solution could be to use 3D images. Of course, they cannot come close to replacing the above false targets, but in any case, they will distract the enemy for a while. You shouldn’t expect that the enemy will spend high-precision ammunition on the “picture”, but he will spend additional time on image recognition. 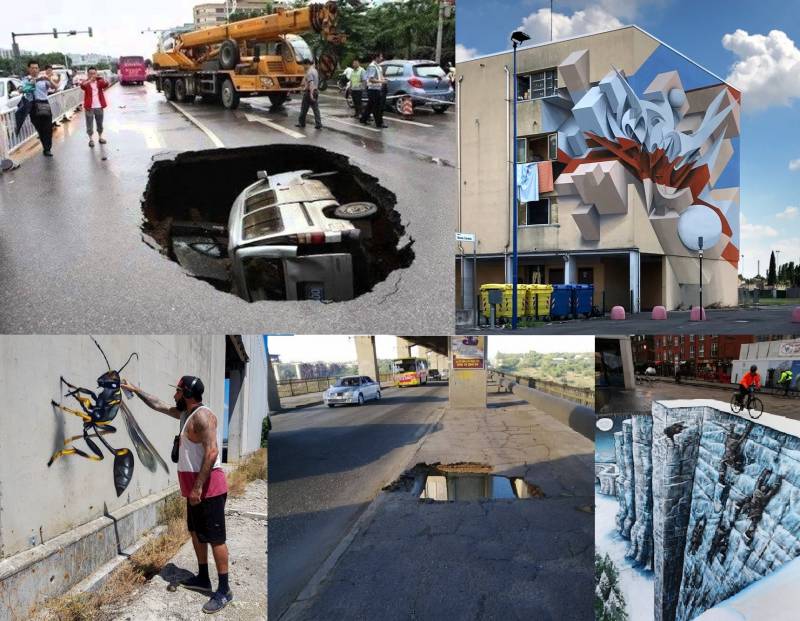 The main advantages of 3D images are their minimal cost and ease of production. Basically, the image data can be applied to something like a banner stretched over a wire frame. Several dozen of these banners can fit in one truck. By moving them, you can pretty much load enemy reconnaissance with work, which will have to analyze satellite or aerial reconnaissance photographs in an attempt to distinguish real aircraft and operational tactical missile systems (OTRK) from their flat counterparts with a drawn shadow.

You can also draw images “stationary”, periodically covering them with banners with the underlying surface texture. 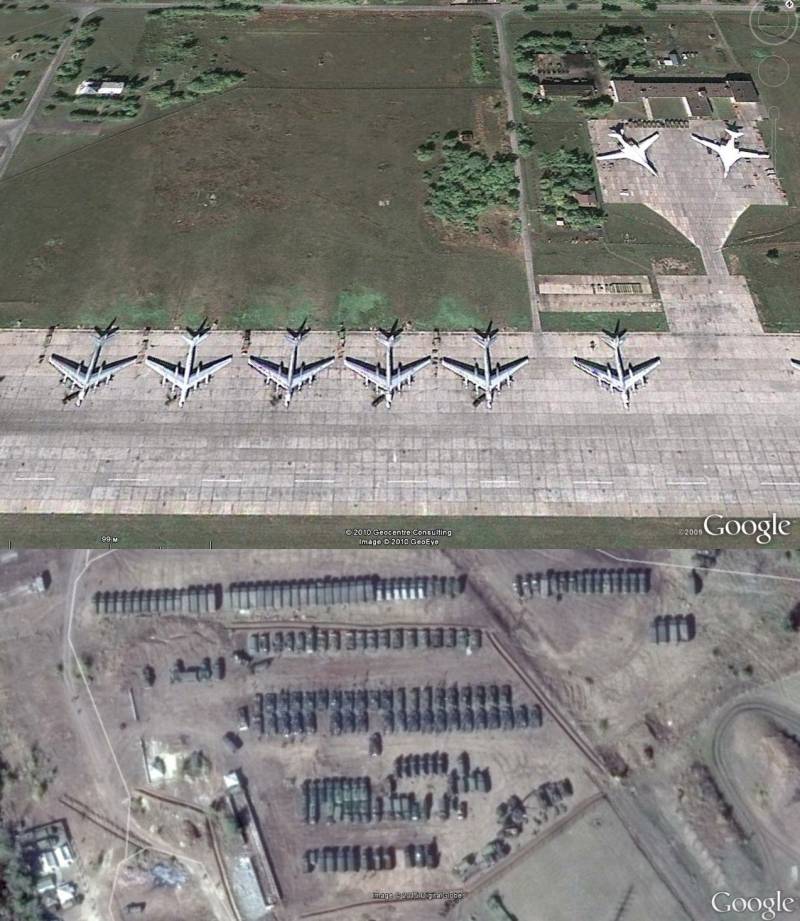 High-quality 3D images may well mislead the enemy when shooting from a great height or from space.

The enemy will be extremely disappointed when, after an OTRK strike at an airfield with combat aircraft, discovered from space images provided by the “partners”, it turns out that these were just drawings.

It is necessary not only to deploy decoys, but also to ensure effective camouflage of both real and decoys. The use of camouflage nets is one of the simplest ways to solve this problem. Modern camouflage nets not only reduce the visual, thermal and radar signature of protected objects, but also make it difficult to detect activity near these objects, complicating the identification of objects (real targets or inflatable models).

Using camouflage nets is one of the easiest ways to camouflage

To mislead the enemy about the activity of real and false objects, in addition to camouflage nets, smoke installations should be actively used. Modern metallized smoke and aerosols are capable of hiding objects not only in the visible, but also in the thermal, as well as in the radar wavelength ranges.

For the production of fumes, you can use not only specialized solutions, but also ordinary car tires – their reserves in settlements sometimes reach catastrophic proportions. The quality of such a smoke screen, of course, will be lower, but this is the most affordable solution, for which, in addition, you practically do not have to pay. 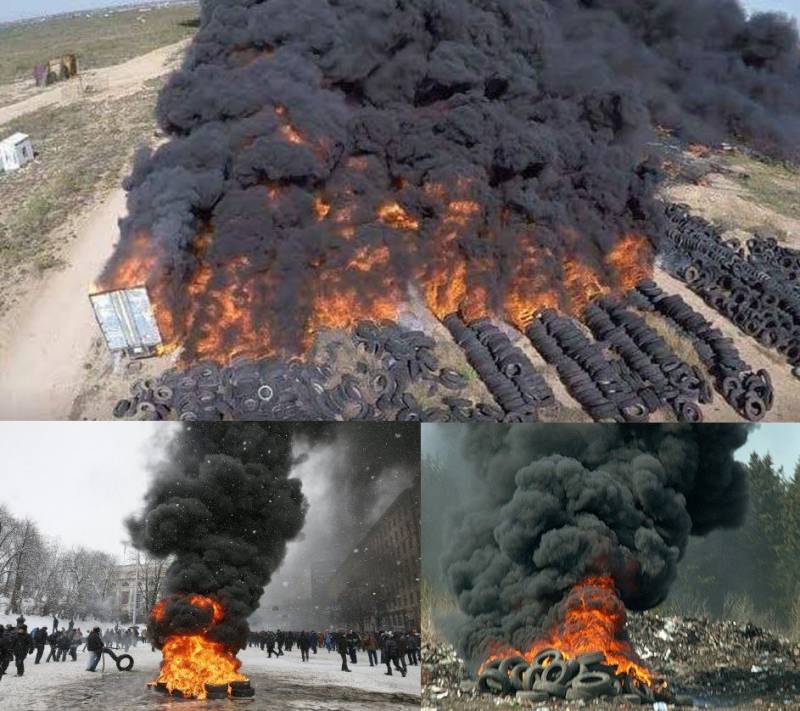 Smoke from burning car tires can significantly hinder the work of enemy reconnaissance.

Distortion of the signature of objects 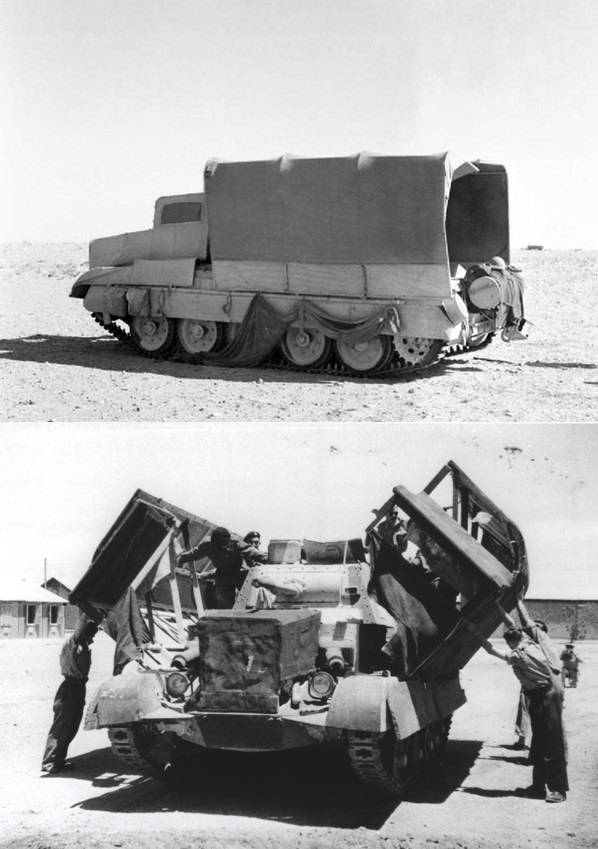 Disguise of a tank as a truck during World War II

Conversely, an old bus or a truck with difficulty moving can be given the appearance of an OTRK or multiple launch rocket system (MLRS).

In addition to the optical range, measures can be implemented to create false radar (RL) signatures. For example, with corner reflectors or Luneberg lenses.

The creation of a radar image of a target is hardly possible only with the help of corner reflectors or it will be quite difficult to implement, but even simply randomly appearing contrasting radar marks will force the enemy to spend additional time on their identification.

One of the main tools of the infantryman was and remains the sapper shovel. With proper use, this is both disguise and protection from bullets and shrapnel. 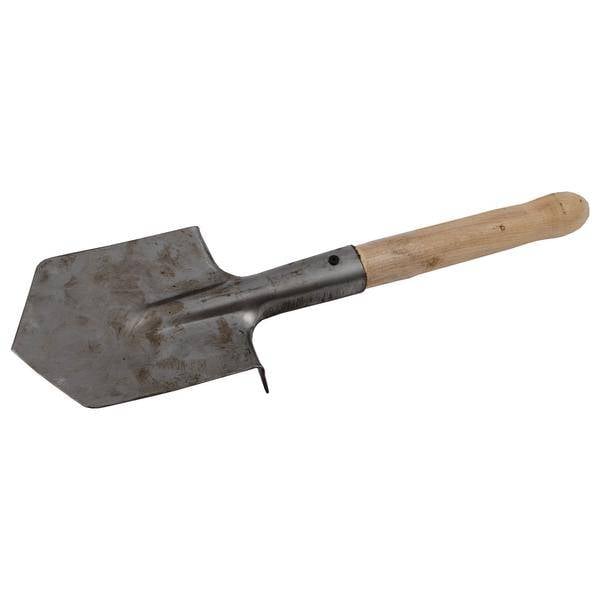 A sapper shovel in some situations may be more important than a machine gun.

During World War I, thousands of kilometers of trenches were dug

The experience of Vietnam, Afghanistan and Palestine suggests that entire underground cities can be built, in which supply depots, hospitals and shelters, camouflaged firing points can be located. In stony ground, they can only be destroyed with powerful anti-bunker ammunition. 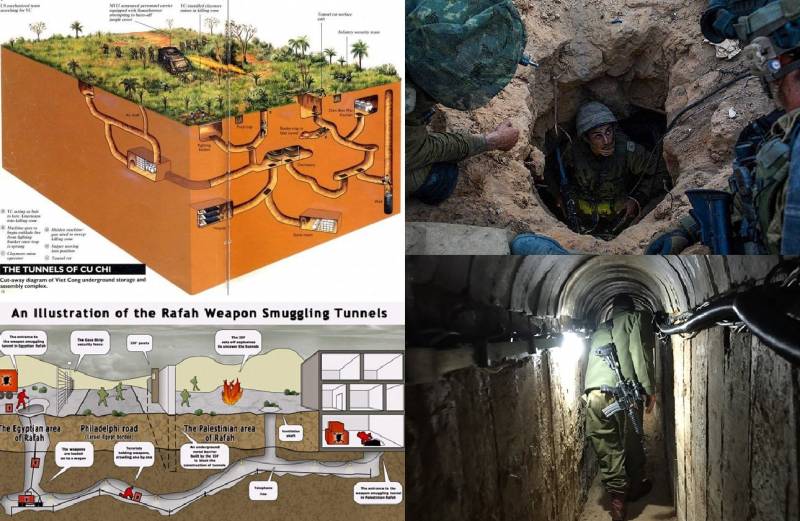 Underground cities of Vietnam and Palestine

Means of camouflage, decoy targets and engineering barriers are not of the same interest as weapons and military equipment. Often this applies not only to ordinary people, but also to the leadership of the armed forces of different countries of the world, at least until real clashes begin. The purchases of camouflage equipment pale in comparison to the purchases of tanks, aircraft and ships.

Meanwhile, this is one of the most effective asymmetric methods of confronting an obviously stronger adversary, which is applicable not only to the situation with Armenia / NKR and Azerbaijan / Turkey, but also, for example, to the military conflict in Syria or Libya.

The measures presented in the article, implemented in a complex, can significantly weaken the impact of enemy aircraft, primarily UAVs, in conditions of enemy air domination and lead to the depletion of the enemy’s reserves of high-precision ammunition.

It should be noted that the key element that determines the effectiveness of the use of camouflage means, false targets and engineering obstacles is the training and discipline of the personnel of the armed forces.