One of the experienced T-34s. On the tower, the onboard periscope and the panoramic device on the roof are clearly visible. Photo Armor.kiev.ua

During production and development, the T-34 medium tank has changed several times, receiving new weapons. At the same time, the combat characteristics remained at the required level, which was facilitated by the gradual development of means of observation and fire control. Consider the evolution of command viewing devices, as well as sights at the gunner’s and gunner’s workplaces.

From the very beginning, the T-34 possessed a developed complex of optical devices at almost all crew workplaces, which made it possible to observe both the road and the terrain as a whole. The commander was supposed to monitor the situation on the early four-seater tank, who was also assigned the duties of the gunner. In some situations, the driver and loader could take over the observation. 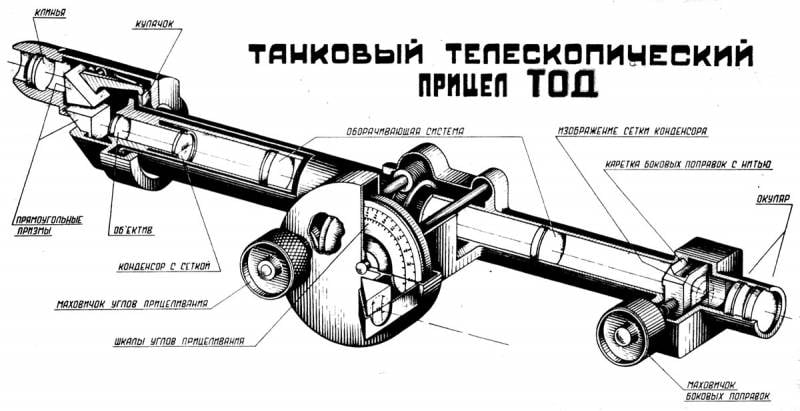 General view of the scope of the TOD series. Figure from the T-34 operating manual / t34inform.ru

The pre-war tanks used the command PT-K panorama with an increase of 2.5x as the main means of observation, installed on the roof of the tower above the commander-gunner. On some machines, the panorama was replaced with a PT4-7 periscope sight. On the sides of the tower there were side-looking periscopes. Thus, without leaving the car, the commander could follow a part of the left hemisphere (without magnification) or the front sector using the PT-K. At the same time, the panorama view was limited both by the external details of the turret and by the ergonomics of the commander’s seat. View through the open hatch was excluded due to the occupation of the crew and general danger.

Early T-34s with the L-11 cannon received a TOD-6 telescopic sight (field of view 26 °, magnification 2.5x) and a PT-6 periscope. For tanks with the F-34 gun, the TOD-7 and PT-7 were intended, respectively, with similar characteristics. The gunner’s sights provided effective cannon and coaxial machine gun fire in all assigned ranges during daylight hours.

Its own sight was on the frontal machine-gun mount of the gunner-radio operator. It was a PU product with a 3x magnification and a small field of view that did not exceed the aiming angles. 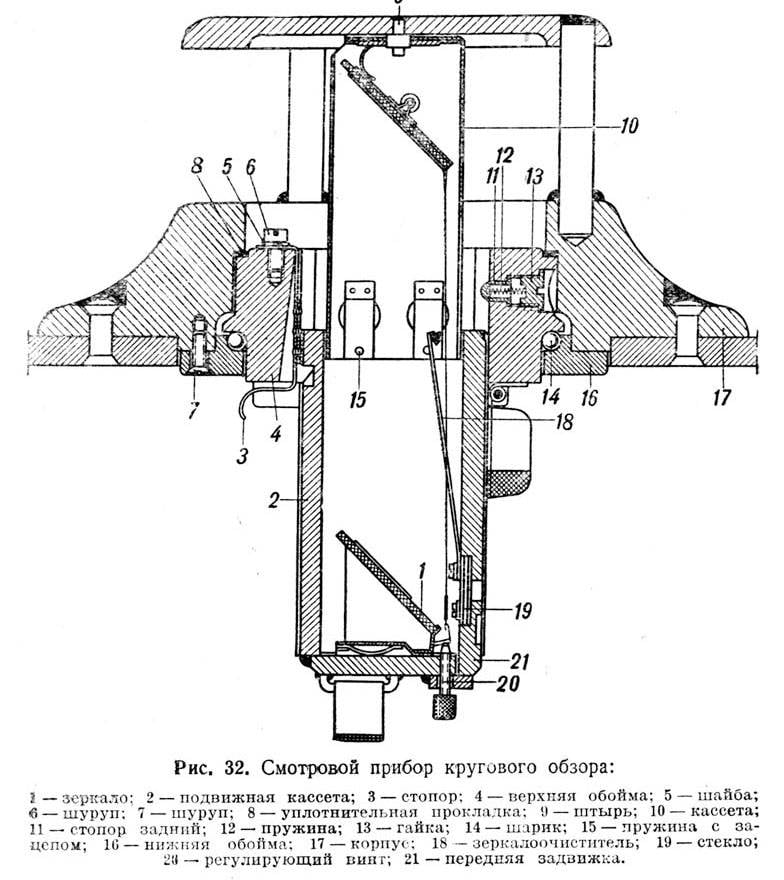 In general, the early T-34s had good visibility and fairly successful sighting devices. However, all the advantages of optics could not be realized. The commander could not monitor the terrain and aim the gun at the same time, which led to certain risks. The other crew members could not help him without being distracted from their duties.

With the growth of mass production, development and optimization of the design, certain changes were observed in all major areas. T-34-76 tanks of different plants from different series could differ significantly from each other, having only some common features. However, even in such a situation, there were general tendencies in the form of replacing some observation devices or introducing completely new ones.

One of the ways to improve was to be a commander’s cupola with viewing slots around the perimeter. Also, over time, they introduced MK-4 periscopic devices with the possibility of a circular view. Such devices were installed above the commander and loader (optional). The driver still had only periscopes for driving, and the shooter had to look outward only through the sight. 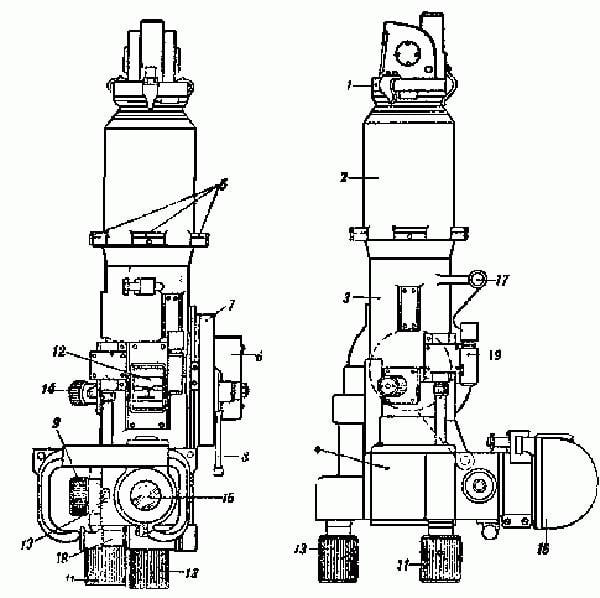 In 1941-42. mass-produced tanks began to receive a gun mount with a telescopic sight TMFD-7 (field of view 15 °, magnification 2.5x) and a periscopic PT-4-7 with the same magnification and field of 26 °. Unlike previous devices, the PT-4-7 sight provided all-round observation without dead zones. Later, a side level for shooting from closed positions appeared at the disposal of the gunner commander.

Replacing the sights improved the fighting qualities of the tanks, but for a long time there were problems associated with the quality of optical glass. As they were resolved, this situation improved. There were operational difficulties. The commanders almost did not use the turret with the MK-4 periscope, preferring to look for targets with the PT-4-7 sight, and then switch to the TMFD-7 located nearby. In fact, the commander’s cupola turned out to be useless. In addition, the complexity of the commander’s work continued to affect the effectiveness of the use of optics.

In January 1944, the T-34-85 medium tank was adopted, which had a number of important differences from its predecessors. The main one was the new tower of increased size, in which it was possible to accommodate three crew members. Fire control tasks were removed from the commander and transferred to the gunner.

The field of view of the TMFD-7 sight in the process of alignment. Figure Wio.ru

The T-34-85 again received a commander’s cupola with viewing slots around the perimeter and an MK-4 device in the hatch. The same periscope was installed over the gunner’s seat. Unlike previous modifications of the tank, there were no advanced surveillance equipment in place of the loader.

To use the 85-mm gun, depending on its type, the gunner had a TSh-15 or TSh-16 telescopic sight (field of view 16 °, magnification 4x), a panoramic PTK-5 periscope and a side level. The radio operator used the PPU-8T telescopic sight with characteristics at the level of previous products.

The T-34-85 was a breakthrough for a number of reasons, and one of the main ones was the increase in the crew, which entailed other changes. Thanks to the appearance of a gunner, the commander was able to focus on observing the terrain, finding targets and interacting with other tanks. Accordingly, the viewing slots of the commander’s cupola were actively used and were no longer useless, as on the T-34-76. For the same reasons, the effectiveness of weapon control has obviously increased – the gunner did not waste time searching for targets and received target designation from the commander.

The commander’s cupola for the T-34-85. The three marks the MK-4 panoramic device. Figure from the 1949 service manual / pro-tank.ru

As the T-34 medium tank developed, the composition and configuration of its observation devices and fire control devices changed several times. The growth of characteristics and the acquisition of new opportunities were provided. At the same time, the optics complex was initially very successful – although not all of its advantages were immediately implemented in practice.

From the very beginning, the T-34 had developed means of monitoring the battlefield in almost all workplaces. They generally met the requirements and provided good visibility, albeit with certain limitations. In the future, the complex of viewing devices was refined – both by simplifying individual elements, and by introducing new, more advanced devices. The result of this development was the T-34-85 tank complex based on periscopes and slots, which provided circular observation with minimal dead zones. 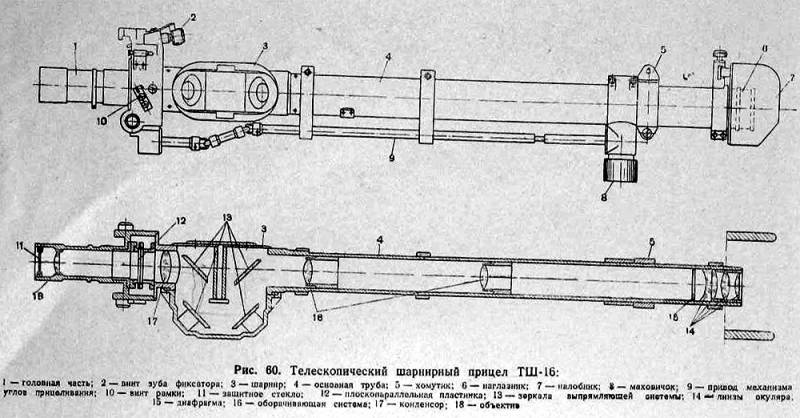 The design of the TSh-16 sight. Figure from the 1949 service manual / pro-tank.ru

However, it was not always possible to take advantage of such systems. Until 1944, the problem of using command and sighting devices by one crew member remained. In addition, in the early periods of the war, the quality of optics fell. Fortunately, over time, the quality of the products has increased, and the workload on the crew has been optimally distributed.

It is easy to see that throughout the production of the T-34, like other Soviet tanks, it had two sights for the main gun. This provided a certain flexibility in the use of a cannon and a machine gun, and also made it possible to continue the battle if one of the scopes failed.

It should be noted that for German tanks at that time, the standard was only one main sight, which, in an understandable way, affected the stability of the weapons complex. In addition, German tank crews often had to conduct surveillance, leaning out of the hatch, or improvise with non-standard means. In both cases, Soviet tanks favorably differed from enemy equipment. 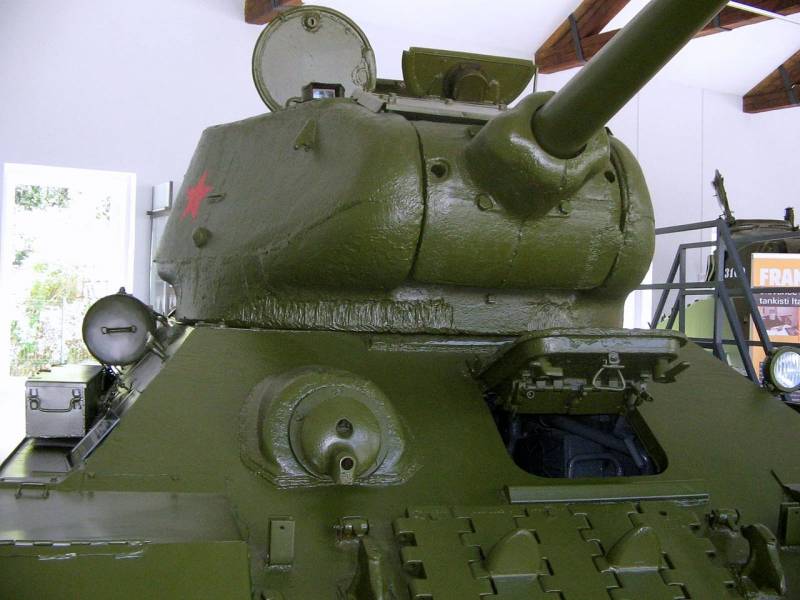 Museum T-34. You can clearly see the location of the commander’s and gunner’s periscopes, as well as the cannon’s sights and course machine guns. Photo Wikimedia Commons

At the level of the project and the composition of the equipment, the optical complex of medium tanks of the T-34 line was very successful and effective. He gave a good overview in different directions and made it possible to effectively use all available weapons. The devices were replaced, removed or supplemented with new ones as needed.

Optical problems were associated with manufacturing limitations and ambiguous concepts in the context of the crew. Most of these problems were eventually solved, and the T-34s received a modern advanced complex of optical equipment for various purposes. Together with other systems, he made the T-34 one of the best tanks of its time.