Different versions of the saying are widely known in the United States, according to which

The small arms designer really made people equal by creating a successful short-barreled weapon. Colt revolvers have become part of the American cultural code and are known far beyond America’s borders. At the same time, Colt’s most famous and recognizable revolver, the Peacemaker, was created after the death of the designer.

American gunsmith Samuel Colt has gone down in history forever as one of the designers who made a significant contribution to the development of revolving weapons. Colt came from an aristocratic and wealthy family that helped him found Colt’s Patent Fire-Arms Manufacturing Company (today Colt’s Manufacturing Company).

The most important of his inventions include the capsule revolver. Colt issued a patent for it on February 25, 1836. Samuel Colt invented the revolver back in 1835. The model created by the designer quickly pushed other systems out of the market, and also gave impetus to the development of numerous revolvers chambered for a unitary metal cartridge.

According to a widespread and well-known legend, the inventor was pushed to the idea of ​​creating a revolver by observing the steering mechanism of the Corvo brig, on which the young Colt made a sea voyage from Boston to Calcutta in 1830. Regardless of what exactly led the designer to the idea of ​​inventing his revolver, it is known that he made the first model right on board the ship, making it out of wood. This wooden mock revolver has survived to this day and is on display today at the Wadsworth Atheneum in Hartford. 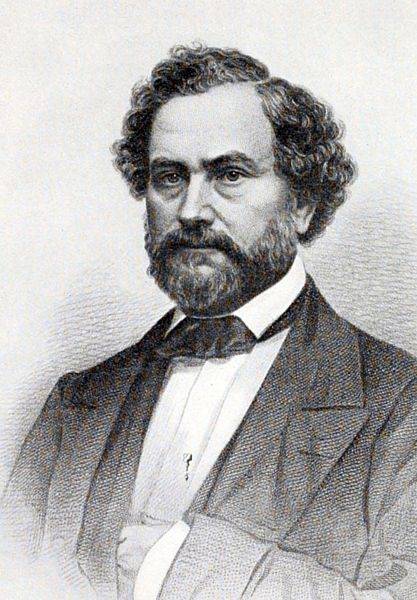 Returning from his trip, Colt founded the Patent Arms Manufacturing Company in Paterson, New Jersey. This company in the period from 1836 to 1842 was engaged in the production of revolvers, revolver rifles and shotguns. Colt’s first capsule revolver was named the Colt Paterson after the city where it was manufactured. Also, this model has its own common nickname “Texas” due to its popularity among the residents of this state. At the same time, even then, Paterson capsule revolvers were produced in different versions: pocket, belt and holster, differing primarily in caliber and barrel length.

A distinctive feature of the Colt Paterson revolver was the presence of a single-action firing mechanism (USM). Because of this, before each shot, the shooter was forced to cock the hammer and only then pull the trigger to fire the weapon. The trigger was recessed into the body of the revolver and pulled out simultaneously with the cocking of the trigger. There was no trigger guard on this model.

The weapon was not very well adapted for mass production, therefore, during its entire existence, the company in Paterson produced less than 2.5 thousand revolvers. The minimal tolerances and the abundance of small springs and parts made the design of the revolver more like a watch than a weapon that could be used in the field. Another problem was that the revolvers could not boast of interchangeable elements, which complicated the process of operating the weapon.

Despite the shortcomings, the military was interested in the new weapon. In Texas, which at that time was an independent republic and had its own army and navy, Colt revolvers and rifles were purchased for the armed forces in hundreds of copies. Former Texas Ranger captain Samuel Walker teamed up with Colt to improve the new short-barreled weapon by modifying the trigger and adding a trigger guard.

This model was named “Colt Walker” and was produced from January 1847. Improved design made it possible to use the revolver in the field and made it more reliable. 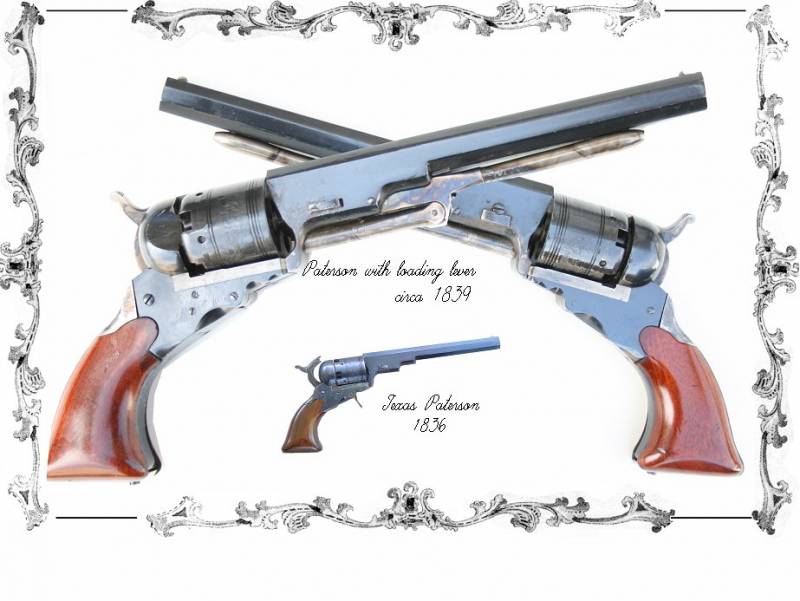 After the Colt Walker revolver, other models under the Colt brand saw the light, including the Colt Dragoon, Colt 1851 Navy, Colt Army Model 1860 and Colt M1861 Navy. However, the most famous and recognizable revolver was born after the death of Samuel Colt. In 1862, the designer died unexpectedly in his hometown from natural causes.

Prior to that, he created a detachment of workers from his enterprise, armed them with manufactured weapons and was going to lead this detachment to take part in the American Civil War on the side of the northerners. At the same time, Colt appropriated the rank of colonel, although he had never served in the army before.

After a sudden death at the age of 47, Colt left a fortune – about $ 15 million (more than $ 300 million at today’s exchange rate). At the same time, the arms business of the inventor and industrialist was inherited by his widow Elizabeth Hart Jarvis.

After the death of Colt, the company did not go well, but everything changed in the early 1870s, when the company’s engineers created a new six-shot revolver for a unitary centerfire cartridge for black powder. The cartridge became known as the .45 Colt. And the revolver itself received the official name – the Colt Single Action Army (Model 1873) single-action army revolver. It was also known as Model P, SAA, M1873. And, of course, as a Peacemaker.

This model of small arms was originally created for the military, primarily for the US cavalry and horse artillery. The model remained in service with the army until the appearance of new double-action revolvers model 1889 chambered for .38 Long Colt. But even after this period, the weapon was repeatedly “called up” for service. For example, during the Spanish-American and Philippine-American wars.

Structurally, the weapon turned out to be quite thoughtful, simple and reliable, which became the key to his successful military service. The new revolver successfully combined the features of all previous Colt models, getting rid of the most noticeable shortcomings. At the same time, the USM device also adopted a number of features of capsule revolvers, taking into account the improvements dictated by army requirements. In the design of the revolver, a ramrod was preserved, which was located under the barrel of the weapon. If in Colt’s capsule revolvers the ramrod was used to tamp bullets, now its function has changed – it was used to extract spent cartridges. 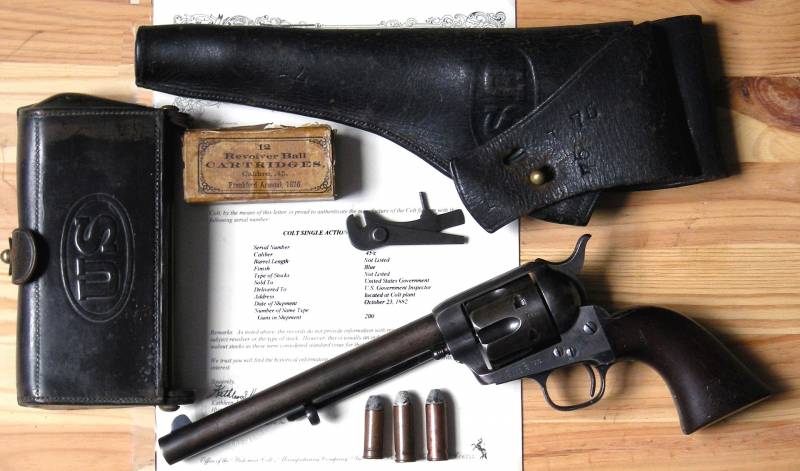 The Colt Single Action Army combined the design, grip and trigger of old Colt capsule revolvers with a more modern monolithic closed frame, as well as modern unitary centerfire cartridges. This design solution was recognized as successful in terms of technology, but not the most successful constructively. Most likely, the preservation of a number of old elements was necessary for the release of weapons using the existing equipment and factory equipment intended for the production of capsule revolvers.

The peculiarities of revolvers of those years included the lack of a fuse, and the “Peacemaker” was no exception. Usually, the shooter did not load the drum, designed for six rounds, completely, with a maximum of five rounds. One chamber in the drum, which was located opposite the barrel, remained empty. Here is such an impromptu “safety”, which made it possible to avoid an accidental shot from a weapon. Since the Colt revolver of the 1873 model of the year was a model with a solid frame, the weapon was reloaded through a side-folding door located on the right side of the weapon (and so one cartridge at a time).

The model was very popular. Put into service in June 1873, this revolver was immediately ordered in a batch of 8 thousand copies. Over the next 20 years, the American army acquired more than 30 thousand copies of these revolvers from the Colt company, which were used in the infantry, and in the artillery, and in the cavalry.

The model remained popular throughout the years of service, despite its simplicity of design and decent weight. The weight of the revolver without cartridges exceeded one kilogram. The handle was wooden. The artillery model had a barrel length of 140 mm, the cavalry model – 190.5 mm. 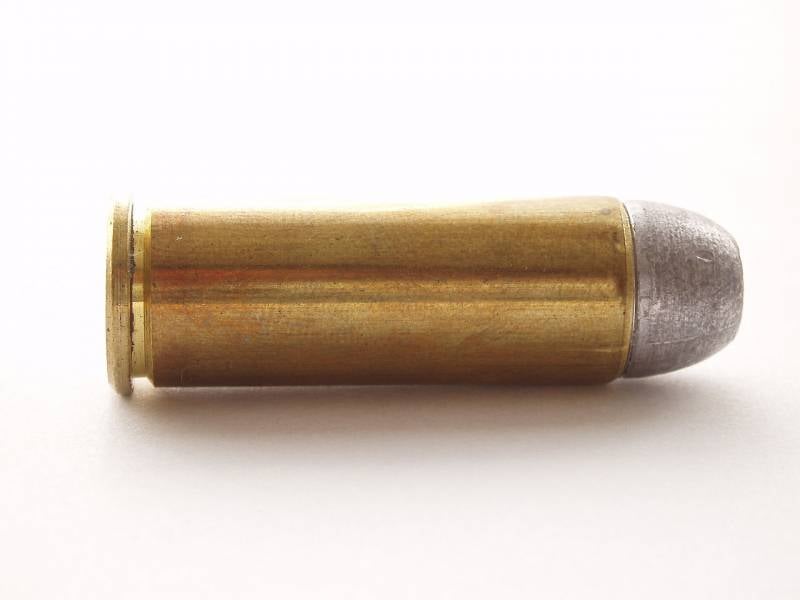 Thanks to the success of the military, who respected Colt’s weapons, revolvers eventually became widespread in the civilian market. Over time, just ordinary Americans became the main buyers of the “Peacemaker”. It was this trade name for the 1973 Colt Single Action Army model that was proposed by the famous American arms dealer Benjamin Kittredge. His Cincinnati company began selling Colt’s most famous revolver, the Peacemaker. Very soon the name “Peacemaker” stuck well and, as they say, went to the people.

Despite the fact that the revolver was created for the army, it gained great popularity as a civilian weapon in the Wild West. Including among cowboys, criminals, sheriffs and government officials. And also among simple thugs and adventurers of all stripes. It is worth noting that in those years the Wild West was wild in every sense of the word. Clashes with Indians, the gold rush, the construction of the first railways in remote places, as well as the stage of primary accumulation of capital contributed to “tensions” in society.

The era of wild capitalism was such a scale that a modern TV series Fargo would envy. For example, the conflict between two large cattle farmers in the state of New Mexico, who could not share contracts for the supply of meat to government agencies, escalated into almost full-scale hostilities that went down in US history as the “War in Lincoln County”. It is believed that in this internecine conflict between two opposing companies, approximately 60 people died.

Civilian versions of the Colt revolver were produced for different cartridges, not only under the .45 Colt. So, in 1877, the Frontier revolver was presented for a new all-metal cartridge .44-40 center-firing. This cartridge was used together with the Winchester Model 1873 lever action rifle. In fact, it was a ready-made armament complex for a single cartridge, which greatly simplified the life of the owners of both types of weapons.

The new revolvers were popular, but expensive by American standards. In the 1870s, a new Peacemaker (or Frontier) revolver could cost roughly $ 17.5 ($ 330 at today’s exchange rate), which for many at the time was the average monthly salary. 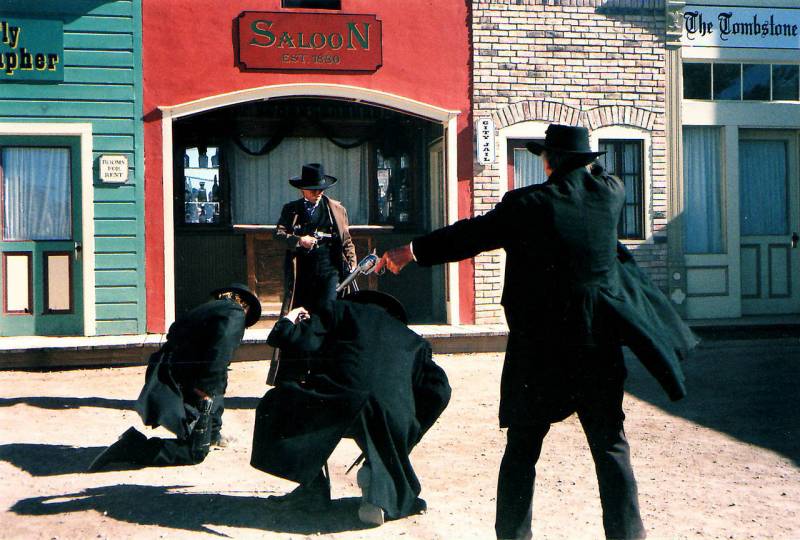 In fact, this is not so much. Colt revolvers were never the most common weapon in the Wild West. For example, revolvers much less well-known company Harrington & Richardson by 1908 had produced more than three million. Despite this, the elegance of the design and the memorable appearance made the Colt revolvers world-famous.

The revolver, which first looked good on stage in performances, in traveling performances and in the Buffalo Bill show, appeared already at the turn of the 19th and 20th centuries in the first feature films: Bar Cripple Creek (1898) and The Great Train Robbery (1903) ).

In the 1950s, Westerns exploded in popularity, and the pistol reappeared in the frame in a huge number of paintings. Clint Eastwood, Kirk Douglas, Bert Lancaster and other Hollywood superstars starred with “Peacemaker”.

Due to the fact that the revolver appeared in hundreds of different films, it became popular again, and the Colt company in 1956 resumed the release of the “Peacemaker” in the classic version. You can still buy this famous revolver today.