Not all developed countries can afford to create their own aircraft engines. At one time, the Soviet Union was in this honorary club, and Russia rested on its former laurels for many decades. Serial production of engines for civil aircraft is a real high-tech, which clearly shows the true level of technology development in the country. Rocket engines and aircraft engines for military equipment are still a step lower than civilian units. First, for a combat vehicle, the economy and low final cost of the product are not as critical as for “peaceful” equipment. Secondly, the resource of modern civilian turbojet engines, coupled with reliability, is higher than that of military counterparts. Especially if the engine is certified under international requirements, for example, the European Aviation Safety Agency. 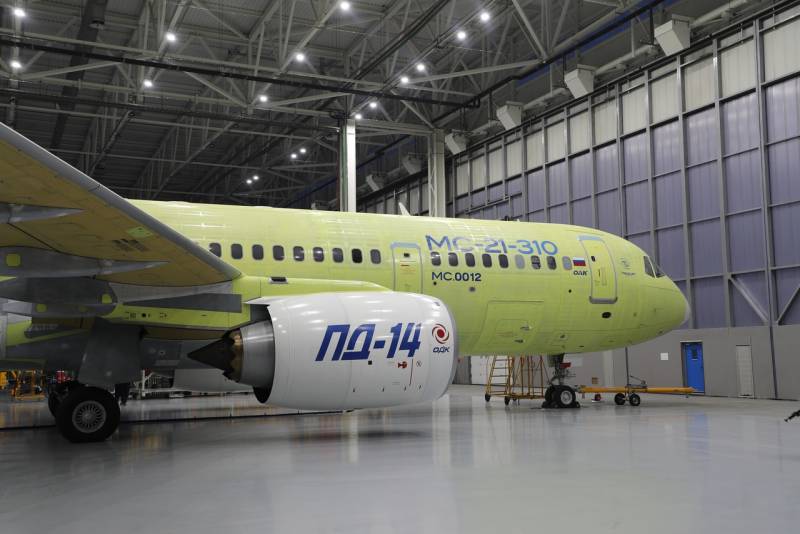 Serial PD-14 under the wing of MS-21. Source: Irkut Corporation

The vast majority of modern by-pass turbojet engines in Russia have their roots in the Soviet past. The PS-90 produced by JSC “UEC – Perm Motors” in various modifications was developed back in the mid-80s. The D-30KP-2 motor has been produced in Rybinsk since 1982, and its basic version has been in production since 1972. Until recently, the most modern was the light SaM146, but this is a Russian-French project in which domestic engineers were responsible for not the most critical “cold” part of the engine. For the sake of fairness, it should be noted that the gas generator of the “hot” part of the engine from the French turned out not in the best way in terms of reliability. At the same time, difficulties arose both with spare parts and with repairs. Only now the level of localization for the repair of gas generators in Rybinsk is approaching 55%. 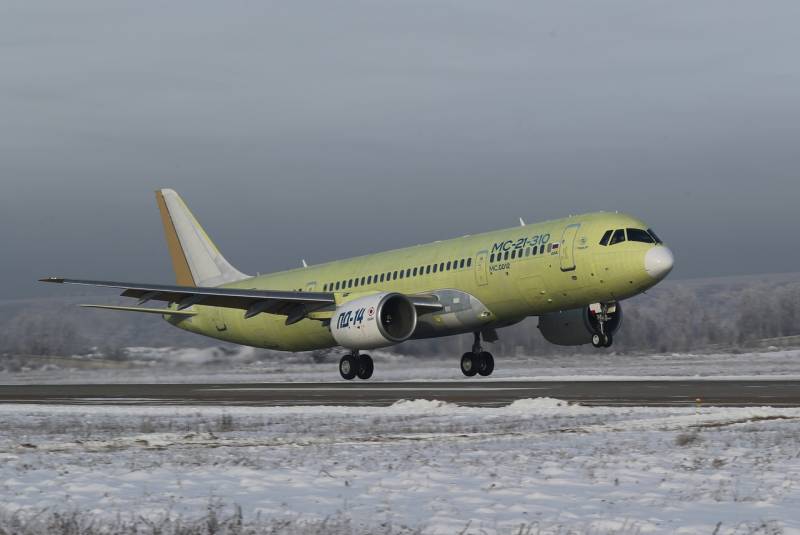 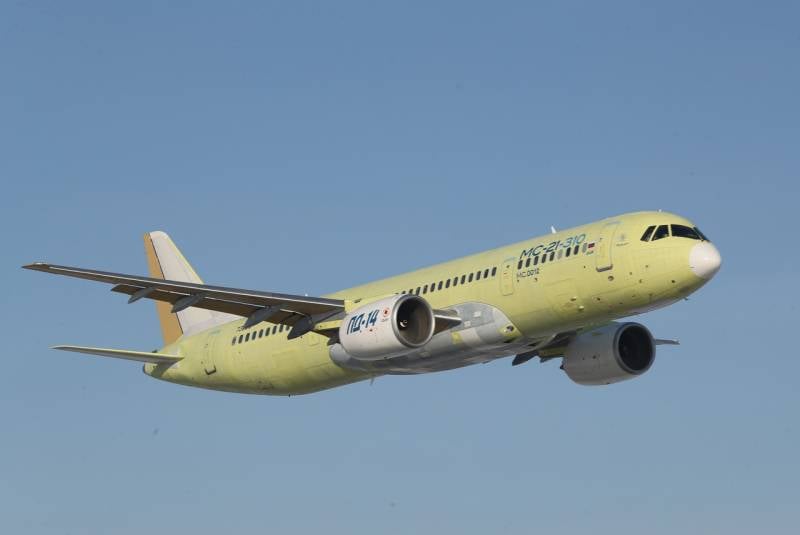 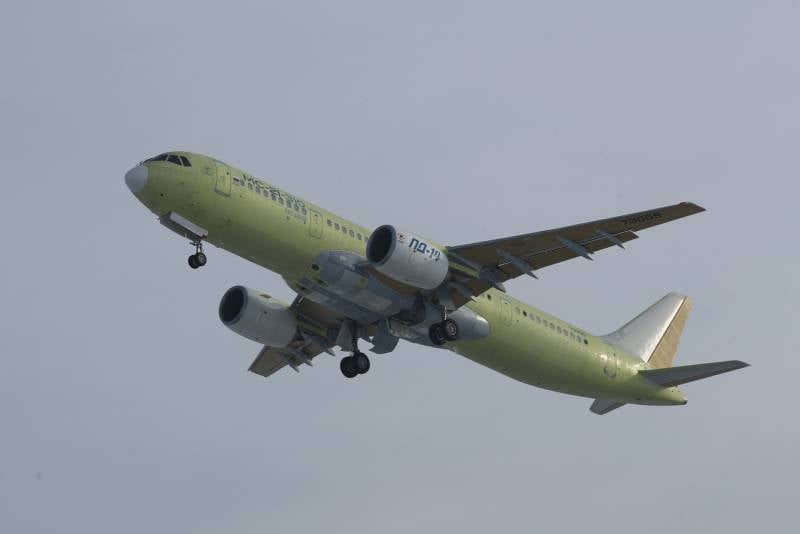 MS-21 with Russian engines for the first time in the air. Source: Irkut Corporation

The only turbojet bypass aircraft engine developed from scratch for the civilian sector in Russia was the PD-14. Perm engine builders received the terms of reference for the engine at the end of 2007, and 11 years later, the United Engine Company signed a contract with the Irkut corporation for the construction of five PD-14s for the MS-21 liner.

In recent years, Russians have had many reasons to be proud of the country’s scientific and technical potential – this is the Armata platform, the Avangard hypersonic strike complex, and the Su-57. But it is the construction of PD-14 that suggests that Russia is returning to the world high-tech market.

Initially, the MC-21 medium-range liner was built with the expectation of installing two engines – the American Pratt & Whitney 1431 G-JM and the Russian PD-14. This decision was made not only due to the lack of domestic analogues at the time of the start of development. It’s all about the customers. The share of engines in the cost of any airliner can reach 30%, and these are the most expensive units in the design in terms of maintenance. It is not surprising that consumers have the right to choose their own power plants, to which the ground infrastructure is better adapted. For example, when purchasing the discontinued A380, airlines previously had the choice between Rolls-Royce’s Trent engines and the Engine Alliance’s GP7200 family. Please note that four companies merged to develop the GP7200 at once: American General Electric, Pratt & Whitney, French SNECMA and German MTU. This is because the creation of a modern engine for a mainline airliner is expensive and time-consuming. 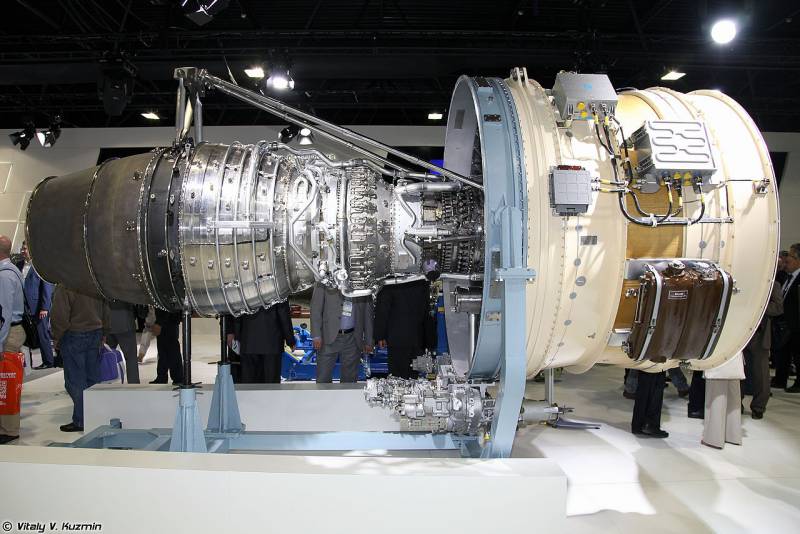 The imported G-JM PW1431 was created on the basis of the PW1000 family, which in various modifications are mounted on Airbus, Mitsubishi and Embraer aircraft. For the MC-21, the largest version was envisaged with a thrust of up to 14 tons and a fan diameter of 2.1 meters. The first ready-made engines from the USA arrived at the Irkutsk aircraft plant in 2015, 7 years after the start of development. Simultaneously with the signing of a contract with Pratt & Whitney, Russia began to create its own PD-14 engine. Over the past 30 years, this is the largest project in the domestic aircraft engine industry. It’s hard to say what would have happened to the entire industry if the PD-14 story hadn’t happened.

A little about the innovations used in the design of the domestic aircraft engine. The All-Russian Institute of Aviation Materials has developed 20 new materials only for PD-14. Research teams of Perm JSC UEC-Aviadvigatel have created 16 new critical technologies from scratch, which in the future will become the basis for new aircraft engines. In particular, high-pressure turbines are equipped with monocrystalline blades capable of operating at temperatures exceeding 1,700 degrees. In the fight for fuel efficiency, the hollow fan blades are made of titanium, which has increased the efficiency of the unit by 5%. To reduce noise and harmful emissions into the atmosphere, the engine is equipped with sound-absorbing composite elements and a low-emission intermetallic combustion chamber. The most important parameter of the Permian motor is its completely Russian origin, which has become a rarity in our time. Most of the “breakthrough” domestic civil engineering is a compilation of outdated Russian and modern foreign units. For examples, you can go to Naberezhnye Chelny. The new electric car Kama-1 borrows lithium-nickel-manganese-cobalt-oxide batteries in China, and the unmanned cargo KamAZ trucks of the Ermak project are equipped with Allison “automatic machines” and Continental radars. PD-14 from this point of view is completely import-substituted.

The PD-14 motor was developed as a competitor to its own PW1431G-JM, as well as the PW1100G / JM for the A320NEO aircraft. This market niche also includes the Leap-1A, Leap-1B, Leap-1C motors from the CFMI consortium (GE / Snecma) for A320NEO, B737MAX and C919 machines, respectively. Taking into account the dollar exchange rate and completely domestic origin, prices on the world markets for PD-14 will be quite attractive.

From the very beginning, engineers rightly planned on the basis of PD-14 to develop a whole family of aircraft engines with thrust from 9 to 18 tons, which will be discussed a little later. The finished gas generator of the Perm novelty, that is, the heart of the motor, was ready for bench tests in November 2010. A ready-made prototype, or, as it is also called, a technology demonstrator, was first wound up at the stand in June 2012. The engine took off for the first time in October 2015, though not under the wing of the MS-21, but together with the IL-76LL flying laboratory No. 08-07. 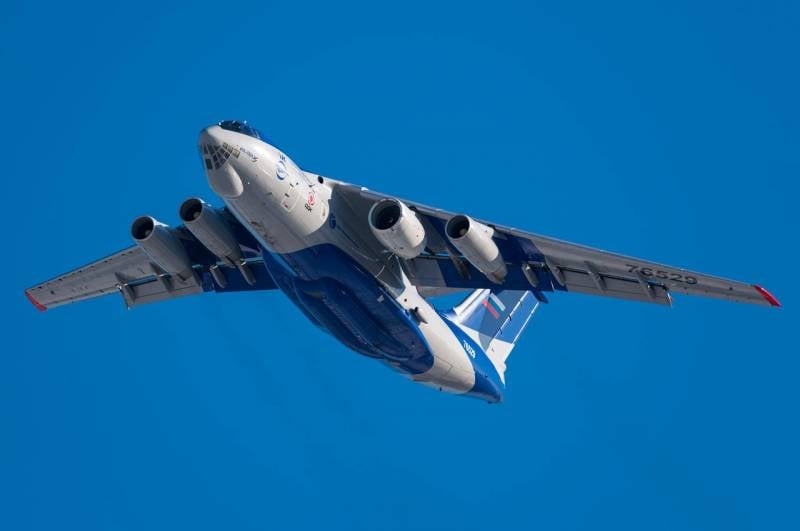 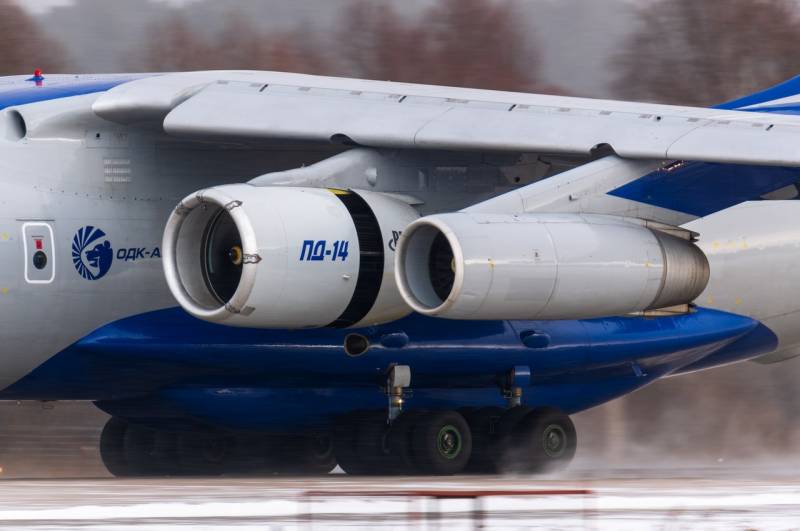 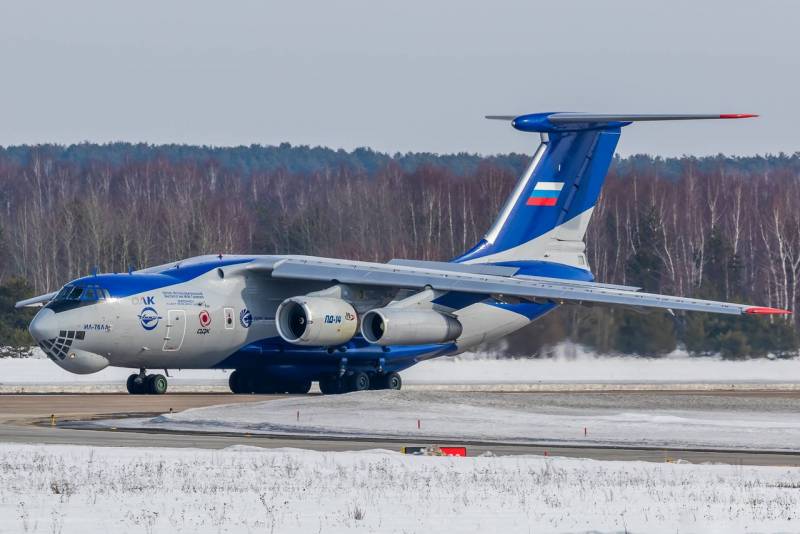 For the first time in the status of a prototype, the PD-14 took off under the wing of the Il-76LL. Source: vk.com

The very first studies of the parameters of the motor confirmed its technical advantage over imported counterparts. Specific fuel consumption has been reduced by 10-15%, and the life cycle cost has been reduced by 20%. The developers also managed to deal with the noise, due to which domestic motors could not be certified in the West. PD-14 turned out to be 15-20 dB quieter than required by the standards of the International Civil Aviation Organization (ICAO). Initially, the top managers of the United Aircraft Building Organization optimistically planned to raise the MS-21 on domestic engines at the beginning of 2018. But, as we can see, this happened only in December 2020. 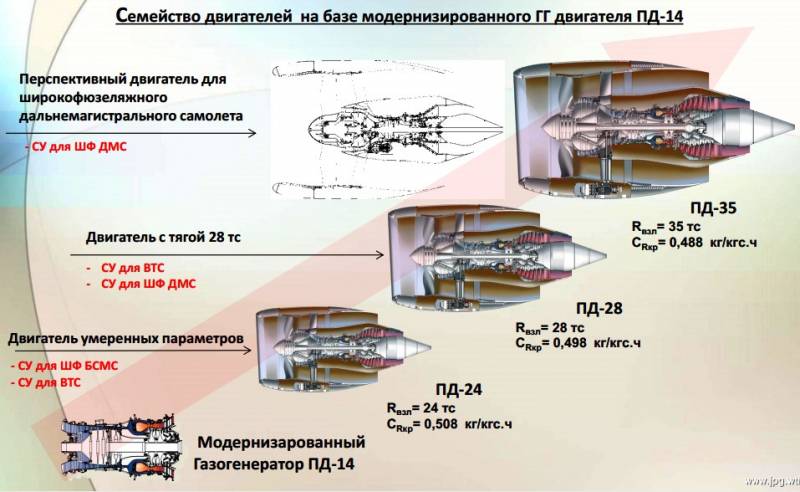 In addition to the options mentioned in the text based on the PD-14 gas generator, the plans include the PD-24 and PD-28 aircraft motors. Source: vk.com

In January of this year, three motors, one of which is a reserve one, covered 4000 kilometers from Perm to Irkutsk on auto trailers in order to be under the wing of MC-21 with number 0012. These motors were manufactured in Perm back in 2018, but only now they turned out are in demand. Last year, two more motors were assembled, on which the MC-21-310 will be certified for the Federal Air Transport Agency. Also in 2021, they plan to receive a similar certificate from the European Aviation Safety Agency EASA. And if everything goes according to plan, the Perm plant will produce up to 50 PD-14 aircraft engines per year. A forced version with a thrust of up to 14.5 tons PD-14A, as well as an even more powerful PD-14M, designed for a maximum of 15.6 tons of thrust, are under development. There is an idea to develop a light version PD-8 for the SuperJet based on the gas generator of the Perm engine.

Then the magic of numbers begins. By increasing the bypass, PD-16 will be built for the heavy version of the MS-21-400 aircraft with a take-off thrust of 17 tons. If the fan diameter is reduced, PD-10 can be assembled with a thrust of almost 11 tons. The helicopter turboshaft version with a capacity of 11.5 thousand l / s based on the Perm turbojet will in the future have the name PD-12V. In this version, it will already find its application in army aviation. And, finally, for the industry in the development of “land” gas turbine power plants GTU-12PD and GTU-16PD.

In 2021, it is planned to launch one more aircraft engine with the name PD for bench tests, only the index will be 35. Previously, engines of this class were not produced in Russia and the USSR at all: thrust range from 25 to 50 tons, fan diameter 3.1 meters, outer diameter 3 , 9 meters, and the length of the nacelle up to 8 meters. The giant is slated for production in 2027. With the advent of this engine, Russia will have hope for the revival of the legendary Ruslans or more advanced analogues.