Grown-up guys “play with a cannon” … So what? When you have everything, why not play?

I saw the Lord himself appear to us in glory,
How He scattered the grapes of anger with a mighty foot,
How He drew the metal sword with a terrible lightning.
He keeps the truth.
Battle Anthem of the Republic

Weapons from museums. Among the weapons of the American Civil War between the northern and southern states, there is no doubt that monsters are remembered – the monstrous Columbiades of 381 and 508 mm caliber, the “Dictator” mortars. But they did not decide the outcome of the battles between the American armies, and they were not the most numerous in the arsenals of both. The most numerous, massive and popular were three-inch guns, or 76.2 mm. And it was they who had a lot of innovations during the years of this war. Moreover, the most famous weapon of this caliber was a muzzle-loading rifled wrought iron cannon, which was adopted by the United States Army in 1861 and was widely used in field artillery. She fired a 9.5-pound (4.3 kg) projectile at a distance of 1830 yards (1670 m) with a barrel elevation of 5 °. The 3-inch cannon was not as effective at firing buckshot as the heavier 12-pounder Napoleon, but it proved to be very accurate at long range when firing high-explosive shells or shrapnel. There has only been one recorded explosion of a 3-inch cannon during operation. The same cannot be said for 10-pound Parrott rifled guns of similar size, which exploded quite often. The Confederate States of America lacked the technological capabilities to produce successful replicas of such a weapon. But the Army of the Confederate States used them, looting from the feds as trophies. 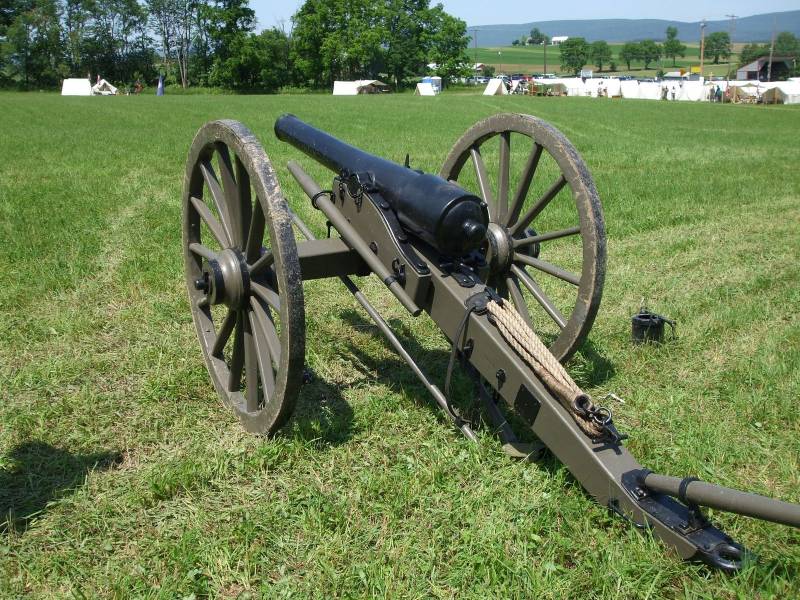 And it so happened that in 1835, during control tests, so many cast iron six-pounder guns exploded that the American Artillery Directorate decided to abandon cast iron and have field artillery guns exclusively made of bronze. Thus was born the highly successful M1841 six-pound field gun. However, American engineers did not abandon their attempts to make wrought iron cannons, however, without much success. Thus, in 1844, during tests on board the Princeton ship, a 12-inch welding gun “Peacemaker” exploded, and many members of the test commission were killed. The reason, as it turned out, was the poor quality of the starting material. However, over time, the quality of the metal was improved. As early as 1854, the Safe Harbor Steel Works in Lancaster County, Pennsylvania, produced iron bars of such high quality that they were used in the construction of lighthouses. And then the superintendent of the company John Griffen proposed to make a cannon by welding its barrel from forged rods, and reaming the hole in the barrel bore. Later, the process was improved by winding a rod in a spiral around a metal cylinder, after which the resulting barrel blank was subjected to welding heat. Then trunnions were added and the bore was drilled. Samuel J. Reeves, president of the parent company Safe Harbor Phoenix Iron Works, approved Griffen’s method, and by the end of 1854, the first cannon with a barrel weighing 700 pounds (318 kg) was made using this technology. 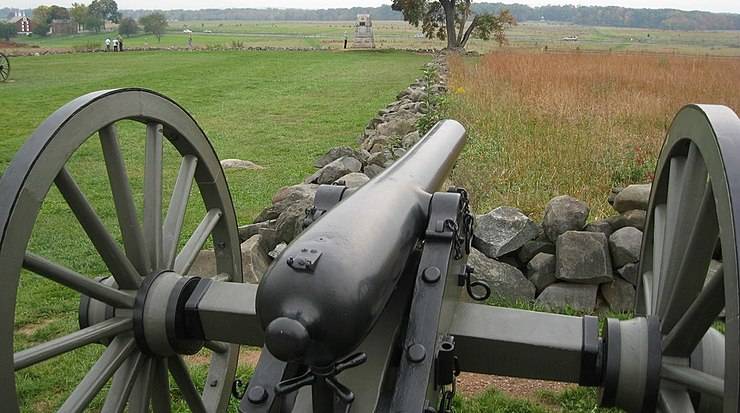 Three-inch by John Griffen. The most massive and popular weapon of the US Army during the Civil War on the Gettysburg Field

The Griffen gun was sent to Fort Monroe, where Captain Alexander Bridey Dyer tested it in 1856, along with Griffen himself as a witness. It was decided to find out how many shots the barrel would withstand at the limit, but the gun fired 500 shots without any visible damage. Then they started shooting from it with increased charges of gunpowder. The cannon exploded on the tenth shot when the barrel was filled to muzzle with 13 cannonballs and 7 pounds (3 kg) of gunpowder. This was a success, after which, as well as Dyer’s very favorable report, four more Griffen guns were manufactured and sent for testing.

On February 21, 1861, the Munitions Directorate requested four 3.5-inch (89 mm) forged guns. The government paid $ 370 for each of the two guns. (None of them survived.) The Phoenix Iron Company also produced several 6-pound 3.67-in. (93 mm) guns, of which the seven that survive date from 1861 and bear the 1855 Griffen stamp imprinted on one of the trunnions. On July 24, 1861, U.S. Army General James Wolfe Ripley ordered 300 wrought iron guns from the Phoenix plant. The Department of Ammunition has finalized the design of the gun, removed all decorations from the barrel, so that the barrel acquired the shape of a gentle curve. Production costs ranged from $ 330 to $ 350 per barrel. 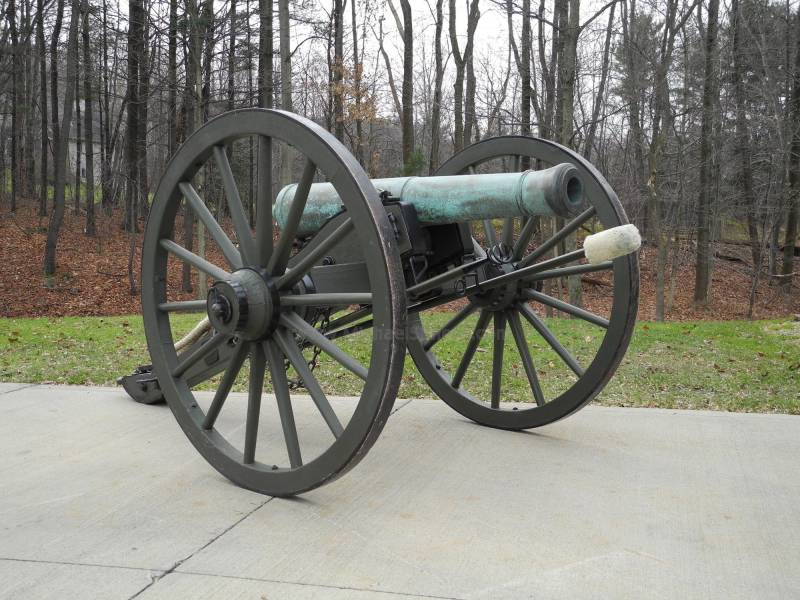 However, pretty soon all the same Samuel Reeves discovered that the use of Griffen’s original technique made it possible to obtain only one good weapon out of three. The technology was still imperfect. 40% of the barrels ended up unsuitable for use. Frustrated, Reeves decided to try to invent a new method of production, and he succeeded. He took a hollow tube or iron rod and wrapped them in sheets of iron. The barrel of the desired diameter turned out. Then the roll of sheet was welded, and the finished barrel was bored from the inside. Reeves convinced patent examiners that his method was different from the patent on April 29, 1862, issued to David T. Yickel, and was granted the patent on December 9, 1862. And although the enterprises of the Confederation were able to establish the manufacture of Parrott’s guns, they did not succeed in making copies of the 3-inch cannon. 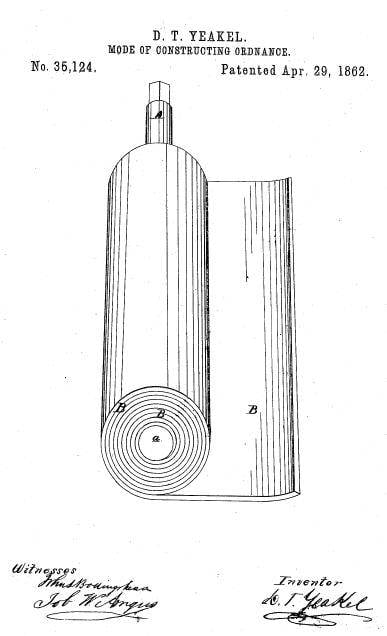 Patent granted to David T. Yickel for the technology of winding a gun barrel from sheet metal

So, what was this weapon that was massively used by both sides of the conflict? Caliber 3.0 inches (76 mm). The barrel of the gun weighed 820 pounds (371.9 kg) and fired a projectile weighing 9.5 pounds (4.3 kg). The gunpowder charge was 1.0 pounds (0.5 kg), which allowed the projectile to be reported at a speed of 1215 ft / s (370 m / s) and thrown at a distance of 1830 yards (1673 m) at an elevation angle of the barrel of 5 °. With an increase in the elevation of the barrel to 16 °, the Griffen gun could hurl the projectile already at 4180 yards (3822 m). Unlike smoothbore guns, the three-inch cannon’s projectile retained two-thirds of its initial muzzle velocity of 839 ft / s (256 m / s) at 1,500 yards (1,372 m), so that its projectile was invisible in flight. The shell of a smooth-bore gun retained only one third of its initial speed, and it was visible in flight. However, a rifled projectile could also become visible if the projectile flew out without rotating, which happened due to the fact that its pan did not expand enough and did not fully enter the rifling of the barrel. The barrel itself had seven grooves, which twisted from left to right. The projectile rotated at one revolution per 11 feet (3.4 m).

The barrel of the gun was mounted on a spent carriage for a six-pound field gun. Since the shell of the new gun was heavier than the previous one, recoil when fired sometimes caused damage to the mountings of the barrel and wheelset. The carriage weighed 900 pounds (408 kg), which was quite acceptable for transporting the gun with six horses, including the charging box. 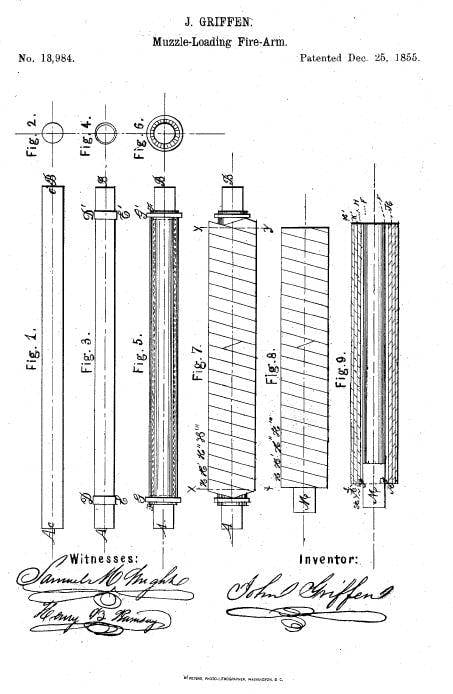 John Griffen patent for the manufacture of a gun barrel

The gun could fire explosive shock shells and buckshot. The use of “bolts” (solid “armor-piercing” shells) was rare. Moreover, the design of the gun made it possible to use a variety of types of ammunition, including Hotchkiss and Shankle shells. Parrott’s shells could also be used, but in an emergency because they did not work well – due to the fact that they were designed for a 10-pound Parrott cannon, which had only three rifling, not seven, as in the Griffen cannon. 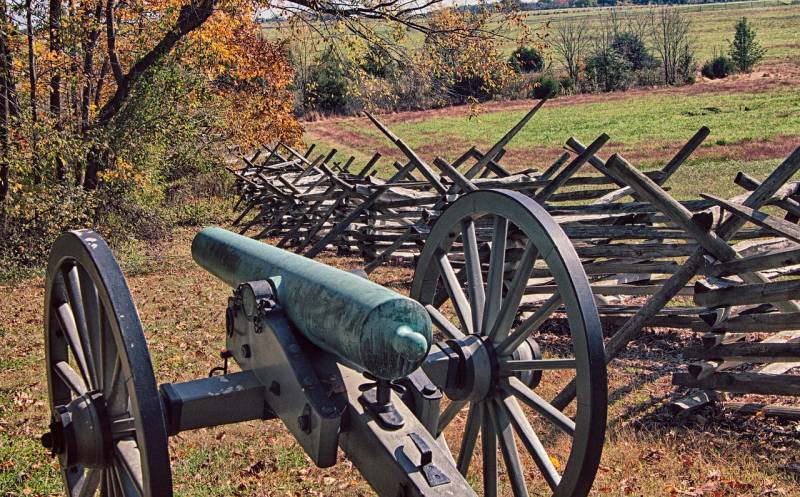 “Three-inch” behind the field fortifications

Why was the shot from the 12-pounder “Napoleon” or the 12-pounder M1841 howitzer more effective than the shot from the three-inch? First, a smaller caliber means fewer “balls” in a grapeshot shot. Secondly, due to the cutting of the barrel, the buckshot is thrown out too wide a cone. For these reasons, Union General Henry Jackson Hunt believed that the effective range of a three-inch cannon was about half the range of a 12-pounder Napoleon, which confidently hit targets with buckshot 400 yards (366 m). 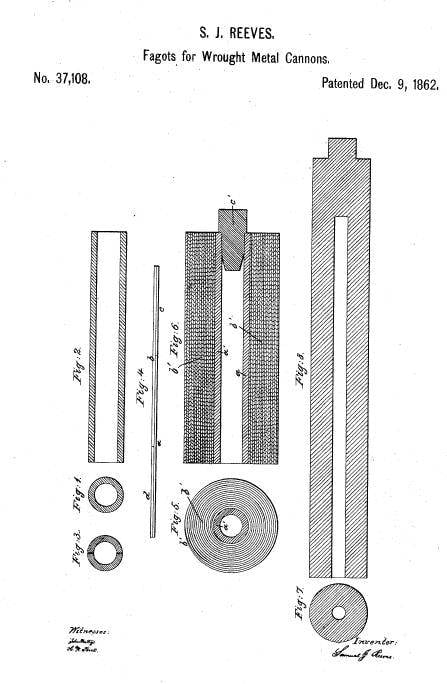 At the beginning of the war, the allied batteries had six guns of the same type. At the Battle of Gettysburg on July 1-3, 1863, 50 of the 65 batteries of the northerners consisted of six guns, and 64 of these batteries had three-inch cannons. The exception was Sterling’s 2nd Light Artillery Battery. Each battery with six guns required 14 crews of six sleds and seven spare horses. The crews were responsible for six artillery pieces, six charging boxes, one van and one field forge. Each gun relied on 50 shells in each charging box. 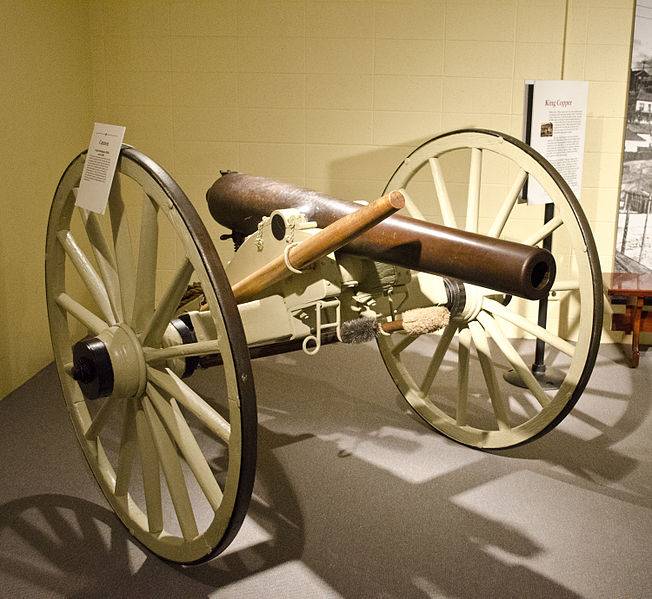 As of 2004, there were over 350 three-inch field guns in the United States, many of which were in national war parks. Which, incidentally, best illustrates the durability of this weapon. Interestingly, the American army used them until the 1880s. Between 1879 and 1881, six of these guns were refined to 3.18 inches (81 mm) and converted for breech loading. The guns performed well, and this experiment ultimately led to the adoption of the 3.2-inch M1897 cannon. In 1903, more than 200 obsolete 3-inch guns were converted into fireworks. 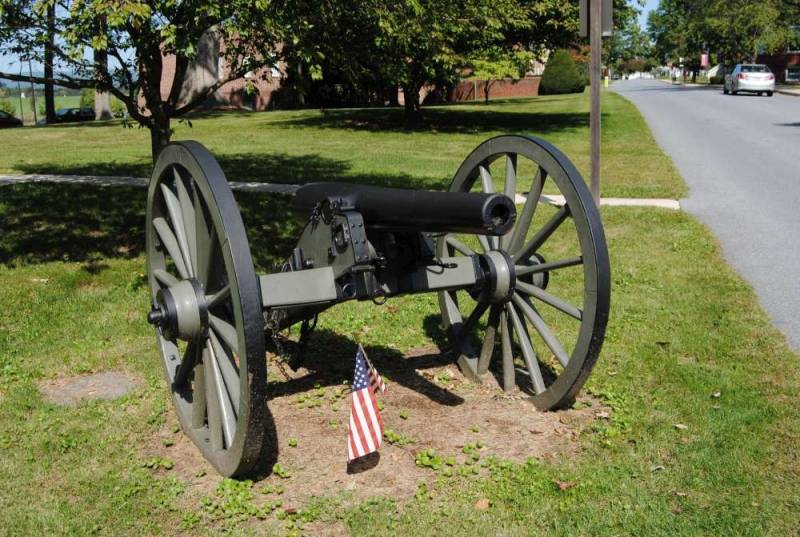 Three-inch by the road

At the Battle of Gettysburg in July 1863, the 1861 model was the main weapon of the North and South armies. So, out of 372 artillery pieces from the federals, 150 were three-inch guns. About 75 on the same battlefield belonged to the Southerners. At the Battle of Antietam on September 17, 1862, the Union army used 93 of these guns, while the Confederate army had 48. By the end of the war, only one ironworks in Phoenixville, Pennsylvania had produced 866 examples of this gun. And another 91 were produced before the closure of production in January 1867. It is not surprising that so many of these cannons have survived.

The high accuracy of the fire of this American three-inch gun was noted. For example, during one of the battles for Atlanta in 1864, a Confederate artilleryman at the Lumsden battery reported that one of his guns was installed in a fortification with an embrasure only about one foot wide (30 cm). Within a short time, three shells of the “three-inch” northerners flew through this hole, and they did not explode. The first hit the southerners’ gun between the trunnions and knocked out some metal. The second damaged the left “cheek” of the gun carriage. The third struck at the very edge of the muzzle, pushing it inward, completely incapacitating it. 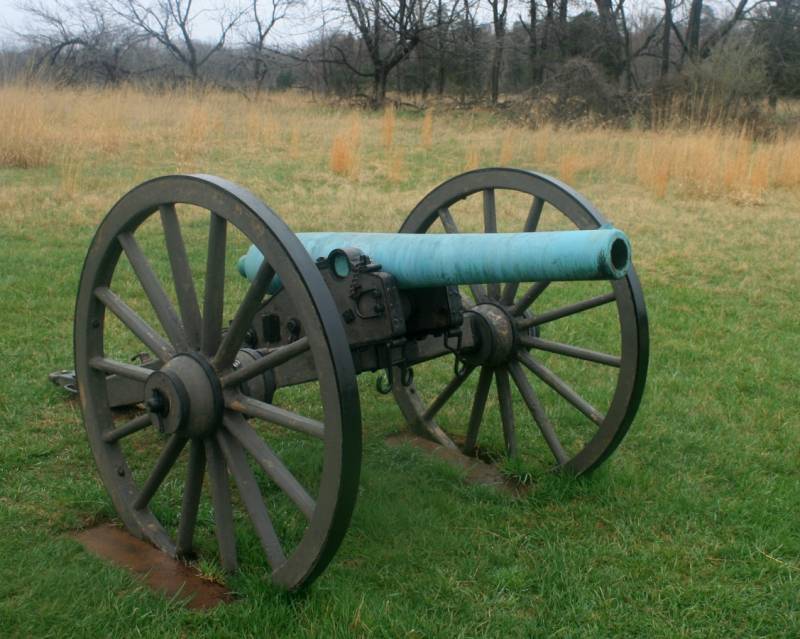 The Griffen cannon had “cousins” of a number of other designers, but made of bronze. With grooves inside, they were not much different from his guns, only bronze was not the best metal for rifled cannons. The grooves in them were quickly erased, so that the trunks had to be re-melted over and over again!