At the turn of the late 1940s – early 1950s, the transition of military aviation to jet engines was practically completed. The future was precisely with jet aircraft, but work on the creation of new propeller driven aircraft was still ongoing. The American experimental fighter-bomber XF-84H belongs to similar projects. The aircraft became famous not so much for its unusual design as for the terrible noise of the turboprop engine. No wonder the plane received the nickname “Thunderscreech” (“Thunder scream” or “Thunder screech”).

The history of the appearance of the XF-84H aircraft

By the beginning of the 1950s, the transition of combat aircraft to jet engines was practically completed, the US aviation industry was no exception. The piston heroes of World War II, numerous Mustangs and Thunderbolts, remained only in the Air Force of the National Guard. At the same time, new models of fighters and bombers received modern turbojet engines (turbojet engines), which provided combat aviation with a high altitude and high maximum flight speed. The increase in flight performance gave jet aircraft undeniable advantages in aerial combat. But at the same time, one problem began to emerge.

The first jet engines were not economical. Large specific fuel consumption directly affected the range of jet aircraft. And at some point, this problem became apparent to the US Air Force. Against the background of ever-increasing flight performance, the reduction in flight range was a rather offensive drawback. To solve the problem, representatives of the American aviation industry were involved. One of the proposed options was the creation of a new fighter, equipped not with a turbojet, but with a turboprop engine. Such engines were much more economical than turbojet engines. 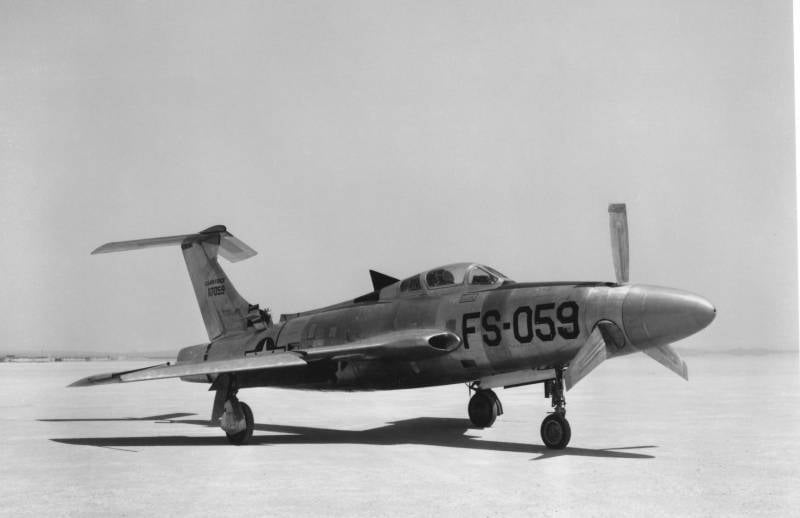 In addition, other options were considered. For example, the use of outboard fuel tanks (PTB) or air refueling of an aircraft. True, in those years, refueling of tactical aircraft was carried out exclusively during long ferry flights. At the same time, PTBs were a simple and well-known solution, but for combat aircraft this was not the best option. Suspended tanks occupied the suspension nodes, reducing the payload of the aircraft.

As a result, the balance was tilted precisely towards the use of turboprop engines (TVD), which were much more economical than the existing turbojet engines and, at the same time, differed in greater power than the existing piston engines. Another advantage was their lower weight. Representatives of the naval aviation showed particular interest in such engines. Since for carrier-based aircraft, flight range was a key value, and a lower landing speed was a very important plus. Over time, naval ideas also captured the minds of Air Force specialists. Fortunately, there was something to work with. At that time, in the United States, Allison had already created a powerful XT-40 turboprop engine, producing almost 6,000 hp. In later modifications, the engine power was brought to 7000 hp. The development of a new combat aircraft equipped with a turboprop was entrusted to the specialists of the Republic Aviation Corporation.

Work on the XF-84H aircraft

Republic Aviation Corporation received an order to develop a new fighter-bomber in the early 1950s. The program itself for creating a new combat aircraft was initiated by the Air Force command in 1951 and was originally joint. It was planned that the Air Force and two Navy will receive four test aircraft, but already in 1952 the American fleet withdrew from participation in the program. Involvement in work on the new combat aircraft of the Republic company was justified and easily explained by the presence of successful developments. It was the engineers of this company that created such famous combat vehicles as the P-47 Thunderbolt and F-84F Thunderstreak. 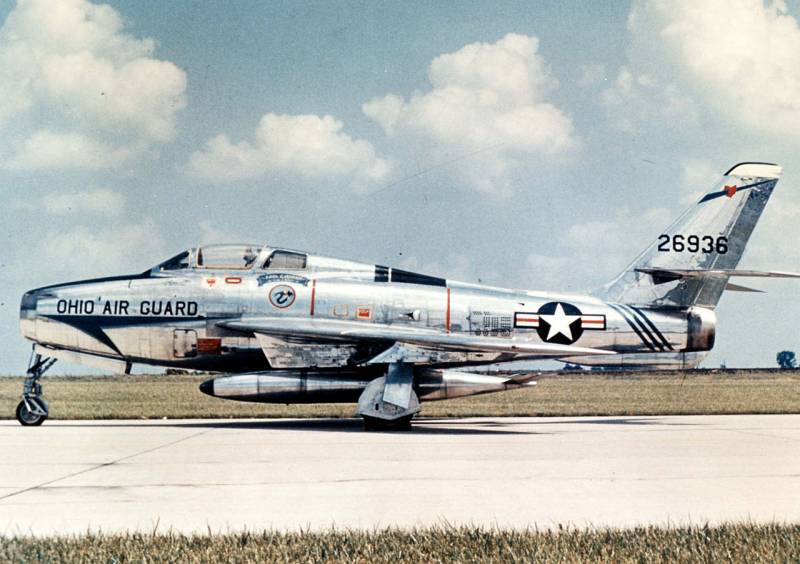 On the basis of the latter, which existed in the modifications of the fighter-bomber and reconnaissance aircraft, it was decided to make a new experimental vehicle with a turboprop power plant. The new turboprop fighter-bomber took over from the already existing serial F-84F aircraft the general aerodynamic concept, as well as a number of important components and assemblies. This approach was justified and allowed the development company and customers to save not only money, but also time. The contract for the creation of the aircraft was signed in December 1952.

The developed fighter-bomber received the designation AR-46 in the company, then the designation was changed to XF-84H. The new aircraft was a single-seat mid-wing with an all-metal hull and swept wing. The chassis was made three-post, retractable. At the same time, the chassis, cockpit, a number of units, including the wing with all mechanization, were completely borrowed from the serial F-84F without making any changes to their design.

Such decisions made the process of creating the aircraft easier, but did not make the work of the Republic’s designers all that easy. They had to work hard enough. So, a propeller was placed in the nose of the fuselage of an experimental fighter-bomber, and the engine air intakes had to be moved to the root parts of the wing consoles of the aircraft. At the same time, the designers completely redesigned the tail unit of the machine, making it T-shaped. The keel has also changed, which, in comparison with the serial F-84F, has become higher and has changed its shape. Also behind the cockpit, the designers placed a triangular aerodynamic ridge. The fuselage of the aircraft was also changed, which became noticeably longer, and outwardly resembled the enlarged “Aircobra” R-39 during the Second World War. 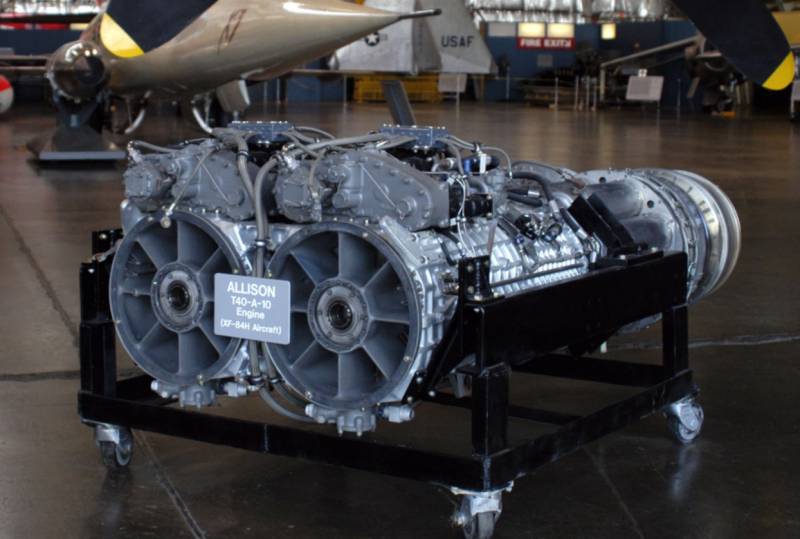 The heart of the new aircraft was the XT40A-1 turboprop engine, which developed a power of 5850 hp. The engine itself was installed behind the cockpit, the gearbox was in the forward fuselage. A six-meter shaft ran between the engine and the gearbox under the cockpit. And since the XT40A-1 engine, in fact, was a pair of two Allison T38 engines, there were two shafts under the pilot’s feet.

The use of the theater, which was so powerful at that time, posed a serious problem to the aircraft designers. Finding a suitable propeller that could withstand this power proved to be very difficult. Only one company, Aeroproducts, took up the solution to the problem. The propeller created by the specialists of this company was most likely the world’s first supersonic propeller. The product itself turned out to be quite unusual: the three-bladed propeller had a relatively small diameter – only 3.66 meters, but at the same time stood out with wide blades (up to a quarter of the span). Later it turned out that at maximum speed, the tips of the blades of this engine moved at a speed of Mach 1.18.

Tests of the noisiest aircraft in history

In total, Republic produced two experimental XF-84H fighter-bomber. The new aircraft took off for the first time on July 22, 1955. To this day, one copy of the fighter has survived, which is located in the National Museum of the United States Air Force at Wright-Patterson Air Force Base in Ohio. The second plane was scrapped. As you might guess, the tests of the new aircraft were unsuccessful. For example, during the tests, the design speed was not reached. It was believed that the XF-84H would be able to fly at 1158 km / h, competing with jet models, but in fact only managed to develop 837 km / h.

The testing process itself lasted no more than a year, already on October 9, 1956, the program was officially closed. On all flights from Edwards Air Force Base, Republic test pilots flew the aircraft, and no Air Force representatives were involved. In total, both cars made 12 flights, of which only one was successful, and the rest were accompanied by accidents and breakdowns. During the flights, serious problems with the propeller were identified, in particular, failures of the propeller pitch change system. Also, the testers recorded a very strong vibration of the six-meter shafts, which went from the engine to the propeller. 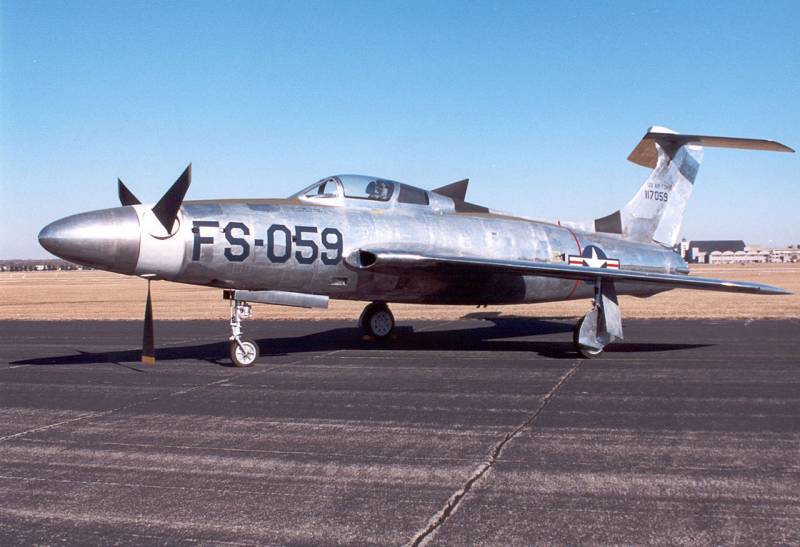 But the biggest problem was the unbearable noise that the plane emitted already on the run down the runway. The speed of rotation of the propeller blades was supersonic, which caused the formation of noise that could not be tolerated. As the technical and maintenance personnel of the base pointed out sarcastically, the aircraft was unable to overcome the sound barrier, but the aircraft did overcome the “noise barrier”. It is believed that it was the experimental XF-84H aircraft that became the most noisy aircraft in the history of aviation. The takeoff noise was heard up to 25 miles from the airfield (approximately 40 km).

The acoustic impact was so great that the staff at the base began to have headaches, dizziness and nausea. And this is at a distance of hundreds of meters from the plane. It was dangerous to be near the fighter with the engine running, even with special ear muffs. During tests on the ground, cases of fainting and epilepsy were recorded. Quickly enough, the staff at Edwards AFB disliked the new experimental machine. Problems also arose at the airbase control tower. Aircraft noise and vibration could damage or adversely affect the operation of sensitive equipment. After evaluating the “sound effects” on the plane before the start, they began to tow as far as possible from people and the control tower. It is safe to say that the unsuccessful completion of the tests was unlikely to upset any of the airbase personnel.

In addition to the ridiculous achievement in terms of noise, the aircraft held the record for the highest flight speed for turboprop aircraft for some time. The Soviet strategic turboprop bomber Tu-95 was able to break this record. True, the Tu-95 is a multi-engine aircraft, and the XF-84H was a single-engine aircraft.