A family of promising ships and vessels from the Nevsky PKB. The system is headed by an aircraft carrier “Varan”, on the flanks – universal amphibious ships

Not so long ago, materials about a new development of the Nevsky Design Bureau called “Varan” appeared in the open press. This project proposes the construction of an aircraft carrier with broad capabilities, and in the future, on its basis, it is possible to create a multipurpose unified platform for the creation of ships of other classes. This potential of the Varan project is determined by the use of a number of interesting solutions of one kind or another.

According to the published data, to date, “Varan” has passed the stage of creating a preliminary design, and now the preliminary design of individual elements of the ship is being carried out. Plans for the construction of such ships, for obvious reasons, are not yet available.

An aircraft carrier or a universal naval ship (UMK) of the “Varan” type should have a length of approx. 250 m, deck width up to 65 m and displacement of about 45 thousand tons. It is proposed to equip the ship with an angular flight deck to ensure the operation of aircraft. The UMK should have a flat deck without a springboard typical for domestic aircraft carriers. For take-off, catapults are provided, landing should be performed using an aerofinisher.

The ship should receive a gas turbine main power plant, unified in units with modern combat units of the Russian fleet. The maximum speed is estimated at 26 knots.

The aviation group is proposed to consist of 24 fighter-bombers of the MiG-29K type and 6 helicopters. It is also possible to base up to 20 unmanned aerial vehicles. 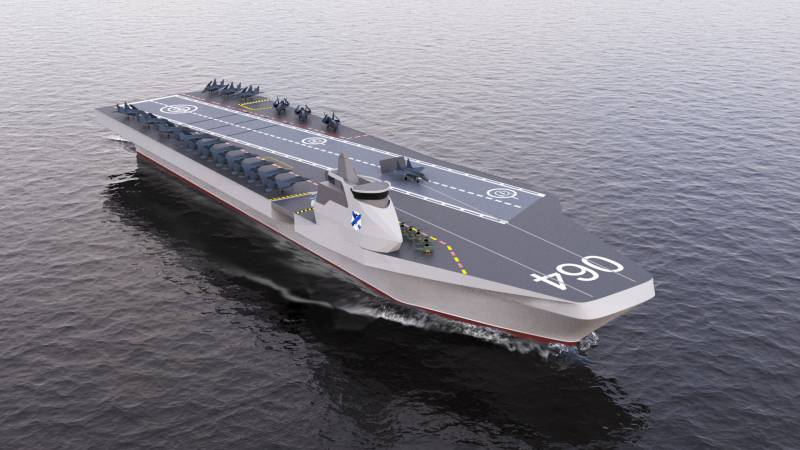 Based on the developments in the Varan UMK, a universal amphibious assault ship can be created. It should be 30 m shorter than the aircraft carrier and have a displacement of approx. 30 thousand tons The payload must be placed inside the hull, and seven positions for helicopter take-off and landing can be arranged on the wide and long deck.

At the heart of the preliminary projects of the UMK and UDC is a unified platform, which includes a hull, a power plant and a number of general ship systems. If there is interest on the part of the customer, it can be used as a basis for ships and vessels of other types. In particular, a hospital ship and a support ship for the Arctic zone are proposed.

When forming the appearance of “Varan”, the production capabilities of the Russian shipbuilding industry were taken into account. The main dimensions and displacement make it possible to build UMK or other ships on a unified platform at all major domestic factories. A radical modernization of facilities for the organization of production is not required.

The Varan project proposes to use a modular architecture. It is envisaged to manufacture separate sections of the body with all the necessary equipment inside, which must then be joined into a single structure. A similar method can be used in the construction of any ships on a universal platform. 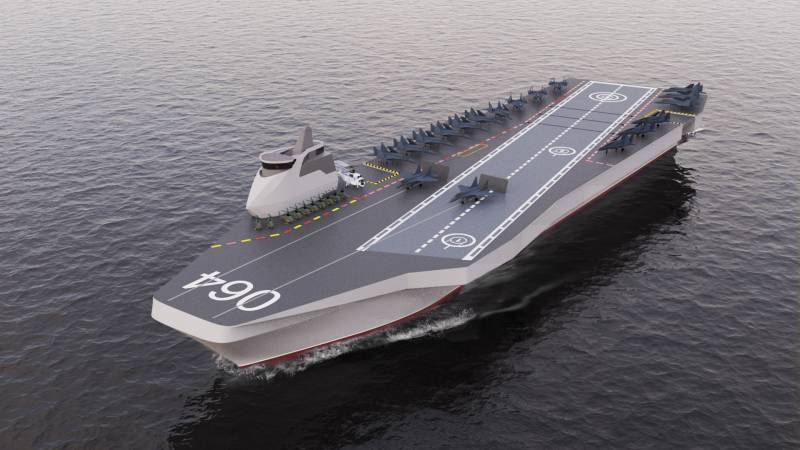 Additional benefits in the course of construction and operation should be provided by the use of a number of ready-made units already mastered by the fleet. UMK “Varan” is proposed to be equipped with engines, other elements of the power plant and general ship systems that have already found application in the fleet.

It is assumed that a modular approach to construction, maximum unification and the launch of serial production will reduce the time and cost of building ships. In this respect, the construction of “Varan” will not fundamentally differ from the construction of other modern ships of the same size and displacement.

The proposed UMK in the version of an aircraft carrier can have quite wide combat capabilities, but its potential is limited by the available volumes and displacement. Obviously, the aircraft carrier “Varan” should be inferior to larger ships in all main indicators, but modern technologies make it possible to achieve maximum results.

The projected aircraft carrier can carry up to 24 aircraft and up to 6 helicopters on the flight and hangar decks. There are two onboard lifts for moving equipment. It is also proposed to accommodate a large number of UAVs on board, incl. different classes and types. 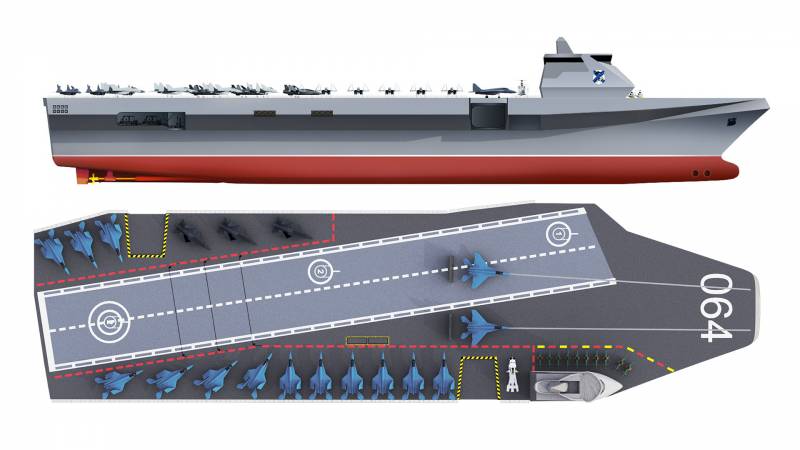 Drones of one kind or another are capable of taking over some of the work of manned aircraft. However, they can have some advantages over airplanes and helicopters. By choosing the right unmanned vehicles, you can organize a constant watch in the air with reconnaissance, ensure that strikes are delivered without risk to people, etc.

In addition, the dimensions and weight of the UAV are of great importance. Modern heavy-duty drones, showing fairly high performance, turn out to be more compact and lighter in comparison with full-fledged aircraft. In carrier-based aviation, this factor is of particular importance.

The media mentions the fundamental possibility of creating an aircraft-carrying cruiser, i.e. ship with an air group and missile strike weapons. The volume of the hull allows you to fit multiple launchers for modern weapons. Also, the ship should receive air defense missile systems.

Other ships based on the Varan platform should have corresponding features and capabilities. So, in the case of the UDC, a significant part of the internal volume of the hull should be given to the crew quarters and the tank deck. At the same time, it is possible to remove equipment intended for aircraft or horizontal take-off and landing UAVs. A unified hospital ship does not need to accommodate armored vehicles, but should have areas for accommodating patients and a deck for receiving helicopters. Similar requirements may apply to a transport ship.

Projects and their prospects

It should be noted that “Varan” from the Nevsky PKB is not the only modern development of Russian specialists in the field of the aircraft carrier fleet. Over the past years, other organizations have repeatedly proposed various options for aircraft carriers with different features and capabilities. At the same time, none of such projects has yet received approval and has not been brought to construction. A similar situation was previously observed in the context of universal amphibious assault ships. 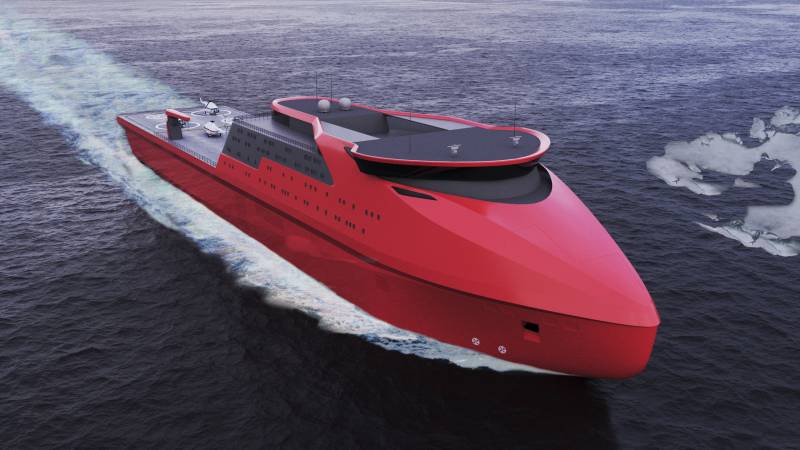 Design look of a universal transport and hospital ship

The reasons for this situation are simple and understandable. Despite some interest in this topic, the Ministry of Defense has not yet initiated a full-fledged development and preparation for the construction of a new aircraft carrier. As a result, the proposed projects from different organizations do not yet have real prospects, and their future remains in question.

However, new warship designs such as the Varan are not useless. As part of this project, the Nevskoye Design Bureau is currently working on the technical and technological aspects of the construction of promising ships. The potential and perspectives of the universal platform as a concept and as a specific product need to be explored. You also need to work out various aspects of modular construction. The Russian Navy does not yet have full-size deck UAVs, and this area also needs to be studied and developed.

Thus, the main goal of the current advance projects, incl. “Varana” is the study of new ideas and solutions to create a reserve for the future. Accordingly, when the armed forces decide to develop and build an aircraft carrier, shipbuilders will be ready to start creating a project with all the required features and qualities.

Apparently, the project of the UMK and UDC “Varan” will remain at the level of proposals and partially worked out projects. However, its main result will be the well-studied and ready-to-use concepts of a universal sea platform, an aircraft carrier with a mixed manned and unmanned air group, etc. And already on the basis of these ideas, real projects of ships for various purposes will be developed – after receiving the corresponding orders.