Although the main methods of dealing with the sound of a shot were invented at the turn of the XIX-XX centuries, the special services and the military showed increased interest in these developments only before the outbreak of World War II. After the end of the war, interest in such developments did not disappear, on the contrary, the secret services of many countries of the world dreamed of getting a silent weapon. By the early 1960s, the USA and the USSR shared the palm in the tacit competition to create silent models of small arms. It was in the 1960s that a whole series of silent pistols was created in the Soviet Union, including the Groza pistols.

The appearance of the silent pistol “Thunderstorm”

They have always worked on interesting and unusual models of silent weapons in the USSR. For example, already in the 1950s, the ingenious Soviet gunsmith Igor Yakovlevich Stechkin worked on the creation of such samples. It was he who developed, on the instructions of the KGB, a unique three-barreled firing cigarette case, known as the TKB-506A. In the “cigarette case” developed by Stechkin, special silent cartridges were used, which the gunsmith created on the basis of the widespread cartridge for the Makarov pistol 9×18 mm. The weapon was as unusual as possible, but ideally suited for intelligence officers. True, the range of the unusual pistol was short – no more than 7 meters.

It is not surprising that work in the field of creating a silent compact weapon was continued. According to the Kalashnikov magazine, in the late 1950s, the workers of the military unit No. 1154 of the KGB of the USSR designed a new 7.62-mm silent pistol, which received the index “Thunderstorm-58-M”. Subsequently, the pistol was modernized many times and reached the stage of mass production. By design, the new silent pistol was a non-self-loading weapon model with a block of two barrels, which were paired with each other in a vertical plane.

For loading, the barrels of the pistol were folded up like many hunting rifles or pistols of the simplest derringer design. The new silent pistol was equipped only with a self-cocking trigger; it was loaded with a clip designed for two cartridges. For firing from the “Groza”, specially created cartridges 7.62×63 mm “Snake” (PZ) with a cut-off of powder gases in the pistol barrel were initially used, and later upgraded versions of these cartridges under the designations PZA and PZAM. 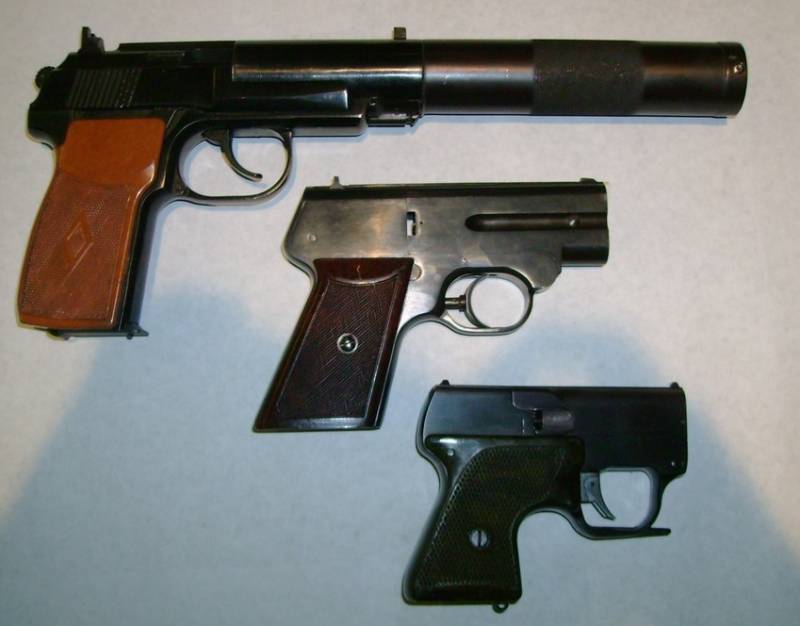 The serial production of the new pistol was supposed to be deployed at the Izhevsk Mechanical Plant (IMZ). The corresponding resolution of the Council of Ministers of the USSR was issued in November 1959. In Izhevsk, experimental workshop No. 28 was responsible for assembling weapons. At the same time, in order to ensure the required level of secrecy at the IMZ, the weapon received a symbol – product “C” For a long time, pistols were produced in extremely limited quantities. At the same time, the plant was in a continuous process of improving and modernizing weapons.

So, already in November 1960, the C-2M model appeared, in 1961 – the C-3M, and in 1962 the C-4M model was created. The last pistol went into mass production and was mass-produced in Izhevsk since 1965. At the same time, the S-4M “Groza” pistols were used not only by the KGB, but also by the military special forces of the GRU. And even later, on the basis of the S-4M pistol, a small-sized special pistol (SMP “Groza”) was created, which was put into service in 1972. The pistol was created by TsNIITOCHMASH specialists by order of the KGB and was even smaller than the S-4M pistols, which were also used by military special forces.

It can be noted that the “derringers” were a class of small pistols of very simple design, most often pocket size. Such a weapon was perfect for concealed carry. The weapon got its name in honor of the American designer Henry Deringer, who lived in the 19th century. The pistols he created were often used as self-defense weapons. One of the most famous representatives of the class was the Remington Double Derringer pistol, which, like the Thunderstorm pistols created in the 20th century, had a single block of two barrels located in a vertical plane. It is worth noting that over time, the term “derringer” itself has become widely used in the arms world to refer to almost all non-self-loading pistol models of a compact form factor.

The second interesting detail related to all Soviet pistols of the Groza family was the chosen method of dealing with the sound of a shot. The designers used a propellant gas cut-off technique. Such a scheme involves the use of a whole complex, which, in addition to the pistol itself, also includes a special cartridge equipped with a sub-caliber bullet (in most cases). In such models of firearms, the powder charge of reduced power is separated from the bullet by a wad-piston. At the moment of firing, such a piston first accelerates the bullet, and then wedges, resting against the protrusion of the barrel or the slope of the sleeve, thus locking the powder gases in the barrel of the weapon. 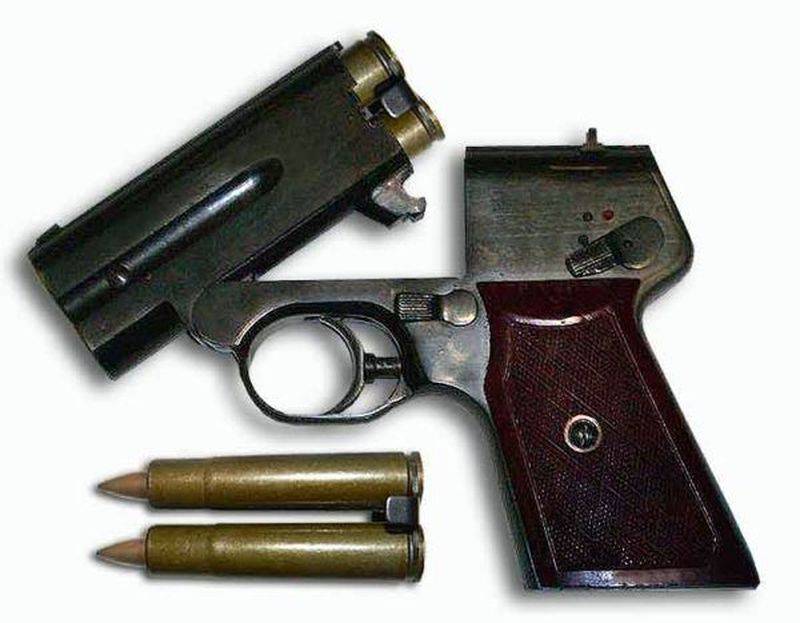 The propellant gas cut-off technique has been proven to be effective at eliminating gunfire sound better than traditional mufflers. But the method also has its drawbacks – weapons and cartridges for it become more difficult to manufacture and more expensive. Also, this method imposes its own restrictions on small arms; it is extremely difficult to use it in automatic systems. But for pistols, the scheme is suitable. Moreover, the ability to do without a silencer makes the weapon as compact and convenient as possible for concealed carry.

Characteristics of the S-4M “Thunderstorm” pistol

The creators of the S-4M “Groza” pistol managed to implement all the conceived solutions in the model. The development was promising and interesting, since it was possible to create a silent pistol without using a silencer and other massive devices designed to extinguish the sound of a shot and hide the flash of a shot. Some experts call “Thunderstorm” the first domestic silent pistol in the entire line of such weapons. The model was not only completely silent, but was also developed from scratch, and was not an option for adapting existing barrels into a “silent” sample.

The area of ​​application of the new small arms was all sorts of special operations, which required completely silent and flameless firing from employees of the special services and army special forces. The new pistol could only be used with the line of previously created PZ / PZA / PZAM cartridges of the 7.62 mm caliber standard for the Soviet defense industry. At the same time, the size of the cartridge itself was not standard – 7.62×63 mm. The use of such cartridges provided the shooter with silent firing, since the sound of the shot was suppressed by locking the powder gases in the case of increased size and increased strength. Since the closing of the gases was carried out through the use of an intermediate piston, this determined the large length of the liner. 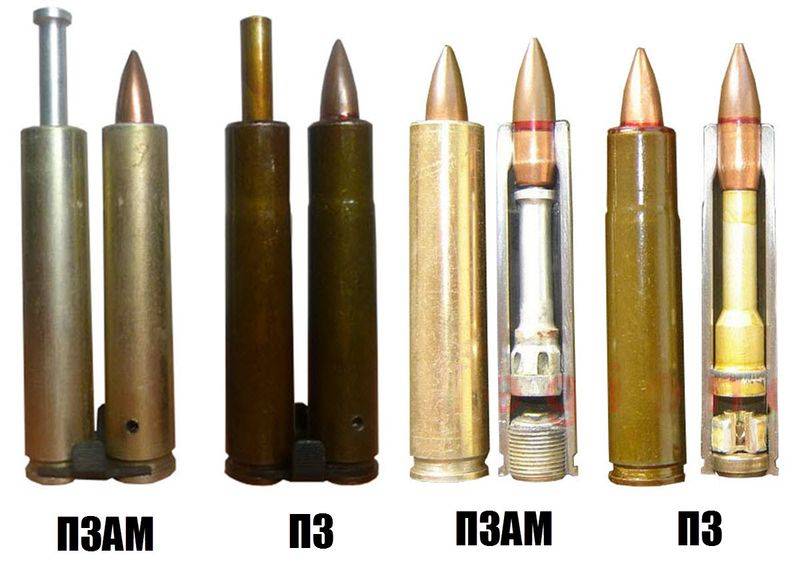 By its design, the S-4M pistol was a non-self-loading sample of small arms with a folding block of two barrels, paired in a vertical plane. To charge and discharge the weapon, the shooter had to use a special form of metal clips that united two cartridges. The pistol was equipped with a firing mechanism with hidden hammers, single action (non-self-cocking). The hammers were cocked in manual mode by pressing the lever located at the base of the pistol grip. In the process of modernization, the weapon received a manual fuse, which was placed on the left above the pistol grip. Behind the trigger, the designers placed a barrel block latch. The pistol used open sights.

The S-4M “Groza” silent pistol was distinguished by the following tactical and technical characteristics. The recommended aiming range of this model did not exceed 10-12 meters. At the same time, the weapon was very compact, the weight of the pistol without cartridges did not exceed 600 grams. The total length was 147 mm, the height was approximately 104 mm, and the width was 27 mm. The practical rate of fire did not exceed 6-8 rounds per minute. This was quite enough, given that the weapon was to be used to solve a very specific task and did not compete with standard small arms systems. The muzzle velocity of the 7.62 mm bullet ranged from 150 to 170 m / s. At the same time, during the tests of the S-4M pistol with the PZA cartridge in 1965, very good penetration results were noted. At a distance of 25 meters, the bullet was guaranteed to pierce a package consisting of two dry pine boards (each 25 mm thick).