Currently, in the interests of the US Army, the Future Long-Range Assault Aircraft (FLRAA) program is being implemented, the goal of which is to create a new high-speed aircraft for the army aviation. Some of the necessary work has already been completed and experimental equipment is being tested. In addition, organizational issues are being addressed.

Requirements for the future

So far, within the framework of FLRAA, only general requirements for advanced technology have been developed and approved, according to which experimental aircraft have already been created. A detailed technical assignment defining the appearance of serial equipment for the army will appear only in the foreseeable future. However, work on its creation is already underway.

In early October, the Army Requirements Oversight Council (AROC) tentatively approved a plan for the development of the FLRAA program for the coming years. In the near future, it was planned to formally formalize all the documents required to continue the work. Then the development of a full-fledged “request for opportunities” will begin, in accordance with which new equipment will be developed for the series and the army.

They plan to form the request before the end of the calendar year. The details of the army’s requirements have not yet been disclosed, but the main approaches have been announced. It is planned to create a transport-combat vehicle with ample opportunities for the transportation of people and the use of weapons, with the emphasis on the latter. Specialists will have to determine the required level of flight performance, the composition of onboard equipment and weapons, etc. 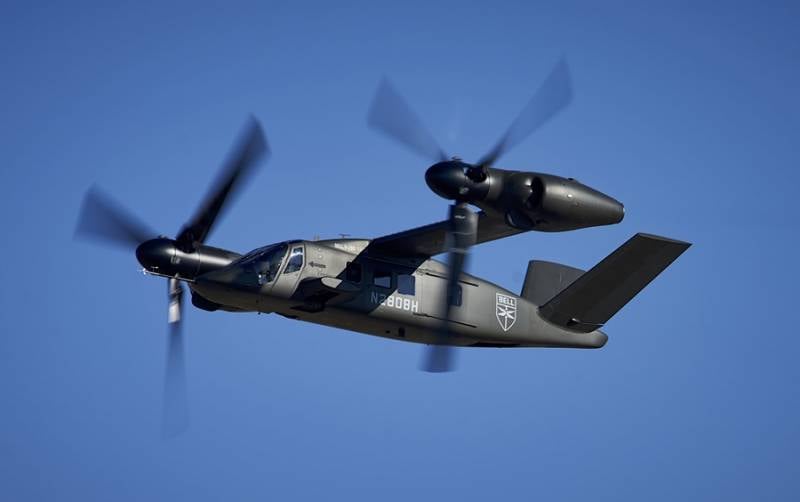 When working out plans and requirements, the Pentagon will have to take into account the existing level of technology development. In this he will be helped by experimental projects recently brought to flight tests. It is expected that the technology demonstrator companies will further take part in the competitive development of a full-fledged combat vehicle.

In parallel with the solution of organizational issues, testing of flight prototypes continues, and news about records appears regularly. Thus, Sikorsky and Boeing continue to fly the SB> 1 Defiant helicopter. The main goal is to gradually increase the level flight speed, reaching the level of 250 knots (463 km / h). Customer requirements for technology demonstrators stipulate a cruising speed of 230 knots (426 km / h).

In June, it was reported that the experienced SB> 1 accelerated to 205 knots (380 km / h). On October 12, a new “record” flight took place. The experimental vehicle developed a speed of 211 knots (391 km / h), and for this only two-thirds of the engine power and thrust of the carrier system were used. Using the full potential of the engine and propellers will provide a further increase in flight performance. However, the exact dates for setting new records have not yet been announced. 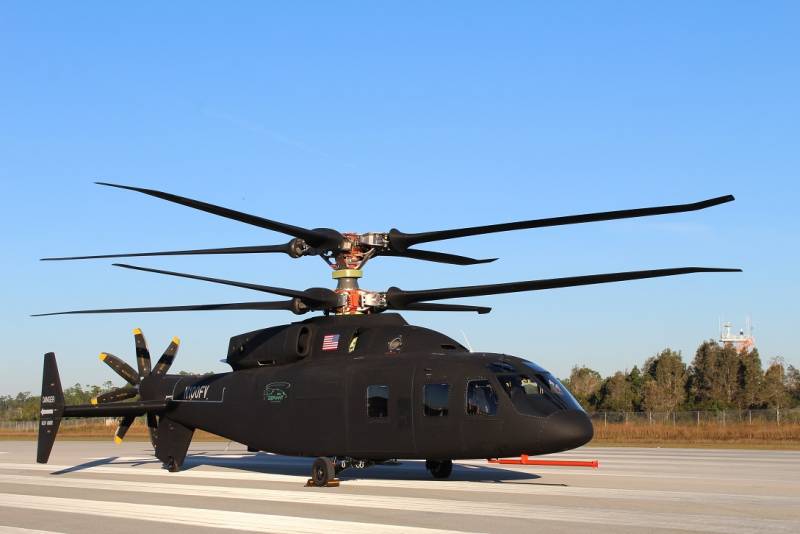 In this case, SB> 1 from Sikorsky and Boeing is in the position of catching up. A competing technology demonstrator, the Bell V-280 Valor tiltrotor, reached a maximum speed of 300 knots (556 km / h) back in March. With a gain in time, Bell can continue to develop the project, gaining certain advantages over a competitor.

Currently, work is being completed on the FATE (Future Affordable Turbine Engine) program, the goal of which is to create technologies for the further development of turboshaft engines. Motors with new components and solutions can be used in modernization projects or in the creation of new aviation equipment, incl. aircraft FLRAA.

On October 13th, General Electric Aviation announced its latest FATE successes. Tests were carried out on two engines of unnamed types, modified with the use of new components. In fact, all the main engine units have undergone an update: the inlet filter, air intake, combustion chamber and turbine. The engines ran for 130 hours on the bench. During the tests, 2,200 different characteristics were measured.

GE Aviation argues that the developed FATE technologies can be used not only when upgrading existing engines, but also when developing completely new ones. Such an engine will be 45% cheaper than the previous generation product in production and operation. The design life will increase by 20%. The increase in the specific power will be 80%, and the specific consumption will decrease by 25%. 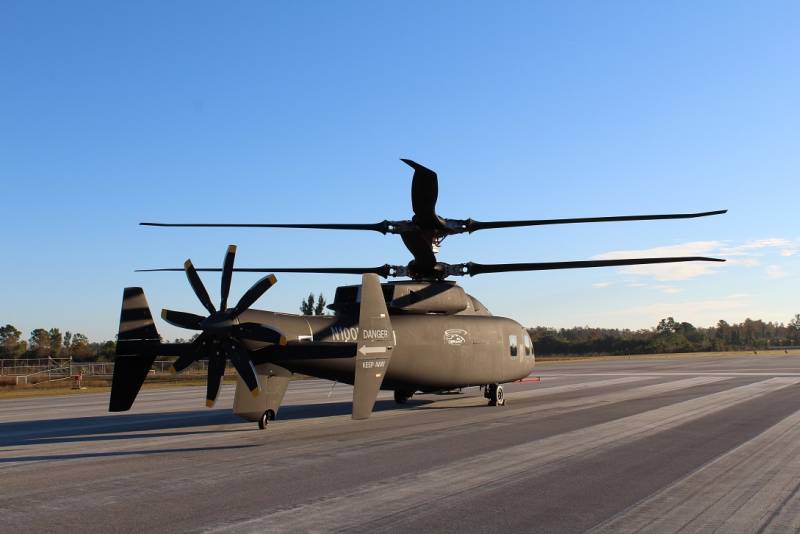 Several modifications of existing engines have already been developed using new technologies. They have been brought to the test and are being prepared for introduction into mass operation. New engine models are also expected to be used in the FLRAA project. With their help, full-fledged transport and combat vehicles will be able to combine the flight data of experimental samples with the required load, etc.

Waiting for the competition

Existing projects and aircraft demonstrators of technologies made it possible to work out the main issues of creating promising aviation technology and find the necessary solutions. Now the Pentagon must work out the final version of the tactical and technical requirements, after which it will announce a competition for development.

The RFP, which will start the competitive development, is expected in the first half of 2021. It is assumed that companies already involved in the FLRAA program will participate in it, but the possibility of other organizations joining is not excluded. Comparison of projects, selection of a winner, and contract signing will take place in FY2022. – after October 2021 calendar year.

This will be followed by the development of a technical design and the construction of experimental aircraft. Flight tests are planned to begin in the spring or summer of 2026. No later than 2028, it is planned to start mass production. The first FLRAA aircraft unit will reach initial operational readiness in 2030.

The FLRAA program is part of the larger Future Vertical Lift (FVL). The goal of FVL is to develop fundamentally new types of aviation technology, showing significant advantages over existing ones. Serial helicopters and / or converters of new types should appear in 2028-30. and then replace the existing helicopter technology in the Air Force and Marine Corps. 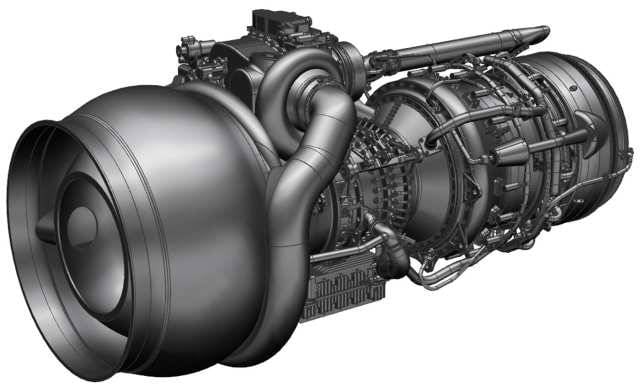 At the expense of FLRAA, it is planned to replace the aging UH-60 helicopters that have been in service for more than 40 years. At the moment, only in the army aviation there are more than 2,100 such helicopters in various modifications, and a comparable amount of new equipment is required to replace them. Thus, the winner of the competition will receive large and lucrative contracts.

By now, FVL and FLRAA have passed the early stages and are preparing to move to new stages. Flight prototypes have been developed and tested, and various systems and units are being created in parallel. In the coming years, experimental vehicles of new models will appear, and then they will choose equipment for the supply of the army.

In general, the situation in both programs looks good and is conducive to optimistic forecasts. However, the implementation of existing plans to replace obsolete helicopters will be quite long and expensive. Time will show whether it will be possible to complete the work by 2030 and keep the cost of the program within reasonable limits.