One of the first ACS 2S35 on Red Square. Photo by AP RF / kremlin.ru

Work continues on the 2S35 “Coalition-SV” 152-mm interspecific artillery system and its modifications on a wheeled chassis. In recent days, there has been a whole series of news about work on these samples. The main one is the transfer of the first batch of tracked self-propelled guns to the armed forces. Now all the necessary tests are expected to be completed with subsequent acceptance into service.

The first delivery of the finished batch of the Coalition-SV self-propelled guns to the armed forces became known on May 22, the TASS news agency reported about it with reference to the press service of the Rostec state corporation. The news did without the most interesting details, but Rostec noted that the promising artillery complex surpasses domestic and foreign models in terms of basic tactical and technical characteristics.

On May 26, the news about the delivery of the 2S35 ACS was confirmed by the Ministry of Defense, represented by the press service of the Central Military District. It is reported that the industry has transferred eight artillery systems to the Central Military District. In the near future, this technique will be transferred to the troops for development. The machines were built by the Uraltransmash plant, which is part of the Uralvagonzavod NPK.

Apparently, we are talking about the first experimental-industrial batch of self-propelled guns, built at the end of last year. In the near future it was planned to transfer it to the troops for a new stage of testing. In addition, several “Coalitions-SV” were transferred to Alabino to participate in the future parade. It should be noted that along with the ACS itself, transport-loading vehicles, various equipment for maintenance, etc., should go to the troops.

Also on May 26, the Zvezda TV channel showed curious footage from the ongoing tests of the 2S35-1 Coalition-SV-KSh artillery complex on a wheeled chassis. In addition, they cited data from the Central Research Institute “Burevestnik”, which developed such a combat vehicle. The representative of the institute recalled the main advantages of the proposed project. 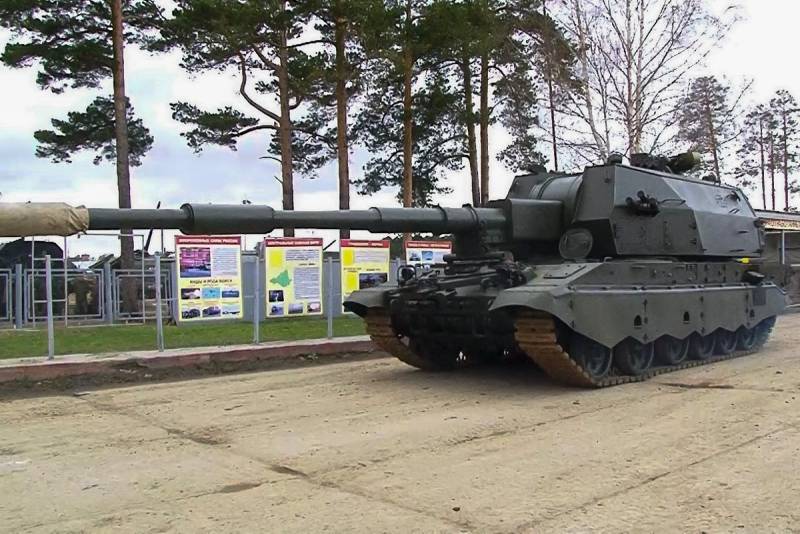 Machine of the first series recently transferred to the Central Military District. Photo by the Ministry of Defense of the Russian Federation / mil.ru

A small series of wheeled self-propelled guns has been manufactured, which is now used in tests. These measures are planned to be completed by the end of the year, after which the issue of acceptance into service will be decided. Other details of the work have not yet been reported.

It is noted that the wheeled self-propelled gun differs from the caterpillar in greater simplicity, can be used on general-purpose roads, shows better mobility and has an increased resource. In addition, the combat mass has been reduced, making it easier to airlift. As a result, the wheeled version of the “Coalition-SV” turns out to be a convenient tool that can supplement or even replace the basic wheeled modification.

On May 27, Techmash Corporation disclosed some details of the development and production of ammunition for new self-propelled guns. NIMI them. Bakhireva, a member of Tekhmash, has already begun testing several shells and propelling charges considered as standard for the 2A88 howitzer. By the end of the current half-year it is planned to receive the letter “O” – the project is entering the stage of serial production.

The issue of acceptance into service will be decided based on the results of state tests. This stage will end in 2021-22. After that, the standard ammunition for the new howitzer will go to the troops.

According to known data, the first prototypes of the ACS 2S35 were built in 2013 at the Uraltransmash plant and then went out for testing. In 2014, a batch of 10 armored vehicles was manufactured. A few months later, their first public demonstration took place as part of the parade on Red Square. In the future, it was repeatedly reported about the imminent start of deliveries of pre-production or serial equipment to the troops. 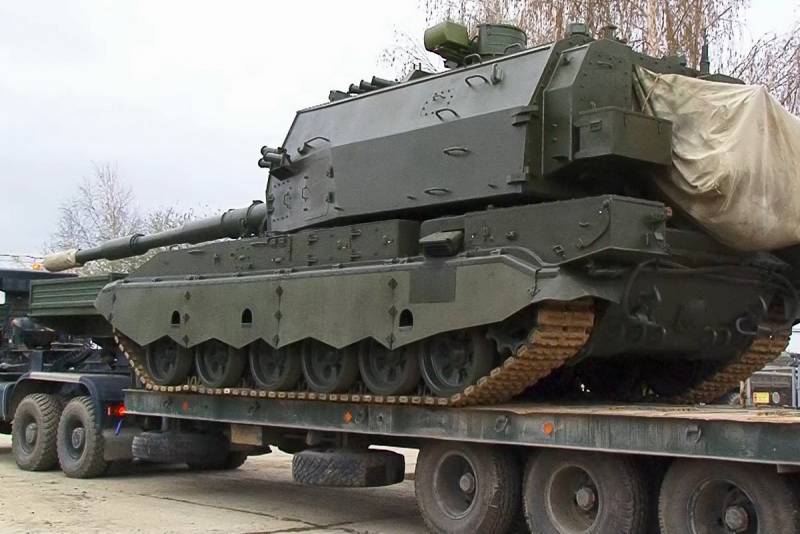 Transportation of equipment. Photo by the Ministry of Defense of the Russian Federation / mil.ru

At the end of last year, the manufacturer announced the completion of the assembly of a pilot industrial batch of equipment and its readiness to transfer it to the troops. Then it was said about the presence of 10 self-propelled guns, which should be delivered to the parts of the Western Military District. Now it became known about the transfer of 8 vehicles to the units of the Central Military District.

Thus, to date, at least 18-20 tracked self-propelled guns of a new type, belonging to different parties, have been built. It can be assumed that the newest machines, recently handed over to the troops, have the final serial appearance. Accordingly, all new samples of the full-fledged series will be similar to them.

There are no exact data on the production of 2S35-1 wheel complexes yet. It is known that the first prototypes of this kind appeared several years ago and are being tested. Now we are talking about a small series of unknown volumes. Perhaps more accurate data will appear in the near future.

Artillery complex “Coalition-SV” was created in response to advanced foreign systems, characterized by high range and accuracy of fire. With this in mind, in the new domestic project, the most modern components and solutions were used, allowing to obtain a favorable combination of combat and operational characteristics. 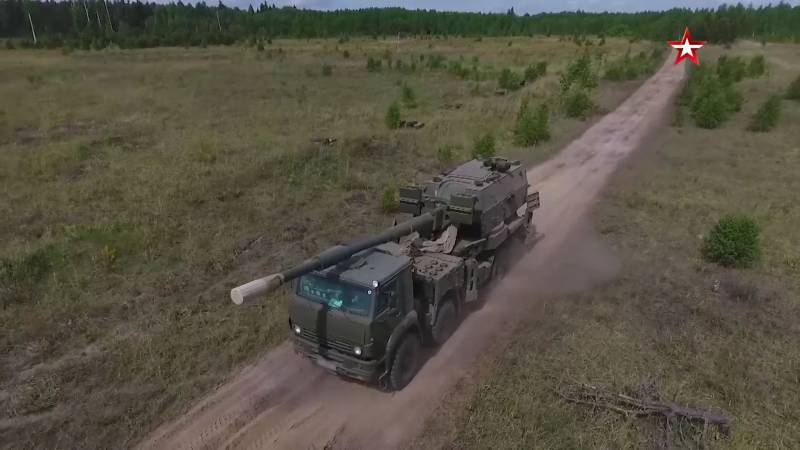 Wheeled self-propelled guns “Coalition-SV-KSH” on the track. Shot from the reportage of TK “Zvezda”

The tracked version of the 2S35 is based on the modified chassis of the T-90 main tank. The vehicle with a combat weight of 48 tons remains mobile at the level of the tank. The workplaces of all three crew members are located inside the hull; the fighting compartment is completely uninhabited and works automatically at the command of the crew.

“Coalition-SV-KSH” is carried out on a four-axle chassis “KamAZ-6550”. The vehicle chassis receives a platform with an artillery turret seat, hydraulic outriggers and other equipment. The crew and fire controls are in the cockpit; basic operations are performed without going outside.

Both versions of the artillery complex have a unified fighting compartment, made in the form of a large fully revolving turret. The main weapon of the self-propelled guns is a 152-mm rifled howitzer 2A88. It is equipped with a muzzle brake, ejector and advanced recoil devices. Separate shots of a modular type are used, sent to the chamber by automatic equipment. Transportable ammunition – 70 rounds with shells of all available types. The use of guided ammunition with increased range and firing accuracy is possible.

Additional armament includes a remotely controlled combat module 6S21 with a large-caliber machine gun and the Tucha system. These systems are managed without leaving the protected area. 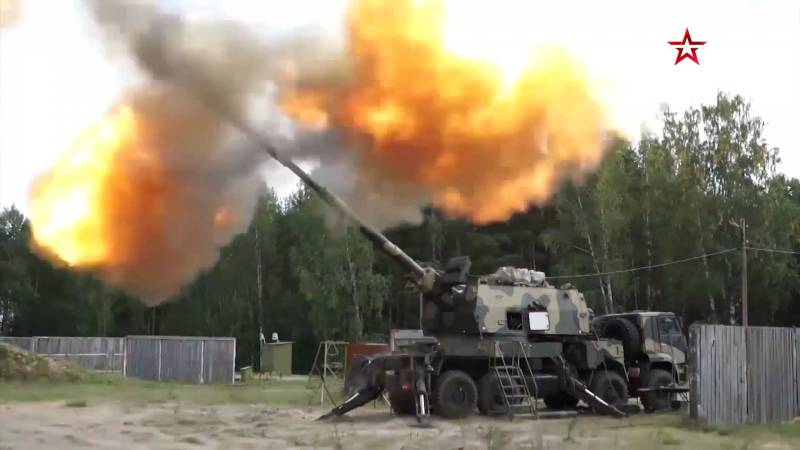 Test firing. Shot from the reportage of TK “Zvezda”

The 2S35 is fully integrated into the Unified Tactical Management System and can receive target data from various sources. The information received is processed by the onboard unified information command system, followed by the issuance of data for firing and ammunition control. According to open sources, the maximum firing range has been increased to 70 km. The use of guided projectiles allows for high accuracy. Automation provides a rate of fire up to 10 rds / min.

Thus, in terms of the main fire characteristics, “Coalition-SV” surpasses all serial self-propelled guns of domestic and foreign production. So far, only a few foreign prototypes can be compared with it.

Both versions of the 2S35 complex have been tested and brought to production in small batches. The main tracked modification has already hit the troops, while the wheeled one is still at the stage of checks, which will be completed before the end of the year. Thus, over the next few years, having received a corresponding order from the army, the industry will be able to deploy a full-scale series.

The positive consequences of this are obvious. The basic version of the “Coalition-SV” will be an excellent addition to the existing self-propelled guns of old models. With similar mobility, the 2S35 self-propelled guns will be able to fire further and more accurately, as well as work more efficiently in the existing control loops, which will give the troops clear advantages. 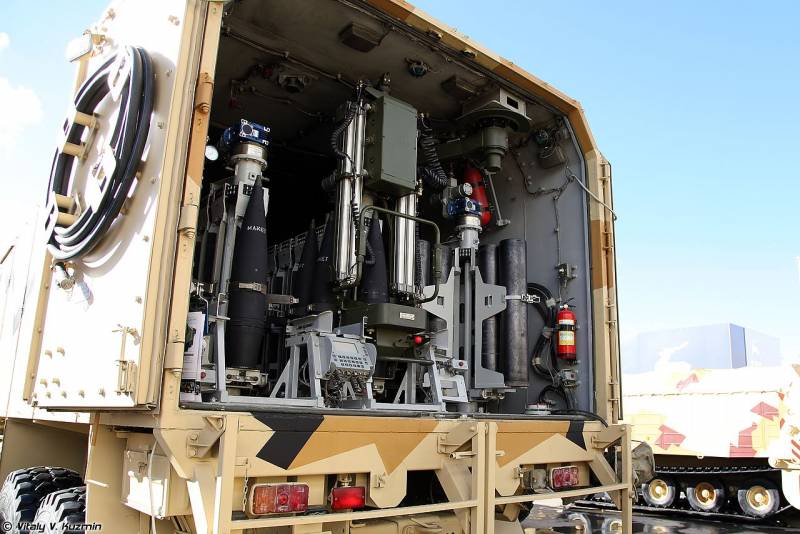 Internal equipment of the transport = loading vehicle from the “Coalition-SV” complex. Photo Vitalykuzmin.net

The appearance in the troops of the wheeled self-propelled guns “Coalition-SV-KSH” will be a very interesting event, since at the moment we do not have such samples. This technique, as shown by tests, combines high combat qualities and improved mobility characteristics. At the same time, there will be an opportunity to choose – the execution of the firing mission can be entrusted to complexes that are better adapted to specific current conditions.

There is information about the development of the ship version of the “Coalition-SV”. In this case, all the characteristic capabilities of the land system will be transferred to the offshore platform. However, this version of the artillery complex. as far as we know, not even ready for testing yet.

What is happening now is exactly what has been expected for the past few years. After completing a number of necessary stages and measures, the “Coalition-SV” ACS enters the troops. The first batch of eight cars in the future will be followed by new ones, incl. larger ones. You should also expect the imminent arrival of similar vehicles on a wheeled chassis. The ship’s artillery will be the last to appear.

In general, in recent days there has been more than just news about the supply of certain types of military equipment. We are talking about the most important event in the modern history of Russian self-propelled artillery – a fundamentally new model with the highest capabilities reached the troops. It remains to be hoped that the subsequent program of production and development will not face any difficulties, and the Ministry of Defense will be able to regularly delight the public with new messages about the “Coalition-SV”.