In Klimovsk, which today is a microdistrict of Podolsk in the Moscow region, the famous enterprise TsNIITOCHMASH is located. The Central Research Institute of Precision Engineering is part of the Rostec State Corporation and specializes in the development and production of small arms and ammunition for them. For example, it was here that the 9-mm silent automatic machine AS Val, the 9-mm pistol “Boa”, a special machine gun for underwater shooting APS and other samples of small arms were created.

Currently, the company continues to work on the creation of new types of weapons, including those for training shooting. In 2020, the institute began work on a new marker pistol complex, which, in addition to the pistol itself, will also include a specially created cartridge. It is known that the new development of the Klimovsk gunsmiths is a further development of the existing modular shooting system, which is called the “snake” line at the enterprise itself. The ancestor of this line of short-barreled weapons at one time was the self-loading 9-mm army pistol 6P72, created as part of the development work on the “Boa constrictor” theme.

The appearance of the first marker cartridges

The problem of training personnel to effectively shoot small arms, as well as training tactical shooting skills, began to be addressed in the second half of the 19th century. By that time, hand-held firearms had become a mass weapon of all armies. In addition to the effectiveness of the learning process, the emphasis was immediately on saving money. They tried to simplify the process of training and education of shooters by creating a variety of training ammunition. In the 20th century, training in practical shooting skills became even more accessible, including through training civilians.

A new milestone in the field of training shooting was the creation of marker cartridges. Such a practical cartridge was developed in the late 1980s by the joint efforts of the American company General Dynamics Ordnance and the Canadian company Tactical Systems. The fact that the cartridge was developed precisely in the United States, where small arms are widely available, is not surprising. The second amendment to the US Constitution provides citizens of the country with the right to possess and carry weapons. The amendment was adopted on December 15, 1791 and is still in effect. 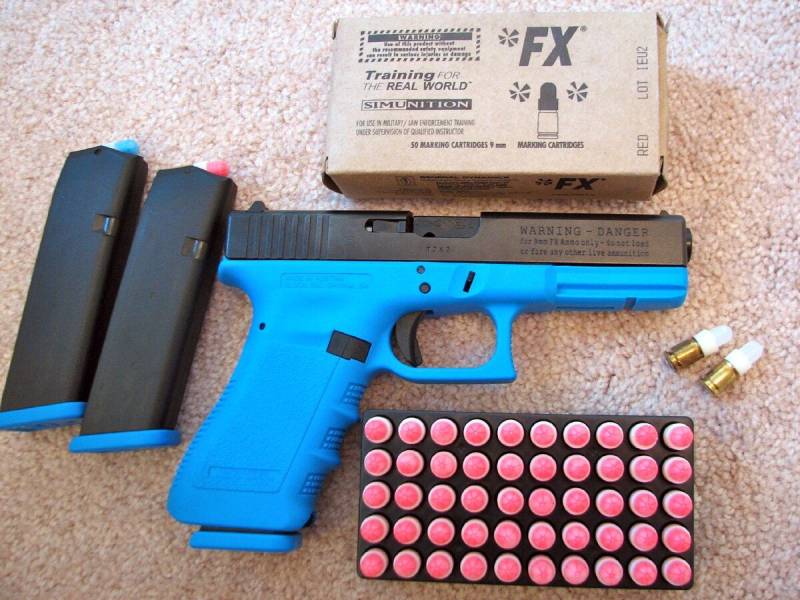 The new marker cartridge, created by the US and Canadian companies, was primarily intended for more realistic practical training for security forces. But then he found application in the civilian market. Inside the plastic bullets of the new marker ammunition, there was a coloring compound, which made the weapon akin to a paintball gun. In practical terms, it was a serious step forward. The use of such ammunition allowed the security forces to conduct team training, as close as possible to combat. At the same time, the fighters were not injured, and the results of successful hits were easily read.

An important advantage of the created ammunition was that they were compatible with standard systems of small arms, which, with the help of special replaceable elements, were temporarily transformed into training ones. All this together formed a comprehensive educational and training approach suitable for both the military and law enforcement officers. The use of such cartridges with standard weapons increased the realism of the training process compared to the use of paintball markers or airsoft weapons. The unified training complex was named Simunition, and it is supplied under this brand today. The complex includes NATO-caliber FX marker cartridges in the version 9 mm (chambered for 9×19 mm) and 5.56 mm FX (for assault rifles), as well as special application and training methods, replaceable weapon elements and special protective uniforms.

The marker pistol complex, developed by TsNIITOCHMASH specialists, is intended for conducting trainings to increase the level of fire and tactical-special training of employees of various Russian law enforcement agencies, as well as for recreational and competitive shooting of civilians and holding competitions,

– reports the official publication of the enterprise “Klimovsky gunsmith”. As part of the work on the R&D “Marker” specialists of the Institute in Klimovsk are developing a marker complex from a self-loading marker pistol and marker cartridges for it.

According to the assignment for development, the main units and parts of the pistol should be unified with the pistols already created at TsNIItochmash. In particular, with the army 9-mm pistol 6P72 “Udav” chambered for 9×21 mm, as well as with a compact version of the army pistol “Udav” intended for employees of the Ministry of Internal Affairs and the National Guard – the self-loading pistol “Poloz” chambered for 9×19 mm. Also in this line are sports pistols RG-120 and RG-120-1, created within the framework of the ROC “Aspid”. All these weapons have already been demonstrated at the Army International Military Forum, including in 2020. 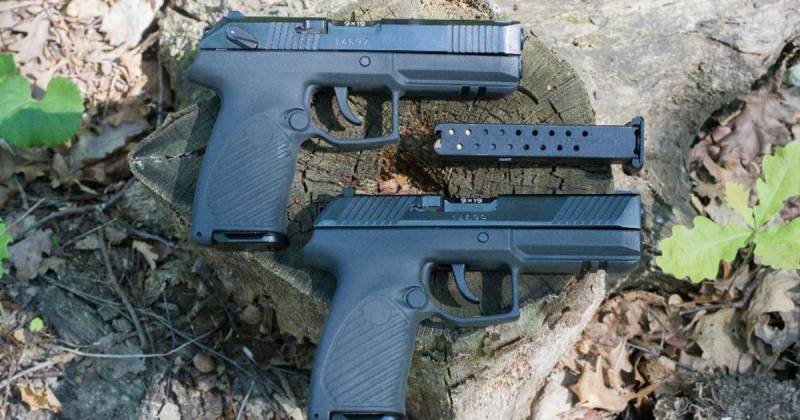 The appearance of the Marker pistol is similar to all pistols of the above line. The new model is similar to the existing combat models of small arms, but, like its Western counterparts, it stands out for its striking distinctive color on the barrel and bolt. The sample presented at the Army 2020 forum was bright blue. The bright color makes it possible to quickly and unambiguously identify the training weapon in the model. At the same time, all the main ergonomic characteristics of the “Marker”, as well as the technical aesthetics of the training pistol, are not worse than the characteristics of the sports pistols “Aspid”.

The pistol developed at TsNIITOCHMASH should be simple, reliable and convenient in operation and maintenance. The declared firing range for the “Marker” should be at least 10 meters, the operating temperature – from -5 to +30 degrees Celsius. Different sources provide different information regarding the model resource. The range of values ​​is at least 2-4 thousand shots, and much higher values ​​are also encountered. According to VTS “Bastion”, the length of the pistol will be 206 mm, weight without cartridges – 0.78 kg, magazine capacity – 18 cartridges.

The company emphasizes that the pistol is being developed taking into account high requirements for operational safety. The design of units and parts of the “Marker” should exclude the possibility of using combat barrels with a pistol, as well as the possibility of firing with the use of civilian and live ammunition of small arms. It is also noted that it will be impossible to fire a pistol with an unlocked bore; a shot when a loaded weapon falls to the ground / floor; a shot from the inertial glow of the primer-igniter when manually reloading the weapon; a shot from spontaneous ignition of a cartridge from heating a pistol during firing. Also, the developers took care of eliminating the likelihood of injury to the shooter when firing, including reflected spent cartridges or moving parts of the weapon.

Marker cartridges are created especially for the Marker pistol. According to the press service of the developer, the length of the cartridge and the diameter of the flange of the sleeve of Russian ammunition should be unified with the 9×19 mm Luger combat pistol cartridge, which is widespread throughout the world, and the Canadian Simunition FX marking cartridge 9×19 mm. It is noted that the new marker cartridge will be used in the training process and will not be able to harm human health if he uses the necessary protective equipment. 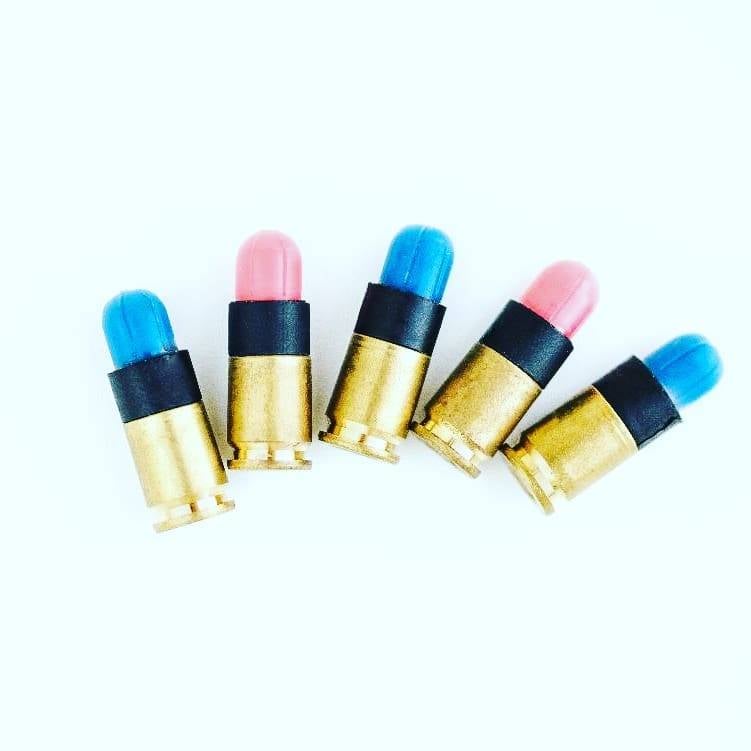 It should be noted that TsNIITOCHMASH already has experience in creating marker ammunition. Earlier, through the efforts of the Institute’s specialists, training and practical cartridges with a marking component for a standard weapon – the Yarygin pistol (PY) – were created and are being produced. These cartridges leave a clearly visible mark when the bullet meets various obstacles. They are already being used by employees of special forces to conduct practical exercises to improve special tactical and fire training using standard pistols.

The new marker cartridge, which is created within the framework of the ROC “Marker”, should provide an effective aiming range with the effect of staining the point of impact – up to 10 meters. At the same time, the minimum permissible firing range is also indicated – 2 meters. It is noted that the specific energy of the bullet of the marking cartridge should not exceed 0.5 J / mm2 over the entire range of use of the training weapon. This value was not chosen by chance.

In forensic science, it is considered the minimum value of the specific kinetic energy, which corresponds to the border of human damage. Bullets “Marker” should not cause a person serious harm to health. Provided that he will wear mandatory protection of the most injured parts of the body, as well as pain points.

It is reported that the bullets for the “Marker” will contain a marking composition of three primary colors: blue, red and yellow. Traces of such ammunition can be removed without any problems with ordinary detergents.