Glider A-7 designed by O.K. Antonova is one of the main machines of its class. Photo Airwar.ru

During the Second World War, a number of countries were armed with transport and landing gliders. Such equipment, distinguished by its low cost and ease of production and operation, could transport people and goods, provide logistics or carry out a landing. The Red Army had several types of gliders with different characteristics and used them quite actively almost throughout the war.

In the twenties of the last century, gliding gained popularity in our country, at the same time the study of the issues of the military use of gliders began. However, real work on airborne transport gliders started only in 1930. The first period of development lasted until the mid-thirties and did not give much results. Early transport gliders were not mainstream and were not used by the army.

Work on this topic resumed at the end of the decade, the reason for this was foreign developments. In 1939, Osoaviakhim announced its competition for the development of the airframe, and in 1940 – the newly created Directorate for the production of airborne transport gliders from the People’s Commissariat of the Aviation Industry.

Several design teams took part in two competitions. Several projects were awarded prizes and allowed to build experimental equipment. The most successful in all respects turned out to be the Rot Front-8 glider designed by O.K. Antonov. Later this project was improved, and the resulting A-7 glider went into series. Other projects have not progressed beyond prototype testing. 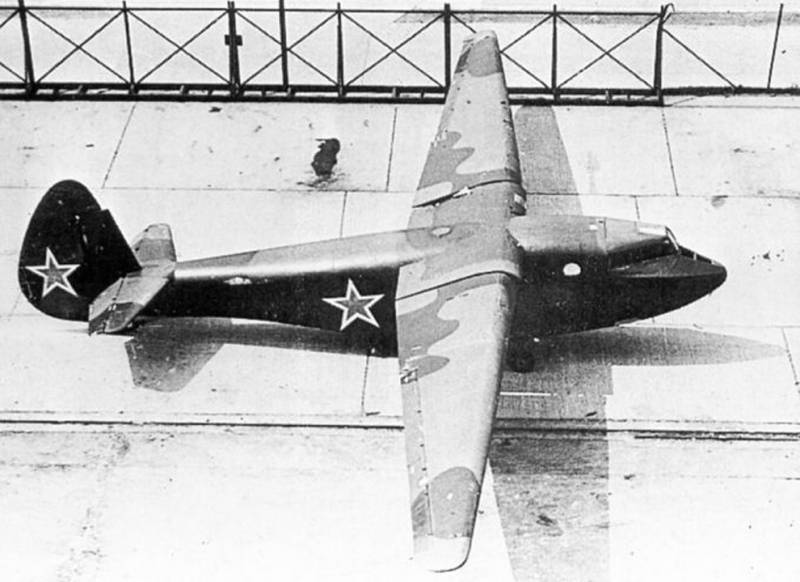 The design of the A-7 was distinguished by maximum simplicity and manufacturability. Photo Aviaru.rf

In November 1940, new staffs of the airborne brigades were introduced. They provided for parachute landing, landing from aircraft and with the help of gliders. Accordingly, the army needed new types of equipment. Later, a Military Aviation Glider School was opened in Saratov, which was to train glider pilots.

The beginning of the Great Patriotic War spurred work on the glider direction. Various versions of equipment were proposed for transporting people and various goods, up to artillery pieces and light vehicles. More ambitious projects were also proposed, such as a set of planes for a light tank or a glider-fuel carrier capable of transferring fuel to a towing bomber and increasing its range. However, not all new developments reached the series and were built in significant quantities.

In September 1941, the A-7 glider, based on the older RF-8, took off for the first time. It was a solid wood vehicle with a maximum take-off weight of less than 1900 kg. She was operated by one pilot and carried six paratroopers. Production was deployed at several factories and continued until 1944. In total, the Red Army received at least 400 A-7 products (according to other sources, up to 600). Specialized modifications with special capabilities were created.

The glider G-11 (aka Gr-29) designed by V.K. Gribovsky, created for the 1940 competition. With a normal flight weight of 2.4 tons, such a glider carried 10 paratroopers and one pilot. Tests of the G-11 were carried out at the beginning of the fall of 1941, and in November they had already mastered the serial production. By the end of the year, the army had transferred 10 gliders. In 1944, a training modification of the G-11U with dual control appeared. The production of the G-11 gliders ended in mid-1945. For all the time we made approx. 500 units.

Landing of paratroopers in A-7. Photo Aviaru.rf

Immediately after the start of the war, D.N. Kolesnikov and P.V. Tsybin developed a project for a heavy airframe KC (later there were options for KC-2 and KC-20). The maximum take-off weight of the KTs-20 exceeded 4.4 tons. The vehicle was operated by two pilots and could carry 18 paratroopers or a comparable cargo. The production of the KC series was completed at the end of 1943. According to various sources, from 50 to 68 gliders were built.

Deliveries of serial gliders to the Red Army began in the last months of 1941. The equipment entered the Airborne Forces brigades and was initially used as transport for transportation in the rear. Its small number so far ruled out full-fledged combat use in airborne operations. This state of affairs continued until the spring of 1942.

In February and March 1942, several A-7 and G-11 gliders, as well as towing aircraft R-6, PS-84, SB and DB-3F, were transferred to the Strygino airfield (Gorky region). Soon an order was issued on the formation of the 1st separate air-glider regiment (1st oapp), subordinate directly to the command of the Airborne Forces. The regiment consisted of two squadrons, in which there were 10 tugs and 60 gliders.

In August of the same year, the 2nd training air-glider regiment was formed in the city of Kirzhach (Ivanovo region) (a year later it was renamed into the 2nd separate air-glider regiment). At his disposal were the DB-3F / Il-4 aircraft, as well as the G-11 and A-7 gliders.

In the future, new glider units were not formed. To solve the assigned tasks in the interests of the army and other formations, such a grouping was quite enough. At different times, the two regiments transported various cargoes in the rear and behind the front line, and also ensured the landing of troops.

In the summer of 1942, the pilots of the 1st regiment were attracted to supply the partisan detachments of the Bryansk region. With the help of gliders, various cargoes and specialists were delivered to remote areas. However, such sorties were carried out not too often and without any clear-cut system.

In November of the same year, two glider regiments became the main participants in Operation Antifreeze. At the beginning of the month in the Stalingrad region it became sharply cold. The equipment of the Red Army was not ready for frost and needed large quantities of antifreeze – in the shortest possible time. The necessary resources were available in the Moscow region, but there were difficulties with the transfer. The railway and military transport aviation could not cope with the task in a reasonable time.

The command of the Airborne Forces proposed to organize the supply of troops using gliders. On November 10, two regiments raised the alert and began preparations for flights. On the evening of November 12, the first flights took place. The tugs with loaded gliders took off from the Medvezhye Ozera airfield (Moscow region) and with several intermediate landings reached the Stalingrad region. The flight took up to 8-9 hours and often took place in difficult weather conditions. 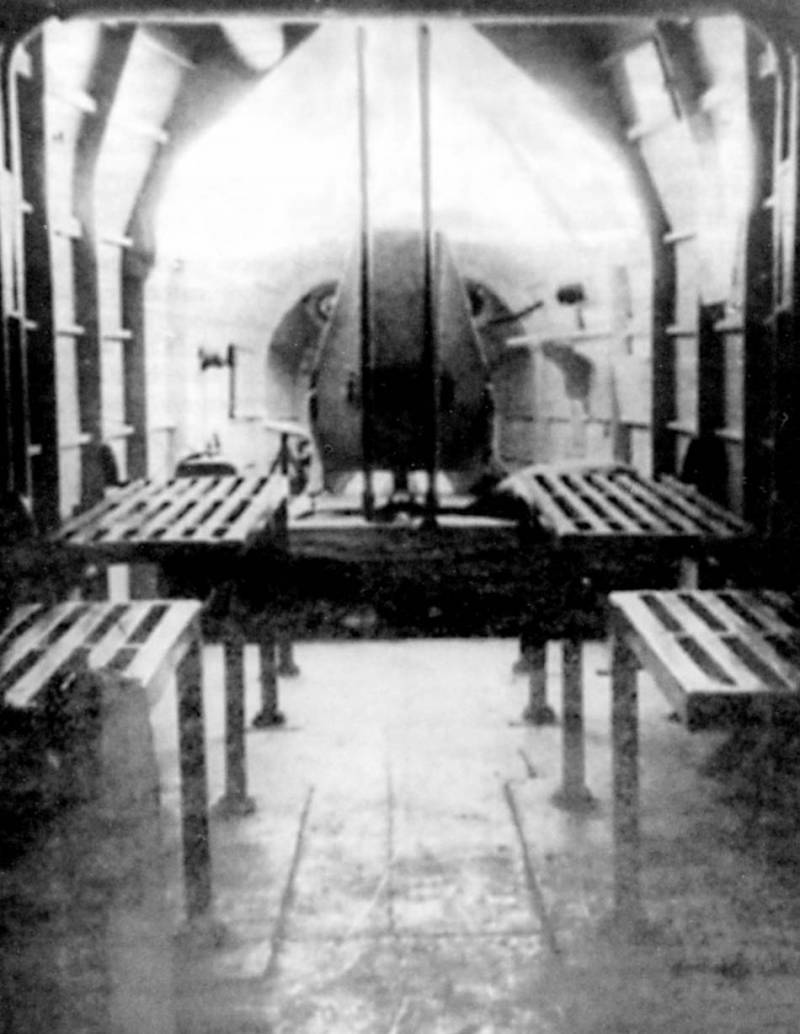 G-11 cockpit, forward view. In the background you can see the pilot’s seat, near the sides – landing shops. Photo Airwar.ru

In Operation Antifreeze, the G-11 and A-7 gliders were used. Larger G-11s took on board six 200-liter barrels of antifreeze, light A-7s – half as much. Until November 16, inclusive, the glider regiments performed 60 flights and transported approx. 50 tons of liquids and other cargo. During the operation, they lost 3 towing vehicles and 10 gliders. Several pilots were killed. At the cost of such losses, it was possible to ensure the supply of the active army with the necessary resources. Subsequent events at Stalingrad showed the importance of the operation.

At the turn of 1942-43. gliders were again involved in supplying troops in the Stalingrad region. In the spring, attempts were made to use gliders in the area of ​​besieged Leningrad.

From March 1943, the main work of the two glider regiments was the supply of partisan detachments, mainly on the territory of Belarus. The flights were carried out at night, the partisans organized and marked the landing sites. After landing and unloading, the fate of the glider directly depended on the characteristics of the field “airfield”. If the site allowed a towing aircraft to land, the glider could be taken out along with the wounded or any cargo. Otherwise, the glider was disassembled for materials or simply burned.

In just two weeks in March 1943, the forces of the 2nd military unit brought 140 specialists and leaders, 3 tons of medicines, 4 tons of explosives, thousands of small arms and various ammunition to the partisans of the Selyavshchina and Begoml regions. In 60 sorties, we lost 65 gliders (mainly due to the impossibility of returning). Almost all the pilots were successfully returned to the mainland. 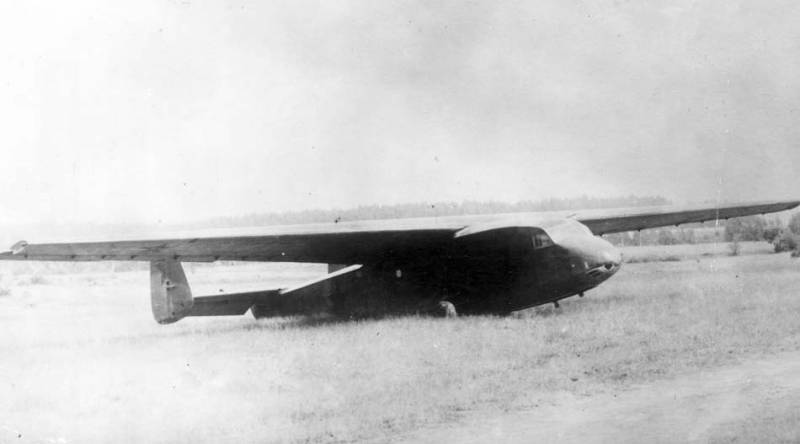 A new operation to supply the partisans began at the end of April 1943 and lasted for almost a year. During this time, partisan detachments received 135 gliders of all basic types with all the necessary cargo. At the same time, the glider regiments encountered opposition from the enemy. The Luftwaffe tried to intercept air transport or track it in search of partisan bases.

Landing gliders were regularly used to deliver sabotage and reconnaissance groups to the rear of the enemy. However, they only once participated in a full-scale airborne operation. Gliders, along with other equipment, were used for the landing of tactical troops on the right bank of the river. Dnieper 24-25 September 1943

For the landing, 180 military transport aircraft of various types were involved in the operation. 1 st and 2 nd oapp provided a total of 35 gliders A-7 and G-11. At first, some of the gliders were used for the landing of the fighters. In the future, this technique was used for the delivery of medicines and ammunition, the evacuation of the wounded, etc. The operation was generally unsuccessful, but the gliders reaffirmed their potential – which could be realized if used correctly.

In April 1944, the pilots of the 1st regiment made the last flight to supply Belarusian partisans. After that, such flights were not performed. In fact, combat operations with the use of gliders have ended.

In June, the 1st oapp was taken to the town of Klin. In the fall, the glider regiment was reorganized into the 208th Guards Long-Range Aviation Regiment (208th Guards Airborne Division) and transferred to Il-4 bombers. The 2nd oapp in the same period became the 209th guards. update. The gliders were written off after the development of the resource, and their pilots were distributed among the flight schools of initial training. 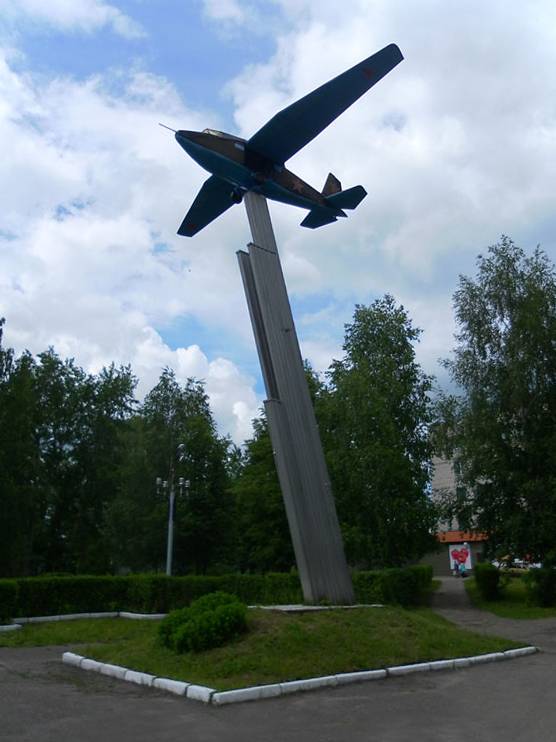 Glider G-11 as a monument in the city of Shumerlya. Photo Wikimedia Commons

At the beginning of 1945, some of the experienced pilots were transferred to the newly created 45th training aircraft regiment (45th utapp). The task of this part was to preserve experience and master new designs in order to further train pilots.

Soviet transport gliders were originally created in the interests of the Airborne Forces for landing operations. However, for their intended purpose, they were used only once. The rest of the time, two glider regiments solved transport tasks in the rear or helped the partisans.

During the war years, more than a thousand gliders of several basic types were built. Having lost a significant part of this equipment, they managed to transport hundreds of tons of various cargoes to supply the active army and partisan detachments, as well as ensure the work of dozens of reconnaissance groups.

After the Great Patriotic War, the development of transport gliders continued, but did not give noticeable results. New models of military transport aviation appeared, which had obvious advantages, and gliders turned out to be unnecessary.