UAV D-21 on a transport trolley. Photo by US Air Force

In 1969, the Central Intelligence Agency and the United States Air Force began operating the latest unmanned reconnaissance aircraft, the Lockheed D-21. The use of such an aircraft turned out to be overly complicated and did not guarantee the desired result. Because of this, already in 1971, flights stopped – only after the fourth launch. However, by this time, the probable opponents in the face of the USSR and the PRC had managed to learn about the new American technology and even study it.

Development of the future D-21 started in the early sixties and took several years. The timing was influenced by the specific requirements of the customer and the overall complexity of the project. In addition, at a certain stage, it was necessary to change the carrier and recycle the UAV. Flight tests began in 1964, and by the end of the decade the product went into a small series.

On November 9, 1969, as part of Operation Senior Bowl, the first combat sortie took place. The B-52H bomber delivered the UAV to the drop zone and sent it on an independent flight. D-21B was supposed to fly over the Chinese training ground Lop Nor, take a survey and turn towards the ocean, where a container with films should be dropped. However, a failure occurred in the on-board equipment, and the UAV did not turn.

After running out of fuel, he made an abnormal, but successful landing on the territory of the Kazakh SSR. Soon, the drone was discovered and sent to the aviation industry for study. The CIA learned the true fate of their UAV only a few decades later. 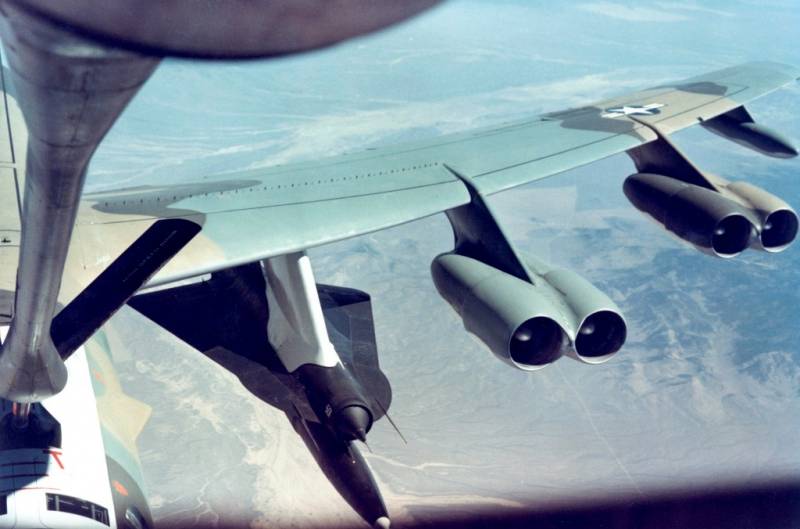 Aircraft D-21B with a launch booster under the wing of a B-52 bomber. Photo by US Air Force

The second and third D-21Bs managed to navigate the route, but no intelligence was obtained. On March 20, 1971, the fourth flight took place, which ended in an accident. For some unknown reason, the drone fell in the Chinese province of Yunnan, it was found and taken out for study. A few months later, the Senior Bowl operation was stopped.

The first D-21B used accidentally went to Soviet specialists. The car had no identification marks, but its appearance and technical capabilities indicated a probable origin. Since the actual designation of the product remained unknown, the nickname “Black Cat” was stuck to it.

The damaged UAV was taken out of Kazakhstan and taken to the Air Force Research Institute. Then, individual components and assemblies were transferred to specialized enterprises of the aviation industry – Tupolev Design Bureau, OKB-670, etc. They had to study a foreign novelty and draw conclusions, incl. in the context of copying it or creating a similar drone. For several months, Soviet specialists established the general features of the “Black Cat”, and also identified approximate tactical and technical characteristics.

During the study, special attention was paid to the airframe design: materials, manufacturing technologies, layout and other solutions. The design of the ramjet engine and the cooling means, which made it possible to reduce thermal loads, aroused great interest. It was not possible to study the target equipment normally, since a self-liquidator worked in the compartment. 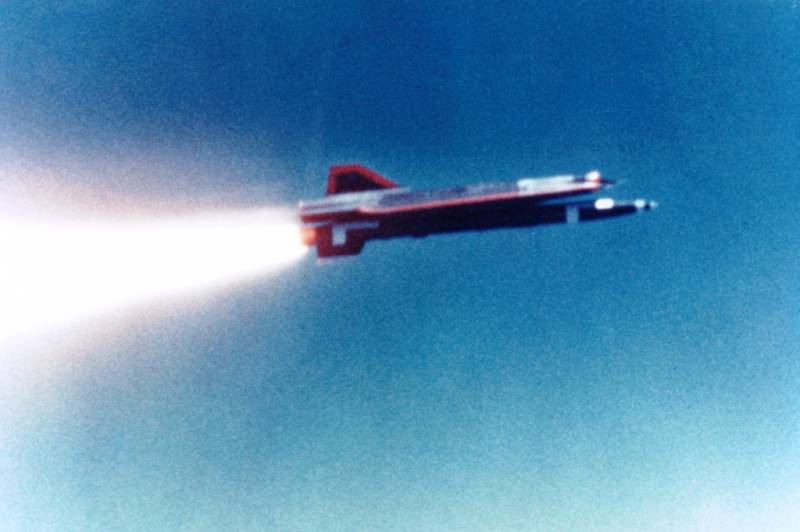 Flight of a drone using an accelerator. Photo by US Air Force

During the study of the D-21B, it was found that the Soviet industry is quite capable of copying and manufacturing a similar design, or creating its direct analogue using the same or similar materials and technologies. Moreover, it was possible to create a more successful UAV with advanced capabilities.

They decided to take advantage of this, and on March 19, 1971, the Government decided to start developing its own project. The Soviet version of the “Black Cat” received the code “Raven”. MMZ “Experience” (Tupolev Design Bureau) was appointed the lead developer; also involved in the work of other enterprises participating in the study.

By the end of the year, a preliminary design for the Crow was prepared. He proposed the construction of a long-range supersonic reconnaissance drone with flight characteristics at the level of D-21B and a different composition of target equipment. The Raven was supposed to arrive in the launch area under the wing of the Tu-95 carrier aircraft. Then an independent flight began along a given route with the collection of various kinds of intelligence.

Taking into account the peculiarities of the American machine, it was proposed to equip the Soviet “Raven” with a more developed and effective complex of target equipment. A panoramic camera with increased capture bandwidth and resolution was assembled in the instrument compartment. It was also possible to place an electronic intelligence complex with the ability to collect data in all major ranges. 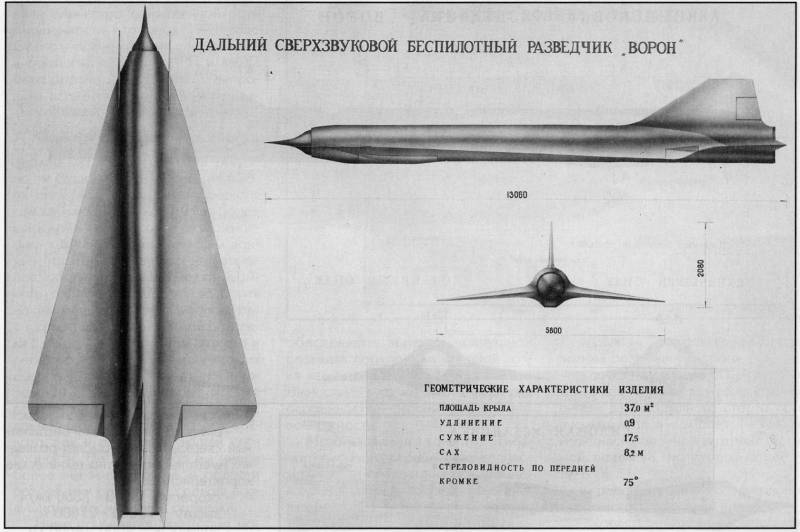 Its own power plant consisted of one RD-012 ramjet engine with a thrust of 1350 kgf, developed at OKB-670. The original D-21B, after being dropped from the carrier, was accelerated using a solid propellant booster. A similar solution was used in the Soviet project.

The Raven product could have a length of more than 13 m with a wingspan of 5.8 m. The mass at the time of dropping by the carrier was 14.1 tons, its own weight without an accelerator was 6.3 tons. The estimated flight speed at an altitude of 23-24 km exceeded 3500 km / h. At the same time, the UAV could show a range at the level of 4500-4600 km. The total range of the complex increased due to the carrier in the form of the Tu-95.

The fate of the preliminary project

The development of the general appearance of the Voron product was completed by the beginning of 1972, and soon the further fate of the project, and with it the promising direction, was to be decided. The customer reviewed the presented developments and decided not to continue the project.

In general, the “Raven” could become a very effective means for conducting reconnaissance in war and peacetime. High flight performance facilitated the solution of basic tasks in different regions of the world and ensured high survivability when overcoming enemy air defenses. 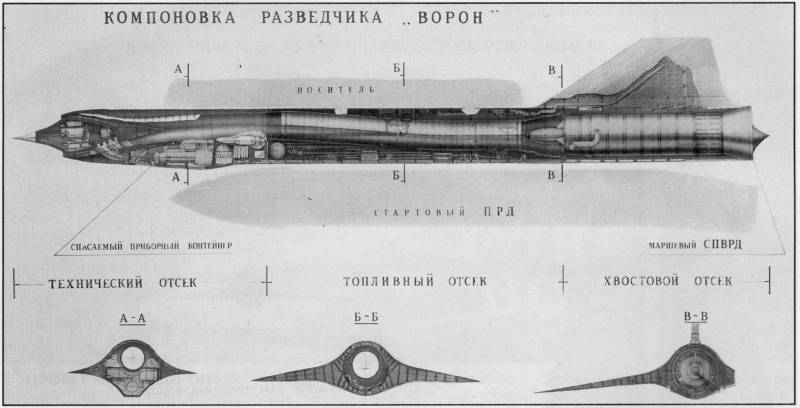 However, there were drawbacks. The main ones are the complexity and high cost of production. There were other problems as well. So, the basis of the reconnaissance complex was to be an aerial camera, but this made it possible to take pictures only during daylight hours. The proposed RTR systems provided limited intelligence. The development of fundamentally new all-weather optical and radio engineering systems took time.

There was another factor that called into question the need for aerial reconnaissance assets. By the early seventies, the first spacecraft of this purpose were created, which had a number of important advantages over aircraft and UAVs. Efforts were concentrated on them, and work on the “Crow” was curtailed.

On March 20, 1971, the last of the D-21Bs used fell on the territory of the PRC. The crash did not go unnoticed, and the Chinese army quickly found the wreckage. At this moment, a curious situation developed. The PLA did not have complete data on American reconnaissance aircraft and did not know about the existence of unmanned reconnaissance aircraft. Therefore, the wreckage of a characteristic shape was considered elements of the fuselage of the manned SR-71 aircraft. The search began for pilots and engines that were not present at the crash site.

The searches, as expected, did not yield any results. Soon, scientists and engineers who arrived at the scene of the accident determined that this was not an SR-71, but a completely new unknown machine, without pilots and with one engine. The search operation was curtailed and preparations began to evacuate the wreckage. 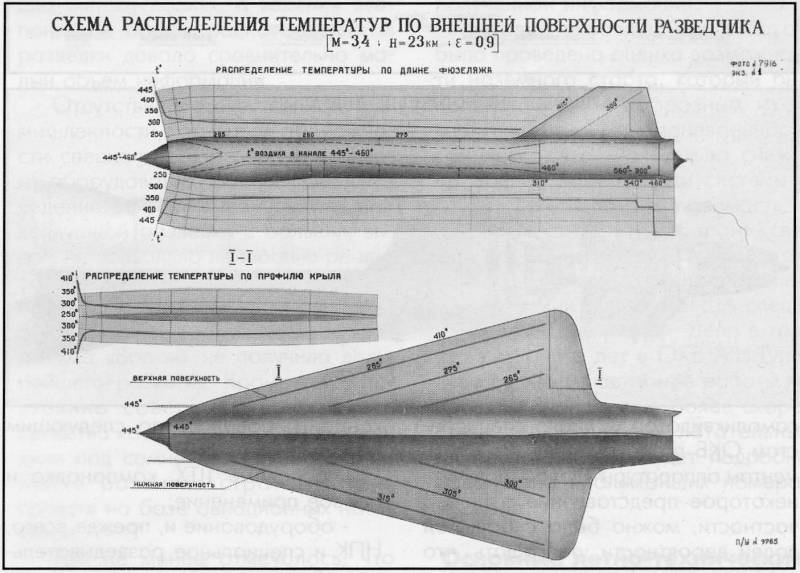 The removed wreckage was studied in specialized organizations and made certain conclusions. What happened next is unknown. However, there is no information about the creation of a Chinese analogue of the D-21.

Perhaps China tried to copy a foreign development, but did not succeed in this business, after which it closed and classified the project. It can also be assumed that the Chinese specialists, having studied the “trophy”, soberly assessed their capabilities and the level of domestic industry, and therefore their own project was not even developed. Either the American concept of a long-range supersonic reconnaissance aircraft, for whatever reason, did not interest the PLA.

After studying (or without it), the wreckage of the D-21B was sent to the Chinese Aviation Museum (Beijing). For many years, these objects of historical and technical value remained in the open air at one of the reserve sites. Later, the broken central section of the fuselage and center section was brought into an acceptable form and made an exhibit in one of the halls.

A gift from a potential adversary

By the aggregate of costs, results obtained, etc. the Lockheed D-21 long-range reconnaissance UAV project is considered unsuccessful. In total, 36 disposable drones were built, of which only 4 were used in a real reconnaissance operation. Two of them were lost on the route, moreover, over the territory of a potential enemy, and it was not possible to get containers with data from the other two. 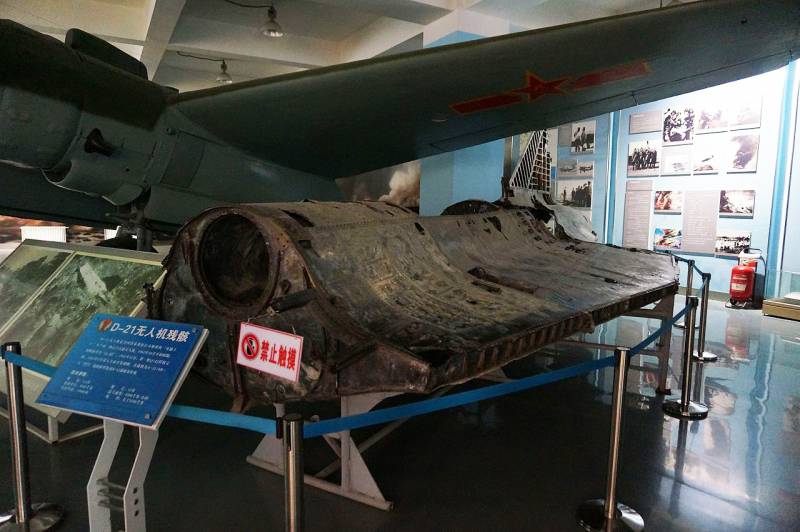 The remains of the D-21B fuselage in the Chinese Museum. Photo Wikimedia Commons

As a result of two accidents, the most valuable secret items fell into the hands of Soviet and Chinese specialists, which could lead to the most serious consequences. However, further events did not develop according to the most dangerous scenario.

The Soviet industry carefully studied the “trophy” and even developed its own version of such a UAV. In addition, based on the collected data, new requirements for anti-aircraft systems were determined. However, the “Raven” did not reach construction and flights, and the decommissioned D-21 no longer risked falling under the fire of Soviet air defense systems. Chinese specialists limited themselves to study only, without serious practical work.

Based on the results of the study of the UAVs obtained in the USSR and China, they were able to establish the level of development of aircraft construction in the United States and determine the range of promising technologies mastered. In addition, interesting and promising foreign developments and solutions were studied. All these data were later used in their own projects of various kinds. Probably, in one form or another, that data can still be used.

Thus, the D-21 UAV is of interest not only from a historical and technical point of view. This product was distinguished by an extremely curious “biography”. Its creation took a long time and required special efforts, and the operation did not give any real results. But the failures during the application became a real gift to other countries, moreover, very useful at that time.