This year, the Russian armed forces received the first unmanned aerial system “Orion” for reconnaissance and strike purposes. By this time, the complex had passed all the necessary tests, incl. showed its combat potential. However, a drone with a combat load on a suspension was shown for the first time only now.

On the eve of the new year, the Ministry of Defense traditionally publishes corporate calendars that use photographs of modern and promising domestic technology. In May 2021, the owner of such a calendar is invited to admire the “reconnaissance and strike UAV” Pacer “. At the same time, the photo on the calendar page is of great interest.

The picture shows the Orion UAV in the clouds of smoke, created as part of the Pioneer development work. The device has a previously unseen desert camouflage color. Small-caliber KAB-20 bombs are installed on the underwing and ventral pylons.

It should be recalled that at the “Army-2020” exhibition, together with “Orion”, various aviation weapons of small dimensions and mass, as well as pylons for their suspension, have already been demonstrated. However, a UAV with a weapon under the wing was shown for the first time – even if it was processed, with effects and within the framework of the calendar. 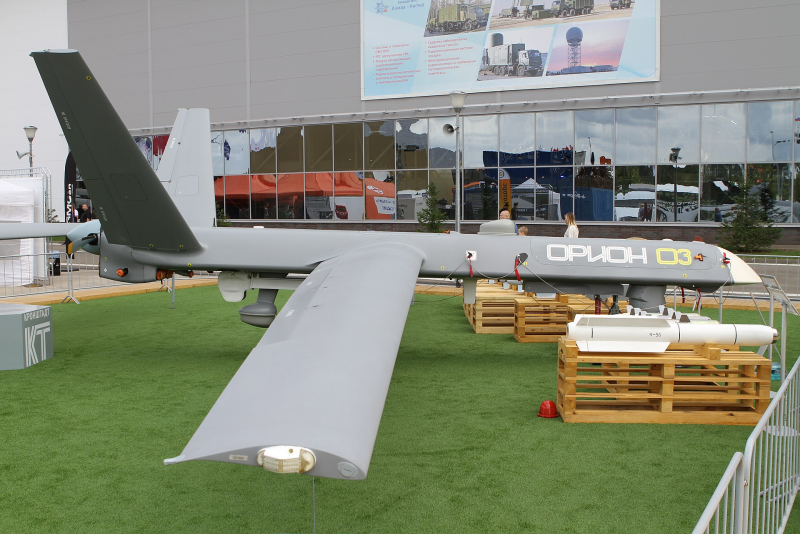 ROC “Inokhodets” was launched in 2011, and its goal was initially to create a reconnaissance and strike UAV. The design of the unmanned platform took several years, and in 2016 flight tests of the finished UAV began with the main part of the electronic equipment. Later, the first information about the possible composition of weapons appeared, and then at exhibitions they showed ready-made samples of on-board equipment and ASP. 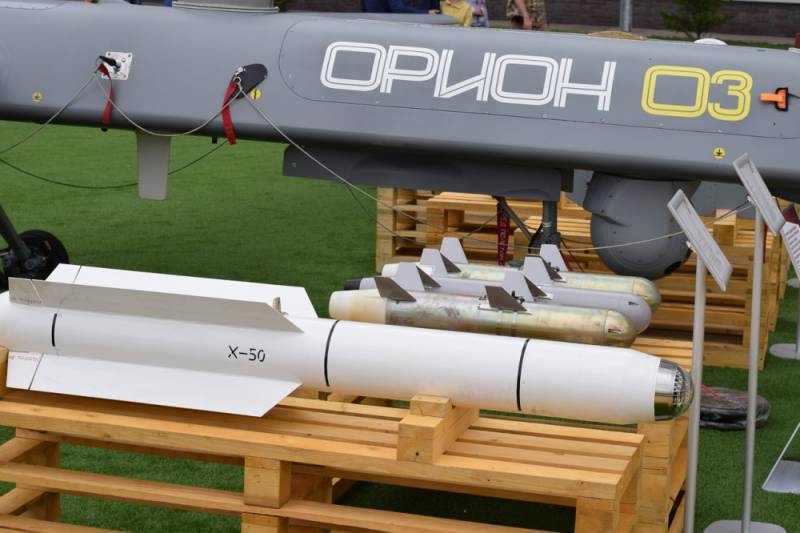 Orion and its weapons at Army-2020. In the foreground is the Kh-50 rocket, behind it are the KAB-20 bombs.
Source: bmpd.livejournal.com

As it became known later, the development of the UAV’s strike capabilities began in 2018. During these tests, Orion used an unnamed type of bombs. In the same year, the complex was sent to Syria for testing in a real airbase. However, there the drone worked only as a scout.

Recently RIA Novosti, referring to its sources in the industry, announced new tests. For the first time, air-to-ground guided missiles were launched at the test site. The targets were hit successfully. In addition, the use of gliding guided bombs was tested. It is noted that as a result of such events, Orion became the first domestic UAV capable of carrying and using missile weapons. However, the specific types of ASPs involved in the tests were not named again.

UAV as a platform

“Orion” belongs to the class of medium-altitude long-duration drones (the English term MALE is widely used – Medium Altitude Long Endurance). This device has a fairly high flight performance and a solid reserve of carrying capacity, which makes it a good platform for placing missile and bomb weapons.

With a wingspan of more than 16 m and a length of 8 m, the Orion has a take-off weight of 1 ton. The payload is up to 200-250 kg. Cruising speed is declared at 120 km / h, maximum is unknown. The device is capable of operating at altitudes up to 7.5 km. Depending on the load and configuration, the UAV can remain in the air for about a day.

A set of electronic systems for various purposes is installed on the drone. The most noticeable component is an optoelectronic station with a characteristic fairing under the bottom. With its help, the UAV can conduct reconnaissance, as well as look for targets for the use of weapons and monitor the results of the strike. A radar station and an electronic reconnaissance system are also proposed for use. 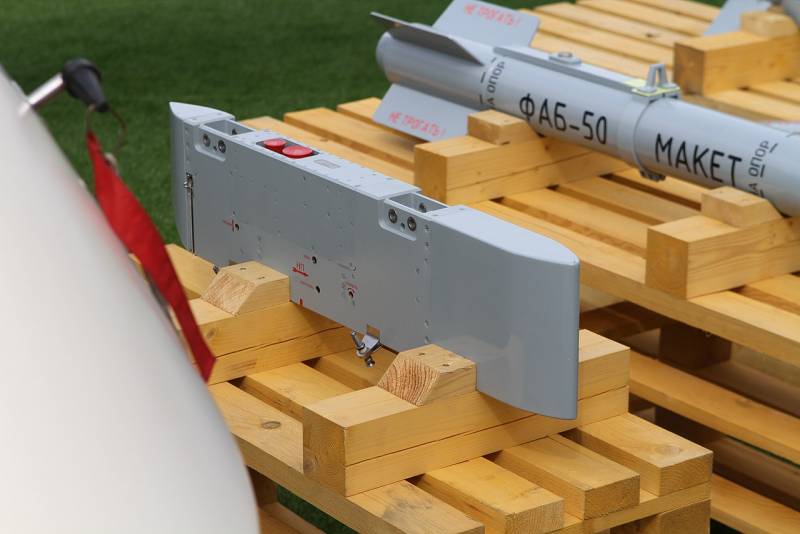 For the use of UAVs as a weapon carrier, removable pylons are used. One such device is mounted under the wing and another is placed under the fuselage. Apparently, several types of suspension systems have been developed. One of the pylons was shown at Army-2020, and the Defense Ministry’s calendar shows a different system.

It has become known for a long time that the Orion UAV will be able to carry and use guided missiles and bombs of several types. Small caliber ammunition was specially developed for it, corresponding to the limited carrying capacity of the device. Models of such products were shown openly several months ago.

For Orion – and in the future for other medium or heavy attack UAVs – a whole range of guided aerial bombs is intended. They are made in calibers of 20 and 50 kg. A planning aerial bomb UPAB-50 with a warhead from a missile of the Grad system is proposed. A similar charge is carried by the KAB-50 product, which can be equipped with an infrared, television and laser homing head. There is a simplified bomb FAB-50.

The smallest in the range are KAB-20 bombs. With a mass of approx. 21 kg such a product carries 7 kg of explosives. Modifications with satellite and laser guidance have been created.

The Kh-50 guided missile was developed. This product is 1.8 m long with a 180 mm diameter case. The mass of the rocket is -50 kg, of which up to 20 kg falls on the warhead of the required type. The rocket can be equipped with different types of seeker. Flight performance was not reported.

The Orion is reportedly the first medium reconnaissance and strike drone to enter the Russian army. Together with it, a number of the latest ammunition should enter service – and in the future it is possible to create new products with certain features and different characteristics. 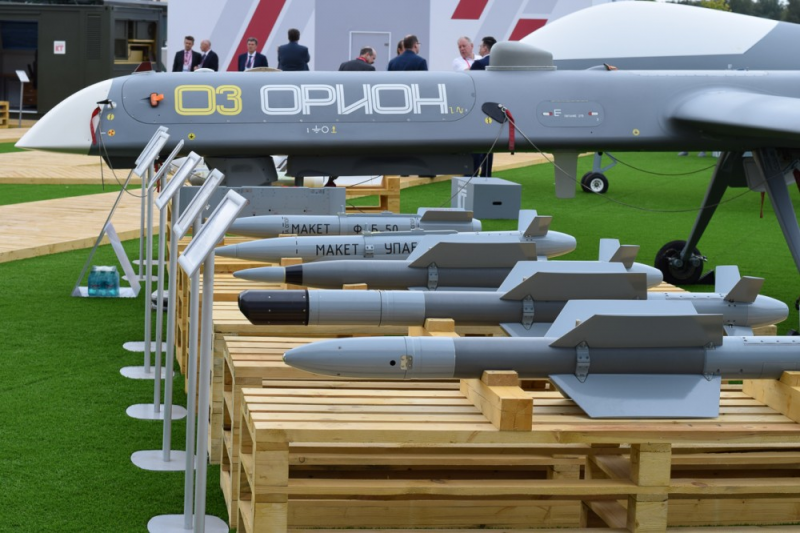 With the help of standard optical means, the Orion UAV is able to observe the terrain and search for targets. Then, using existing types of ASPs, the drone will be able to strike ground targets within a radius of at least several kilometers. Armament with a warhead weighing from 7 to 20 kg is capable of effectively hitting manpower, lightly armored vehicles and unfortified structures. Yielding in power to “full-size” bombs and missiles, the new products are able to fill the empty niche of less heavy AAS and expand the flexibility of using combat aircraft, manned and unmanned.

The high combat potential of unmanned aerial vehicles with such capabilities has been repeatedly demonstrated in the course of real conflicts in recent decades. Reconnaissance and strike UAVs have shown themselves to be a useful and convenient addition to manned tactical aviation, capable of taking on individual missions and reducing risks to people.

Unfortunately, until recently, only foreign countries had complexes of this class, but not Russia. This year, work on the Orion and weapons for them was completed, and the first complex was handed over to the armed forces. Development of several other medium and heavy reconnaissance and strike UAVs also continues. Thus, over the next few years, a full-fledged fleet of new drones with broad combat capabilities will appear as part of the Russian Aerospace Forces.

The situation in the field of domestic unmanned aircraft is developing and constantly changing for the better. Among other things, this should be reflected in the information background. So, just one photo of the Orion UAV with bombs under the wing and fuselage is now becoming almost a sensation. But we should expect that in just a couple of years, such drones will become a familiar element of the Air Force, and their images in any configuration and with different weapons will no longer attract so much attention.