Today it is difficult to surprise someone with an armored car. But for Russia, the car, which is now known under the designation “Lasok 4P”, is somewhat unique. This is an ultra-compact airborne armored vehicle. The vehicle, which is being worked on in Samara, is specially adapted for internal placement in multipurpose Mi-8/17 helicopters.

The developer of the new armored car is LLC “Design and Consulting Center“ Innovative Chassis ”from Samara. The company is engaged in the development of various wheeled vehicles. Among the main directions of the enterprise’s work is the armored assault vehicle “Locust”. BShM on the basis of a compact platform with a 4×4 wheel arrangement could replace the outdated BRDM-2 in the army. At the same time, the development from Samara is lighter and shorter than the BRDM-2M, while having the best protective properties.

Another development of the company, which has recently been increasingly flashed in the press, is a light ultra-compact armored vehicle with an unusual name “Lasok 4P”. A distinctive feature of a small armored vehicle is its airmobile properties. At the same time, in the future, the developers are also going to create an amphibious version of the car and a special modification of Lasok-REP, which can be used to combat low-flying enemy drones.

Today it is already difficult to surprise someone with heavy and multi-seat armored vehicles. Such models are actively being created both abroad and in Russia. Almost every manufacturer of heavy vehicles has managed to organize the production of armored versions. Moreover, compact versions are less common, although the trend for the development of such technology has existed for a long time. In Russia, such machines are only at the prototype stage. 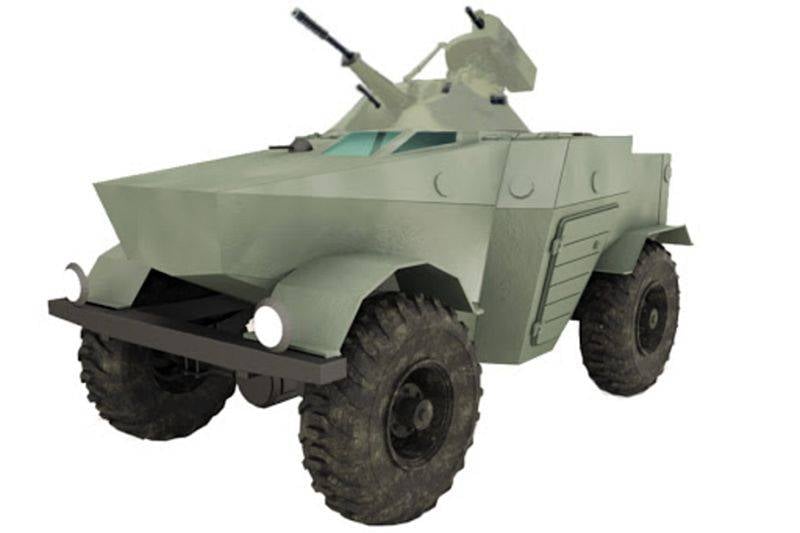 One of the developments in this direction is the light ultra-compact armored car “Lasok 4P”. The machine was created on the basis of experience and analysis of various combat operations in the framework of recent local conflicts. Its main purpose is to carry out combat missions by special units, reconnaissance and advanced combat groups (up to three armored vehicles per staff compartment), as well as patrolling the area, supporting the actions of engineering assault units in urban areas, actions in forest, mountainous and rugged terrain …

A light armored vehicle can be classified as an ultra-compact one. The modular cargo compartment and armored capsule of the vehicle were specially designed with a low silhouette and for a low weight, in order to ensure the possibility of transportation inside Russian multi-purpose Mi-8 helicopters. Including use with transport and assault modifications of the Mi-8 AMTSh (export version of the Mi-171 Sh) in conjunction with combat groups.

The curb weight of the existing prototype is only 2045 kg. The manufacturer of the car claims that the design uses the engine, units and assemblies from serial light off-road chassis of domestic manufacturers. The total mass of the experimental LASOK 4P armored vehicle is up to 2700 kg, the carrying capacity is approximately 650 kg.

It is planned to improve the performance in the serial copy. The curb weight will have to be only 1900 kg (with 4 protection class according to the Russian classification), and the carrying capacity is planned to be increased to 800 kg. The height of the armored vehicle does not exceed 1720 mm, the width is 1880 mm, and the length is 4580 mm. In this case, part of the body of the cargo compartment can be folded, and then the length of the armored vehicle does not exceed 3970 mm. The wheelbase of the new armored car is 2420 mm, the ground clearance is adjustable (260-370 mm). The car is able to overcome fords up to 0.9 m deep. 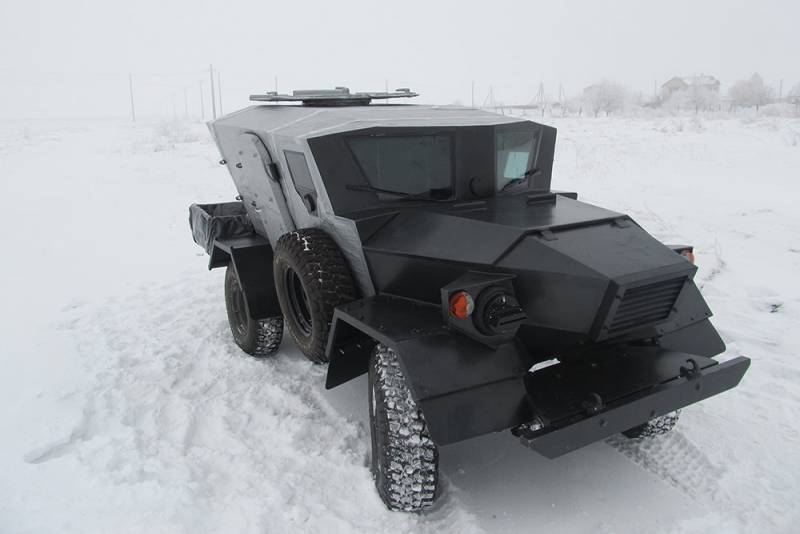 Reducing the length of the armored vehicle to four meters is necessary to improve transportation capabilities, including by air transport and trailers. For example, three cars can be accommodated in a standard body of a 12 m long truck or in a 40-foot sea container.

The light armored car “Lasok 4P” was originally adapted for transportation by multipurpose Mi-8 helicopters. Thus, the standard dimensions of the cargo compartment of the Mi-8T helicopter are: height – up to 1.8 m, length – 5.34 m, width (along the floor) – 2.06 m.The helicopter is designed to carry passengers and cargo with a total weight of up to 4000 kg …

Due to the existing restrictions on the height of the cargo compartment of the Mi-8 helicopters, the developers of the air-transportable combat vehicle provided for tower installations equipped with folding armored shields and a mechanism that allows a large-caliber 12.7-mm machine gun to be removed into the passenger compartment on a special pursuit. The basic armament of the vehicle should include one such Kord machine gun, which can be supplemented with a 7.62 mm machine gun.

Judging by the previously published images of the LASOK 4P armored car prototype, the so-called facet technologies are used in the design of the vehicle, which provide effective rational angles of inclination of the armored hull surfaces and reduce visibility at a great distance.

The manufacturer assures that due to the effective location and rational angles of inclination of the armor plates, the total thickness of the steel armor elements of the armored vehicle body does not exceed 4.5 mm. At the same time, some areas of the hull’s forehead are better armored – 6-8 mm. In general, it can be noted that the prototype of the Lasok 4P armored vehicle is based on a modular layout from the Locust armored assault vehicle, but on the basis of a lighter chassis with a 4×4 wheel arrangement. 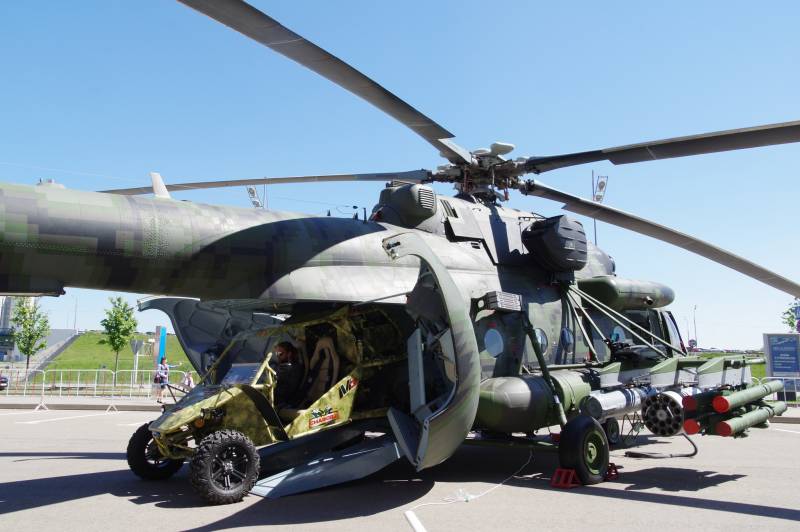 Transportation of the buggy by Mi-8AMTSh helicopter

In addition to the rational configuration of the reservation, the vehicle has its own block-frame chassis design, which provides decent mine protection performance. The “Lasok 4P” armored capsule must accommodate four people. To improve the mine protection of servicemen, it is planned to use anti-traumatic seats and an anti-splinter lining.

The concept of the use of small combat vehicles

The development in Samara of the Lasok 4P light armored vehicle, which can fit in the cargo compartment of the Mi-8 helicopter, is in line with global trends. These trends can be characterized by the use of small combat groups (squads) and small but well-protected wheeled vehicles. Many countries, especially NATO states, are actively using small armored vehicles, including those with mine protection. The greatest success in this was achieved in the United States, where tens of thousands of such equipment are produced.

The need for new armored vehicles has been demonstrated by the conflicts of all recent years. For example, the USSR received valuable combat experience back in Afghanistan, but, in fact, it has not yet been redesigned and adapted to modern realities. All recent conflicts demonstrate the high danger of mine warfare, including the detonation of various improvised explosive devices on the roads.

Despite this, in Russia, wheeled armored vehicles with enhanced mine protection MRAP are still almost completely absent. At the same time, the counter-terrorism operations of recent years, including the hostilities in Syria, also confirm the need for the massive use of such equipment.

Another characteristic feature of local military conflicts in recent years is the widespread use of mobile and well-armed combat groups and units, as well as the conduct of highly mobile combat operations. Often, such battle groups operate on highly mobile compact wheeled armored vehicles or tactical combat vehicles, and in desert conditions on buggies, ATVs and motorcycles. 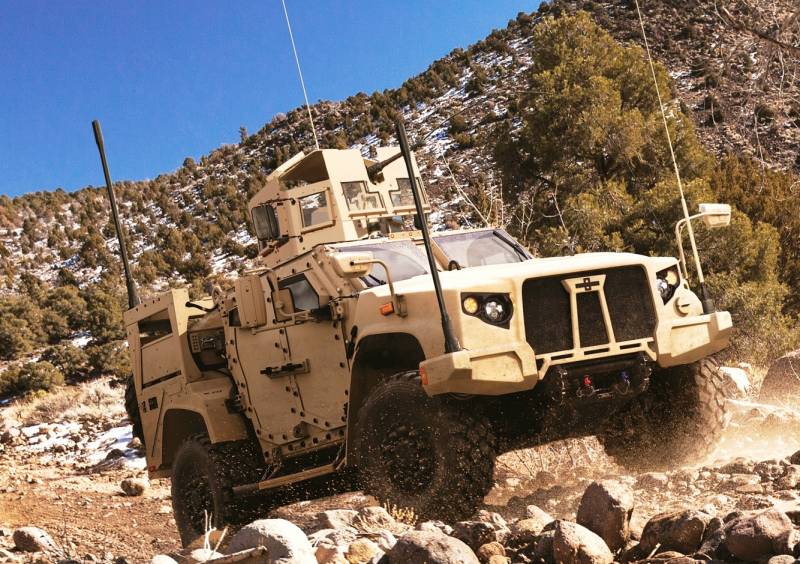 The creation of compact highly protected vehicles is an urgent task for many armies in the world. This technique is developing and improving. Priority is often given to building up mine protection of small armored vehicles up to the MRAP category, with good armor protection up to 3-4 levels according to the NATO classification STANAG 4569.

At the same time, in Russia, even special units are not sufficiently equipped with maneuverable, compact and well-protected armored vehicles with large-caliber small arms, let alone conventional army units. Moreover, the armored vehicles “Lynx” or “Tiger” available in the army are still not massive and have weak mine protection (especially “Tigers”). Insufficient for direct participation in combat operations is also considered to be their reservation in the basic version – class 3 according to Russian standards (level 1 according to STANAG 4569).

The Russian army should pay more attention to the concept of using small combat groups, detachments, which has been implemented in the armies of the USA, France, and Great Britain for several decades. In recent years, similar tactics have been adopted by the Israeli armed forces.

Within the framework of this concept, the Humvee multifunctional combat SUVs have been massively used in the United States since 1984, which have been replaced in recent years by full-fledged MRAPs such as the Oshkosh L-ATV and JLTV Lockheed Martin. They are manufactured in tens of thousands of copies and are distinguished by the powerful armor of the STANAG 4569 level 3-4. At the same time, lightweight versions of the Oshkosh L-ATV are currently being specially developed for the Marine Corps.

Russia does not have its own Panhard VBL

The length of the body, depending on the modification, is 3800 or 4000 mm, the width is 2020 mm, and the height is 1700 mm. Panhard VBL is able to carry 3 people, while being the base for the deployment of various weapons systems, including ATGM. The Panhard VBL’s small dimensions make the vehicle a difficult target for RPGs. It is extremely difficult to hit the target with unguided weapons. 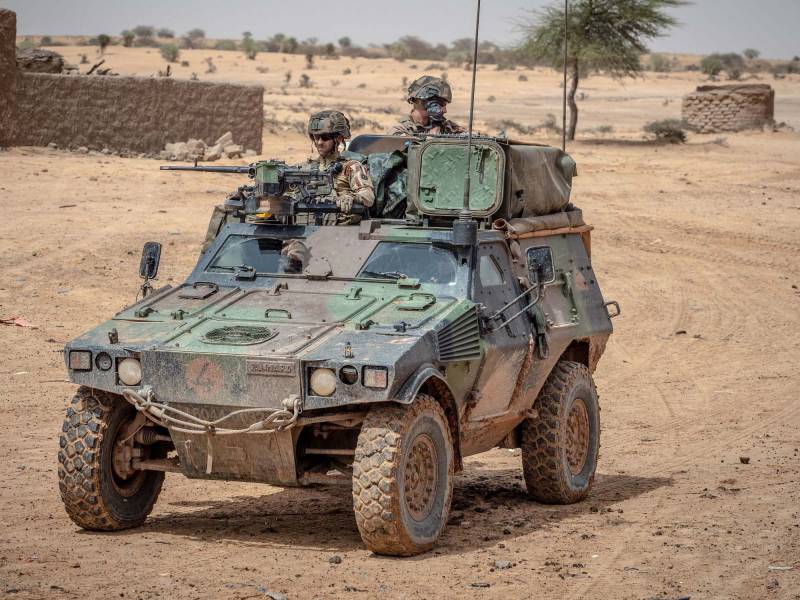 It is clear that the “Tiger” operates in a different weight category, as it is able to transport up to 4-6 people, but the Russian army simply does not have more compact armored vehicles of domestic assembly. Their place could in the future be taken by cars like the Samara “Lasok 4P”. Not necessarily this particular model, but conceptually similar armored vehicles with improved mine protection, bulletproof armor and small dimensions that could be easily used in hard-to-reach areas.

An important factor is the possibility of transporting such machines by the most massive domestic Mi-8 helicopters. The need for such equipment is all the more obvious since in 2013 the internal troops and the border service of the FSB of Russia considered the possibility of licensed assembly of vehicles based on Panhard VBL in our country.