Soldier Touch Point October Seminar. All the fun is hidden

In order to further develop the ground forces in the United States, the OMT (Optionally Manned Tank) program has been launched. Its goal at the moment is to determine the optimal appearance of a promising armored vehicle, which will then form the basis of a real project. So far, we are talking only about the development of the concept, but in the near future it is expected that new stages will start.

The United States Army Ground Vehicle Systems Center (GVSC) is developing the OMT concept in collaboration with other organizations. In particular, from the very beginning, the Fort Benning Maneuver Center of Excellence and defense industry enterprises are involved in the project, which may have to produce new equipment.

Seminars and meetings with tankers, called the Soldier Touch Point, are held regularly. Military personnel study and evaluate current proposals, as well as bring in new ideas. To date, three such events have already been held, the last of which took place in October. This time, six tankers from the Fort Benning base were involved in evaluating the project.

The servicemen were introduced to four combat vehicle concepts. With the help of models and simulators, the tankers considered the current proposals of GVSC and the industry, and then expressed their vision of the project from the point of view of a real operator. It is reported that in the near future the participants of the OMT program will study the results of the last event and draw conclusions, first of all, in the form of changes to existing concepts.

The “optionally manned tank” project is being created without haste so far. In the coming months, GVSC and other participants will develop the proposed concepts, taking into account the wishes and suggestions of tankers. The next events involving military personnel and using “virtual prototypes” are expected in 2021-22 FY.

As the program progresses, new experiments will be carried out using computer models. In particular, it is expected to conduct virtual combat tests. This will allow you to identify and correct possible concept flaws before the start of design, not to mention the operation. 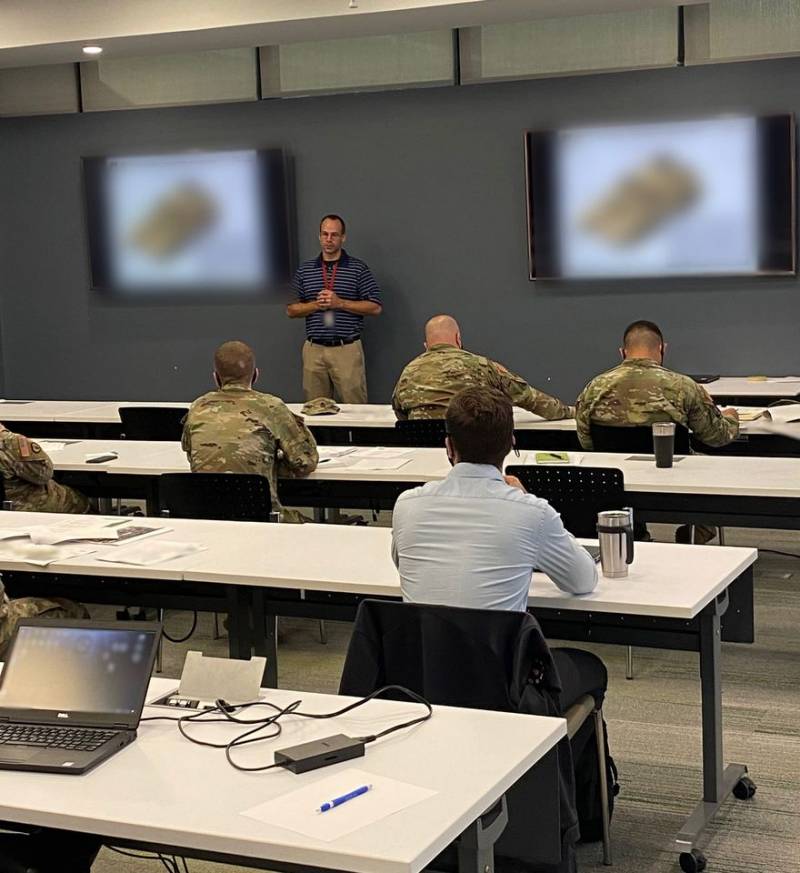 The decisive factor in the OMP program will be 2023. By this time, GVSC plans to complete all concept development and “virtual prototyping” activities. After that, the Pentagon will evaluate the proposed ways of developing armored vehicles and make their decision. It is quite possible that a real tank will be created on the basis of the developments under the current program in the future.

At the Soldier Touch Point meetings, various materials are constantly present on the proposed options for the OMT tank. Models, posters and presentations are on display. At the same time, such materials have not yet been made available to the public. All OMT-related objects in published event photos are retouched. 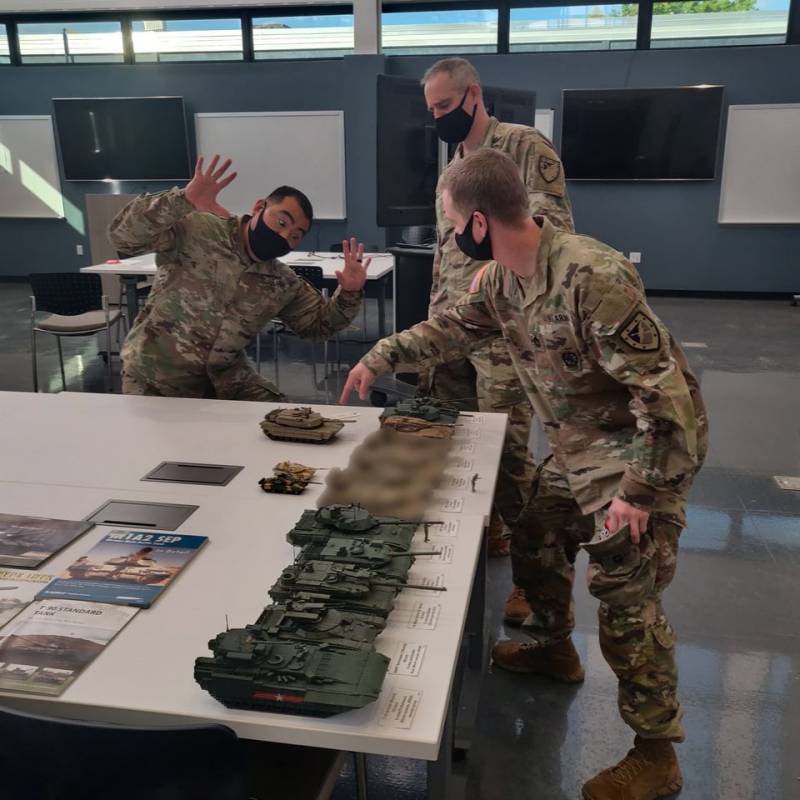 So, in one of the photos from the last event, there is a whole exhibition of models of modern armored vehicles. Russian, American, European and other samples stood in one row. Among them were four models, which they decided to hide when processing the photo. These are likely incarnations of the OMT program.

However, not all retouching copes with its tasks, and you can consider some of the features of the proposed armored vehicles, although technical details cannot be established. All four models show tanks of a traditional (or close to it) layout. A rotating turret with weapons is placed on the hull with a tracked chassis. In terms of their dimensions, OMP concepts, at least, are not inferior to modern MBTs from different countries. In particular, the models turned out to be longer than the Israeli tank “Merkava”, but shorter than the Russian T-14. 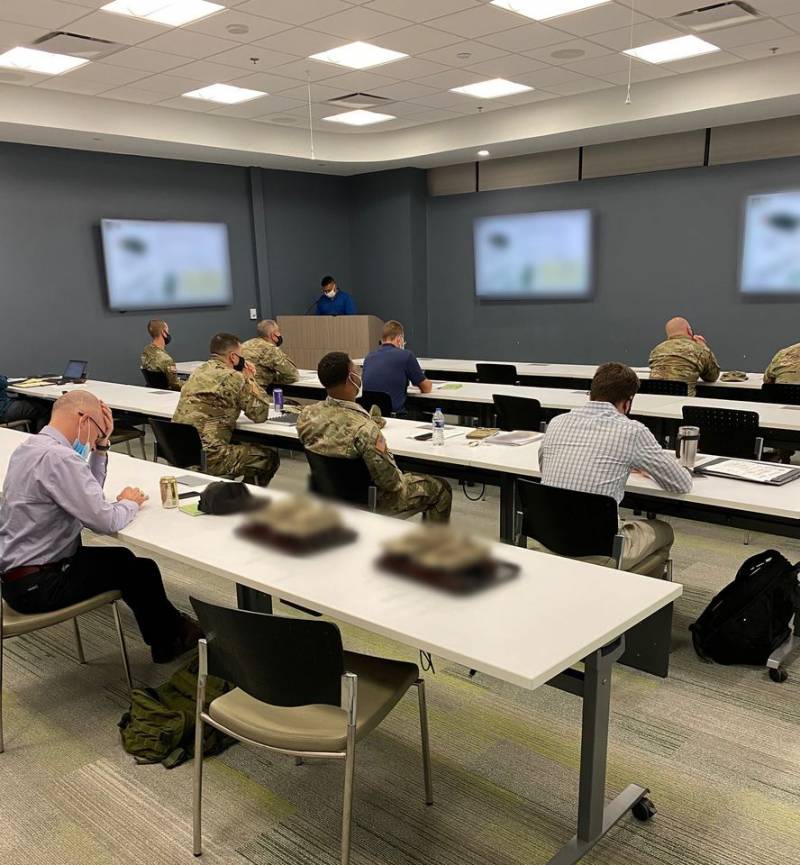 Secret models from a different angle

A curious feature of the models is the presence of a large turret with a developed aft niche, which can even reach the rear of the hull. At past events, it was possible to see a tank with a smaller, traditional turret. Probably, within the framework of the OMT, the possibility of preserving the habitable architecture or introducing a fully automated fighting compartment is being studied.

It is not known for what purpose several variants of the OMT tank are being worked out and proposed at once. Perhaps these are several concepts with different features, of which the best will be chosen in the future. There is also a version about the development of a family of armored vehicles consisting of several samples with different characteristics and tasks. The absence of fundamental differences, even in a retouched form, may hint at the elaboration of several variants of the tank in one class.

A number of key features of the OMT concepts cannot be ascertained from the available materials. In particular, the required characteristics of the engine, capable of providing the required mobility, are unknown. In addition, the question of armaments remains open. For now, with equal probability, we can expect the preservation of 120-mm guns or the use of new systems of increased caliber.

The obvious and the unknown

The work on the creation of the OMT concept has been going on for a long time and has probably produced some results. In the coming years, the development of the optimal appearance of a promising tank will continue. It should result in a change in the face of American armored forces, even in the distant future.

With all this, it should be noted that the appearance of a promising tank has not yet been determined. We are talking only about general concepts, each of which has certain features. In addition, at any moment it can undergo the most serious changes. So far, the most important question remains unanswered: which of the concepts and when will be developed and turn into a full-fledged project.

Due to the lack of technical data, attention should be paid to approaches to the creation of new concepts. GVSC and industrial enterprises are working on the technical part of the project. They regularly show the results of their work to tankers, receive feedback and accept proposals, and then improve the developed concepts. 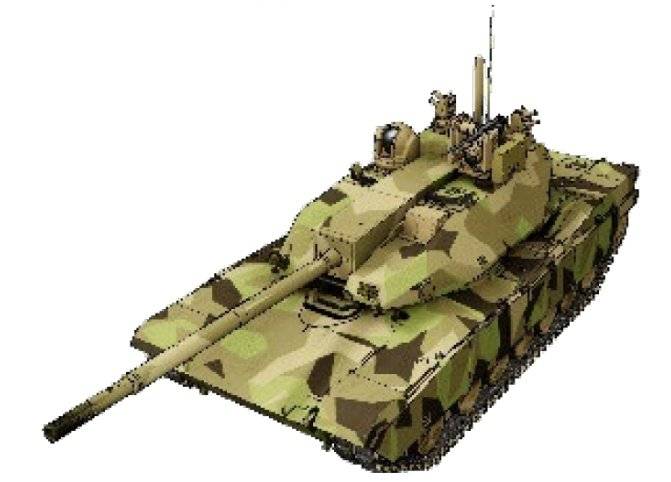 One of the options for a promising tank, demonstrated earlier

Thus, the Center for Land Vehicles not only liaises with the army, but also consults with those who will have to operate new tanks in the future. It is also important that all this is carried out at the stage of preliminary research – even before the formation of requirements for a promising tank. This approach, combined with “virtual prototypes”, allows you to complete the work in the shortest possible time and without serious expenses.

Working for the future

Work on the Optionally Manned Tank concepts is ongoing and will take several more years. During this time, new events of all kinds will be held, and the Pentagon will continue to publish reports. These messages may again contain certain curious objects or materials, incl. able to indicate the progress of work and their expected results.

There is not too much data available so far, which makes it impossible to fully evaluate the OMP program from a technical point of view. However, issues of an organizational nature, methods of preliminary research and design, as well as the timing of work are disclosed. All this is also of great interest, since it shows how the processes of creating new American armored vehicles currently look like. Perhaps some of the methods shown should be taken into account and adopted by other countries.