Unmanned surface ships (UNSC) are being actively developed by the armed forces of the leading countries of the world. In the article Unmanned Surface Ships: The Threat from the West, we examined the BENK projects being developed in the United States, the European Union and Israel.

No less attention is paid to the development of unmanned surface ships in the PRC. China is actively developing the direction of creating unmanned weapons. And he achieved significant success in this field. Like other countries in the world, initially China paid maximum attention to aviation systems – unmanned aerial vehicles (UAVs).

However, in parallel, work was carried out in the interests of the fleet. Considering the pace of construction of the Chinese naval forces (Navy), there is no doubt that in the foreseeable future, the PRC will flood the ocean with BENK of various classes and purposes.

One of the implemented projects is the unmanned boat M75A (the image is given at the beginning of the article). It is primarily designed to counter violations at sea – by pirates and smugglers.

The M75A boat patrols the water area with a radius of 50 kilometers (the range is most likely limited by the range of the communication system that provides control of the unmanned boat). The M75A equipment allows vessel detection and recognition at any time of the day. Pursuit of the target can be carried out at speeds up to 35 knots.

The Beijing Sifang Automation Research and Production Company has developed the SeaFly-01 unmanned boat. The body of the base model is 10.25 meters long and 3.7 meters wide. Dimensions can be adjusted at the request of the customer.

The maximum speed is 45 knots. The maximum cruising range is over 400 kilometers.

The SeaFly-01 multi-section body is made of composite materials. It provides increased internal volume for storing equipment and cargo. And also work at wave heights up to 2.5 meters.

Low height, “faceted” hull configuration and the use of radio-absorbing materials significantly reduce the visibility of the unmanned boat SeaFly-01.

The SeaFly-01 is propelled by two water-jet propellers. 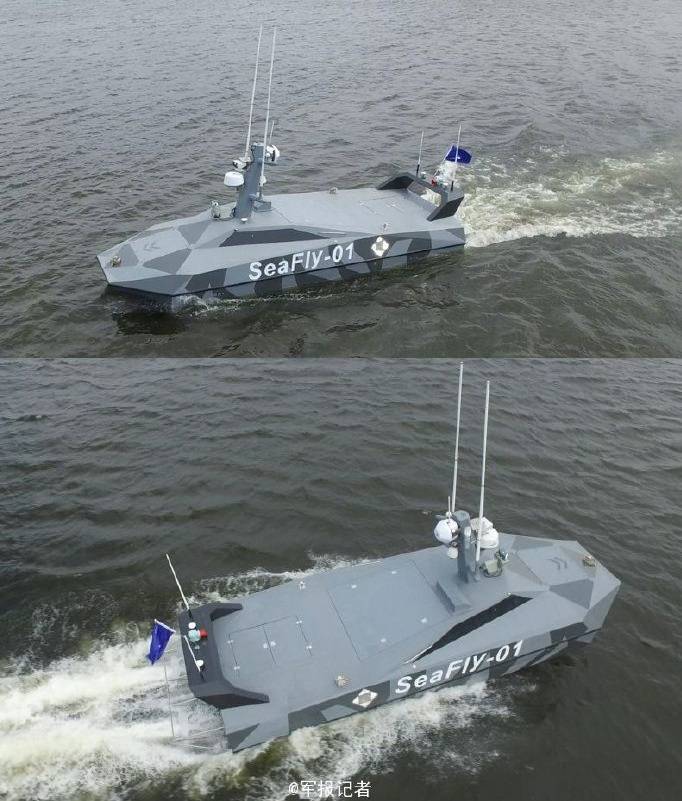 The unmanned boat SeaFly-01 is equipped with advanced control systems and automation equipment. It can not only be controlled by the operator, but also automatically follow a given route, independently choose a route, avoid collisions with obstacles and automatically return to the base.

Several unmanned boats SeaFly-01 can be linked into one network.

An attack by enemy surface ships (NK) by a coordinated group of dozens of small BENKs, carried out simultaneously from several directions, will distract the enemy, inflict damage on surface ships, even with weak weapons such as multifunctional anti-tank guided missiles (ATGM) or automatic cannons of 30 mm caliber, due to the defeat vulnerable points – radar canvases, short-range anti-aircraft missile systems (SAM), control rooms, deck helicopters.

Also, small BENKs can clarify the coordinates of the enemy’s NK for a subsequent attack with anti-ship missiles (ASM). Theoretically, BENK can carry out attacks of the “kamikaze” type, implementing self-detonation at the side of the enemy’s NK. 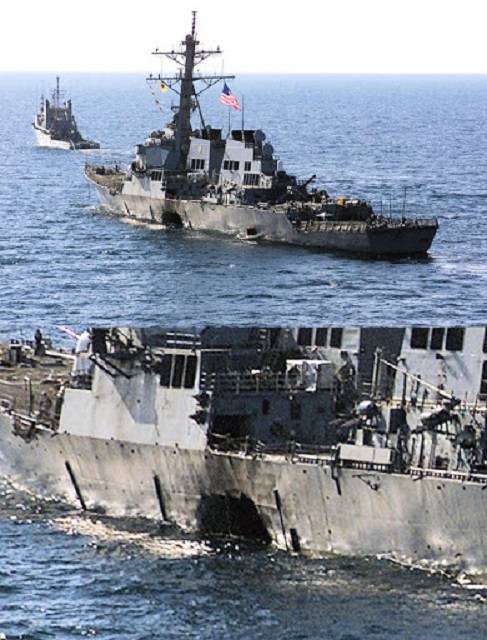 Destruction of small vessels can be difficult due to their small physical dimensions, high speed and low visibility. At the same time, the cost of weapons spent on the destruction of small unmanned surface ships may be higher than that of the BENK themselves.

Test of unmanned vessels operating in a group

The carrying capacity of BENK SeaFly-01 is 1.5 tons. On the mast and / or in the sealed compartment, various reconnaissance means can be installed – radar and optical-location stations (radar and OLS), as well as other equipment.

Control can be carried out directly at a distance of up to 50 kilometers. At longer ranges, control is carried out through satellite communications and the Chinese satellite navigation system BeiDou.

An interesting feature – unlike the American global positioning system GPS and the Russian GLONASS, the Chinese BeiDou system itself can act in a limited format as a satellite communication system, allowing you to transmit and receive short data packets. This makes it possible in an emergency, for example, when communication satellites fail, to give the command to the unmanned boat to return to the base. 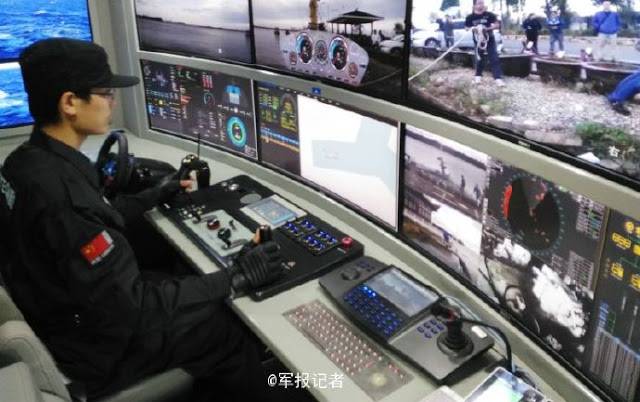 Some modifications of the SeaFly-01 can subsequently be armed with machine guns of 5.8 or 12.7 mm caliber, as well as ATGM.

One of the promising projects is the development of an unmanned surface ship JARI-USV with a length of 15 meters and a displacement of 20 tons. The speed of BANK JARI-USV reaches 42 knots (77 km / h), the cruising range is 500 nautical miles or 926 kilometers.

BANK’s JARI-USV reconnaissance equipment includes a phased array radar, sonar and OLS. Four radar canvases provide a view of the airspace at a distance of up to 100 kilometers. 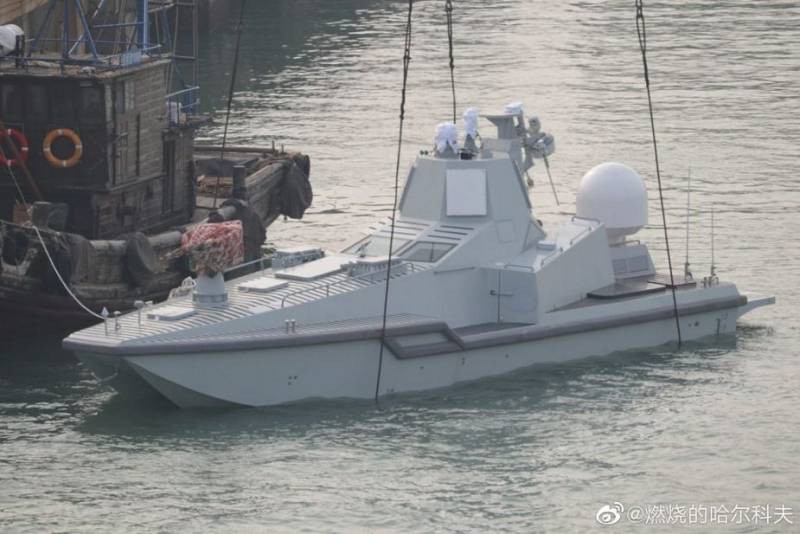 BANK JARI-USV is created on a modular basis, which allows you to mount equipment and weapons on it based on the task at hand. It is planned that the JARI-USV can be armed with a vertical launch unit (UVP) for eight multipurpose ATGM HJ-10, a torpedo tube and / or a module with an automatic cannon of 30 mm caliber. 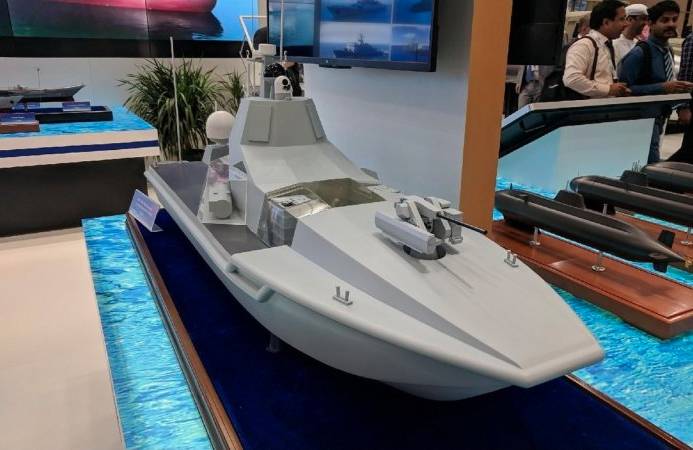 Yunzhou Intelligence Technology (Yunzhou-Tech) has developed a series of BENK type M80, designed to meet the challenges of exploration and hydrography.

The BENK M80A hull is implemented according to the “trimaran with hydrofoil” scheme and is made of several layers of the company’s patented foamed carbon fiber.

The small profile of the vessel (in combination with inclined surfaces and the use of radio-absorbing materials) provides the M80A with low radar signature.

BENK М80А can operate at wave heights up to 2.5 meters.

It is driven by two electric motors, providing it with a cruising range of up to 200 nautical miles at a speed of up to 10 knots. 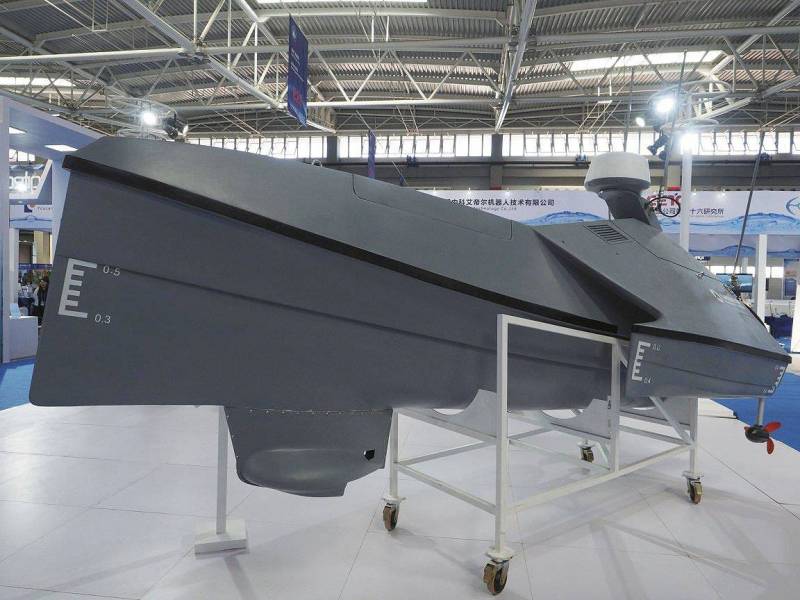 BENK М80А is equipped with a universal compartment with dimensions of 1.5×1.2×0.5 meters and a carrying capacity of 150 kg, which can accommodate side-scan sonars and other equipment necessary for carrying out hydrological work – acoustic Doppler current profilers, multibeam echo sounders, towed solid bottom profilers and multi-parameter probes.

The communication range with BENK M80A is 5-15 kilometers, and there is also 4G communication equipment on board, which makes it possible to use commercial LTE cellular networks. And with the help of specialized equipment (directional antenna?) To transmit large amounts of data at a distance of up to 30 kilometers.

The China Aerospace Science and Technology Corporation (CASC) is developing a line of BENK, which should include models of various dimensions.

The B850 is a high-speed unmanned boat designed for patrol and expeditionary operations. The length of its hull is 8.8 meters, the maximum speed is up to 40 knots, and the autonomy is about a day. 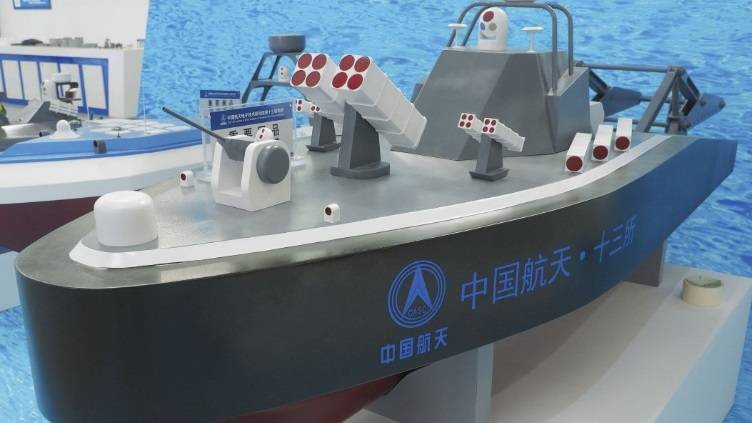 The reconnaissance equipment installed on the CASC BENK can include sonars, radar and OLS. Reconnaissance capabilities are complemented by an onboard UAV-quadcopter.

The armament of the above-mentioned BENK includes remote-controlled modules with 7.62 mm or 12.7 mm machine guns. Additionally, ATGM units can be installed. Modifications A1150 and C1500 can be equipped with torpedo armament.

The most ambitious project is the D3000 vessel, 30 meters long, with a cruising range of up to 450 nautical miles and an autonomy of up to 90 days.

The project allows for the possibility of increasing the size of the vessel, with a corresponding increase in cruising range and autonomy.

BENK D3000 is planned to be equipped with a hybrid power plant, including propulsion electric motors, which will be powered by diesel generators. Gas turbines can be used instead of diesel engines.

A large capacity battery will keep running in the event of a main power failure. Also, on the battery BENK D3000, low-noise patrolling at low speed can be carried out. It is assumed that additional photocells can be installed on the body for recharging the batteries.

The D3000 is a trimaran. Its maximum speed is about 40 knots. It operates at wave heights up to 10 meters.

The payload of BENK D3000 is up to 10 tons. The modular implementation of the project allows you to flexibly assemble equipment and weapons in accordance with the customer’s requirements.

The BANK D3000 is controlled via ChinaSat satellite communication (it is obvious that there is also a direct radio control channel).

In the front of the hull, a Ture 730 CIWS armament module is installed with a 30 mm multi-barreled automatic cannon, which includes a radar and an OLS for detection and guidance.

The D3000 is designed to operate autonomously, as part of a BENK group or as part of a combined flotilla, including BENK and NK of different classes, performing reconnaissance tasks, striking ground and surface targets, and anti-submarine warfare.

The D3000A modification is optimized for reconnaissance and support for the defense of the flotilla. To this end, the D3000A is equipped with a multifunctional radar and sonar in the bow of the vessel. The D3000A’s armament includes anti-aircraft missiles and torpedoes.

The D3000B modification is designed to perform reconnaissance and strike missions. To do this, the D3000B is equipped with two quad anti-ship missile launchers.

Unmanned surface ships are just beginning their way to the navies of the leading countries of the world. Currently, there are many problems, primarily with the reliability of BENK equipment.

After all, if the UAVs, after patrolling for several days, return to the airfield for technical inspection, then at BENK it is necessary to ensure the uninterrupted operation of equipment and mechanisms for several months without maintenance.

However, reliability issues will be addressed. Indirectly, this will lead to a decrease in the number of crew members of “manned” surface ships.

The scope of application of BENK will continuously expand.

Like UAVs in the sky, surface and underwater uninhabited vessels will significantly change the face of the battlefield on and under water.