The United States plans to expand its presence in the Arctic, and the naval forces should become one of the main instruments for solving this problem. For full-fledged work in high latitudes, the fleet needs icebreakers – but the situation around such ships leaves much to be desired. The number of heavy icebreakers capable of operating in the Arctic seas is insufficient, and the new ships so far exist only in the form of plans.

The US icebreaker fleet, which supports the operations of the Navy and commercial carriers, is part of the Coast Guard. At the moment, the US Coast Guard formally has only three heavy icebreakers. These are two ships of the Polar type and one of the Healy design. Medium icebreaker USCGC Mackinaw (WLBB-30) operates in the Great Lakes and does not go out into the oceans. Also worth mentioning are 9 Bay-class icebreaking tugs distributed across several ports.

Of this total, only two heavy icebreakers are capable of going out to sea and operating in the northern regions of the Pacific and Atlantic Ocean and to assist the work of the US Navy in the Arctic. These ships are USCGC Polar Star (WAGB-10) and USCGC Healy (WAGB-20). The third heavy icebreaker, USCGC Polar Sea (WAGB-11), stands at the quay wall after an accident and serves as a source of spare parts for a vessel of the same type. 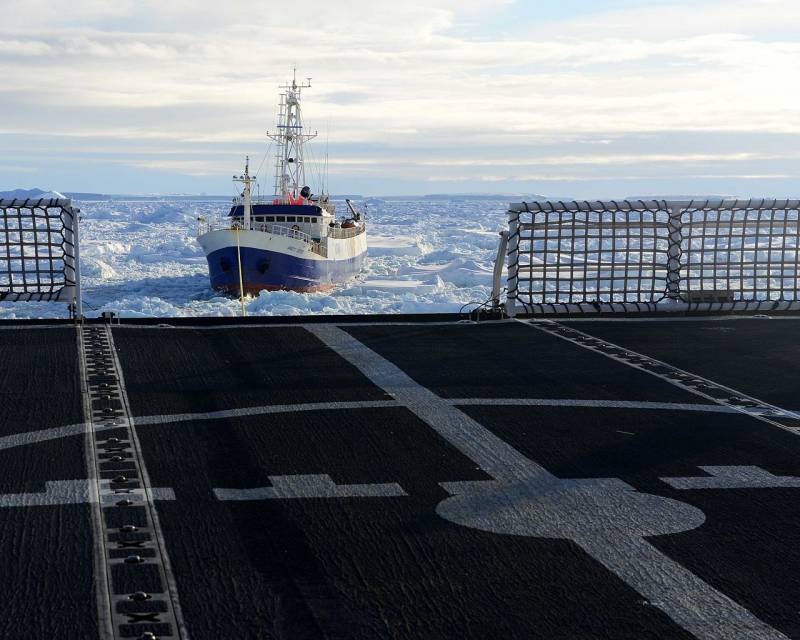 USCGC Polar Star tows the vessel. Photo by US CG

The USCGC Polar Star (WAGB-10) icebreaker began service in 1976, and underwent modernization at the beginning of the last decade. This is a 122 m long vessel with a total displacement of more than 13.8 thousand tons. The power plant is built according to the CODLOG scheme and includes 6 diesel engines with a capacity of 3 thousand hp each. and 3 gas turbine engines of 25 thousand hp each. In clear water, the icebreaker accelerates to 18 knots and has a range of 16 thousand nautical miles. The design of the hull provides passage through ice up to 1.8-2 m thick at a speed of 3 knots. It is possible to overcome hummocks up to 4 m thick.

USCGC Healy (WAGB-20) was built in 1996-99. and is the newest of all US heavy icebreakers. It has a length of 128 m with a displacement of more than 16.2 thousand tons. A diesel-electric power plant with four internal combustion engines with a capacity of 11.6 thousand hp was used. Two running electric motors have a capacity of 15 thousand hp each. The maximum speed of USCGC Healy reaches 17 knots. In terms of basic performance indicators, the vessel is not inferior to other heavy US icebreakers. On board there are its own laboratories with the ability to accommodate one or another scientific equipment. 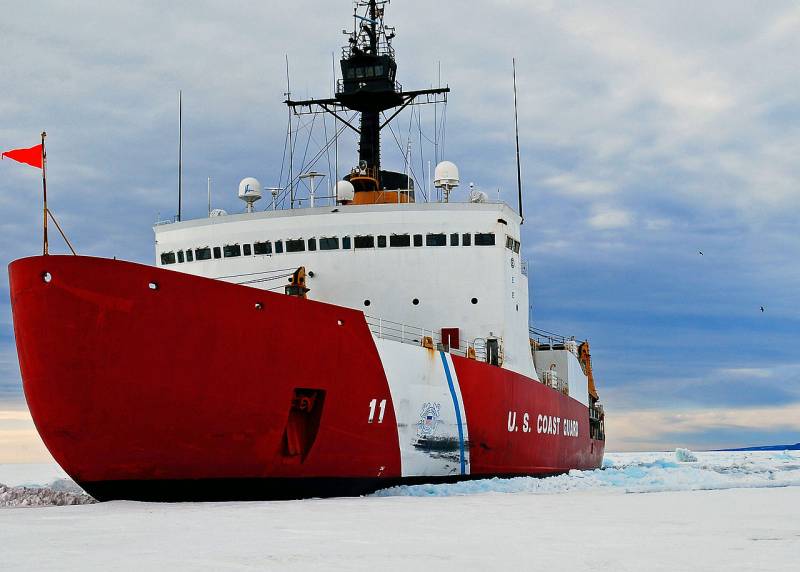 Icebreaker USCGC Polar Sea (WAGB-11) at sea. Now he stands by the coast. Photo by US CG

Both active icebreakers and one cannibalized vessel are based in Seattle, Washington. Depending on the task at hand, they can work in the region of Alaska and the Aleutian Islands. In addition, they are used to support the operation of American bases in Antarctica. If necessary, the transition of icebreakers to the East Coast is not ruled out to solve certain problems.

In the early tenths, simultaneously with the decommissioning of the icebreaker Polar Sea, the Coast Guard command raised the issue of building new ships. Initially, the future program was called Heavy Polar Ice Breaker, and later it was renamed Polar Security Cutter.

For several years, the US Coast Guard tried unsuccessfully to find funding and coordinate the construction of several new icebreakers. For one reason or another, the full launch of the future PSC program has been repeatedly postponed. In 2016, the situation changed. In connection with the change in the main strategies, the US Navy began to show interest in the icebreaking theme, and the two structures joined forces. 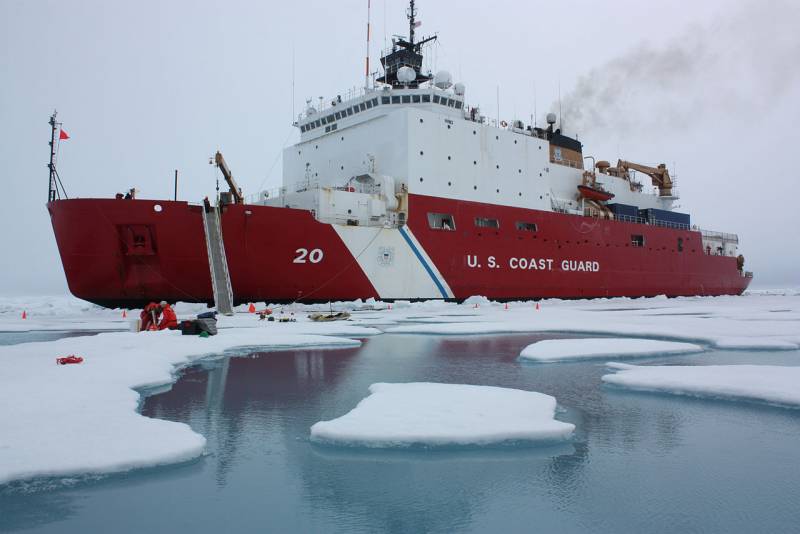 Icebreaker USCGC Healy (WAGB-20) is the newest of the heavy ones. Photo by NASA

In 2017, the development of requirements for future icebreakers and the preparation of construction plans began. Later, the competitive design of a heavy-class icebreaker began. The winner of the program was VT Halter Marine (Pascagula, Mississippi. In April 2019, it was awarded a contract worth $ 746 million to complete the design and construction of the lead icebreaker PSC. An option was also issued for the next two vessels of the same type.

The German research vessel Polarstern II was taken as the basis for the VT Halter Marine project. Its design is being finalized in accordance with the requirements of the Coast Guard and the Navy, and is also equipped with new equipment. It is expected that the finished icebreaker of the new project will have a length of 140 m and a displacement of more than 23 thousand tons. A diesel-electric power plant with stern rudder propellers and bow thruster will be used. The vessel will be able to break through ice with a thickness of at least 1.4 m with constant movement at 3 knots; will also allow the passage of thicker obstacles.

The laying of the head PSC with tail number WSMP-1 will take place in 2021. In 2022-23. the ship will be built, and delivery to the customer is expected by June 2024. Then USCG wants to build two more new heavy icebreakers – with delivery in 2026 and 2027. The total cost of the three ships could reach $ 2 billion. 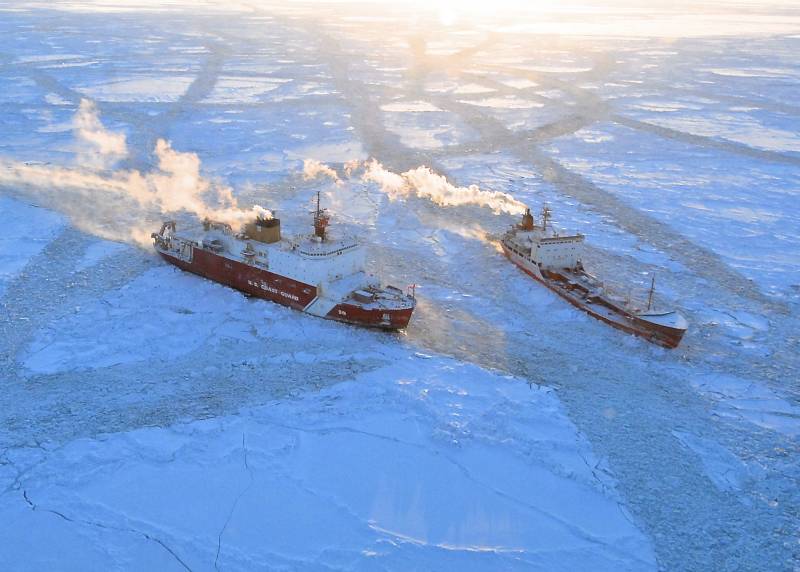 USCGC Healy escorts the Renda tanker to the port of Nome, Alaska, 2012. Photo by US Navy

It is curious that the PSC program provides for the construction of not only three heavy icebreakers, but also three middle class vessels. Requirements for this project are now being worked out, and development has not yet begun. The timing of the construction is still unknown. It was mentioned that the entire PSC program should be completed by 2030 or a little later.

Despite the availability of the necessary technology, the United States has not yet built nuclear-powered icebreakers. In addition, they do not have warships capable of independently operating in the Arctic seas without icebreakers. At the same time, the potential adversary in the person of Russia has both. Perhaps the US will take action and start closing the gap in these areas.

In June this year, US President Donald Trump signed the Memorandum on Safeguarding US National Interests in the Arctic and Antarctic Regions. Among other things, it defines the main paths for the development of the icebreaker fleet. It is proposed to study and evaluate a wide range of modern and promising shipbuilding technologies suitable for use in new icebreakers. 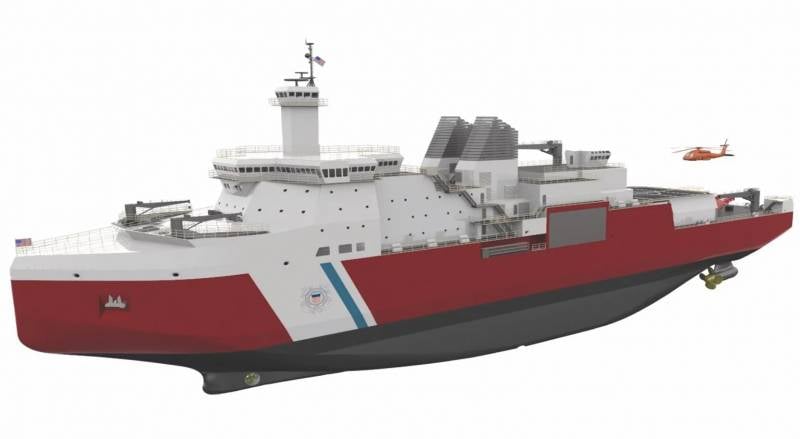 In particular, the Memorandum calls for studying the issue of building icebreakers with a nuclear power plant, as well as working out the topic of equipping such ships with defensive weapons. The results of such studies can be used in the further development of the PSC program or other similar projects.

The memorandum is calculated until 2029, which makes its proposals look very interesting. Within the specified time frame, it is planned to build three heavy icebreakers PSC and possibly carry out work on medium-sized vessels. The idea of ​​equipping icebreakers with defensive weapons is generally realistic and can be implemented on time – albeit with some limitations. As for nuclear power plants for icebreakers, by the end of the decade, one can expect the appearance of similar projects, but not ready-made ships.

In light of these circumstances, the proposal of the Memorandum on the lease of foreign ships looks curious. It is proposed to consider such measures in case of failures with the construction of our own icebreakers and with the development of promising projects. 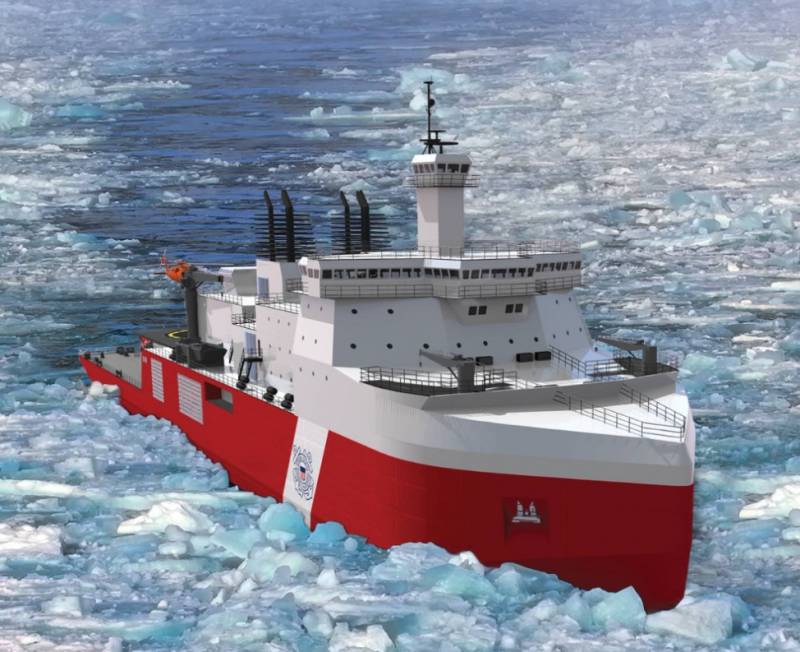 PSC in service – so far in the picture. VT Halter Marine Graphics

Currently, the state of the US Coast Guard icebreaker fleet leaves much to be desired. It is capable of providing scientific and economic activities, but its potential is insufficient for full-fledged assistance to the naval forces in the Arctic. First of all, there are quantitative problems. Fortunately for the Navy, the country’s leadership and security forces understand this problem and are even taking measures to rectify the situation.

So far, there are only two heavy icebreakers in service, built in the seventies and nineties. A third is expected to appear in 2024, and two more will be operational by the end of the decade. Apparently, by this time it will be necessary to write off the completely obsolete vessel USCGC Polar Star (WAGB-10). As a result, in 2023. in the ranks there will be no more than 4-5 heavy icebreakers and, possibly, up to 3-4 medium ones, all of which are diesel-powered.

Due to this size and technical features, the overall potential of the American icebreaker fleet will be limited. However, against the background of the current situation, even 8-10 diesel vessels look very advantageous. Time will tell whether it will be possible to fulfill the current plans and implement the requirements of the Memorandum.