Since the first flight of the aircraft, built by the two American inventors and designers, the Wright brothers, the United States has had particular trepidation about aviation. This is largely reflected in the country’s armed forces, as well as in the methods of conducting military operations. The Air Force currently plays a huge role in American military doctrine. At the same time, the special forces, which are directly subordinate to the Air Force Special Operations Command, are the second largest personnel after the special forces units of the US Army.

Currently, the US Air Force Special Operations Command (also known as the United States Air Force Special Operations Command, AFSOC) is the supreme command body of all special forces that belong to the Air Force. The main base and headquarters of AFSOC is Herlburt Field Air Force Base, located in Ocalus County, Florida, near Mary Esther. Up to 8 thousand military personnel are based here. At the same time, the total number of personnel of the special forces of the American Air Force is estimated at about 20,800 people, including the National Guard and civilian personnel.

The 1st, 24th and 492nd Special Operations Air Wing are located directly at Hurlburt Field. The latter includes, among other things, the US Air Force Special Operations School, Special Training Groups, and the 18th Flight Test Squadron. This squadron is engaged in direct testing and assessment of the capabilities of aircraft and helicopters intended for use by units of the Air Force Special Operations Command, including in combat conditions. Also, the 492nd Aviation Wing has the 6th Special Operations Squadron, which also operates foreign equipment. In particular, the squadron was armed with Mi-8/17 helicopters and An-26 transport aircraft. The thing is that this squadron evaluates, trains and advises representatives of the aviation forces of foreign states operating various equipment (not only of American production).

The pilots and fighters of the US Air Force Special Operations Forces are highly trained military specialists who are ready for rapid deployment and action anywhere in the world. They can perform tasks in any climatic conditions. US Air Force special forces are used to provide direct fire support to special forces groups, as well as conduct reconnaissance, deliver equipment, equipment, ammunition, and people to territory controlled by the enemy. In addition, the Air Force special forces are responsible for training air gunners, meteorological specialists capable of operating in combat conditions, search and rescue teams for helicopters and aircraft shot down or fallen on enemy territory, radio technical service specialists, specialists in psychological operations, etc. etc. 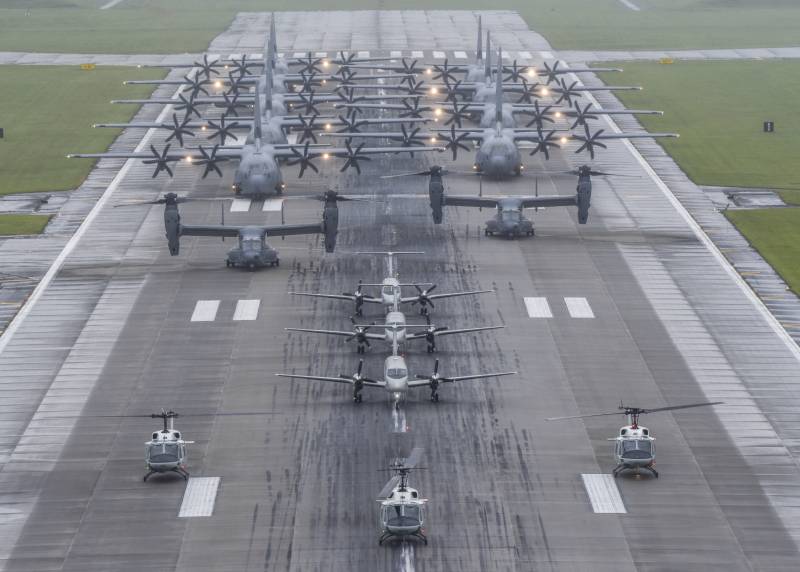 Aircraft equipment of the United States Air Force Special Operations Command during an exercise. May 2020

The US Air Force Special Operations Command line units are represented by four main divisions: the 1st, 24th, 27th, and 492nd Special Operations Aviation Wings. All of them are based directly in the United States. The 1st and 27th Aviation Wings specialize in direct fire support of special forces units on the battlefield, reconnaissance and observation of the enemy and its objects, and transportation of special forces units. 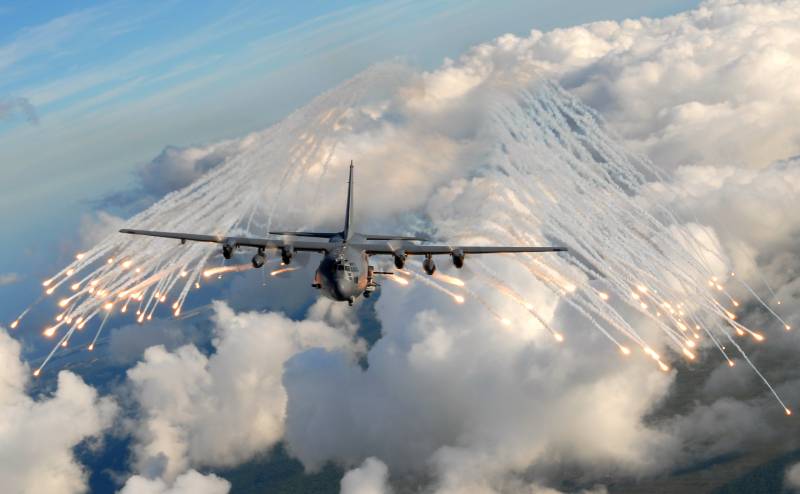 It is in the arsenal of the special forces of the US Air Force that the famous gunships, or flying batteries, are the AC-130U Spooky Gunship and AC-130J Ghostrider fire support aircraft, armed with 105-mm artillery pieces. To date, these are the only aircraft in the world with such powerful artillery weapons installed on board. Also in service with the US Air Force Special Forces aircraft wings are the MQ-9 Reaper reconnaissance and strike drones, CV-22 Osprey tiltrotors, MC-130H Combat Talon II special forces transport aircraft and MC-130J Special Operations refueling aircraft. Commando II.

Of greatest interest is the 24th Special Operations Aviation Wing of the US Air Force, which consists entirely of special tactical squadrons concentrated in two tactical groups: 720th and 724th. Today it is the only special tactical wing in the US Air Force. This is the ground-based component of the US Air Force special operations, the forces that best fit the Russian definition of spetsnaz. That is, the very fighters who run the fastest, jump the farthest, shoot from anything you can shoot from, are trained to survive in various conditions and have a good level of knowledge of first aid, that is, the classic Rimbaud. The total number of personnel of special tactical squadrons is about 2,500 people, of which 1,650 people are in the 24th aviation wing. 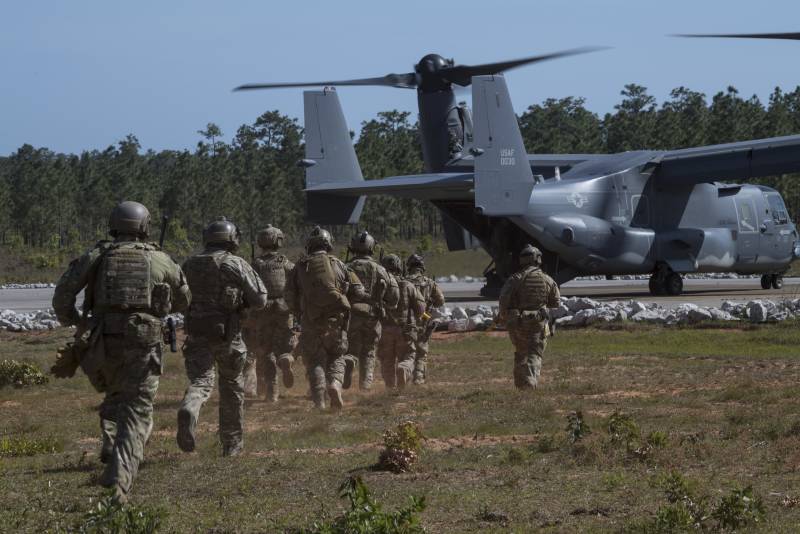 The personnel of these squadrons are well trained, equipped and armed to carry out special missions, primarily facilitating the conduct of air operations over the battlefield. Specialists of these squadrons can be involved in the capture of various airfields and objects of the enemy’s military and civil infrastructure, opening up access for further troop build-up. By capturing and organizing airstrips and sites, they provide an opportunity for attack, maneuvering of troops, and projection of power in the region. Also, soldiers of special tactical squadrons conduct combat search and rescue missions, collect intelligence, work as aircraft controllers, coordinating air support and airstrikes against enemy troops.

Also, these units have highly qualified rescuers and doctors who can be involved in the treatment of personnel and injured military and civilians both during natural and man-made disasters and during hostilities. They are able to quickly plan and carry out an operation to search, rescue, treat and evacuate victims from an emergency or combat zone. 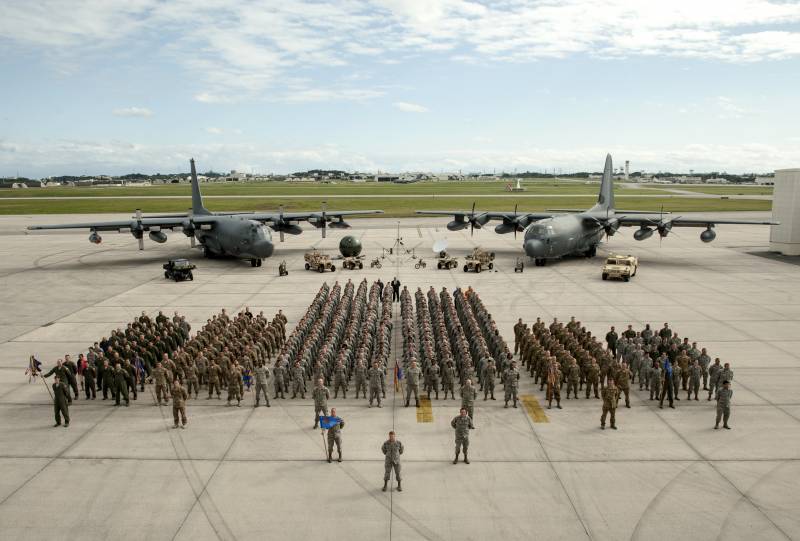 The 352nd Special Operations Wing of the United States Air Force is based at the Royal Air Force base Mildenhall. This base is mainly used today in the interests of the American military. The number of personnel of the unit is approximately 1,100 people. The wing is used for the preparation, training and execution of special operations primarily on European territory. The servicemen of this unit can create and hold landing zones for airborne assault, provide air support for special forces and ground forces with strike aviation, and provide traumatological assistance to the wounded and injured.

The 353rd Air Force Special Operations Group is based in Japan at Kadena Air Force Base in Okinawa Prefecture. It is the only US Air Force special forces unit based in the Pacific Ocean. The number of personnel of the unit is estimated at about 800 people. In recent years, the unit’s military personnel have been actively involved in assisting in the elimination of the consequences of natural disasters. Participated in the aftermath of the devastating Indian Ocean tsunami in 2004 and the strong earthquake and tsunami that struck the east coast of Japan in 2011.