Military affairs at the turn of the eras.
Usually, when it comes to US revolving carbines of the early and mid-19th century, people think of Colt’s revolving rifles. But few people know that at the same time, in addition to him, many other gunsmiths created their own designs, so the struggle for the market for such weapons (and army orders!) Was very acute. Nevertheless, we will begin our story about US revolver rifles and carbines with the Colt rifle, which appeared even earlier than the famous Colt Paterson, which made it famous.

The reason for the appearance of such weapons was again the war, and the war with the Seminole Indians in Florida. Already during the first war of 1817, they showed themselves to be brave warriors, and when the Second Seminole War began in 1835, it turned out that they were also good tactics. Noticing that the American soldiers needed about 20 seconds to reload their rifles, they, having withstood the first volley, immediately attacked the Americans and … killed them in large numbers in hand-to-hand combat. That is why the first version of rifle No. 1 with a ring lever and a 10-shot drum became a real sensation. Its release was carried out in 1837-1841. Various models were produced in caliber from .34 to .44 with a 32-inch octagonal barrel.

Unlike his revolvers, this rifle had an internal trigger. The arrow for cocking the hammer had to be pulled on the ring installed under the cylinder, and then pulled the trigger. Since version # 1 required the shooter to remove the drum to reload, it was quickly replaced with an “improved model” that eliminated this inconvenience. Interestingly, Colt thought not only about the convenience, but also about the beauty of his weapon: for example, a scene was engraved on the top hat depicting a centaur chasing a deer. A year later, Colt introduced the # 2 model with an eight-round .44 (10.9mm) drum. 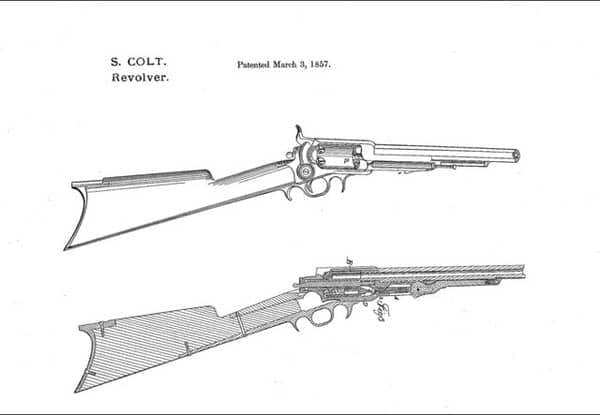 Despite a higher rate of fire than single-shot weapons, the first generation Colt revolver rifles were considered too fragile for military use. In addition, since they were smaller in caliber than muzzle-loading muskets, Colt rifles lacked range and firepower. However, Colonel William Harney ordered fifty ring-lever carbines for his dragoons, which countered the Seminole tactics of rushing at soldiers while reloading their muskets. Harney later remarked: “I am sincerely convinced that if it were not for these weapons, the Indians would still be basking in the Florida Everglades.” As before, the Seminoles, after waiting for the first volley, rushed at the Harney soldiers, but … they met a real wall of fire from shots that followed one after another. After the two above-mentioned models, the 1839 model followed, and then the 1855th. However, the Colt could not eliminate the main drawback of his guns. Although, we note that this drawback was associated not so much with their design as with … with the low culture of users who constantly violated the rules for the operation of Kolt rifles and carbines.

The fact is that at the moment when the bullet left the chamber of the drum and entered the barrel, the powder gases that followed it and did not have an exit through the barrel rushed out through the gap between the barrel and the barrel and, it happened, penetrated into adjacent, shooting, chambers. The shooters were told that after filling the chambers with gunpowder, it is imperative to insert the wad, and in cases where the bullet was installed directly on the gunpowder, do not use defective bullets and must carefully cover the spaces around them with “cannon fat”. But … someone forgot, someone thought that “it will do well,” someone simply did not have the “lubricant”. As a result, the drum burst with very serious consequences, since the left hand of the shooter was just under it. With revolvers, this also happened, but it was not so critical, since they fired from them, holding them in an outstretched hand.

However, Colt was not the only one who had the idea to create a revolving gun at this time! Two brothers, James and John Miller, of Rochester, NY, received a patent for a rotating cylinder, making the Miller patent firearm one of the first “true revolvers” made in America. Already in 1835, they released the first sample of the .40 caliber for seven rounds.

It is known that there are many variations of Miller’s patent, with different manufacturers producing rifles of different lengths, calibers and powers, with drums for four and up to nine rounds. The most common is the seven-shot .40 caliber, a patent for which they received back in 1829. True, unlike Colt’s later and more famous patent, Miller’s drums were not locked automatically, so the shooter was forced to select a new chamber by pressing the characteristic front latch and manually rotating the drum. Interestingly, the rifles created under Miller’s patent used a “tablet lock” ignition system. Instead of capsules, it used beeswax cakes containing a charge of “explosive mercury”, and the shooter inserted such a “cake” into a hole drilled in the cylinder. Rifles based on Miller’s patent were commonly known in the United States as the Billinghurst Rifles, named after their most prolific manufacturer, the famed gunsmith William Billinghurst of Rochester. 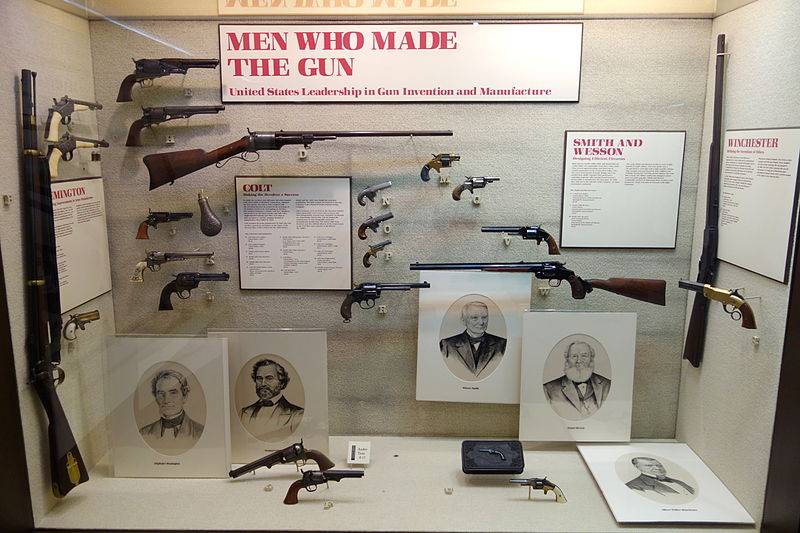 Revolving rifles on display at the Hattington Museum of Art, West Virginia 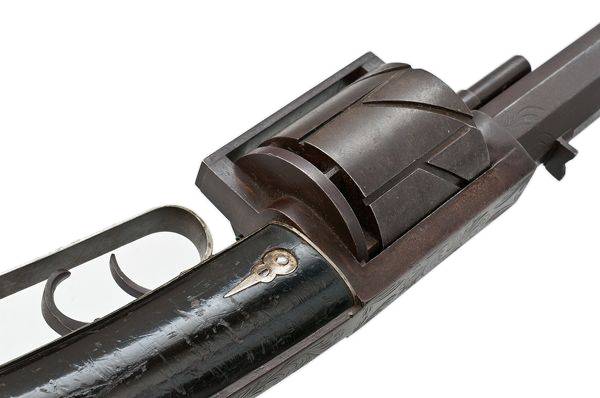 In 1837-1841. in the USA, a .59 caliber rifle with a six-shooter was produced. It was designed by Otis Whittier of Anfield, New Hampshire in 1835, and its drum was also rotated by hand. Two years later, he received a patent for a new “zig-zag” drum, in which the outer grooves on the magazine cylinder allowed it to rotate mechanically. When the shooter squeezed the rear trigger, the inner drummer is cocked, and the cylinder is rotated into position for the shot. By pressing the front trigger, a shot was fired. Whittier’s patent made it possible to create many variants of this design, ranging from revolving guns with a number of chambers in the drum from 8, 9 and up to 10 rounds inclusive. Everyone noted that the Whitier model looks very elegant, especially the models with a 32-inch long barrel going from octagonal to round, and with a dark lacquered stock decorated with German silver inserts in the style of “Kentucky rifles.” 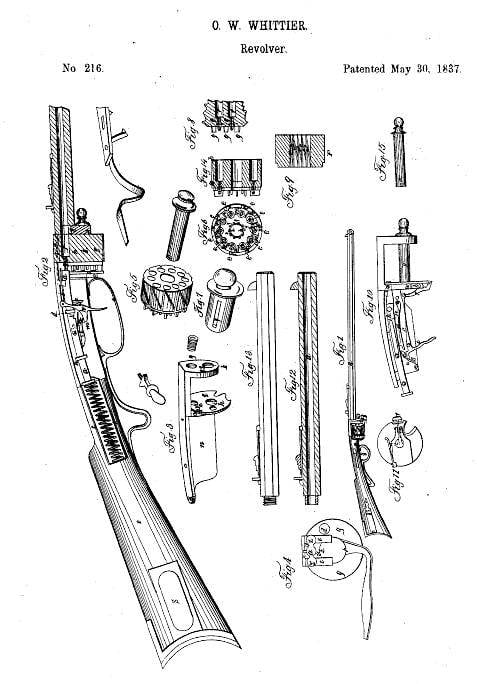 Samuel Colt is believed to have owned a Whittier revolver and even “borrowed” the zig-zag “pattern” on Whittier’s drum for his 1855 Ruth Pocket revolver. However, the most famous descendant of this design was the Vebley-Fosbury self-cocking automatic revolver of 1895. Before disappearing into the fog of history, at his factory in Windsor, Vermont, Whittier produced about a hundred of these beautiful rifles, but … then he died, and everyone simply forgot about his design.

In 1837-1840. in the United States, a .36 caliber rifle with a nine-shooter drum was released – a horizontally located disc designed by New Hampshire inventor John Webster Cochrane. And he was only eighteen years old when he designed it. A few years later, when he went to demonstrate his invention to Europeans, he was approached by an envoy from Turkey. Cochrane traveled to Istanbul, where he made a rifle for the Sultan, who awarded the young “Master of the Gun” a truly royal sum of gold. Back in the United States, Cochrane used the money to fund a number of projects, including the development and production of his rifles, organized by C.B. Allen of Springfield, Massachusetts, in rifle, carbine, and pistol variants.

To load the Cochrane rifle, the shooter had to remove the disc magazine and fill its nine chambers with gunpowder and shot. Capsules were put on brand tubes located on the bottom of the store, and they were protected from damage by a brass disc at the bottom of the frame. The shooter manually turned the magazine and cocked the hammer with a spur on the trigger guard. When the trigger was pulled, the hammer hit from the bottom up and fired. Cochrane’s clever design significantly reduced the likelihood of chain ignition of charges. In total, three modifications of his rifle and one revolver are known.

Cochrane revolver. Its overall dimensions are clearly unsuccessful. The weapon should be flatter …

Cochrane was not only a good engineer, but also a tireless promoter, and constantly participated in firearms exhibitions, and during the exhibition of the American Institute in Niblo Gardens in New York, he fired his rifle 500 times in a row, and without a single misfire or delay. Nevertheless, the need to remove the magazine disk every time to reload, or to carry 2-3 loaded magazines with you, could not but burden the shooters from the Cochrane rifle, which is why, apparently, they did not go.

In 1849-1853. in the United States, a .40 caliber (10.16-mm) revolving rifle with a six-round drum appeared. The gunsmith Daniel Leavitt received a patent for it back in 1837, and its essence was that the drum rotated when the shooter cocked the trigger. At the same time, the front part of Leavitt’s drum also moved towards the barrel, which certainly reduced the likelihood of “chain fire”. After Edwin Wesson made several improvements to this design in 1849, the first Wesson and Leavitt revolvers began to be produced by their newly created Massachusetts Arms Company in Chicopee Falls. Well, the rifle, in fact, was the same revolver, but with a stock and a long barrel. A design feature was the location of the brand tubes at an angle of 45 °. And everything would probably have been good for Wesson and Leavitt, if not for … Samuel Colt, who did not need competitors. He accused them of infringing his patent rights and in 1853 won a high-profile lawsuit against them. The company could no longer recover from such a blow and ceased to exist!