Is the V-22 Osprey tiltrotor easy to fly? I think many would be interested in how such a thing generally keeps in the air. But how do you know? It is unlikely that the US Marine Corps will be so kind as to admit foreign pilots from unfriendly countries to the handle of this car.

Nevertheless, there is some opportunity to look at this miracle of technology through the eyes of a pilot. I was able to find an interesting paper by Scott Trail, defended at the University of Tennessee in May 2006, in which he considered the peculiarities of piloting the V-22 on instruments (instrument meteorological conditions, IMC), that is, in bad weather conditions. This work was written on the basis of a series of test flights and aimed to determine which configuration is best suited for such flights and how easy it is to fly the tiltrotor.

This is, of course, an unofficial test report, but this is fine for us. Basically the article will follow this report.

A little about the tiltrotor

The main feature of the tiltrotor is that its engines are located in two rotary nacelles mounted at the ends of the wings. They can change their position in the range from 0 to 96.3 degrees (that is, 6.3 degrees back from the vertical position). The nacelle tilt has three modes: about 0 degrees – airplane mode, from 1 to 74 degrees – transient mode, and from 74 to 96 degrees – vertical take-off and landing mode.

A tiltrotor can land not only vertically, but also with mileage, like an airplane. In this case, the minimum angle of inclination of the nacelles should be 75 degrees, the chassis is released at a speed of 140 knots, and the maximum landing speed is 100 knots.

The controls of the tiltrotor are generally similar to those of helicopters and aircraft: the handle that controls the pitch and roll, the turn pedals (unlike the helicopter, they control the turn of the rudders), the engine thrust handle for the left hand. The position of the engine nacelles is controlled by a wheel mounted on the thrust handle under the thumb of the left hand. This is exactly what is not on the plane or on the helicopter. 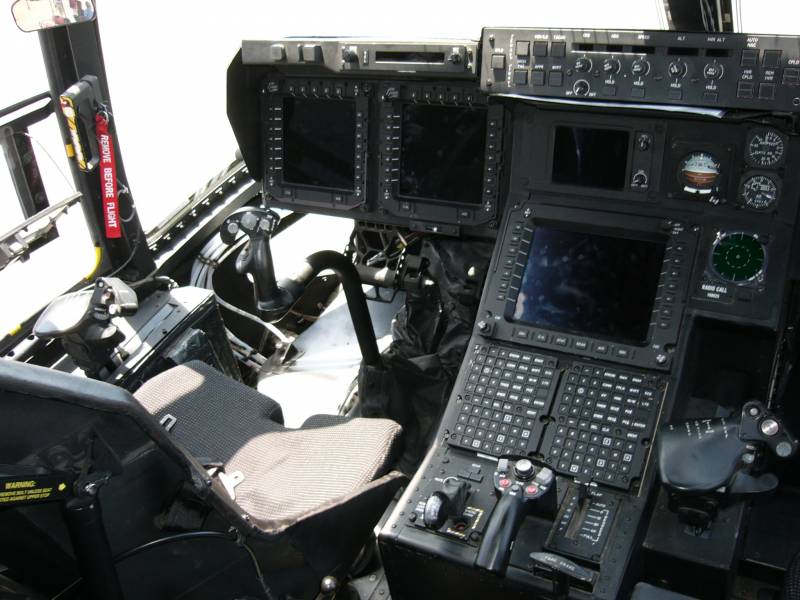 Tiltrotor cockpit. On the left, under the red ribbon, is the traction control handle, on which you can see the white wheel that controls the angle of rotation of the engine nacelles

The tiltrotor has an automatic control system that constantly maintains the stabilization of the tiltrotor’s position in flight.

How does he behave in different flight modes?

Transition mode, nacelle position 30 degrees, speed 150 knots – the controls are the same as in airplane mode, but Trail noted a noticeable vibration and climb of about 30 feet when cornering.

Transient mode, nacelle position 45 degrees, speed 130 knots – vibration increased, but did not affect control; on the other hand, the tiltrotor became less predictable, the speed fluctuated between less than 2 and more than 4 knots from the desired, and the altitude varied from a descent of 20 and an ascent of 60 feet.

Helicopter mode, nacelle position 75 degrees, speed 80 knots – the tiltrotor is more controllable and more sensitive, less deviates from the desired flight parameters (speed within 2 knots, heading within 2 degrees, altitude within 10 feet), however, in this mode it occurs strong sliding.

There are other interesting features of piloting as well. It turned out that the tiltrotor climbs and descends the fastest when the nacelles are in 45 degrees: when climbing – 200-240 feet per minute, while descending from 200 to 400 feet per minute. But piloting a tiltrotor is difficult, more experience is required than in other flight modes. The V-22 can climb and descend even faster, up to 1000 feet per minute, with the pilot requiring the assistance of the commander. 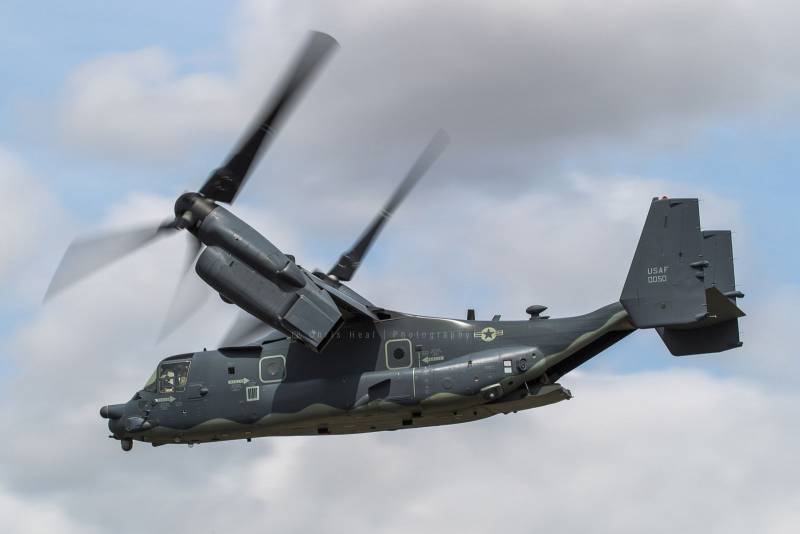 It turned out to be difficult to find a photo of the flight in the transient mode. In this photo, the nacelle angle (by eye) is about 45 degrees.

During the tests, several more instrument flight modes were worked out, in particular, an approach and an unsuccessful landing approach with the loss of one engine (in the experiments, it was simulated by limiting the thrust to 60% of the maximum).

A landing approach from airplane mode presents some challenges for the pilot, who must keep track of the altitude, course, speed and angle of the nacelles and respond to changes as the nacelles change, especially when the angle is 30 degrees. With a nacelle angle of 30 degrees and a speed of 150 knots, the landing gear cannot yet be extended, so the pilot needs to quickly raise the nacelles to an angle of 75 degrees and slow down to 100 knots. At this moment, a slip occurs and it is necessary to keep the tiltrotor on the course, as well as to compensate for the lift of the car, which occurs when the nacelle angles are from 30 to 45 degrees. After entering helicopter mode, the pilot needs to raise the nose and increase the thrust to maximum to reduce the descent rate. 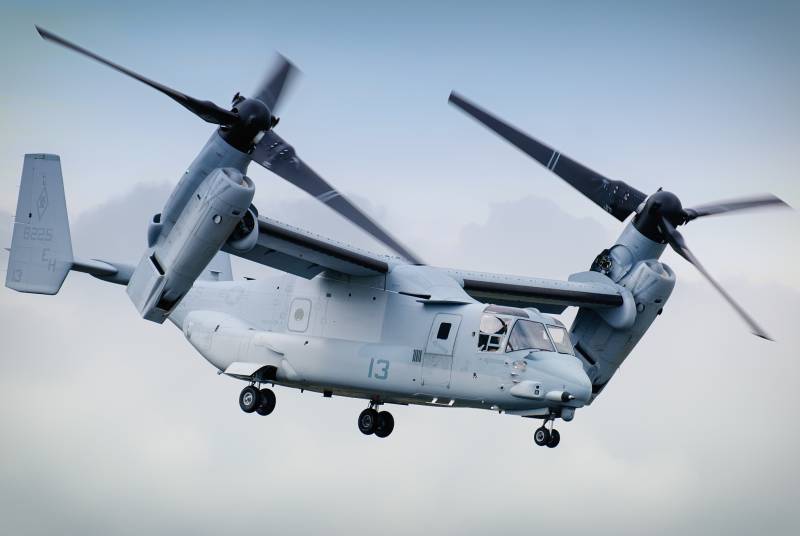 The pilot can, on the approach, move the nacelles to 61 degrees at 110 knots, with the tiltrotor gaining 50 to 80 feet of altitude and 10 knots more desirable. Lateral vibration also occurs, which distracts the pilot. However, in this configuration, the tiltrotor is easier to control, more stable and maintains a speed within 2-3 knots of the desired. The sink rate is well controlled by the thrust. From this configuration, it is easiest to go to the landing configuration, for which it is enough to drop 10 knots and raise the nacelles by 14 degrees.

It is also possible to move the nacelles to 75 degrees in flight and begin the approach at 80 knots. In this case, the tiltrotor can spontaneously deviate from the course by 1-2 degrees, which must be compensated. This configuration allows for a more accurate landing and landing point selection.

In case of an unsuccessful landing approach with the loss of one engine, the pilot should immediately move the nacelles to the 0 degree position (the initial positions of the nacelles of 30 and 45 degrees were worked out), in which case the tiltrotor will lose 200 feet of altitude. Ascent is possible only when switching to airplane mode. With the initial configuration of nacelles of 61 degrees, the transition to airplane mode in the event of a failed landing approach becomes very difficult, since the tiltrotor becomes sensitive to changes in the angle of the nacelles. The pilot must move the nacelles very carefully so as not to accelerate the descent, and this maneuver requires a distance of at least 8 miles; during the maneuver the vehicle loses 250 feet of altitude

As far as can be judged from the description of tiltrotor control, the main difficulty lies in the fact that the pilot needs not only to be able to fly in an airplane and in a helicopter, in simple words, but also to switch from one piloting mode to another in a timely manner when the position of the nacelles changes, and also exert more effort when piloting in transient modes, especially at a nacelle angle of 75 degrees, when the tiltrotor becomes stiff in handling and acquires a tendency to slip.

In some places, the tiltrotor is illogical in management. For the most part, pilots fly it in airplane mode, but the fact that when approaching and switching to a helicopter configuration it is necessary to give full thrust, while an airplane requires tidying up thrust during landing, it requires some skill and habit for pilots.

Each car has its own advantages and disadvantages. The disadvantages of the tiltrotor include the fact that it has almost no autorotation in helicopter mode (it is, but bad: the descent rate for autorotation is 5000 fpm), which significantly facilitates helicopter piloting. However, the tiltrotor has wings with their lift and gliding ability (aerodynamic quality – 4.5, with a descent rate of 3500 fpm at a speed of 170 knots), in combination with different nacelle angles, this can give interesting effects like simultaneous climb and speed with the nacelle position at 45 degrees. An experienced pilot can vary the flight modes by changing the nacelle tilt angle (maximum 8 degrees per second, that is, a full turn from 0 to 96 degrees takes 12 seconds). For example, the transfer of nacelles from 30 to 45 degrees occurs almost instantly, in a little over a second, and this mode allows you to sharply gain altitude and speed, which can be used, for example, when dodging shelling from the ground. 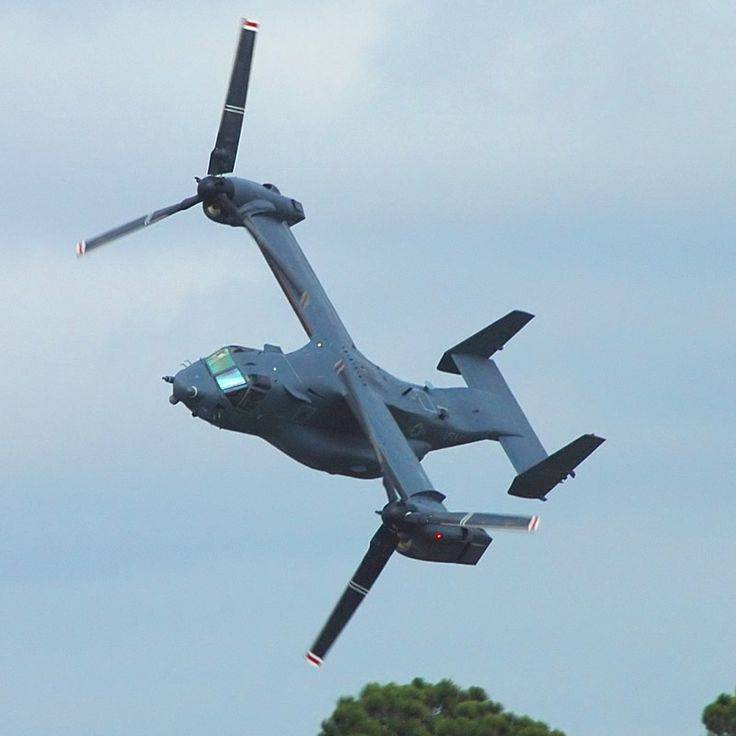 In airplane mode, you can also turn

In general, for an experienced pilot, this is a very good car with additional capabilities that both the aircraft and the helicopter lack. But for a beginner, this is a difficult machine. To pilot this miracle of technology, of course, you can learn. However, this requires longer training (the US Marine Corps curriculum has 180 days for pilot training) and the flight requires more pilot attention.