The last months have passed under the banner of jubilation of Azerbaijan and its Turkish ally. The Israelis have no less reason to be proud, whose UAVs in Nagorno-Karabakh once again proved their high efficiency. But if for the Jewish state and Ilham Aliyev the situation is developing exceptionally well, for Turkey the latest successes may turn out to be a “swan song”.

This is not about the country as a whole, but specifically about its armed forces and the capabilities of the Turkish military-industrial complex. The problems of which are being increasingly paid attention to lately. At the moment, they will in no way affect the foreign policy activity of Recep Tayyip Erdogan: he, as before, will actively (and rather aggressively) defend national interests. And there is almost no doubt that, given the ideological and political problems in the West (which with a high degree of probability will only grow), no one will really dare to confront him. However, already now, the difficulties that have appeared in Turkey, “thanks” to the actions of its leader, are gradually making themselves felt.

UAVs of the Bayraktar family

It will not be a big exaggeration to say that Turkish Bayraktars have become a symbol of victory over Armenia. These relatively simple (by modern standards) UAVs turned out to be the real “killers” of old Soviet tanks and anti-aircraft missile systems of the Cold War era.

Thanks to laser-guided UMTAS missiles and MAM-C and MAM-L corrected gliding bombs, the device can hit both stationary and moving targets. The range of target destruction – up to eight kilometers – brings Bayraktar TB2 closer to modern attack helicopters in anti-tank capabilities, although so far the rotorcraft are doing their job better than UAVs. At least in the presence of modern missiles, such as the AGM-114L Hellfire, where the principle of “fire and forget” is implemented.

Importantly, the project is developing. Recently there were photos of a new version of Bayraktar – TV2S – with a satellite control system. The new version features an eye-catching “hump” that the regular version does not have. The applied radio control system imposes significant restrictions on the range (approximately 150 kilometers). In the case of TV2S, it can become practically “unlimited”. 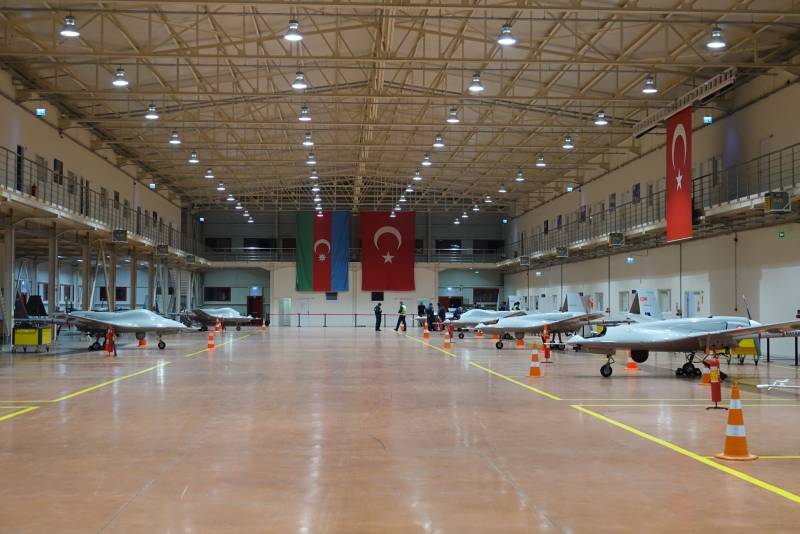 It would seem that there are no problems, and the future of the project is cloudless. Recently, however, the blog of the Center for Analysis of Strategies and Technologies drew attention to an important aspect of the Turkish drone program – the critical dependence on Western technology. It is known that the device is equipped with the Austrian Rotax 912 engine, as well as Western electronics. Due to the use of UAV data in the war in Karabakh, the Rotax-owned Bombardier Recreational Products corporation announced the termination of the supply of engines.

TAI, Turkey’s leading aerospace engine company, is currently developing a 170 horsepower PD-170 that could be fitted to the Bayraktar. However, this engine is still at an experimental stage. And what will happen to the project next is unknown.

Problems with TB2 are just the tip of the iceberg for the Turkish defense industry. Even more serious is the lack of the latest fighters.

Recall that for many years Turkey remained an active participant in the development program for the fifth generation F-35 fighter. The contradictions between Erdogan and the West led to talks about the withdrawal of the Turks from the program. At first, they were perceived as a childish joke or an innocent game. However, the situation gradually began to acquire a threatening character, and the position of the United States became more and more decisive.

The Americans called the purchase of Russian S-400 anti-aircraft missile systems by Turkey as a formal reason for refusing to supply the F-35: the contract for the purchase of one hundred fighters was canceled in 2019. In July of this year, the US Air Force bought out eight F-35A destined for Turkey, which de facto put an end to Turkish participation in the program. At least for now. 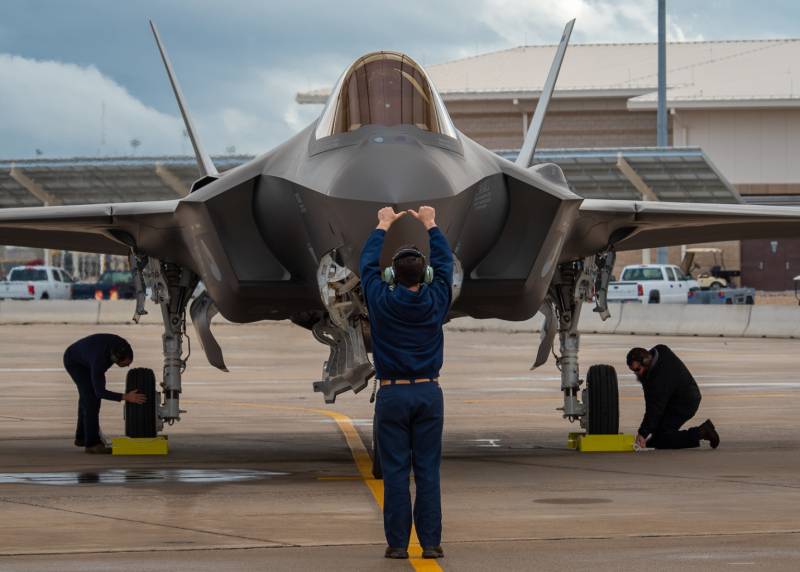 Officially, Turkey is still continuing the development of the national fighter TF-X (Turkish Fighter-X), the layout of which was shown to us at the exhibition in Le Bourget in 2019. However, one must understand that in conditions of tense relations with the West, this is a road to nowhere. In fact, now, due to this project, the country’s authorities are trying to divert attention from the real problems of the military-industrial complex.

It should also be remembered that Turkey has never produced its own fighters, so developing a fifth generation fighter would be an extremely difficult task for it, even if it had good relations with the West. As, however, for any other country, except perhaps South Korea with its KAI KF-X program – a transitional link between the fourth and fifth generations. 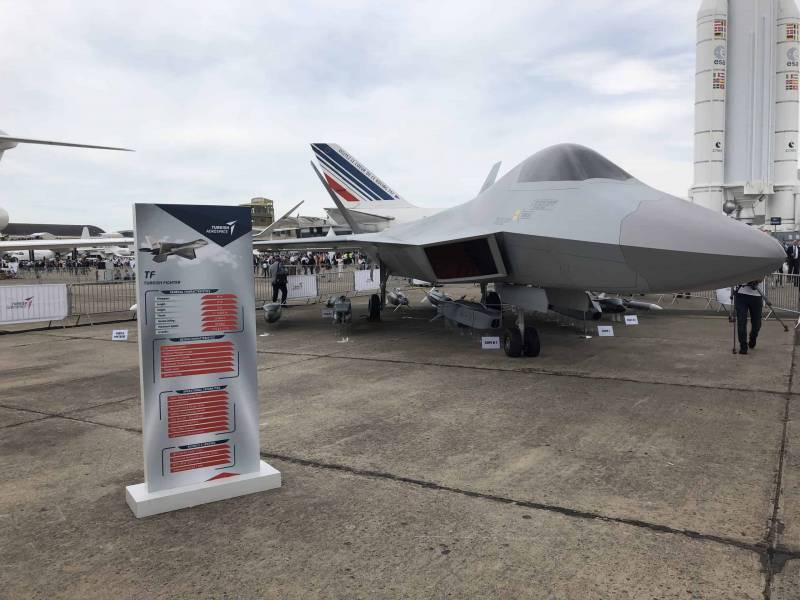 In 2017, British Rolls-Royce and Turkey’s Kale Group signed a joint venture agreement to develop an engine for a new aircraft. The contract was frozen last year. The formal reason is problems with intellectual property rights.

Now the basis of the Turkish Air Force is more than 150 F-16C Block 50 fighters. These aircraft are rapidly becoming obsolete, and if Turkey does not take decisive steps in the future to replace them (we are not talking about the national “five”), it risks finding itself without a modern Air Force at all.

This year, Turkish Aerospace Industries held a closed presentation of the model of the promising T629 attack helicopter. It will have to occupy a niche between the light T129 based on the Agusta A129 Mangusta and the promising ATAK 2 helicopter – a conditional analogue of the Apache. 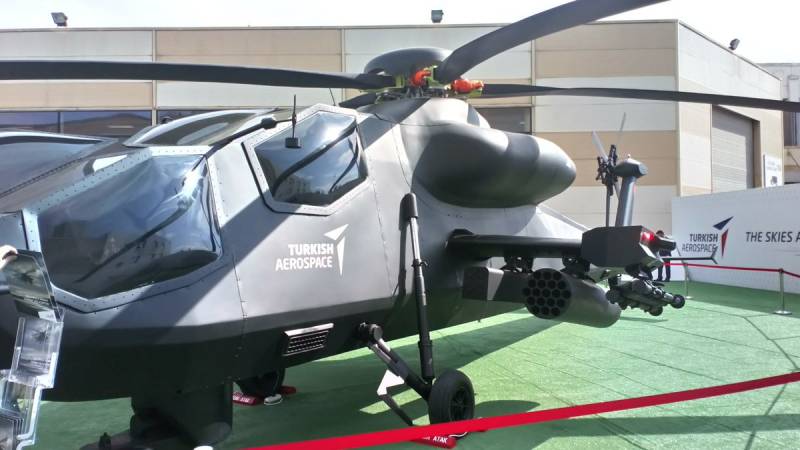 Due to the current state of affairs, the prospects for the new product are extremely ambiguous. Even the adopted T129s are dependent on the Americans: they use the CTS-800A engines produced by a joint venture between the American Honeywell and Rolls-Royce. Earlier, the Americans banned the re-export of the CTS-800A to other countries, which put an end to the export opportunities of the T129.

At the same time, the Turks are actively continuing work on the aforementioned ATAK 2. It should have a takeoff weight of about 10 tons and be equipped with a cabin with a tandem crew. They want to use the promising TS1400 as the engine, which the Turkish Tusas Engine Industries (TEI) is creating together with General Electric. According to experts, the complexity of the product will make the tests at least very long. The first flight of ATAK 2, as previously noted, should be made in 2024. Most likely it will be rescheduled.

For the foreseeable future, the Turkish armed forces will have to be content with fifty previously built T129s. These machines cannot yet be called morally aged, but they are rapidly becoming obsolete, and there is no real alternative to them at this stage. 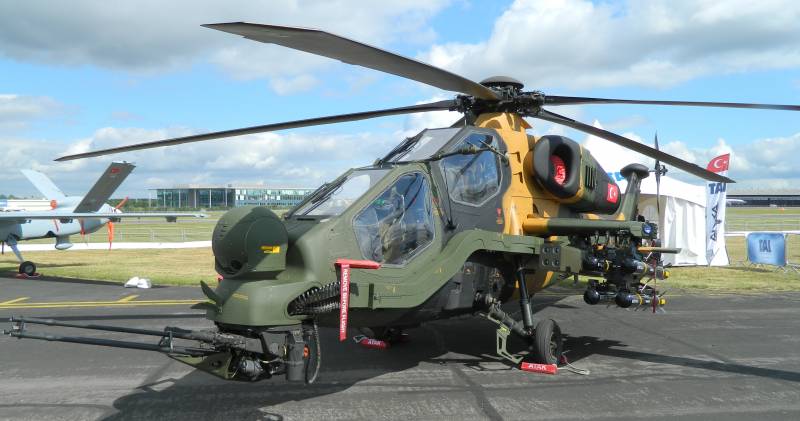 In general, the Turkish defense-industrial complex, despite obvious local successes, found itself in de facto isolation. This primarily concerns fighters and UAVs.

This is the price to pay for foreign policy ambitions.