Currently, the US Navy’s surface forces are based on numerous Arleigh Burke-class destroyers. As a supplement to them, they were going to build newer and more advanced destroyers Zumwalt, but these plans had to be reduced to a minimum. Now the naval forces are going to develop a new destroyer with an eye to the distant future. So far, this project is known under the working designations DDG-X or DDG Next.

The need for a new

Arleigh Burke-class destroyers have been in service since the early nineties and have undergone upgrades several times. Such ships remain in serial production, and their service will continue in the second half of the century. However, by now the modernization potential of the structure has come to an end. The introduction of fundamentally new systems and weapons is no longer possible.

In the recent past, an attempt was made to create a new project Zumwalt, but it was unsuccessful. Due to the excessive complexity and high cost, the series was reduced to three ships. Two of these destroyers have already begun service, and the third is expected to be accepted.

The failure of the Zumwalt project led to the need to create another promising destroyer. Plans of this kind have been included in the promising shipbuilding program, and their implementation has already begun. It is known that specialists of the naval forces and shipbuilding enterprises are now working on the possible appearance of the future destroyer. 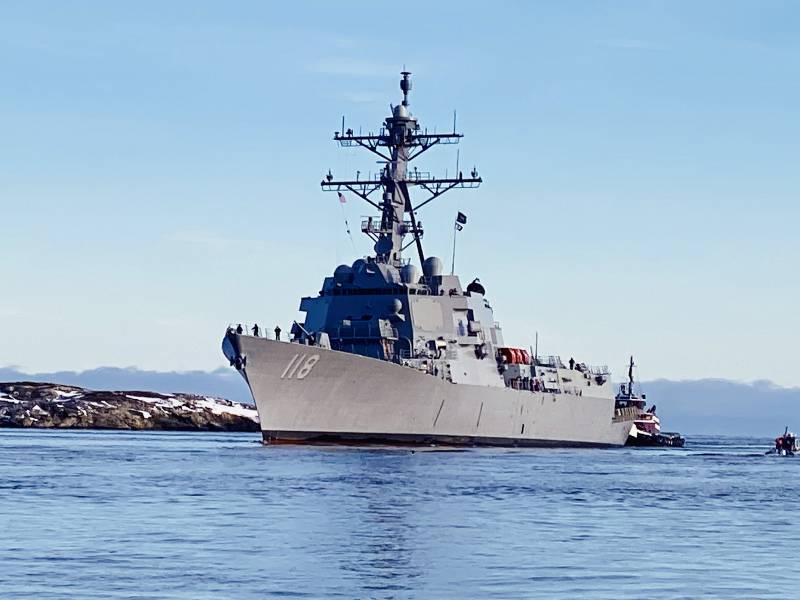 Project DDG-X has been the topic of news multiple times in recent months. Officials have several times disclosed certain plans and considerations, although so far they have dispensed with special details of a technical or other nature. Such statements allow us to imagine what a destroyer could be that meets the current desires and requirements.

The general requirements for DDG-X are fairly simple. The Navy wants to get a destroyer with increased rocket ammunition, advanced electronic weapons, a modern type of power plant, etc. All this will make it possible to create a ship that is superior in its characteristics to the serial “Arlie Burke”, but at the same time to reduce the cost of construction relative to the Zumwalt.

What the future DDG Next will look like, and what its architecture will turn out to be, has not yet been specified. At the same time, it is mentioned that such a ship will receive a completely new hull, due to which it will be larger than the current destroyers. “Arlie Burke” of the late series have a length of 155 m and a total displacement of more than 9.6 thousand tons. The new DDG-X may be larger and heavier – but the Zumwalt project will not be brought up to 16 thousand tons. Due to the growth in size, it is planned to provide sufficient volumes to accommodate the desired complex of weapons.

The issue of stealth technology has not yet been openly raised. However, the trends in the development of American shipbuilding suggest that the DDG Next project will take all measures to reduce visibility in all spectra. Thus, the exterior of the destroyer can be composed of many intersecting planes, as was the case in several modern projects. 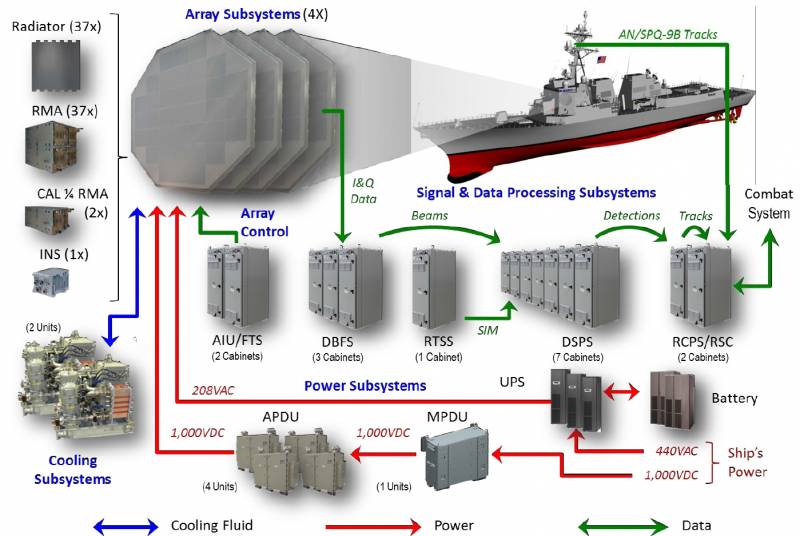 The composition of the AN / SPY-6 radar complex

The possibility of using a modular architecture is being considered. Due to this, it will be possible to simplify the preparation of the destroyer for a specific mission, as well as to accelerate the modernization. The Navy wants to ensure the longest possible operation of new ships, and a modular approach will help solve this problem.

The newest destroyers are adopting an integrated power system architecture. Main engines with high power generators will generate electricity for all consumers, incl. propulsion engines and electronic systems. It is assumed that such a power engineering architecture will ensure the operation of the ship’s standard facilities, as well as create a performance margin for further upgrades. With all this, it is necessary to increase the efficiency of the power plant.

Modern destroyers have developed and effective electronic means for monitoring the surrounding space, searching for targets and controlling fire. Ships with the Aegis BMD combat information and control system and accompanying instruments and weapons are even capable of tracking close space. Apparently, DDG-X destroyers will receive even more advanced electronic weapons with an increase in all basic characteristics.

The Arleigh Burke and Zumwalt projects provide for the use of the versatile Mk 41 vertical launchers, compatible with a number of missile types. Obviously, this approach is also used in the new DDG Next project. By increasing the body, the number of cells can be increased. In addition, in the future, the creation of hypersonic missiles is expected, which will certainly be included in the ammunition load of the new destroyer. 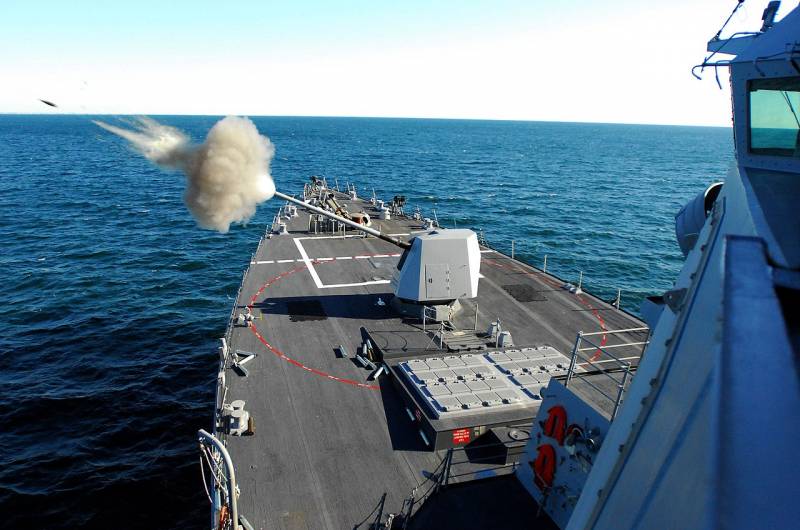 It is likely that DDG-X will retain the artillery installation, but the prospects for this direction are unclear. Cash destroyers are equipped with “normal” guns; it is planned to create fundamentally new systems with an ultra-long-range guided projectile. Perhaps, before the start of the construction of new ships, it will be possible to complete work on promising artillery.

In the coming years, the Navy and shipbuilding organizations must carry out the necessary research and start designing. The defense budget already provides funding for such events. So, in FY2021. $ 46.5 million will be spent on the DDG-X program. In the future, an increase in annual expenses associated with the most complex work is expected.

The construction of the lead destroyer is planned to begin in 2025. The timing of its completion has not yet been specified; the ship will probably be put out for testing no earlier than the end of the decade. The expected cost is no more than $ 2.5 billion. At the same time, an increase in costs, at least for the project’s lead ship, cannot be ruled out. However, in this case, DDG Next will be simpler and cheaper than the overly expensive destroyer Zumwalt – this program cost $ 22 billion and yielded only three ships.

Serial ships will be laid not earlier than the end of the decade. Accordingly, even in the absence of production problems, destroyers will enter the fleet only by the mid-thirties. It will also take a lot of time to create a sufficiently large grouping of such ships, capable of exerting a noticeable influence on the Navy as a whole. This is likely to happen no earlier than 2040. 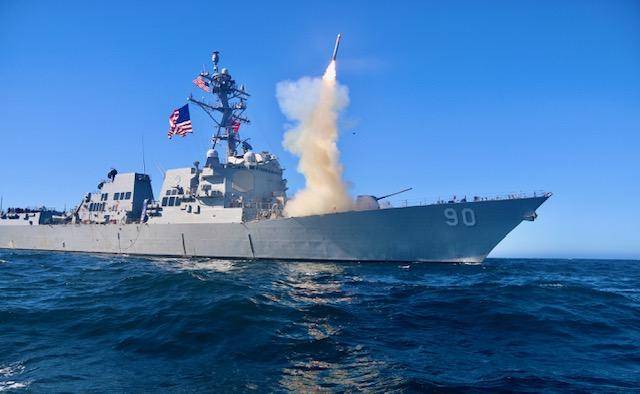 Tomahawk Block V rocket tests, November 2020 The launch is carried out by the USS Chaffee (DDG-90)

Ships of the future

With the help of the new DDG-X destroyer project, the American fleet plans to solve several problems. The first is to create a reserve for the quantitative growth of surface forces. The previous destroyer construction program ended in failure, but the Navy still needs a new project of this class. The second challenge concerns the quantitative indicators of the fleet. The new destroyers will help increase the total number of ships to the required number.

The third task of the new project is directly related to the two previous ones. The US military and political leadership is constantly talking about confrontation with Russia and China in all areas. To confront the two powers at sea requires a large and developed fleet. In the current state of the US Navy, it meets such a task, but in the future the situation will change, and the Pentagon will have to strengthen its fleet.

Whether it will be possible to bring the new destroyers to a large series depends on the customer’s requirements and the complexity of the project. The events of past years have clearly shown what overly bold plans and demands lead to. The Navy is well aware of this, and is shaping the look of the new DDG-X taking into account the complexity, realism, cost and timing of work.

According to current plans, the first stages of work on the new destroyer will take several years, and a full-fledged series will begin only in the distant future. The US Navy still has a substantial amount of time to complete all the necessary activities. But this time must be disposed of wisely so that the new destroyer does not repeat the sad fate of the previous one. Otherwise, the naval forces in the future will face even more serious problems, and they will have to be solved without having enough time.