The TT pistol is one of the symbols of domestic small arms. Perhaps it is for this reason that the debate about how Fyodor Vasilyevich Tokarev borrowed the ideas of other designers during its development is of such concern to the public today. Without taking into account how much the TT pistol was from the Browning pistol models, this model of small arms successfully entered Russian history, becoming the first serial army self-loading pistol in the USSR. The pistol was put into service in 1930 and was mass-produced until 1953, the total production volume was 1 million 740 thousand copies.

Prerequisites for the creation of the TT pistol

By the time of the collapse of the Russian Empire and the emergence of the Soviet Union, the country got a scattered arsenal of short-barreled firearms, represented by pistols and revolvers from many countries of the world. The Nagant revolver remained the standard and most massive army short-barreled weapon. It was obvious that this weapon was already obsolete. They wanted to change the revolver for a self-loading pistol even before the outbreak of the First World War, but these plans were never implemented. The war, the revolution that followed it, and then the civil war in Russia seriously postponed the timeline for the creation of a domestic army self-loading pistol.

The pistol, which went down in the history of small arms under the abbreviation TT (Tula Tokarev), was developed for a competition announced in 1929. The competition for a new army pistol was just supposed to find a replacement for the famous revolver “Nagant”, as well as a number of models of self-loading pistols of a foreign model, which continued to remain in service with the Red Army by the end of the 1920s. 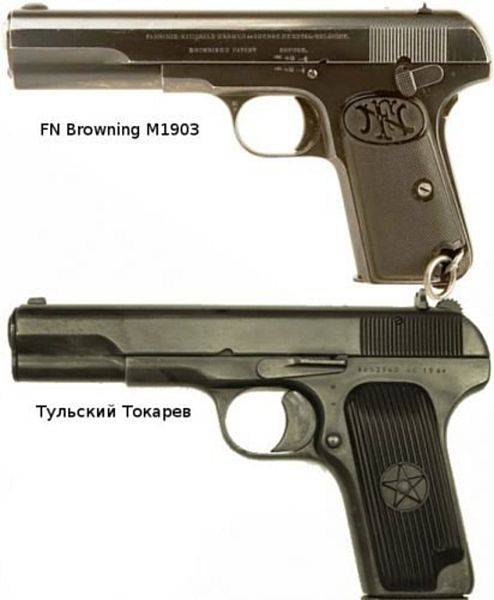 It is worth noting that in the Russian Empire and in the USSR, the products of designer John Browning had many connoisseurs. At one time, the tsarist government in 1916 issued an order in the United States for the supply of 100 thousand Colt M1911 pistols and 5 million cartridges for them. By January 1917, the country had received at least 47,000 of these pistols. Even earlier, another Browning pistol Browning M1903, which was purchased for the police and the Separate Corps of Gendarmes, received distribution in Russia. In addition to them, the self-loading German Mauser C96 pistol, which is an indispensable attribute of many feature films about the civil war in Russia, was also widely used in the USSR.

The pistol, which received the laconic name TT, was created by Fyodor Tokarev in the design bureau of the Tula Arms Plant. The main cartridge for the new pistol was the German Mauser cartridge 7.63×25 mm. This ammunition was purchased in fairly large volumes, such cartridges were used with the Mauser C96 pistols in service. In the USSR, on the basis of this cartridge, they created their own 7.62×25 mm ammunition, which was interchangeable with the Mauser cartridge. In 1930, after the adoption of the TT pistol, the Soviet Union acquired a license from the Germans for the serial production of this cartridge. The same cartridge was planned to be used with all submachine guns developed in the country. When choosing a cartridge, common pragmatism and economy won, which were achieved by unifying a single caliber for rifles, submachine guns and pistols. In particular, for the production of barrels, it was possible to use the same machine tools and instrumentation and tools.

What the TT pistol has in common with Browning pistols

Structurally, and externally, the TT resembled several John Browning pistols at once, and there was nothing strange about that. By that time, Browning had created one of the most popular self-loading pistols in history, and in the USSR, pistols of his system were in use and were available in commercial quantities. It was foolish to ignore the successful model, especially in the situation in which the Soviet Union and its industry were in the late 1920s and early 1930s. 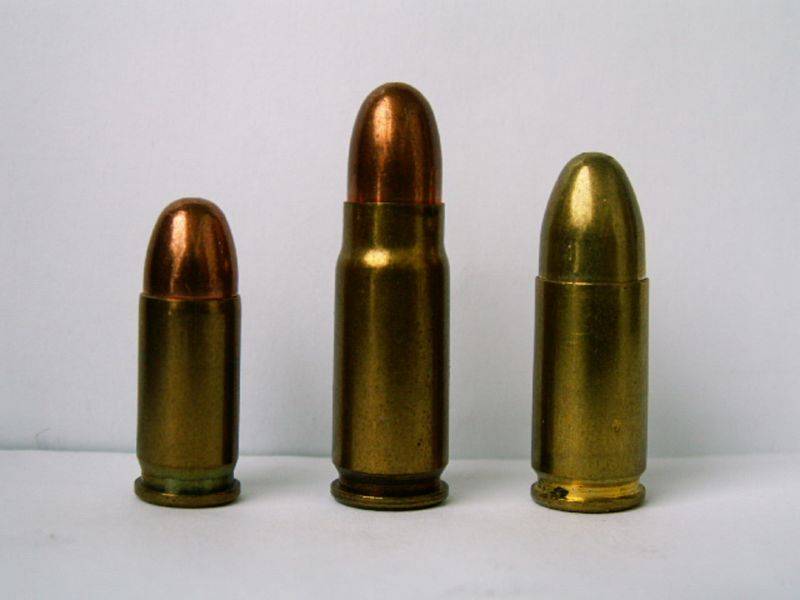 The first domestic serial army self-loading pistol TT, created in Tula, was officially adopted under the designation “7.62-mm self-loading pistol mod. 1930 “, successfully combined the design and layout of the Browning M1903 pistol, the Browning barrel locking scheme implemented in the Colt M1911, and the German 7.63×25 mm Mauser cartridge. Some domestic experts express the opinion that initially the designers even had the task of copying a modified John Browning pistol with a detachable trigger trigger. True, already in the process of work, they refused to completely and blindly copy the pistol due to the lack of the necessary technological base in the young Soviet republic for the serial production of such a model. The designers were faced with the task of reducing the cost of producing a pistol and simplifying the design as much as possible. Fedor Vasilyevich successfully coped with this task.

Structurally, Tula Tokarev resembled the Colt M1911 self-loading pistol, developed by John Moses Browning in 1908. In both TT and M1911, the automatics operated due to recoil with a short barrel stroke. The Browning locking system at that time was considered the simplest and most suitable for use in all models of compact weapons. Unlocking and locking the barrel of the TT pistol occurs by lowering and raising the breech, which swings on a special earring. On the trunk of Tula Tokarev, two annular lugs were made, which mated with the inner surface of the shutter-casing. The shutter-casing of the self-loading pistol itself was supplied with internal grooves, with which the shutter slides along the guides of the frame. The return spring is installed under the barrel of the TT pistol, a guide rod was inserted into its rear end. The magazine of the pistol, designed for 8 rounds of 7.62×25 mm, is held in the frame of the handle by a push-button latch. This is where the similarities to the Colt M1911 end. At the same time, all of the listed elements have been modified to simplify production as much as possible. 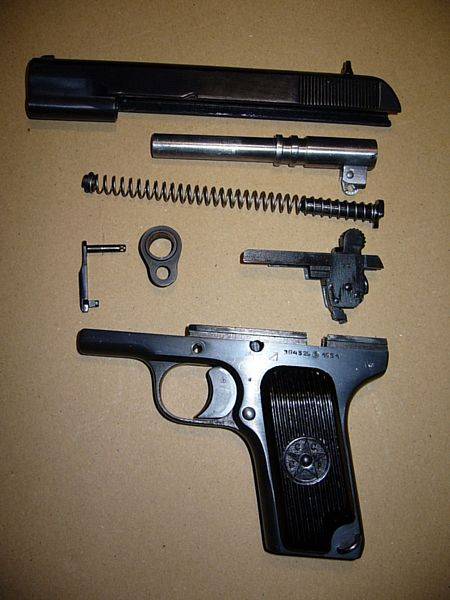 Incomplete disassembly of the TT pistol 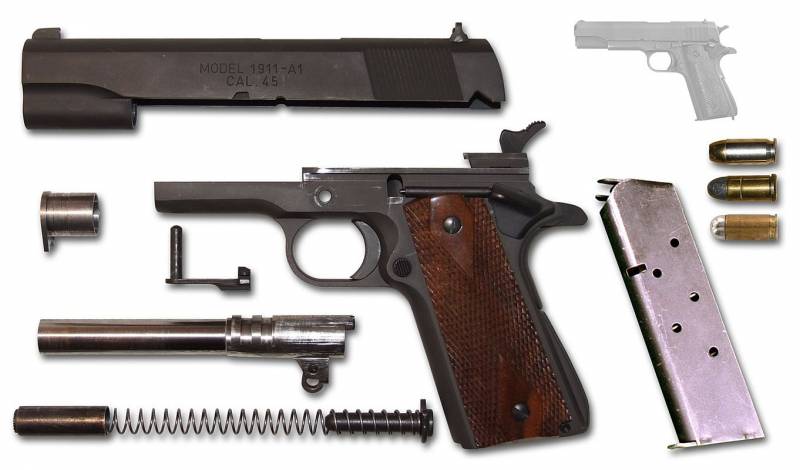 At the same time, obviously original design solutions were implemented in the TT pistol, aimed at maximizing the convenience of handling the pistol. These solutions included the combination of the firing mechanism (USM) in a single separate block-block. When disassembling the pistol, this unit was freely separated from the frame, after which it could be easily lubricated and cleaned. Placing the mainspring in the trigger allowed Tokarev to reduce the longitudinal width of the handle. Fastening the grip cheeks with rotary bars fixed to them simplified the process of disassembling the weapon. Also, a distinctive feature of the TT, which simplified the pistol, was the absence of a safety mechanism, the function of which was performed by the safety cocking of the trigger.

The Soviet designer also took into account the well-known drawback of the Colt pistol: it was about the occurrence of delays in firing when the upper part of the store was damaged. The presence of guides for feeding the cartridge in the TT pistol in the USM block made the power supply system of the self-loading pistol from Tula less sensitive to the appearance of bends or dents on the magazine case.

True, not all the simplifications went to Tokarev’s pistol. In TT, the trigger played the role of a fuse, which could be put on a “safety platoon”. As conceived by the designer, this was to completely exclude the possibility of a shot when the pistol falls or is hit. In practice, however, this was a sore spot in the pistol. Putting the trigger on the safety half-cocking led to excess tension in the mainspring, which was the reason for its rapid wear. At a critical moment, this could lead to a misfire. The wear of the trigger parts was often the reason for accidental shots. As the army and the NKVD troops were saturated with a new pistol, the number of accidents increased, which led to the release of a special instruction that prohibited carrying TT self-loading pistols with a cartridge in the chamber. 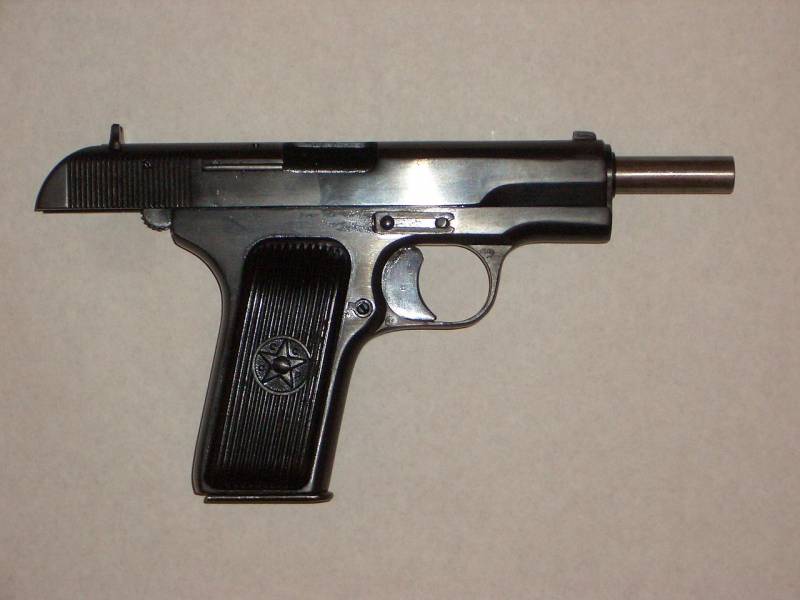 The external similarity of the TT with the budget models of Browning pistols was quite strong. The Tula pistol had practically no protruding parts, with the exception of the slide delay. The simple shape of the handle with ebony overlays also resembled the 1903 Browning. The simplicity of the Soviet self-loading pistol had obvious advantages. The model turned out to be very compact and lightweight for a relatively powerful cartridge. More importantly, the pistol was narrow, allowing it to be used for concealed carry. The TT pistol could easily be hidden behind a belt or even in a sleeve. The length of Tula Tokarev was 195 mm, barrel length – 116 mm, height – 120 mm, width – 28 mm. The mass of the pistol without cartridges was only 825 grams, with cartridges – 910 grams.

Instead of an afterword

The TT pistol still remains one of the symbols of our small arms industry, which is due to the good tactical and technical characteristics of this model. While creating this self-loading pistol, Tokarev did not think about the fact that, after almost 100 years, someone would seriously discuss, sitting on the couch, how similar a pistol from Tula was to Browning pistols. His task was to adapt the best world practices to Soviet realities, presenting the country with a simple, reliable and inexpensive weapon with good characteristics. The designer brilliantly coped with this task. By the way, in tsarist Russia, they could not launch their self-loading pistol into mass production, and in the USSR, despite all the difficulties, the new weapon went en masse to the troops.

In general, for the Soviet industry in the early 1930s, there was nothing shameful in copying and subsequent mass reproduction of its own analogues of the best foreign models of weapons, equipment, engines. This applied to everything from tanks to cars and from aircraft engines to batteries. Building its industry practically from scratch, the Soviet Union at the initial stage could rely only on this path of development. 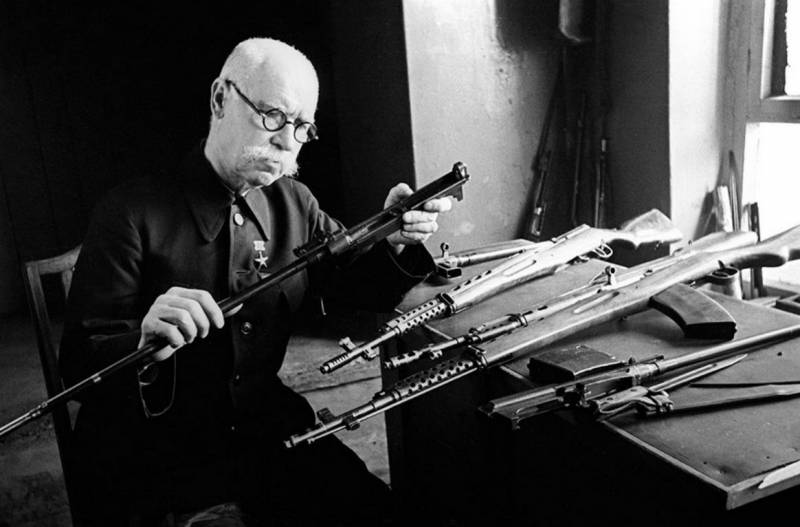 This does not in the least detract from the merits of our outstanding weapons designer Fyodor Vasilyevich Tokarev, who created the first domestic army self-loading pistol, which was successfully launched into mass production. Tokarev proved his outstanding design qualities with many projects, for example, the famous SVT self-loading rifles, which by the beginning of World War II had no analogues at all. Captured SVT-40s were highly appreciated by both German and Finnish soldiers. In Germany, rifles were officially adopted, and German designers borrowed the successful SVT-40 propellant gas evacuation system for their Gewehr 43 self-loading rifle, created already during World War II.