Photo of the plant named after V. A. Degtyarev

On July 1, 2020, RIA Novosti, citing its sources in the Russian military-industrial complex, reported that in Kovrov, at the famous plant named after Degtyarev (ZiD), the process of mass production of a new Russian machine gun A-545 (index GRAU 6P67) had begun. This 5.45-mm machine gun was developed in Kovrov as part of work on the creation of small arms for the Russian military equipment “Ratnik”.

Kovrov assault rifles A-545 and A-762 (chambered for 7.62×39 mm) are often called competitors for the AK-12 and AK-15. However, the Izhevsk and Kovrov submachine guns have different specializations, each of them has its own niche in the Russian armed forces. If “Kalashnikov” traditionally remains the main small arms of linear units, then automatic rifles from Kovrov are intended primarily for arming soldiers of army special forces and special services.

In Kovrov, new machines chambered for 5.45-mm and 7.62-mm caliber cartridges are called the successors of balanced machines created at ZiD back in the 1980s. Thanks to the wide access to new materials, as well as the capabilities of modern technologies and industry, the plant in the Vladimir region managed to develop a line of balanced machines with new qualities. The main advantages of the A-545 assault rifle in Kovrov include better accuracy of fire, improved ergonomics that meet the requirements of the 21st century, and a higher rate of fire.

Both the A-545 and AK-12 assault rifles passed full-fledged military trials and were eventually adopted. But the models have their own characteristics, which make the two new Russian machines unique. At the same time, the military has no questions about the reliability of the models. Both machines have passed the tests with dignity. As noted in Kovrov, the A-545 and A-762 submachine guns are in no way inferior to their competitors from Izhevsk. 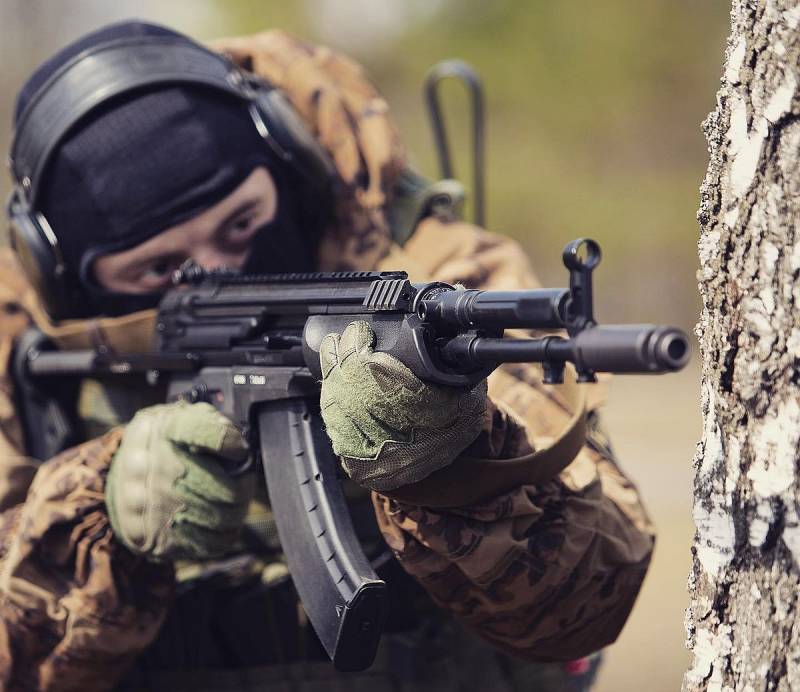 Photo of the plant named after V. A. Degtyarev

The reliability of the machines created in the Vladimir region and in Udmurtia is comparable. According to this criterion, the A-545 is in no way inferior to the updated model of the Kalashnikov assault rifle. Both machines were tested, including in difficult operating conditions in different weather: rain, frost, heat, and dusty conditions. They also threw the machine gun onto the concrete floor, simulating accidental falls and possible overloads. The weapon withstood all the “bullying” on itself and worked flawlessly.

The main advantage of the Kovrov A-545 submachine gun over the Izhevsk AK-12 is the accuracy of fire. It is for this indicator that the A-545 bypasses its competitor. The same applies to the model chambered for 7.62×39 mm, which is superior to the AK-15. They were able to achieve an increase in the accuracy of fire in Kovrov thanks to the balanced automatic scheme implemented in the model, which is considered the main “feature” of the Kovrov weapon. At one time, back in the 1970s, this scheme was proposed by Viktor Tkachov, who is an employee of TsNIITOCHMASH.

When firing from Kalashnikov assault rifles, the shooter and the weapon itself are affected not only by the impulse of the shot, but also by the impulse from the moving parts of the bolt group of the assault rifle. This translates into the fact that the barrel of the weapon when firing noticeably leads to the side. In the machines designed in Kovrov, the recoil impulse is effectively damped by using a special balancer-counterweight, which, after firing, begins to move towards the machine’s bolt carrier. This balanced automation on the A-545 model is especially good when firing in short bursts.

The officers who tested the Kovrov machine gun highlight its accuracy when firing from unstable positions. Thanks to this, the weapons of the Kovrov gunsmiths are excellent for solving combat missions in buildings and in an urban setting, when it is not completely known exactly where the enemy might appear from. Also, experts distinguish A-545 sighting devices in the form of a mechanical diopter sight. For domestic models of small arms, this is an unusual solution; an ordinary open sight is installed on the AK. At the same time, experts believe that a weapon with a diopter sight, although it requires some training from the shooter, turns out to be more accurate in operation. 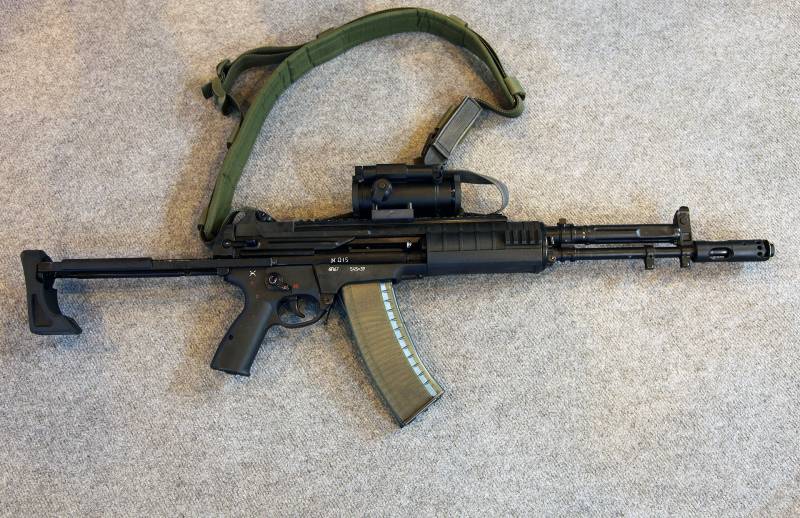 A-545: weapons are not for everyone

The new machine gun from Kovrov, precisely because of its characteristics, is not a weapon for everyone. It is more difficult to manufacture and more expensive than a Kalashnikov. That is why the Russian military did not initially plan to equip ordinary military units, often consisting of conscripts, with the new Kovrov machine gun. This weapon has its own niche today: special forces, scouts, soldiers of various special forces.

The Izhevsk AK-12 will remain a massive Russian assault rifle. There is no tragedy in this. The Kalashnikov assault rifle is widely known in Russia to almost everyone. It can be disassembled and assembled by any student who has not skipped OBZH lessons. But for the competent operation of the A-545, a more trained contingent is needed. An important point is that the Russian industry has long been familiar with all the nuances of the production of a Kalashnikov assault rifle, its production technology is well mastered and allows, in the event of a war, to organize mass production in a very limited time.

At the same time, in some sources today you can find data that the AK-12 is more effective than the A-545 when firing at a distance of more than 300 meters. This is achieved due to the more efficient firing of single cartridges from the Izhevsk machine gun. Whereas the Kovrov models are superior to the Izhevsk ones in the accuracy of automatic fire at a distance of up to 300 meters. At a greater distance, burst shooting becomes less effective. In any case, the presence of two modern assault rifles that have passed state tests and are put into service increases the variability, making it possible to equip units with weapons that are more suitable for solving specific combat missions.

The difficult fate of automata from Kovrov

Both Kovrov assault rifles, which were adopted by the Russian army, went through a very difficult and thorny path from idea to implementation and subsequent adoption. The real progenitor of the A-545 assault rifle is the AEK-971 assault rifle (Koksharov’s single assault rifle) developed in the Soviet Union. This model of small arms was developed by carpet gunsmiths back in 1978.

The AEK-971 assault rifle, designed by Stanislav Ivanovich Koksharov, was developed in Kovrov to participate in a competition announced by the USSR Ministry of Defense. The competition assumed the creation of a new combined arms machine gun and remained in history under the code name “Abakan”. The main requirement of the military for the new assault rifle was an increase in the accuracy of fire compared to the AK-74 assault rifle in service. The accuracy and accuracy of firing from a submachine gun created within the framework of the Abakan ROC needed to be increased by 1.5-2 times compared to the Kalashnikov submachine gun, especially when firing from the so-called unstable positions.

In the second half of the 1980s, the military preferred the AN-94, designed by Gennady Nikolayevich Nikonov. Despite this, work on a new machine gun in Kovrov continued. At the same time, the designers simplified the AEK-971, since many innovations in the Ministry of Defense were perceived as unnecessary for such an automatic weapon. The machine was modified several times, minor changes were made to the design. AEK-971 was produced in small batches until 2006, the main customer of the machine was various Russian security services.

Fully returned to the machine gun only in 2012, when work began on the creation of a complex of small arms for the new Russian set of military equipment “Ratnik”. As in the 1978 year, the A-545 assault rifle was created to participate in the competition for a new combined arms assault rifle. The first models were handed over to the military for military trials already in 2014. According to experts, the new A-545 assault rifle differed from the base model primarily in a different receiver design (the AEK-971 assault rifle has a removable cover). Another design of the receiver, which is non-removable, allows you to install a Picatinny rail on the A-545 assault rifle to accommodate a variety of sighting devices (optical and collimator sights), and also allows you to position the fire mode switch on the left or right side of the assault rifle.

As a result, in January 2018, the Ministry of Defense decided to adopt both the A-545 assault rifle and the AK-12 assault rifle along with their modifications in 7.62 mm caliber. The Kovrov A-545 assault rifle received the GRAU 6P67 index, and its 7.62-mm version was 6P68. According to the interlocutor of RIA Novosti, the production of the 6P67 submachine gun is already underway in Kovrov as part of a contract signed with the RF Ministry of Defense. However, it is currently unknown how many submachine guns the Russian military ordered. It is only known that the Ministry of Defense previously announced its plans to supply new types of small arms to the Airborne Forces by the end of 2020. Among the new products mentioned were the 6P67 5.45 mm assault rifles.