Since our beloved adversaries do not indulge in the innovations of their nuclear arsenal, we will be content for now with the products of the previous era – the W-80. Photo: flickr.com Kelly Michals

More recently, the United States announced that it could soon abandon the moratorium on nuclear testing, announced back in 1992, and conduct new underground tests at the Nevada test site. The announcement sparked regular concern over the fate of the nuclear nonproliferation regime, which is already falling apart under the onslaught of new nuclear countries. However, in addition to this, a purely technical question arises: what exactly is the United States going to test?

Any nuclear tests have both a political and a technical side. The political side of testing usually pursued the goal of demonstrating determination and demonstrating that a certain type of nuclear weapon was available and workable. The technical side of the tests boiled down to checking the new design of nuclear weapons to make sure that the product really has the required characteristics and gives the required energy release. So, if the Americans are going to conduct tests, then we can deduce from here that they have something new.

The program to modernize the American nuclear missile arsenal has already started and, judging by the press reports (containing a certain amount of misinformation), has already gained momentum. We are talking at least about a new type of missile – the cruise Long Range Standoff Weapon (LRSO), as well as three types of warheads. Two of them, W-76-2 and W-80-4, are the product of modernization of existing types, for ballistic and cruise missiles, respectively, and W-93 is a new model designed to replace the W-76-1 and W warheads. -88. 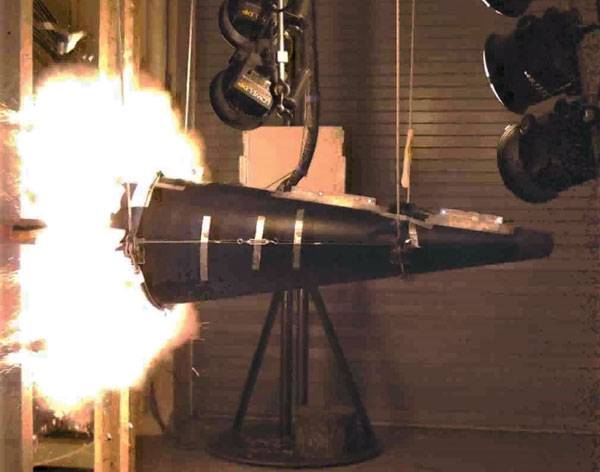 The W-76-2 is a low-yield warhead, its energy release, according to the Federation of American Scientists, is estimated at 5 kt. She was reportedly already in service, and the USS Tenessee (SSBN-734) submarine went to sea at the end of 2019 with one or two of the 20 missiles on board equipped with these warheads. According to the same federation, which is possibly a planned leak of information, the first such ammunition was manufactured in February 2019, and by the beginning of 2020 there were approximately 50 of them.

The W-80-4 is an extension of the service life and a partial upgrade of the W-80-1 warheads fitted to AGM-86B air-launched cruise missiles. These missiles are now the backbone of the American air-launched nuclear arsenal. Their stock is decent: 1715 missiles, for which 1750 warheads were manufactured. True, the missiles are already reaching the end of their service life, just like their B-52H carriers. The new LRSO cruise missile is being created for many carriers at once, in particular, for the B-2 and for the new B-21 bomber, and it should solve the main problems of updating this part of the US nuclear arsenal. According to the available data, it is planned to produce 500 W-80-4 warheads.

Little is known about the W-93 so far, although much has been written about it in early 2020. Most likely, it is intended to equip the Trident II (D-5) ballistic missile, which was tested again in September 2019. In the late 2030s, this warhead will have to replace the previous types of warheads. It should also develop the Mk-7 RV platform, which should have an increased ability to break through enemy missile defense. But so far almost nothing is known about her, at least in the open press.

Submariners must fight too!

An interesting question: why did the Americans need to arm nuclear submarines – carriers of strategic nuclear weapons – with a missile, in fact, equipped with tactical nuclear weapons? What is the point of such a replacement? American and not only American experts in the field of nuclear weapons are talking about some new strategy of responding to a nuclear attack with tactical warheads without inflicting a full-scale retaliatory or retaliatory nuclear strike. In any case, the National Nuclear Security Administration puts it that way. They say that the Russians can threaten us with low-power nuclear strikes in the expectation that the Americans will be afraid to respond, and we need a means of responding to this threat, comparable in scale, so that the exchange of tactical nuclear strikes does not develop into a large-scale battle.

Judging from the experience of the blessed times of the Cold War, such reasoning about strategy served as a means of covering up real intentions to use nuclear weapons and, to a certain extent, misinforming the enemy.

However, in my opinion, the actual goals of such a replacement of warheads are somewhat different. The fact is that while the US Air Force and the surface fleet were exhausted in the fight against all sorts of bearded men in the Middle East, unleashing cruise missiles and guided aerial bombs on them, American submariners shied away from this honorable duty. They devoured a hefty state treasury, plowed the underwater expanses of the oceans, in fact, doing nothing useful for the current American military tasks. I think that the command of the US submarine fleet has been approached more than once with demands to cut in, but the submarine admirals answered something like this: we do not mind to hit, but you are sure that a 455-kiloton warhead strike on some bunker or other target in the same Syria – is that what the world community expects from you? So after all, you can inadvertently wipe the whole city off the face of the earth.

In addition, in a number of countries hostile to the United States, such as Syria or Iran, quite decent missile defense systems have appeared, which seriously reduce the effectiveness of cruise missile attacks.

The appearance of a tactical warhead in service with the American submarine fleet is precisely the solution to this problem. Submarines can now, if necessary, deliver a surprise and almost irresistible strike against an important target in a regional conflict. 5 kt is not much, a nuclear explosion will have a small radius of destruction, about 150-200 meters. This excludes or makes it unlikely unnecessary casualties that could be hit by a nuclear attack along with a military purpose, if powerful warheads are used. For an attack on an airfield, on a command center or on the position of missile defense or ballistic missiles, such a tactical warhead is most suitable. 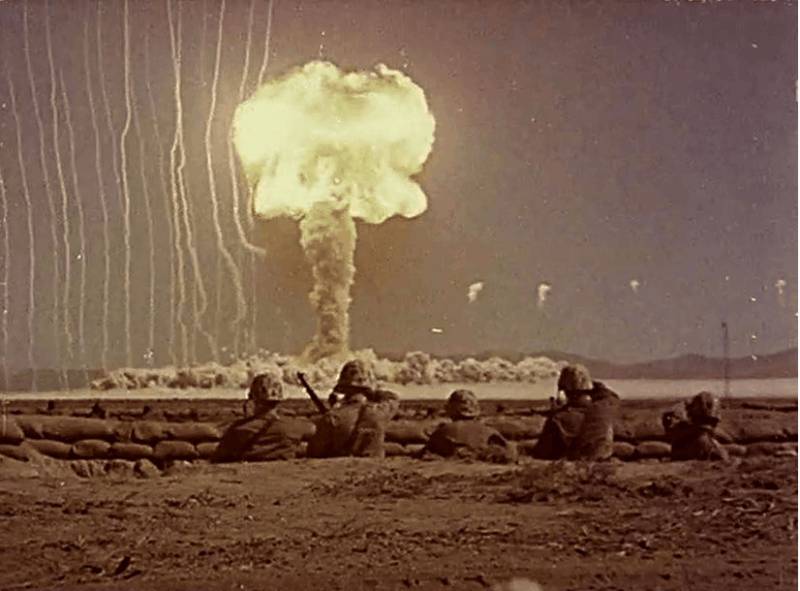 Textbook photograph showing the capabilities of a tactical nuclear explosion

In a regional conflict, such as, for example, the war with Iran, fifty tactical nuclear warheads are quite capable of either breaking or greatly weakening the missile defense system and aviation, which will ease the burden on aviation and make its strikes much more effective. As for Russia and China, the radars they have allow them to determine the trajectory and find out that these missiles pose no threat to them even if there is no preliminary warning (there may well be a warning about this strike). 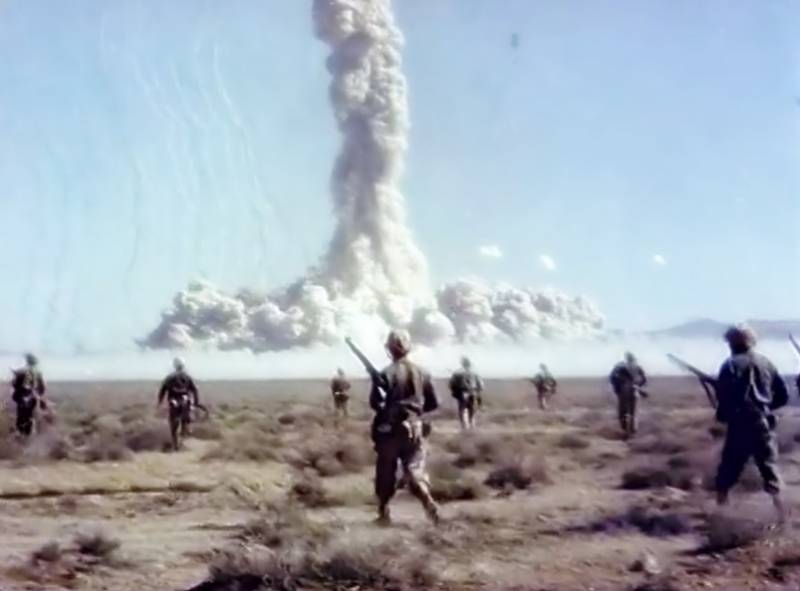 Regional war with tactical nuclear strikes promises to be spectacular

Will the new generation of designers be able to “kick the bucket”?

Judging by the fact that the W-76-2 warhead was immediately placed on missiles and loaded onto a boat, the American command has no doubts about its performance. What then can they experience?

I think that they need to test the new W-93 warhead, which may significantly differ from the previous types in its design and electronics. Here is the problem, which has already been noted by some experts. The old generation of designers and engineers, in whose ability to “screw up” there was no doubt, has actually gone; the youngest employees who worked in the era of nuclear testing are already retired. The ammunition they created will, of course, explode if you dust off the sacred tablets of the Cold War and do as it says. But whether the current generation will be able to do something capable of banging is a big question. If not, then the problem arises that in 15-20 years the United States may be left without workable nuclear weapons at all and the consequences will be catastrophic. Some DPRK will be able to threaten them with impunity.

Then, in the United States, there is clearly a drift from powerful charges to low-power (tactical) charges, which should be equipped with high-precision maneuvering warheads not only of ballistic missiles, but also of hypersonic missiles, as well as anti-missile missiles of the ABM system. The more accurate and the more intelligent the warhead, for example, capable of not only maneuvering, but also selecting targets on the approach, and automatically adjusting the detonation power depending on the location of the targets, the more compact the charge itself should be. For example, if the enemy ships are in a heap, then it is better to have a more powerful explosion, and if the order is dispersed, then you need to hit accurately, but weaker. For example, for a Chinese aircraft carrier, a direct hit by a 5 kt warhead means guaranteed sinking. For a warhead, the mass and size characteristics of which are very strictly limited, the placement of additional electronics and devices means a reduction in the size and weight of the nuclear charge itself. Therefore, the requirements for the design of such compact charges are increasing and the question arises about their performance.

Therefore, despite the reassuring assurances that nuclear tests are not planned and they are not needed, I think that such tests are still planned and will most likely take place in the foreseeable future.