For a war by new rules

In the previous part of the story about KamAZ-4310, it was a question of armored versions of the biaxial modification 43501. This article will focus on heavier off-road vehicles under the KamAZ brand.

The need for armoring machines of the 4310 series and Ural-4320 analogs first appeared at the turn of the 80-90s of the last century. The so-called “local wars” and “hot spots” showed the inability of army vehicles to the new rules of war. This was encountered both in the army combat units and in the internal troops. At that time, the industry had neither the time nor the money to create full-fledged MRAPs like Buffel or Casspir from scratch.

Therefore, it looked quite logical to revise standard army KamAZ trucks according to the requirements of the time. Nobody was going to turn the vehicles into “transport-combat” – for this purpose there were infantry fighting vehicles and armored personnel carriers. Armored cars had to withstand shelling from the most common small arms with a caliber of up to 7.62 mm inclusive, as well as the detonation of light ammunition. 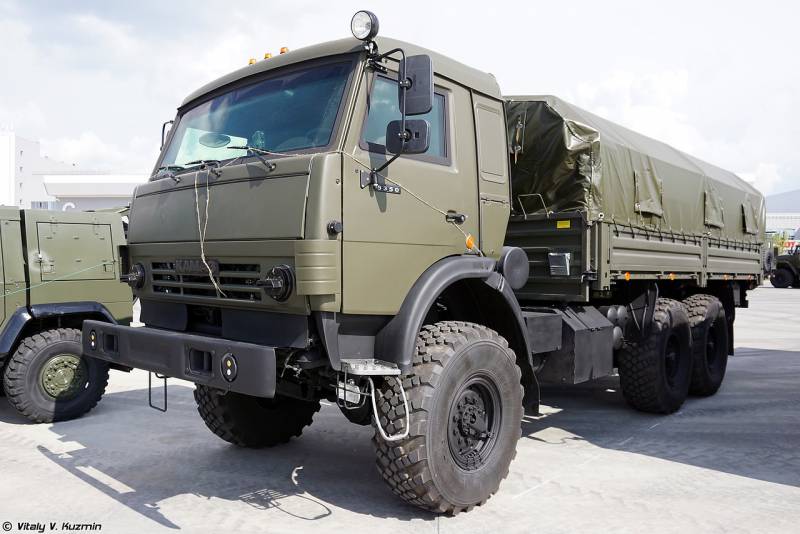 The landing armored module MM-501 in the back of the “Mustang” is hidden by an awning from prying eyes. Photo: Vitaly V. Kuzmin, vitalykuzmin.net

One of the most advanced armored KamAZ trucks are SBA-60 trucks on chassis 5350, which can accommodate 12-14 soldiers with full combat gear.

The model was developed by the Zashchita corporation in 2011-2012. A distinctive feature of the truck was a hidden armoring kung with mine protection elements – a V-shaped bottom and shock-absorbing suspension seats that exclude contact of the legs with the floor. In a shortened version with front and rear doors, the SBA-60 was designed for 12 fighters, and in an elongated version with one rear exit for 14.

For comparison, the bonneted Ural could take no more than 12 fighters into the SBA-56 armored car – the shorter length of the cargo platform affected. However, the drivers of the Urals could feel safer. Firstly, the location of the cockpit behind the engine compartment protected from mines. And, secondly, the motor enclosed in an armored capsule partially protected from the frontal small fire.

Developers of the SBA-60 series held jointly with the Central Research Institute of Traumatology and Orthopedics. N.N. Priorov, a series of experimental explosions using pigs and rabbits as experimental ones. Studies have shown that such armored vehicles can withstand up to 6 kg of explosives in TNT equivalent. A very decent result for cars of a similar design and class.

The anti-bullet protection of the structure protected the fighters from the 7.62-mm rifle cartridge with a heat-strengthened SVD or PKM core. The armor could withstand firing from such weapons from a distance of 10 meters. In addition, the mine protection of the KamAZ-5350 cabin provided resistance to 2 kg of explosives. However (due to the design features) it did not allow full armoring of the 6th class motor. 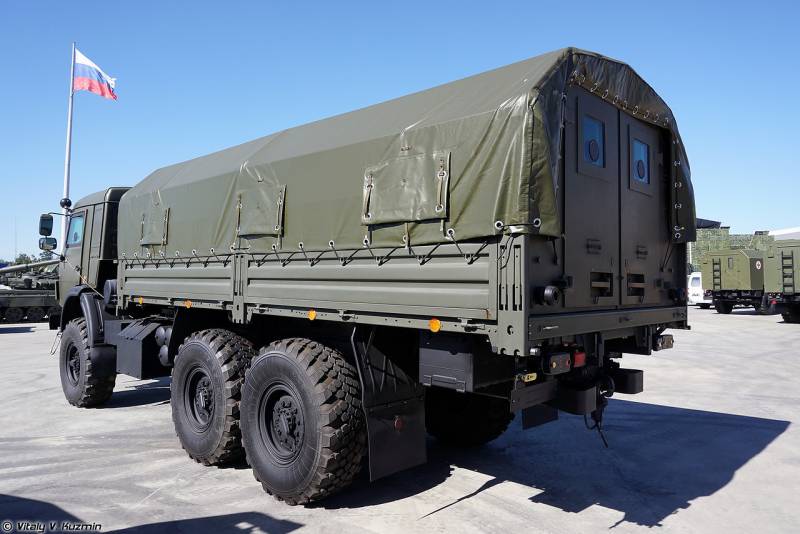 The landing armored module MM-501 in the back of the “Mustang” is hidden by an awning from prying eyes. Photo: Vitaly V. Kuzmin, vitalykuzmin.net

One of the most important qualities of armored wheeled special equipment should be the secrecy of the installation of protection. When a vehicle deliberately hung with armored panels with loopholes moves in a convoy of military equipment, it forces the attackers to pay attention to themselves, first of all, and also to select larger calibers for firing.

In full compliance with these requirements, in Naberezhnye Chelny, the Asteys company has been producing KamAZ trucks with MM-501/502 armored modules for many years. The armor of the modular box corresponds to the 5th class of ballistic protection and has the shape of an awning frame, which makes it possible to disguise the car as an ordinary truck.

If necessary, the MM-501/502 module can be dismantled and installed as an impromptu checkpoint. Eight loopholes, three on each side and two in the doors, will help keep the defense for some time. The MM-502 module differs from the 501, reduced from 5190 mm to 4650 mm in length with a constant “passenger capacity” of 14 soldiers.

Despite the fact that the developers declare mine resistance, there is no need to talk about its effectiveness. The bottom of the armored module is flat, and the seats are rigidly attached to the floor, significantly increasing the likelihood of injury to soldiers when detonated even without damage to the armor. However, for truly “hot” spots, KamAZ has more advanced machines.

The evolution of domestic lightly armored vehicles in the late 90s made a dizzying somersault, turning 180 degrees. It turned out that the floating BTR-80 is not entirely suitable for a war against semi-partisan formations. And the machines of the already forgotten families BTR-152 and BTR-40 are best suited for this role.

First, such armored personnel carriers are much cheaper than floating vehicles designed for nuclear war conditions. Secondly, they are more convenient and allow you to transport more soldiers. Thirdly, the bonnet arrangement has proven itself to be the most resistant to detonation. No one, of course, was going to return to the ZIS-151 and GAZ-63 platforms, which became the bases for the post-war BTR-152 and BTR-40, respectively. Initially, a two-axle KamAZ-4326 with a 220-horsepower engine was taken as the basis. 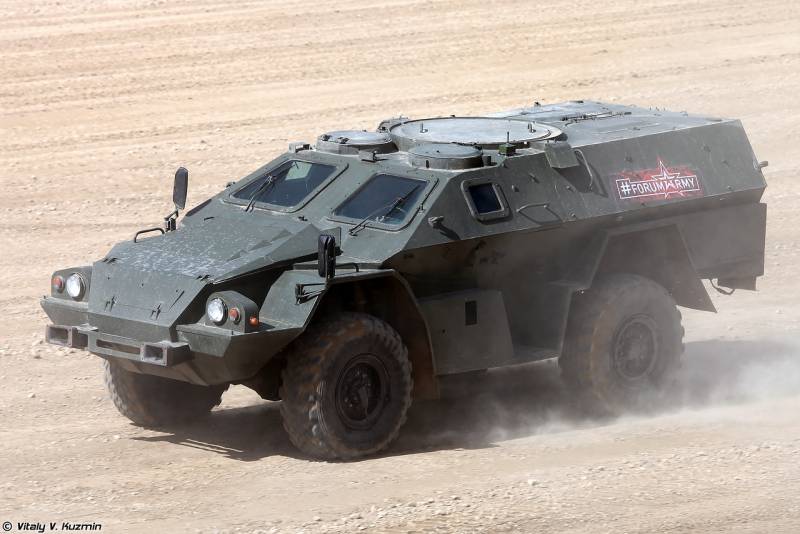 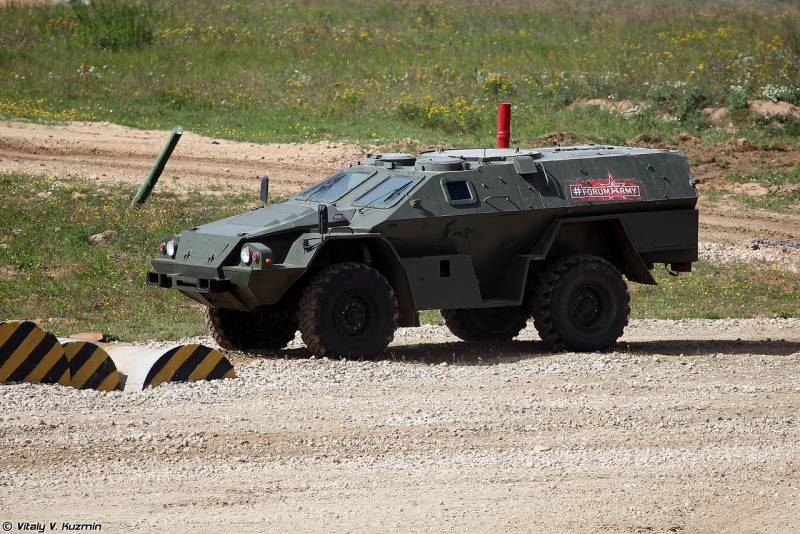 In 1997, on the basis of the truck, an experimental BPM-97 was built, the head developers of which were the Research and Production Center “Special Machine Building” of the Moscow State Technical University named after N.E. Bauman and the Research Institute of Steel. The Kurgan Machine-Building Plant welded a carrying armored vehicle for 8 people and with a rotating turret with a 12.7-mm machine gun.

Three years later, a version of the BPM-2000 appeared with a 14.5-mm machine gun and a 260-horsepower diesel engine. A small batch of armored cars went to the Border Troops, but did not gain fame there due to the poor quality and inconvenience of operation. Later, the car was renamed KamAZ-43269 “Shot”, slightly modernized (in particular, one piece windscreen armored glass was installed on some of the cars) and only in 2010 was it accepted for supply to the Russian army.

But by this time it had already become obsolete – poor visibility, cramped interior, inconvenient entry and exit, poor booking and low explosion protection for its time affected. 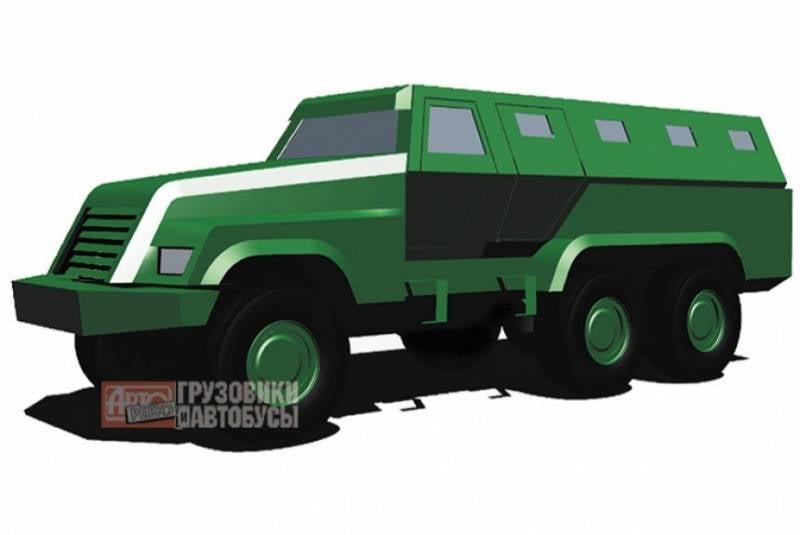 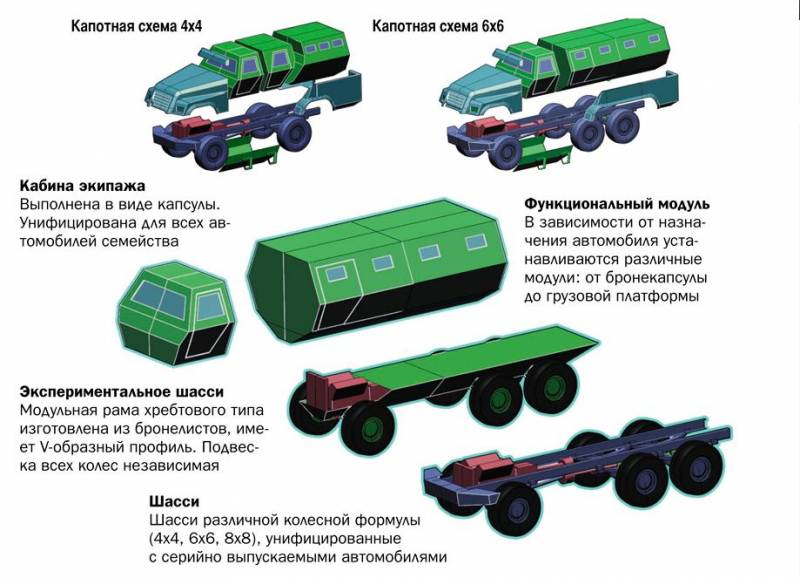 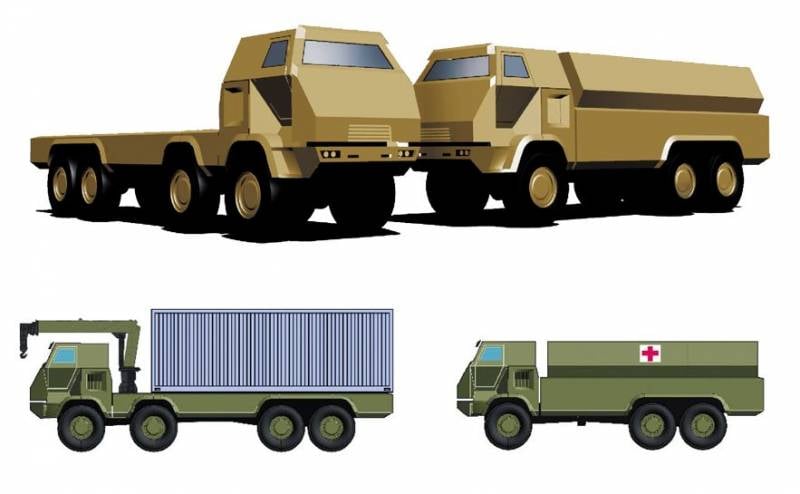 In 2009, the Kamsky Automobile Plant began a deep modernization of the two-axle armored car. The theme received the conditional code “Shot-2” and was conceptually worked out by the Chelny company Avtodesign. This was an initiative idea of ​​KamAZ, which was counting on orders from the Ministry of Defense.

It should be noted that Vystrel was not just modernized, but turned into a whole family of armored vehicles based on three- and four-axle Mustangs. Initially, both bonnet and cabover vehicles with a wide range of modular bodies were planned. But the project would be closed due to the beginning of the development of machines of the Typhoon family. 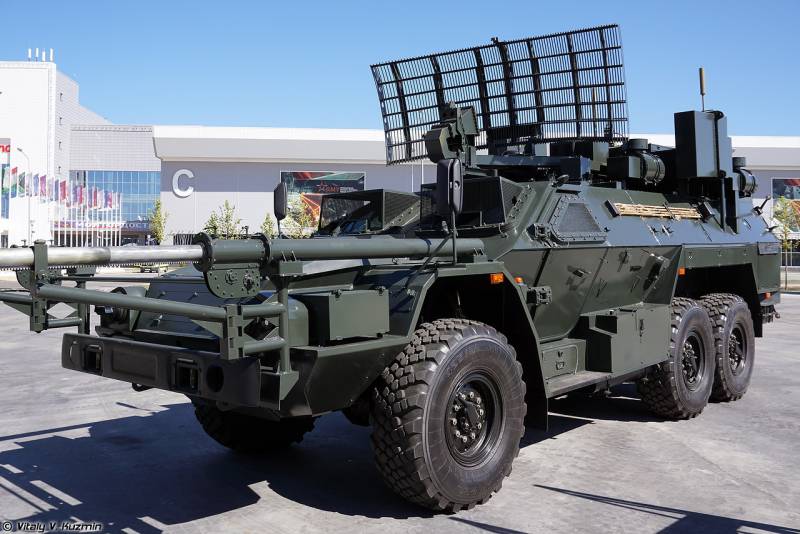 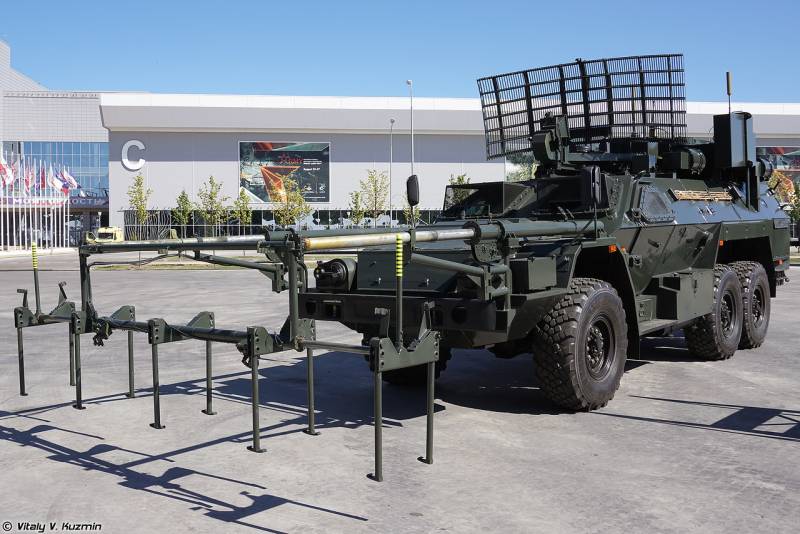 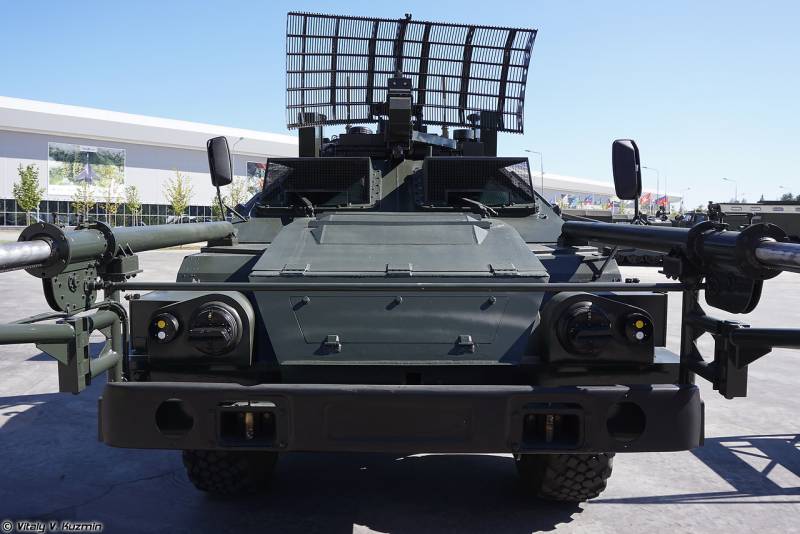 The ideas laid down in the ROC “Shot-2” were partially implemented in the aforementioned corporation “Zashchita”, when in 2012 the SBA-60-K2 “Bulat” armored car was demonstrated.

The car was built around the KamAZ-5350 (43118) chassis, reshaping it for the bonnet layout. According to Zashchita, the development was carried out taking into account the opinion of the officers who fought in the hot spots of the 90s. Initially, the armored car was intended for the internal troops. And the very first copy was given to the Sakhalin OMON, working in the North Caucasus. “Bulat” is fairly well protected in the 6th class from small arms and shrapnel, but not in the best way protects against mines and IEDs. 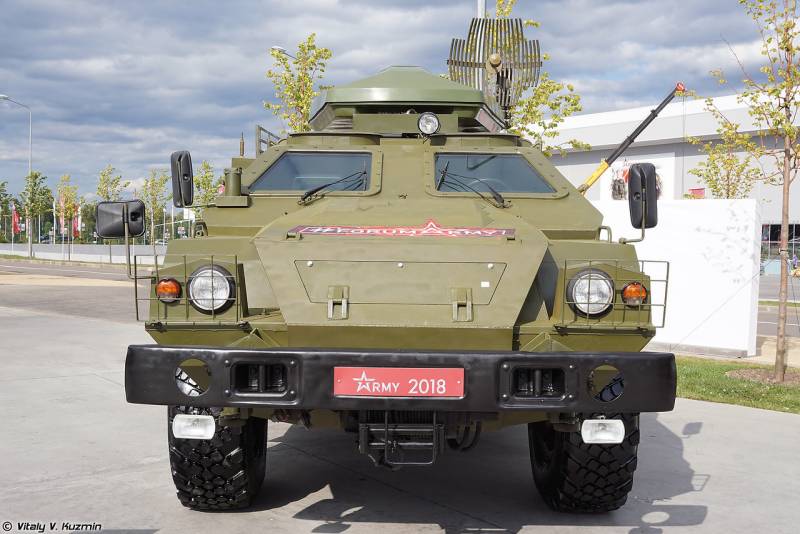 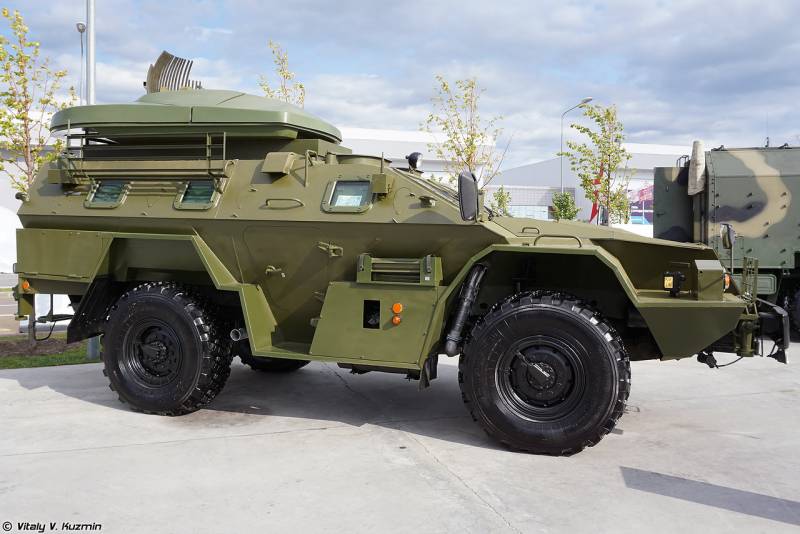 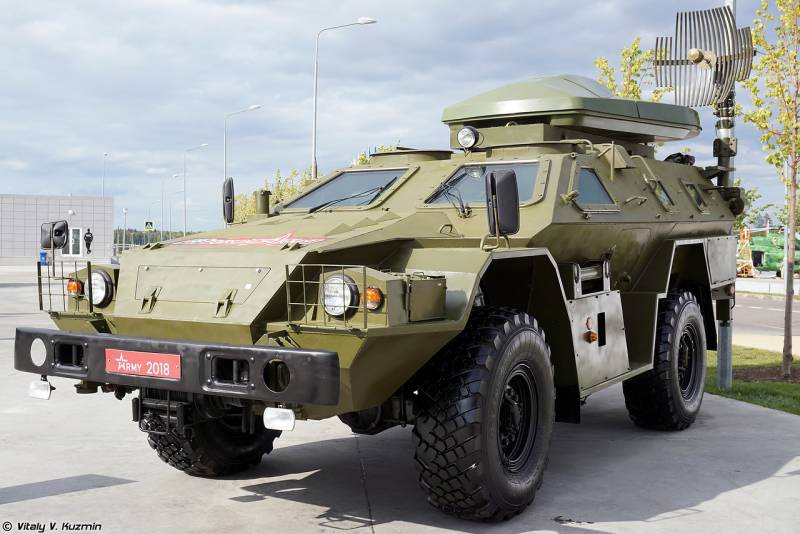 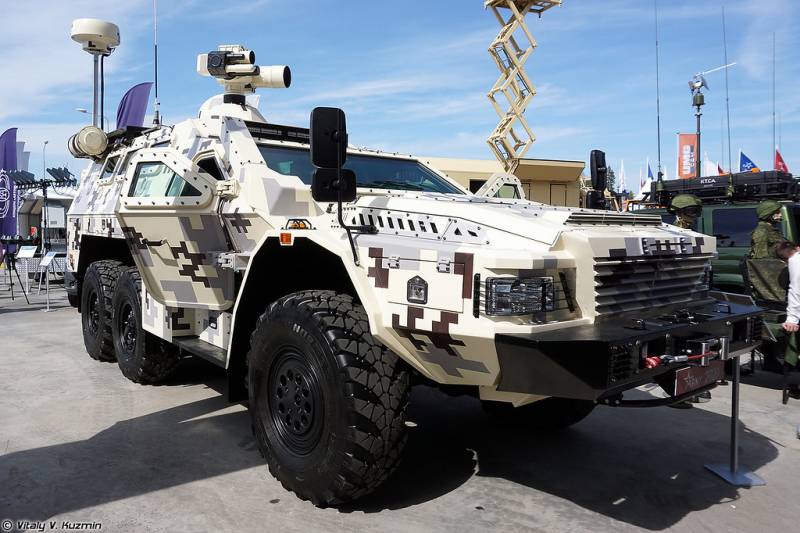 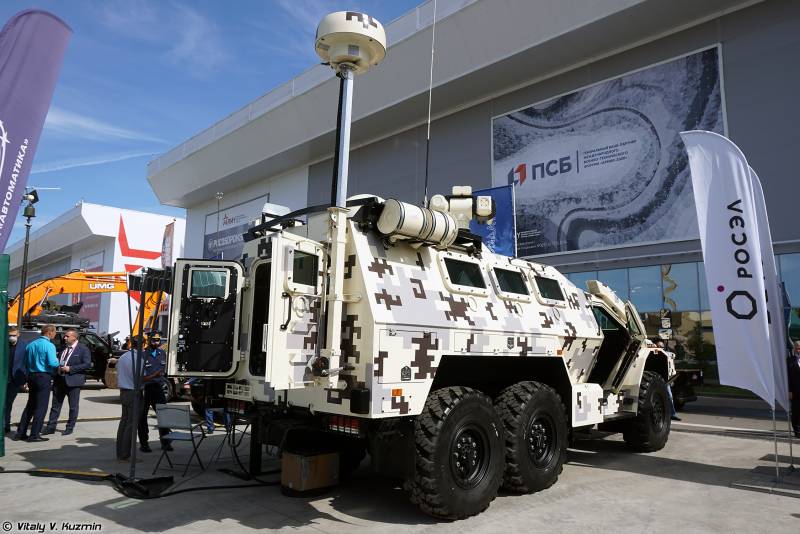 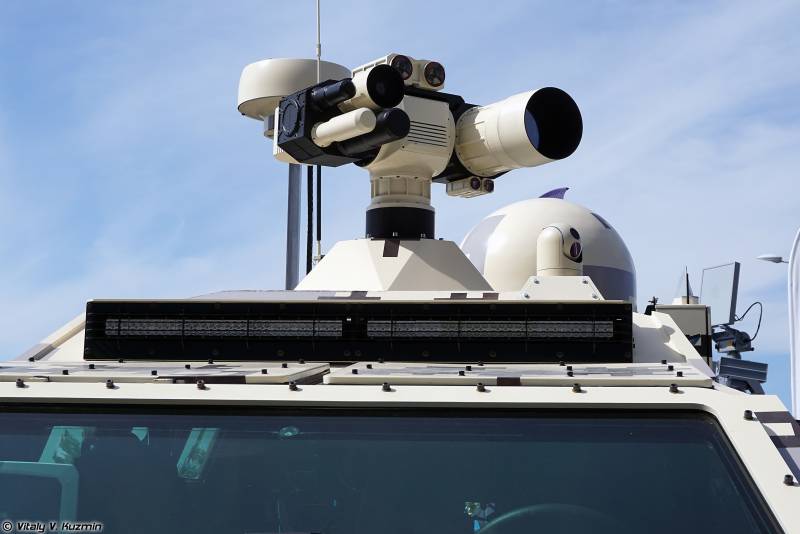 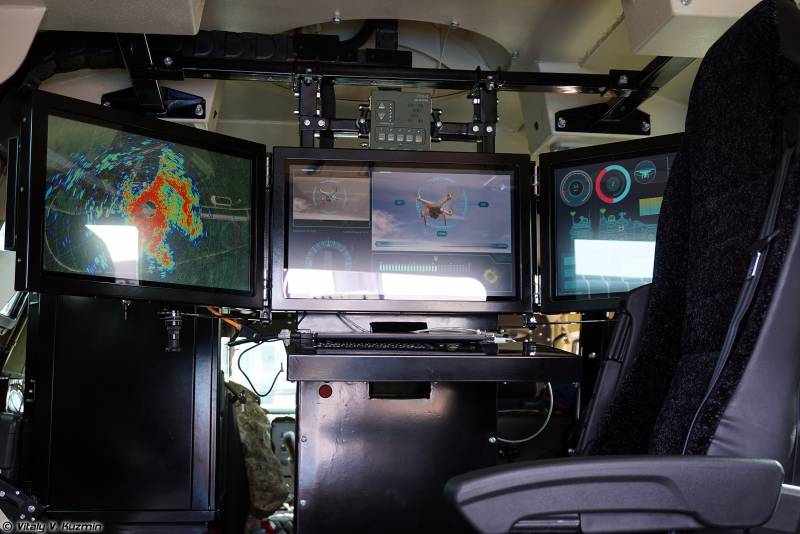 Despite the fact that the body resembles a V-shaped profile by contours, and the troops are placed on shock-absorbed seats, the armored vehicle can withstand no more than 2 kg of explosives in TNT under the wheels.

The reason for this is the relatively weak armor of the bottom, and the too low silhouette of “Bulat” – the blast wave simply has nowhere to scatter. Nevertheless, both Vystrel and Bulat have found their niche in the Russian army.

In addition to the direct function of delivering soldiers to the front, armored cars are used as mobile control points for UAVs, as well as to suppress drones.

In the Strategic Missile Forces, the vehicles have found their application as part of the 15M107 “Foliage” remote demining complex.