Weapon safety can be achieved in a variety of ways. One of the most original solutions was proposed by the American designer Gerard J. Fox in his line of carbines for pistol cartridges. This weapon, intended for the police, other structures and civilian shooters, had a set of fuses and even a combination lock.

From replicas to the original

The history of J. Fox carbines dates back to the mid-sixties. During this period, the Eagle Gun company, founded by Bill Ordner, developed several carbines for pistol cartridges. The Eagle products were based on the design of the M3 submachine gun, but outwardly resembled the Thompson and other well-known models. The production of carbines was ordered from a third-party enterprise.

In 1967, Meriden Firearms began selling Eagle products. Its head, Jerry Fox, began pushing for the development of new weapons with broader commercial prospects. The controversy continued for a couple of years, until in 1969 a fire broke out at the production of “Needles”, which destroyed part of the resources and equipment. Prospects for cooperation were called into question. 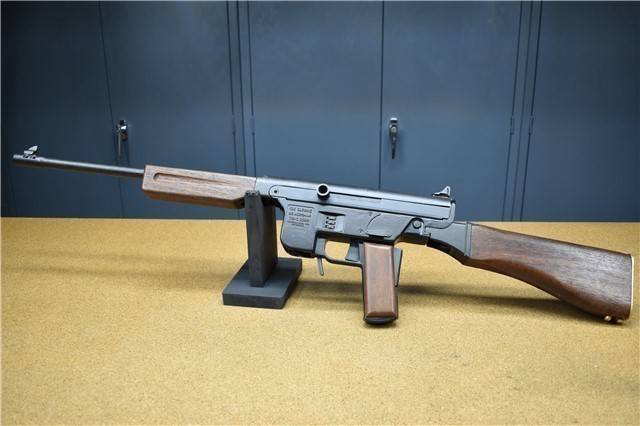 View from the other side. Photo Gunbroker.com

Fox and Ordner did not give up and decided to resume production. They brought in businessman John Hoover and, with his help, founded a new company, Tri-C Corp. and started developing new weapons. This time it was planned to create a completely new sample, similar to others only with applied ideas and solutions.

In 1971, J. Fox and his colleagues completed the development of a new weapon in 1971 and immediately patented individual structural elements. Soon a full-fledged prototype appeared under the obvious name Fox Carbine.

The project provided for the creation of a carbine for a pistol cartridge specifically for law enforcement agencies. This purpose predetermined the presence of characteristic features – additional blocking of the trigger mechanism and auxiliary special equipment. 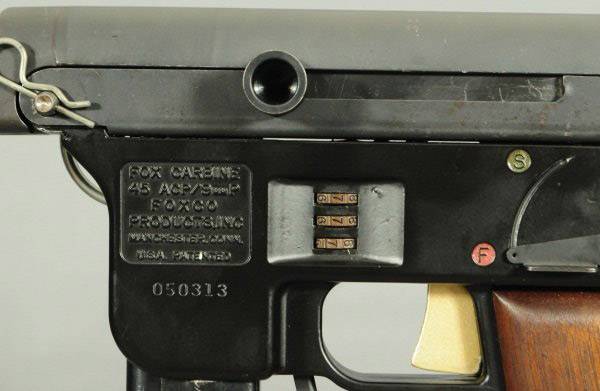 The carbine was built according to a linear arrangement with an automatic mechanism based on a free shutter operating from a rear sear. The product had a breakable design with an upper receiver and a lower trigger casing. Some of the parts were made of aluminum. Provided for a fixed stock, forend and wood grip.

Fox Carbine could be built chambered for 9×19 mm Para or .45 ACP. Regardless of the ammunition, a replaceable rifled barrel with a total length of 16 7/8 inches (428 mm) with a muzzle brake was used. A barrel with a silent firing device installed on it was developed.

The free shutter automation was based on the design of the Soviet PPSh. A massive rectangular shutter was used, behind which was a reciprocating combat spring. At the rear wall of the receiver there was a polymer buffer for damping shocks. The shutter had a replaceable cylinder with a cup for two types of cartridges, which simplified production.

The trigger mechanism provided locking the shutter in the rear position before firing. Three fuses were provided at once. On the left side of the casing there was a safety-translator flag, and an automatic safety button was located on the rear of the pistol grip. In front of the trigger guard, a mechanical combination lock with three digits was inserted into the casing. Number rings were displayed on the left side of the weapon. 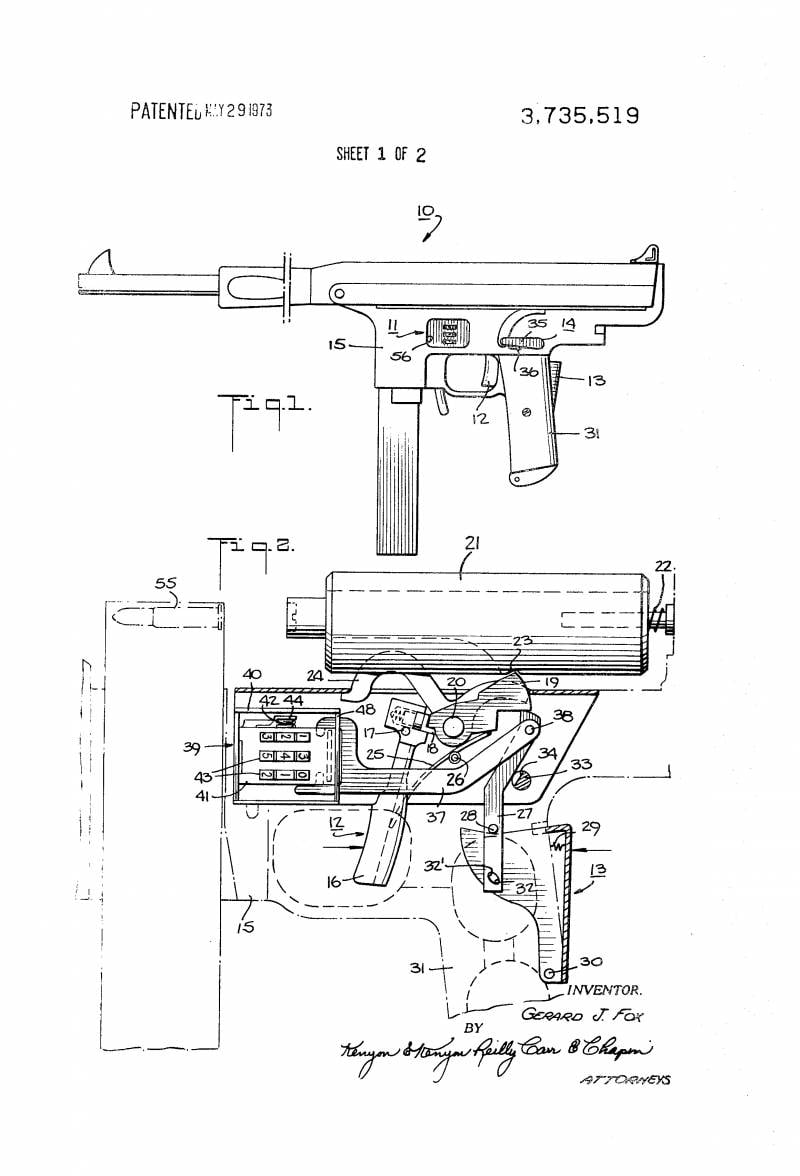 Drawing from the patent – trigger locked with a lock

The coded and automatic safety catch used a common system of levers and locked the bolt in the rear position, preventing the release. It was assumed that the key on the handle would exclude accidental shots when falling, and the combination lock would not allow a stranger to use the weapon.

For the carbine, two variants of trigger mechanisms were offered, one allowed only single fire, the second allowed bursts of fire. The necessary elements of the mechanism were made in the form of a removable block. According to the advertisement, the replacement took only 63 seconds.

The submachine gun was equipped with box magazines of different capacities. The magazine for the .45 ACP held 30 rounds, for the Parabellum – 32. The magazine was placed in the shaft in front of the combination lock and was fixed with a rear latch.

Open sights were placed on the barrel and box. Effective firing range – no more than 150-200 m. As an additional option, sight illumination means or a full-fledged night sight were offered. 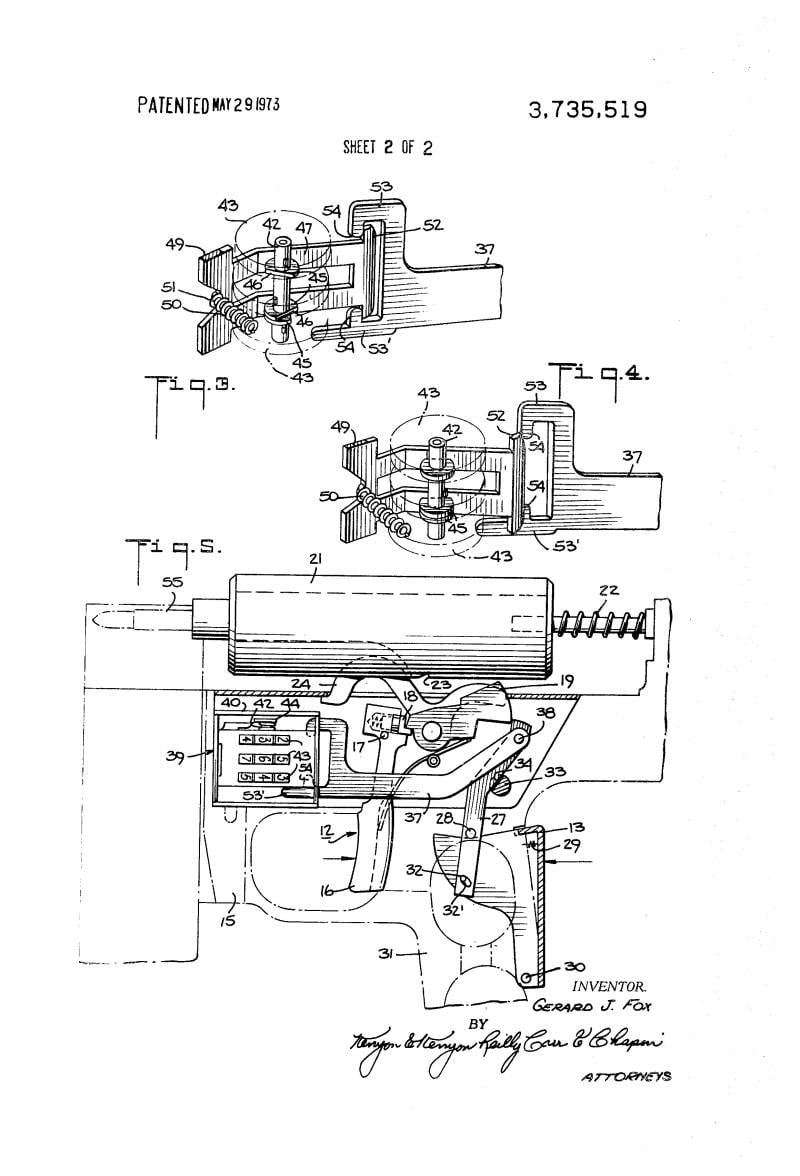 USM is unlocked and can fire

Fox Carbine could be equipped with a removable wooden stock. At the same time, a special version of the butt was offered, which expanded the capabilities of the weapon. This butt had a cavity for mounting the battery. With the help of a cable, a truncheon with an electroshock device was connected to it.

The total length of the carbine for the police reached 910 mm, with the stock removed – 665 mm. The mass of the weapon with a butt and without a magazine is 3.5 kg. With an “automatic” trigger, a technical rate of fire of 675 rds / min was achieved.

In the early seventies, Tri-C began trying to find customers for the newest Fox Carbine. As originally planned, it was offered to various police departments and other security forces. As undoubted advantages, they were given rather high fighting qualities, the presence of a lock for blocking and the ability to install various accessories. Some organizations might be interested in a carbine with a built-in shock. 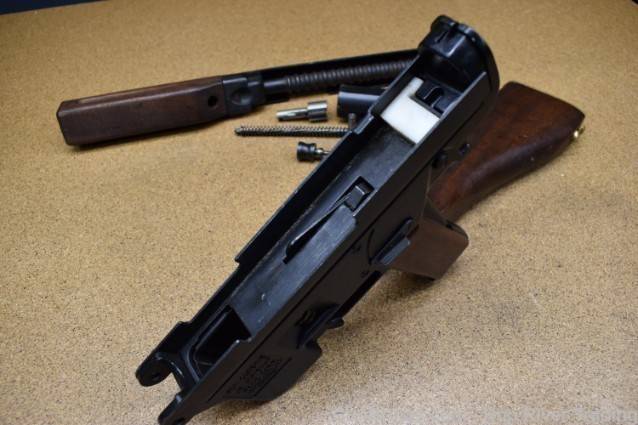 The trigger casing is separate from the weapon. Photo Gunbroker.com

The company received several small orders and began mass production. However, the earnings turned out to be small, and the Tri-C barely kept afloat. She coped with the recession of 1974-75, but already in 1976 a fire broke out in production. Further activities proved to be impossible.

Jerry Fox made a fresh attempt to start production. Literally in his own garage, he deployed FoxCo, which was able to produce a small batch of weapons and ship them to customers. Then they managed to get several new orders – weapons in a simplified configuration went to stores for sale to civilians. Income from new sales over time provided expansion of production and allowed an increase in production rates.

FoxCo collected Fox Carbine until 1980. During this time, approx. 1,500-2,000 weapons, although the exact number remains unknown. Known serial numbers for surviving Tri-C carbines range from 000001 to 000694. FoxCo began production with 050001; the latest known is 051250. The complete list of customers is not available and is likely lost. 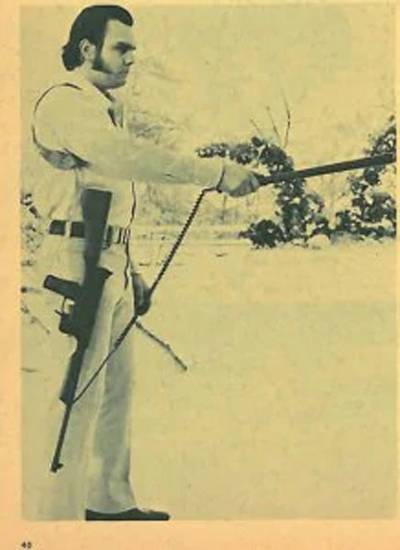 Carbines are not for the police

The Fox Carbine had little success among police departments, but sold well in the civilian market. In the early eighties, it was decided to develop a new version of the weapon and expand production. To this end, FoxCo signed an agreement with the Dean Machine Company.

Based on Fox Carbine, a simplified TAC-1 product was developed that meets the requirements of the civilian market. It did not have an auto-fire, was not equipped with a muffler or a shocker, etc. In 1981 it was introduced to the market under the Demro brand. Soon, four modifications of this weapon appeared with different features and characteristics. In particular, some were positioned as full-fledged submachine guns. A set of three fuses, including a combination lock, was not used on all samples.

The original system of protection against unauthorized access received different ratings. Not all buyers considered a combination lock necessary, which often affected their choice when buying. Except for this node, the TAC-1 had no major differences from other products in its class on the market, not to mention decisive advantages. 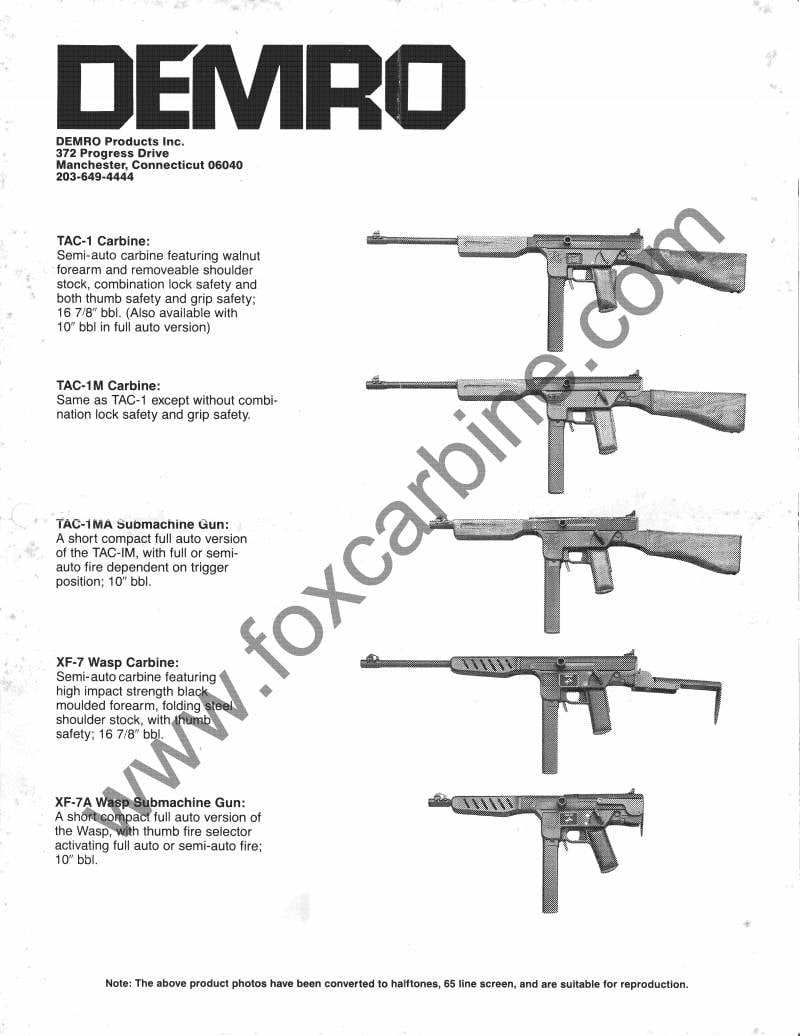 In 1983, production had to be curtailed due to a change in legislation. There were new restrictions on blowback weapons, and the commercial prospects of the TAC-1 were sharply reduced. Further release of the carbine was considered unprofitable.

Only a few US law enforcement agencies have ordered Tri-C carbines in different configurations. There is information about the production of both simple weapons and those reinforced with electrical equipment. However, the total volume of production remained small and carbines were not widely used. The success in the civilian market was better, but even here FoxCo and Demro did not become leaders.

Thus, the original design solutions predetermined the characteristic appearance of the promising sample, but did not help it advance in the market. Since then, various companies have repeatedly tried to create weapons with additional security means – and not a single such sample has become widespread. The main reason for this was almost always the lack of real advantages over samples without locks or other devices.